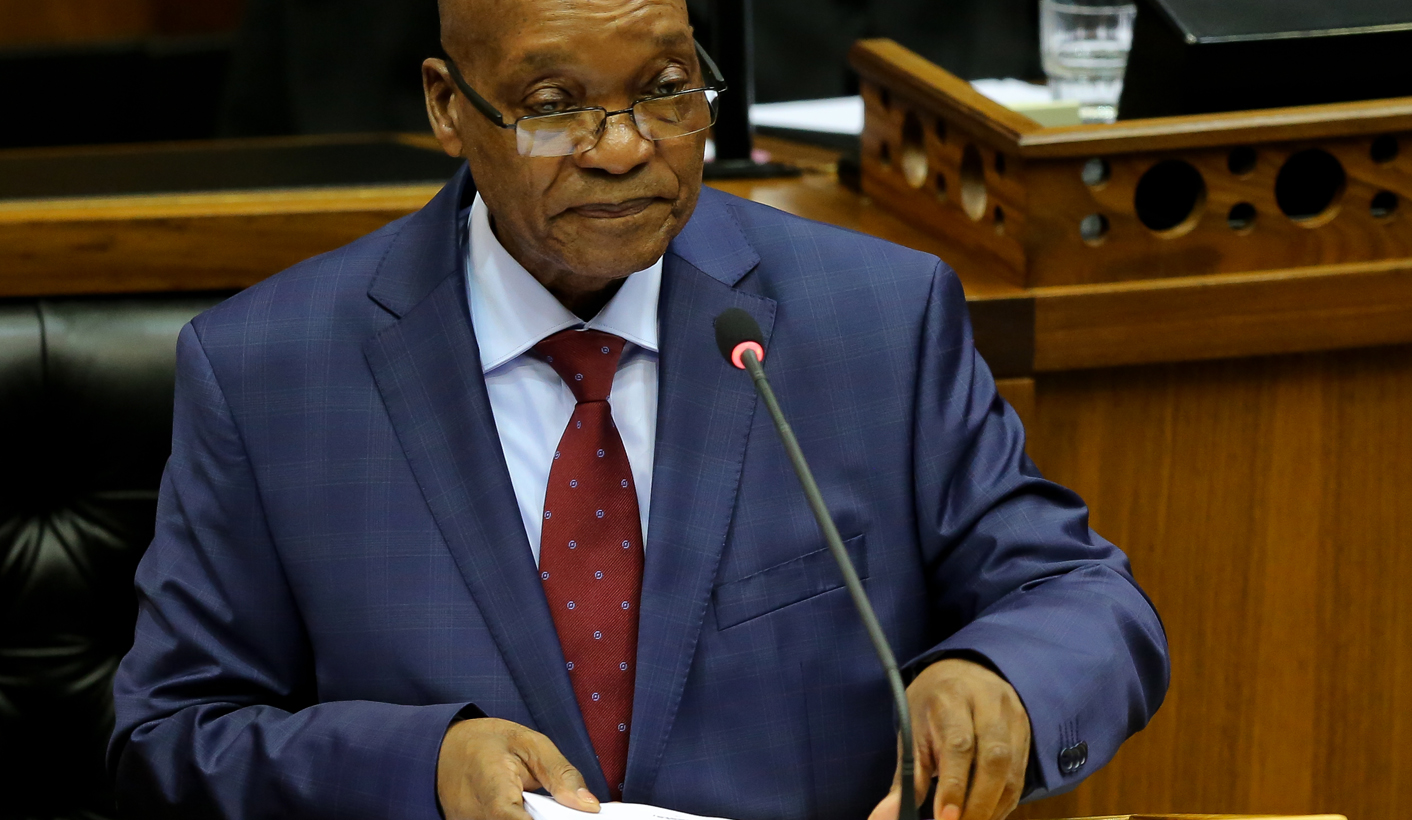 Tuesday’s State of the Nation proceedings went off in a decidedly lacklustre fashion. Sure, there was all the usual pomp and ceremony: gun salutes, a red carpet, fancy outfits. But the spirit of the evening just seemed a little – off. Maybe it was the cold and dark. Maybe it was the rumours swirling about the president’s ill health. Or maybe it was just that nobody could get too worked up about an event that we already staged in full just four months ago. By REBECCA DAVIS.

It wasn’t like anyone expected much from the second SONA of the year. It feels like we just did it – the first one was in February – and yet here we were again, clustering around the red carpet waiting to yell for the attention of parliamentarians decked out in their finery.

Cape Town had actually put on a decent show, weather-wise, for mid-June. TV stations had feared that heavy rain would scupper their broadcast plans, but blue skies prevailed. By late afternoon, however, when MPs made their way into the National Assembly, it was already getting decidedly chilly. When they emerged after Zuma’s speech, it was into a cold, dark Cape winter evening. MPs didn’t have the customary lavish banquet to head off to, either; a more modest cocktail function followed, with hard liquor reportedly off the menu.

Still, individual parliamentarians seemed in high spirits on arrival. Many are still adjusting to fresh or revised roles. “Everything is new – including my department,” beamed Deputy Communications Minister Stella Ndabeni-Abrahams. Former ANC national spokesperson Jackson Mthembu, taking up a new role as an MP, joked to the Daily Maverick that he should be referred to as “Honourable” from now on.

And then there were the new kids on the block. The DA’s Mmusi Maimane, who joins Parliament for the first time with the hefty challenge of the opposition’s parliamentary leadership on his shoulders, wasn’t betraying any nerves on the red carpet with his wife Natalie. The two even obligingly kissed for the cameras, though Maimane grumbled amiably: “I felt suckered there.”

EFF MPs arrived in their trademark workers’ gear, with one female MP in a cook’s outfit, while Central Command member Magdalene Moonsamy’s black coat concealed a domestic worker’s uniform beneath it. But the EFF fighters were having none of the red carpet banter, seemingly having agreed in advance to stride purposefully into the event as a sign that they eschewed its frivolous trappings. A number looked uncertain which way to go. “They don’t know, shame, they’re new,” three actual workers – from Parliament’s catering corps –  commiserated.

The EFF cohort maintained their stern approach within the National Assembly. They did not stand to applaud the arrival of Premiers, Speakers or Deputy President Cyril Ramaphosa. They certainly did not stand to applaud the arrival of President Zuma, or the conclusion of his speech. Clapping of any sort was not on the cards for Julius and the gang. Malema sat impassively for much of the proceedings, with Floyd Shivambu doing the note-taking. Black Consciousness writer Andile Mngxitama occasionally made a show of laughing scornfully at Zuma’s promises.

Eyes were fixed more attentively on the president than normal, given his recent attack of ill health. It’s customary for the president at these events to walk a fair distance within the parliamentary precinct, greeting schoolchildren and others imported for the occasion. This time round Zuma was ferried in a bus much closer to the entrance of the National Assembly.

Zuma walked slowly, at one stage reportedly being supported by Speaker Baleka Mbete, and appeared to have lost some weight. On taking his seat initially, he nodded a brief acknowledgement to new DA parliamentary leader Maimane, seated directly opposite him. To say that Zuma seemed “frail” would be an exaggeration, but in both his walking gait and his speech delivery he did appear to be lacking a certain spring in his step. Oldest wife MaKhumalo was notable in her absence from proceedings. Seven State of the Nation addresses later, perhaps she’d simply had enough.

Though the physical presence of the president may have lacked energy, his speech made mention more than once of “radical transformation” – in specific reference to South Africa’s energy sector and economy. There was, however, little that could be considered radical in its proposals.

Afterwards, in the slightly chaotic space where politicians are buttonholed by journalists for their reactions, opposition figures from across the board condemned Zuma’s address for its lack of ambition. “We wanted more bold steps,” Maimane said, adding that “it appears that President Zuma is living in one space while South Africans are in another”. A formal statement put out by Maimane subsequently described it as “deeply worrying” that Zuma’s speech had failed to directly address the recent downgrading of South Africa’s credit rating.

Zille was also giving out unimpressed vibes, saying that it was “critically important” to improve the living conditions of miners, as Zuma’s address pledged to. “But [the proposed measures] don’t get to the root of the problem, which is the migrant labour system,” Zille said. “The private sector can’t solve that. The government has to.”

IFP leader Mangosuthu Buthelezi told journalists that he welcomed proposals to improve the lot of miners, particularly in light of the platinum strike. In general, however, Buthelezi professed himself underwhelmed: “I didn’t leave the Assembly confident that something is going to take our country forward,” he said.

Even from within the ruling party’s own tripartite alliance, responses to Zuma’s address were not unequivocally positive. Cosatu secretary general Zwelinzima Vavi said that he was concerned that no attention was paid in the speech to the problems of labour brokers, the increasing casualisation of labour, and the need to raise minimum wages. From the perspective of economic transformation, Vavi said, the speech did not go far enough.

But, predictably, it was Malema who would level the harshest criticisms.

“We came to listen to an empty rhetoric, playing to the gallery,” he said. “[Zuma is] saying a lot of nothing. Tomorrow we wake up and the situation remains the same on the platinum belt.” Malema said that mining bosses were not complying with the existing Mining Charter, but nothing would be done because the ANC was “scared” of monopoly capital. He also accused the ANC of paying lip service to “radical transformation” without even having decided what they meant by the term.

“There’s nothing exciting, nothing new,” Malema concluded. “The most exciting, most perfect thing would [have been] Zuma resigning at the end of the speech.”

On Wednesday, we’ll see opposition politicians have their moment to respond to Zuma in the post-SONA debate. For the likes of Maimane and Malema, it will be their virgin speeches in the National Assembly. Malema, who knows he is virtually guaranteed media attention when he says anything explosive, is certain to come out all guns blazing for the EFF’s parliamentary debut. Expect showboating and heckling: in other words, an afternoon far more interesting than the previous evening’s SONA proceedings. DM