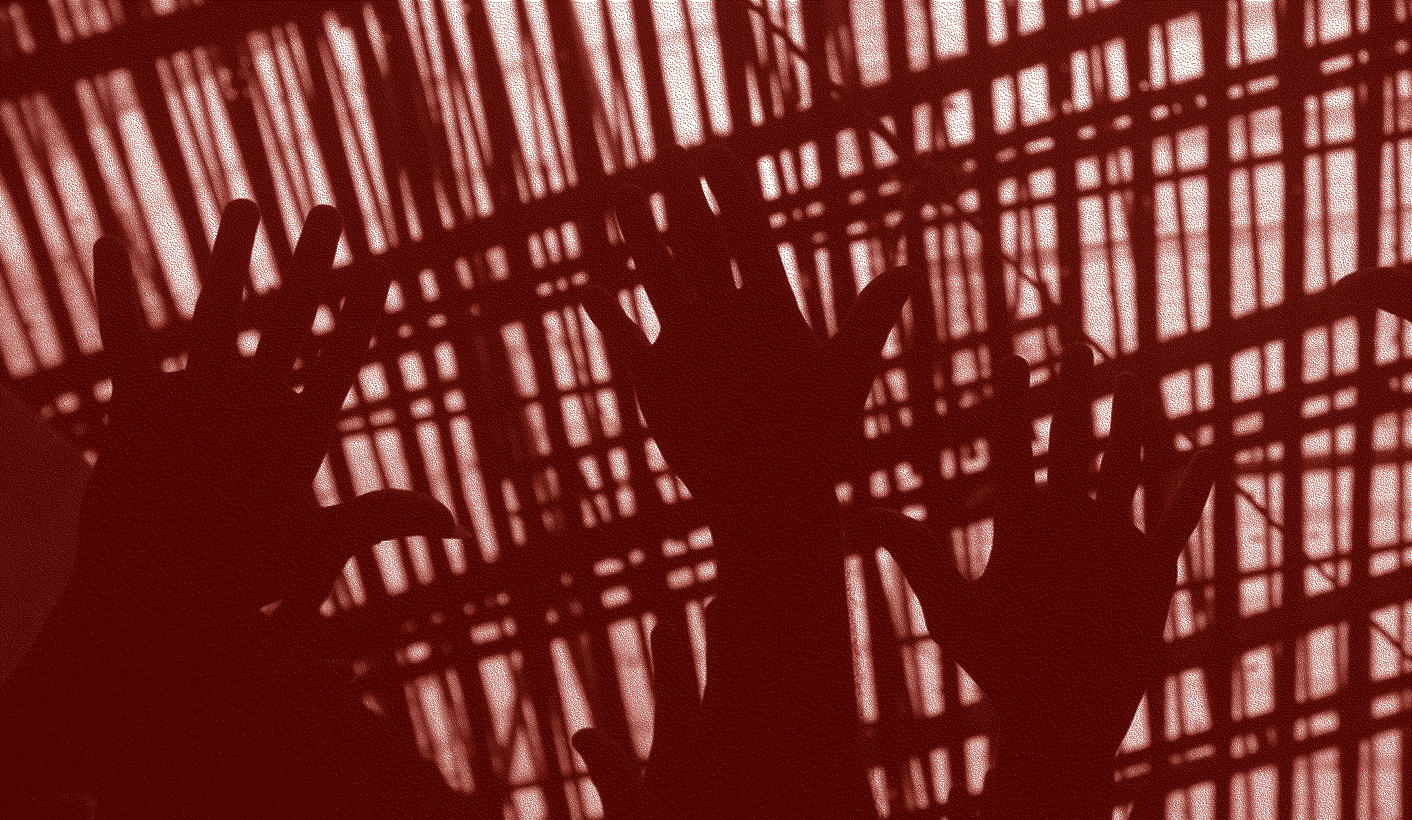 As the groundbreaking case where the Minister of Justice and Correctional Services is being sued by over 200 plaintiffs for torture-related damages continues to unfold, more key witnesses are speaking out. The latest is revealing intimidation tactics through solitary confinement – just one more in a shamefully long list of cruel and unlawful methods. By CAROLYN RAPHAELY.

While Simphiwe ‘Tyson’ Mbena sat in the Port Elizabeth High Court listening attentively to witness after witness describing the mass-beatings and torture he, and they, had endured at the hands of St Albans prison warders in 2005, no one would have guessed he had been held in solitary – or ‘segregated confinement’ as it’s termed in SA today – in the single cells at St Albans prison for nearly six weeks. However, when his turn came to testify on Tuesday 10 June, he was unable to instruct his lawyers, who were forced to lodge an urgent application to end his segregation.

Judge Elna Revelas immediately granted the order after hearing how Mbena (43) was sentenced during a disciplinary hearing to seven days in solitary – the maximum permitted by the Correctional Services Act (CSA), except under exceptional circumstances – and held for 42 days. By this stage, Mbena’s lawyers claimed his mental and emotional state had been adversely affected and his segregation was “unjustifiable, unlawful and unconstitutional.”

Though solitary confinement at the hands of the Security Police in the past and segregated confinement employed as a punitive measure in correctional centres today are not directly comparable, the deleterious effects are similar. “I feel emotionally unstable and am suffering from bouts of panic and nervousness…anxiety and depression,” Mbena said, echoing the sentiments of many former political prisoners. “The longer my solitary confinement has gone, the worse these feelings have become…”

In papers submitted to the court, specialist psychiatrist Peter Crafford confirmed this: “Mr Mbena had developed an adjustment disorder with depressed and anxious mood, largely due to his continuous solitary confinement. His disorder adversely affects his ability to focus, to give sound evidence and to relate to the legal team in his present state.” In addition, Crafford said that Mbena had developed a sleep disorder and poor appetite, and was fearful of being alone and afraid prison officers might want to murder him.

Unfortunately, the more things change, the more they stay the same. According to Port Elizabeth-based human rights lawyer Egon Oswald, representing 231 plaintiffs – including Mbena – who are suing the Minister of Justice and Correctional Services for torture-related damages, no clear reason was ever provided for Mbena’s initial or on-going segregation. What’s more, two letters sent by Oswald to the Minister, the Regional and Area Commissioners and the head of St Albans prison, attempting to ascertain the reasons, were ignored.

Anyone who thought a lack of accountability on the part of State officials, a culture of impunity, torture and solitary confinement were things of the past, should think again. Weeks of harrowing testimony about the St Albans mass beatings and torture, coupled with graphic descriptions of a warder raping plaintiff Bradley McCallum with a baton – after he and his fellow inmates were forced to lie naked in a long, human chain, with their noses in the anus of the inmate in front – made for a rude awakening.

The sense of outrage, humiliation and pain expressed in witness testimony was clearly not shared by Hilton Epstein SC, a seasoned advocate who has represented politicians like President Zuma and Terror Lekota, and is representing the State in the current damages claim. After hearing plaintiff Xolani Siko tell the court how warders handcuffed him by his arms and legs to a grille door in a crucifix position and set dogs upon him and how nine inmates were forced to lie naked for two days in mid-winter on the concrete floor of a single cell, Epstein said his evidence would be disputed.

“I’m told this would be inhumane… Correctional officers would never have allowed that to happen. Some of these correctional officers…have got families and children, do you know that?” Epstein asked Siko. “You paint a picture of them as being these monsters? Are they all monsters?”

In an earlier attempt to diminish Siko’s testimony, Epstein extended this curious line of questioning when he suggested that pregnant female warder Lulu Kabase would never have beaten a naked Siko on his testicles with a baton in the presence of her husband, who also worked at St Albans.

While torture and solitary confinement were routine procedures for political prisoners in the past – probably implemented and executed by regular family-men – today criminals suffer a similar fate. In his submission to the court, Mbena described how he was held in a small single cell containing a toilet and a basin with a single louvred window which received little natural light.

A slightly built man identifiable by his white kofia, Mbena was confined to this cell for 23 hours a day – excluding the times he was brought to court and the one hour’s daily exercise he was permitted if he did not attend court. Meals were delivered to his cell and neither television nor radio were allowed. Nor was he permitted to practice the tenets of his Islamic faith.

What’s more, in terms of the CSA, inmates in segregated confinement must be visited by a correctional officer at least every four hours and their health assessed by a registered nurse, psychologist or medical practitioner daily. According to Mbena, this never happened.

“The focus of this case is about the catastrophic failure of the system, the egregious abuse of State power and state officials who acted in manner inconsistent with the rule of law,” said Oswald. “Had this order not been granted, the DJCS would have had no issue with Mbena’s prolonged detention in the single cells, as has happened to many other clients for whom I have brought a number of applications for relief in similar situations.”

Though Mbena’s lengthly segregation was unlawful, the practice is not unusual in SA today. For example, last May, Wits Justice Project senior journalist Ruth Hopkins revealed that inmates at Mangaung prison, a private prison run by controversial British company G4S, had been held in solitary confinement for between two weeks and three years. For example, according to Hopkins, a 2009 confidential government report listed 62 inmates held in solitary confinement at this prison for varying periods.

One inmate, Oupa Mabalane, who tried to kill himself in 2009, told Hopkins that “the isolation drove me insane…” Mbena had to deal with isolation as well as the stress of his impending trial, his appearance in the witness box and the emotional strain of re-living the events of 2005.

“Mbena was about to be a plaintiff in a torture trial,” Oswald noted. “Then they put him in solitary, which is another form of torture, just a few weeks before the trial [was due to begin], and he is psychologically compromised so he can’t testify. It’s hard to explain.”

Given that DJCS failed to provide any substantial evidence to the contrary, the timing of Mbena’s segregation might just confirm his fear that it was used as an intimidatory tactic as he prepared to testify against a warder-force gone feral. If this was indeed the case, the objective was successfully achieved, albeit only temporarily. After it became clear last week that Mbena was in no mental or psychological state to testify, the matter was postponed until February 2015.

“Mbena’s solitary confinement was unlawful in terms of South African law and infringes his Constitutional rights,” Oswald noted.“It was also in breach of SA’s international law and treaty obligations – particularly regarding the right to be detained in conditions consistent with human dignity and the right to be free from torture, cruel, inhuman or degrading treatment or punishment.”

Though police brutality has become increasingly common in recent years, reports of the abuse of power behind bars, the inhumane treatment of South Africa’s prisoners and South Africa’s embarrassing disregard for international sanction are only starting to surface now. Embarrassingly, if the testimonies of Siko and the other 230 plaintiffs are proven to be correct and accepted by the court, it follows, according to Epstein’s logic, that the implicated St Albans warders would indeed be “inhumane monsters,” or they would never have acted as they did. DM

Carolyn Raphaely is a senior journalist with the Wits Justice Project (WJP) which investigates miscarriages of justice related to the criminal justice system. The WJP is a project of the University of the Witwatersrand’s journalism department.