EFF: The revolution is now inside parliament (and will be televised) 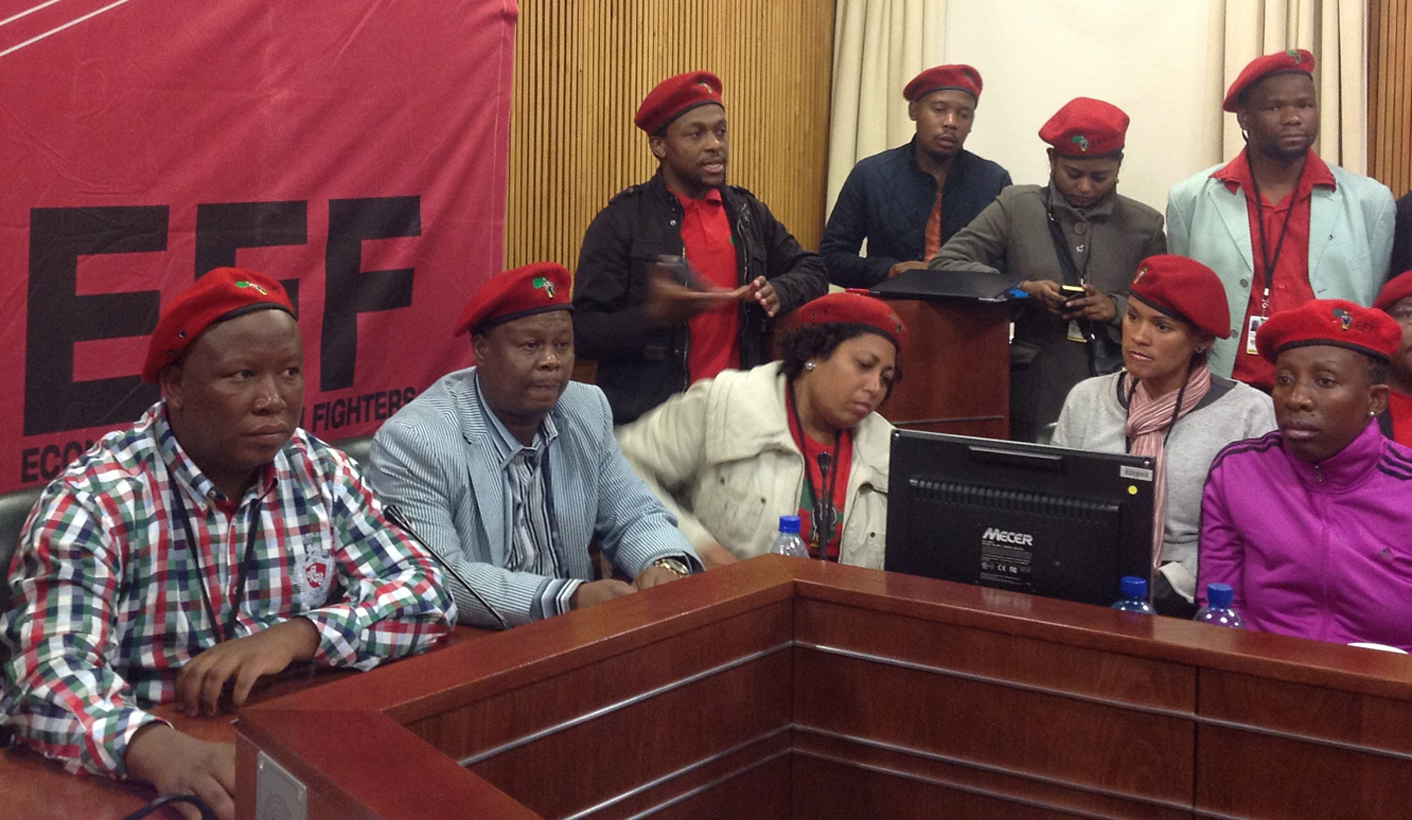 In the run-up to the elections, the EFF revealed themselves to be adept both at political theatre and at tapping into a vein of deep discontent among South Africa’s working class in particular. Confounding the expectations of some cynics, they have won 25 seats in the National Assembly. But now that the time for campaign stunts is over and the hard graft of the fifth parliament has to begin, what can we expect from their elected representatives? Commander-in-Chief Julius Malema was on hand to explain to journalists on Sunday. By REBECCA DAVIS.

For a party established less than a year ago, the Economic Freedom Fighters sure know a thing or two about politics. They know, for instance, that press conferences on a Sunday are an almost guaranteed way of winning media attention, because there’s much less deemed ‘newsworthy’ officially happening on that day.

But this probably wasn’t the only reason why the EFF’s parliamentary briefing won a high turn-out of journalists. The other intriguing factor is that the EFF now has to shape-shift into an outfit prepared to take on the daily work of parliamentary process. They have successfully established themselves as an alternative voice on the outside. But it can’t all be protests and Nkandla house giveaways. The party has to prove themselves worthy representatives of the over 1 million South Africans who voted them into parliament.

Their work now has to take place within the establishment, not outside it. Their 25 MPs may have dressed in overalls and maid uniforms for the swearing-in, but like any other parliamentarians, they are taking home more than R900,000 per year in salaries, plus benefits including housing, travel and medical aid. Will it be harder for the self-styled “fighters” to seem revolutionary while operating within parliament’s elite walls?

Aesthetically: yes. It seems that the red workers’ gear will not, in fact, characterise their everyday parliamentary wear. Malema said on Sunday that this manner of dress would be reserved for “key parliamentary events”, such as the State of the Nation Address, and the opening of parliament. They will not be donning the overalls for state functions, because “the mandate of our people relates only to representation to parliament”.

But in other respects, the EFF is still talking a radical game by the standards of SA’s conventional political discourse. One of their first acts, Malema said, would be to table a motion legally requiring all public representatives to use public services, in terms of hospitals, schools and so on.

“We believe that it does not make sense that government gives people services that its leaders are not prepared to use,” Malema said. The party believes that if leaders are required to use public services, the quality of these will rise quickly.

It’s a gesture which probably hasn’t a hope of succeeding, but which is guaranteed to win the approval of many: EFF 101, in other words. When asked if the party’s own parliamentarians would be declining MP benefits in the interim, Malema explained that they hope to see parliamentary housing eventually sold off, with the proceeds given to the needy residents of Khayelitsha. But, until that time, EFF MPs will use the housing because otherwise it would amount to “wasteful expenditure”, which would be “irresponsible”. They would also be happy to make “personal arrangements” for their medical aid, Malema said. “We are not here for medical aid.” But most employers do provide medical aid, he pointed out.

This kind of thing will be dismissed by the EFF’s political opponents as more showboating, but the party is clearly readying itself for the real nuts-and-bolts of parliamentary work. Sunday’s press conference took place on the back of a three-day political induction workshop for EFF MPs, designed to get to grips with the landscape of South Africa’s political economy. Among the admin sorted out over the weekend was the issue of who is going to tackle which portfolio area. Among these: former ANC Youth League leader Floyd Shivambu goes to Finance, Black Consciousness academic Andile Mngxitama to Rural Development and Land Reform, ex-ANC Youth League spokesperson Magdalene Moonsamy to International Relations, and Marikana activist Primrose Sonti to Public Works.

Malema himself will be deployed to Mineral Resources. The mines will be their initial focus of attention, including a parliamentary motion that parliament “must get involved” in finding a lasting solution to the ongoing platinum strike. Malema had some kind words for new Mineral Resources Minister Ngoako Ramahlodi, noting his “well-meaning attitude”. But Ramathlodi will not get far in upholding workers’ rights, Malema predicted, in a Cabinet packed with the beneficiaries of mining capital. Here he singled out Minister in the Presidency Jeff Radebe, Deputy President Cyril Ramaphosa and Speaker Baleka Mbete for particular opprobrium.

Land will be their other primary preoccupation. Shivambu spoke of the need to reduce reliance on food imports by guaranteeing access to land by all South Africans and intensifying small-scale agriculture by ensuring small-scale farmers receive the necessary support. The governmental model over the past 20 years has to change, Shivambu said, “buying land from those who stole it” and not helping farmers adequately after that. Malema reiterated that EFF policy is the expropriation of land without compensation.

Malema described new Agriculture Minister Senzeni Zokwana as a “walking disaster”, and, borrowing a much-loved term from the Helen Zille playbook, evidence of President Jacob Zuma’s “patronage” network. Malema suggested that former NUM leader Zokwana was being rewarded for having threatened to march naked on the Goodman Gallery in 2012 to protest against Brett Murray’s controversial painting “The Spear”.

“This country has become a joke,” said Malema. “You want a Cabinet position, you must threaten to march naked.”

It wasn’t just Zokwana who came in for a Malema tongue-lashing, as is traditional. He suggested former top cop Bheki Cele was a hopeless choice for Deputy Agriculture Minister – “Is Bheki Cele going to shoot and kill the fishes?” he asked. Speaker Baleka Mbete is so weak that “I won’t be surprised if she cries one day here in parliament”. The DA’s Zille is “the number one racist in South Africa”.

On the note of the DA, Malema was asked if the EFF would display solidarity in opposition and vote together with the DA against the ANC.

“We are not the DA, we don’t oppose on the basis of opposing,” Malema replied. He indicated that the EFF would vote alongside any party which shared its policy on a given matter. “If the DA says we must vote Zuma out, we will vote with them. But if they say we must vote Zille into power, we refuse. We are not drunk.”

“It will be a nice day when we see the ANC and the DA agreeing with each other against the EFF,” Malema said. “We are going to push them to that level that they are marrying each other.”

But on one matter at least the EFF and the DA look likely to stand shoulder-to-shoulder in the near future: the need to reconstitute the ad-hoc committee investigating President Zuma’s response to the Public Protector’s report on Nkandla. Malema dismissed the idea that new Speaker Mbete would be able to suppress the opposition’s demand in this regard.

“We won’t retreat on Nkandla,” Malema said. “We stand with the Public Protector.”

Despite the party’s reputation for political gimmickry, Malema promised EFF voters that what they could expect from the party’s MPs would be targeted interventions on “serious, substantial issues”. Shivambu vowed that the EFF would bring the voice of the working class into parliament: “If there’s an issue in Wonderkop, we’re going to make sure it is heard here in parliament”.

Elections may be over, Malema said, but the revolution is only just arriving in parliament:

“This is another terrain of advancing our struggle”. DM