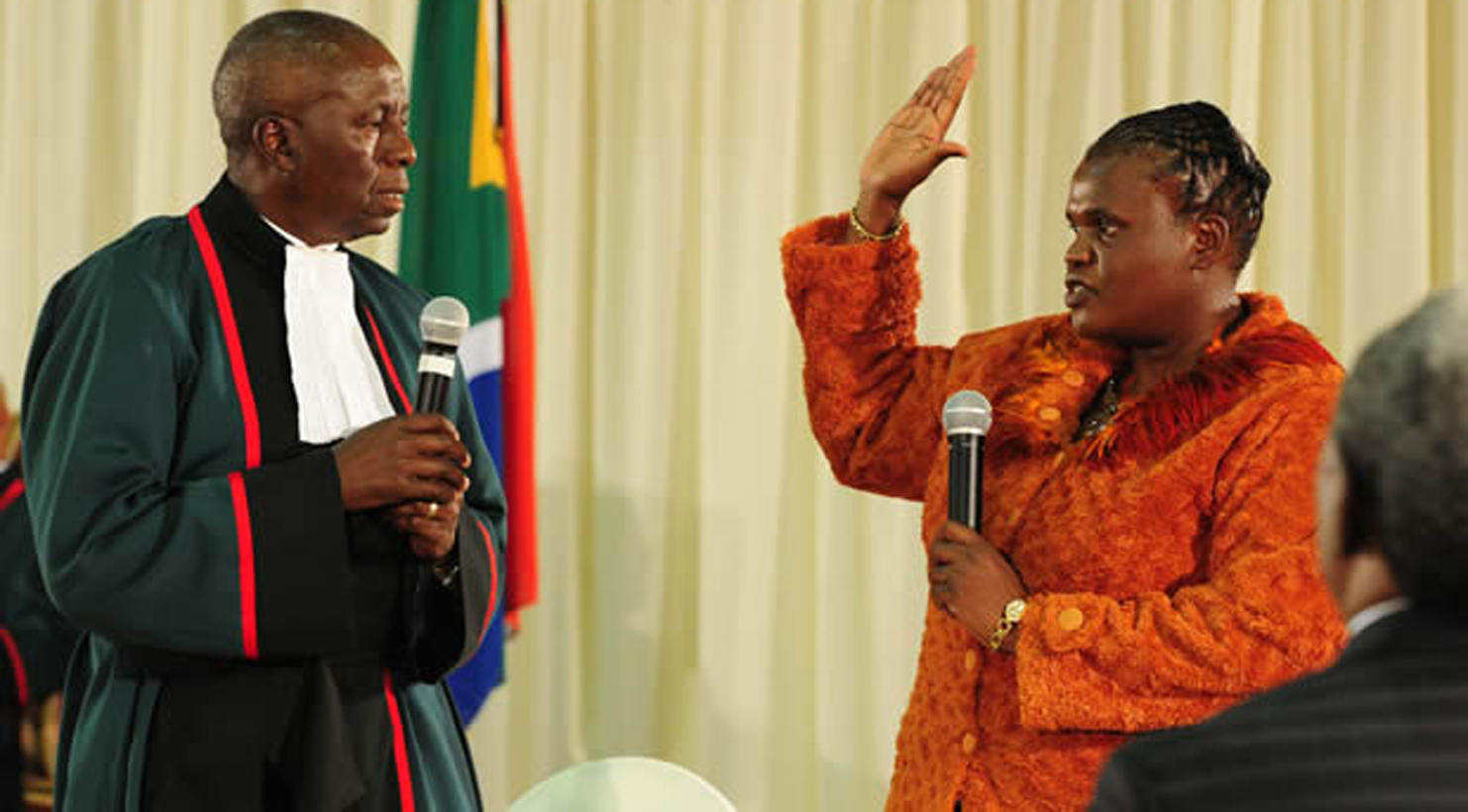 Since President Jacob Zuma announced his new executive on Sunday night, there has been wide-ranging criticism of its inordinate size and the fact that it is a hotchpotch team which rewards loyalists and satisfies ANC interests rather than the country’s. Is this the best team to ensure South Africa’s future success? Most definitely not. Still, the country cannot afford this team to fail. Data released by Stats SA on Tuesday shows further shrinking of the economy and the term “recession” has filtered back into parlance. The establishment of a “communications” ministry is an acknowledgement that the South African government needs to project itself better and repair its poor image. But can it? And is this new ministry the way to do it? By RANJENI MUNUSAMY.

Pope Francis made a historic tour to the Holy Land over the weekend, and while travelling in Bethlehem on Sunday, made an unscheduled stop at the massive concrete separation barrier which divides Israel from the West Bank. The papal tour was ostensibly a religious one, but it is impossible for anyone, let alone one of the world most influential figures, to be in that turbulent conflict zone and not make a political statement.

The world’s best PR practitioners could not have come up with what Pope Francis did. He got his Popemobile to stop unexpectedly at the controversial wall, erected a decade ago to restrict the movement of Palestinians. While Israeli guards watched from a fortified tower, the Pope walked to the wall and bowed his head in silent prayer where “Free Palestine” was spray painted in red. He put his hand on the wall as he prayed. Just before turning to leave, he touched his forehead to the wall. Within minutes, the images went around the world. The picture of the Pope’s forehead against the wall is destined to become one of the most iconic and powerful images of our time.

The simple gesture communicated so much. It was a spontaneous act but perhaps the wily Pontiff, with a penchant for nonconformity, knew exactly what he was doing and the impact it would create.

Good leadership is inherent. You cannot fake it, manufacture it or spin it. No matter how much you try, you will be exposed. Bad leadership is also difficult to conceal, even if you have Jonathan Moyo running your Information Ministry.

So what is the purpose of the newly created “Communications Ministry”? President Jacob Zuma said on Sunday when he announced the new Cabinet that the ministry would be responsible for “overarching communication policy and strategy, information dissemination and publicity as well as the branding of the country abroad”.

“Improved communication and marketing will promote an informed citizenry and also assist the country to promote investments, economic growth and job creation,” Zuma said. Of course this is true in theory. But what exactly will this Ministry, which will incorporate the Independent Communications Authority of South Africa (Icasa), the South African Broadcasting Corporation (SABC), Government Communication and Information System (GCIS), Brand SA and the Media Development and Diversity Agency (MDDA), be expected to communicate? And why has government not been able to communicate this up to now?

The first worrying problem with the new arrangement is the bundling of all these entities together to improve government’s “communication and marketing”. It is rather bizarre why an independent regulatory authority should be bundled together with the public broadcaster and government communications system. The arrangement also puts paid to any former pretence that the SABC was independent of government.

The GCIS and Brand SA, however, were designed precisely to communicate the work of government and aggressively market South Africa locally and abroad. Apart from the extensive machinery of the GCIS, each department at national and provincial level has full time communicators for media liaison, marketing and public relations. What the communications ministry does therefore is put fulltime political figureheads – a minister and deputy minister – on top of this network.

This might in fact help the work of GCIS. One of the biggest problems with this department under the Zuma administration is that its work was not taken seriously and there was limited political backing for government communications. Inadvertently, the hostile relationship that Zuma’s office has with the media has permeated throughout government. The media is perceived to be anti-government and there is a prevailing perception that the media needs the state more than the other way around. There is little effort from either side to confront or normalise the situation.

The GCIS has been without a permanent chief executive office since the departure of Jimmy Manyi in August 2012. Manyi’s tenure at the GCIS left the department flailing as he had little knowledge or experience in communications. After government decided not to renew his contract, the GCIS has been in a holding pattern with the acting CEO Phumla Williams and the management team unable to act authoritatively and direct how crises and scandals affecting the state should be handled.

This was most evident in how government dealt with the Nkandla security upgrades. The GCIS was unable to firefight the PR crisis before and after the release of the Public Protector’s report because clearly they were not empowered to do so. It is clear that they were not given the benefit of information they could use to limit the damage to the state. Their only involvement was to arrange media conferences on behalf of the now former security cluster ministers.

The coincidence of the election campaign and 20 years of democracy celebrations produced high-octane government advertising campaigns – many of which were branded in ANC colours. This, together with the struggle government had with navigating scandals like the Nkandla upgrades, obviously triggered discussion about the need for more sustained advocacy and positive messaging. The original intention seemed to be for the establishment of an “information ministry” but this might have been changed because of the negative connotations associated with Zimbabwe, China and Russia.

It is curious that the president chose a relatively low profile Member of Parliament, Faith Muthambi, to head the ministry and be the chief figurehead for government communications. Muthambi was the ANC Whip on Parliament’s communications portfolio committee but made the news recently as one of seven ANC MPs who served briefly on the parliamentary ad hoc committee to consider Zuma’s response to the Public Protector’s report on Nkandla. The ANC contingent, which outnumber the opposition MPs, managed to get the committee squashed and deferred the report to the new Parliament.

Judging by a speech she made during the 2013 GCIS Budget Vote, Muthambi is no fan of the media. “Media continues to publish negative news on government disregarding the good service delivery record of government. The media continues to distort and ignore information provided by government in a transparent and accountable manner,” she said.

It might take some reflection by the new ministry to discern that the media is not government’s biggest problem which is creating a negative image and public sentiment. The scandals surrounding the last government were not conceived by the media. It was government’s own actions which led to crises like the Nkandla scandal, and their handling of the fallout did not help matters either.

The first round of scandals of the last government arose when ministers went on a spending spree for luxury cars and were living it up in expensive hotels. These can hardly be blamed on the media. No amount of government propaganda can beat officials and political leaders doing what they are supposed to do in the best way possible. That is the best way to build a “good story”.

It is in the national interest that government rallies all sectors of society to boost confidence and get the country working. Worrying economic data released on Tuesday revealed a first quarter GDP decline of 0.6%, caused mainly by the protracted strike on the platinum belt. There is now talk of a possible recession, which results when the economy contracts over two consecutive quarters.

This will be devastating for the new government, hoping to set off on a positive note. There is definitely no honeymoon period and Zuma and his new team need to put shoulder to the wheel quickly and confront the issues resulting in negative growth.

With a new team and a new approach with less scandal and more work, it would be possible to turn around government’s image. South Africa does not need iconic moments that will grab the world’s attention, or to belt out propaganda through high budget advertising and PR stunts. If government gets things right through good leadership, people will know it and see it in action.

If the new communications ministry is able to communicate that throughout government and alter the conduct and outlook in the public service, it certainly will have a good story to tell. And South Africa’s people will be more than willing to listen to it. DM

Photo: Minister of Communications Faith Muthambi is sworn in at a ceremony held at Sefako Makgatho Presidential Guesthouse in Pretoria. (Photo: GCIS)