Arms Procurement Commission: Big guns, finally out in the open 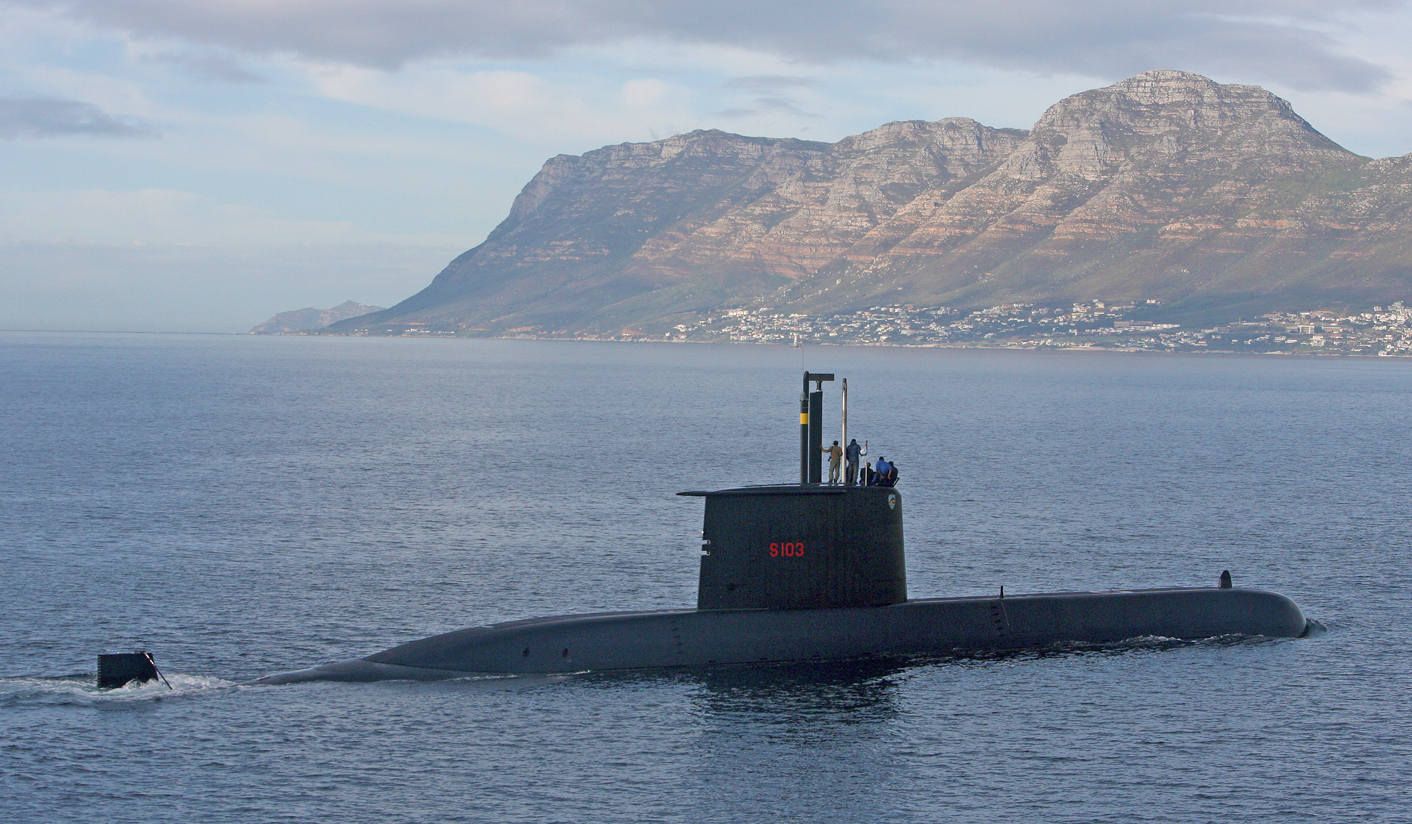 If all goes according to plan – and this is murky territory because it depends on whose plan we’re talking about – the Arms Procurement Commission, appointed by President Jacob Zuma and headed by Judge Willie Seriti, appears to be finally gearing up for the main act when the big guns - the main players who signed off on the deal - including former Deputy Minister of Defence, Ronnie Kasrils, former Minister of Defence, Mosiuoa Lekota, former Minister of Finance, Trevor Manuel, and finally, former President Thabo Mbeki, are scheduled to appear in just over a week’s time. One man has been waiting a long time to ask all of them a lot of probing and uncomfortable questions. By MARIANNE THAMM.

Although he’s been burning the midnight oil preparing lengthy and detailed questions for his planned cross-examination of the top key political players in South Africa’s infamous R70-billion “arms deal” at the Seriti commission next month, tireless activist, journalist, author and retired banker Terry Crawford-Browne has a renewed spring in his step.

Now that much of the sideshow at the commission (which has been bogged down by resignations, accusations of a ‘second agenda’, allegations of ‘perjury by omission’, a suicide and endless delays) featuring a gallery of secondary “minions” appears to be nearing its end, Crawford-Browne is girding his loins to take on the big guns, the key political players at the top of the pyramid: Ronnie Kasrils, Mosiuoa Lekota, Trevor Manuel and Thabo Mbeki.

The campaigner has had a change of heart since writing to acting chief justice Dikgang Moseneke in February this year asking for advice about the “farcical” commission and also since submitting a supplementary affidavit to the Constitutional Court setting out why the Arms Procurement Commission (APC) had “degenerated into a farce, which is simply wasting time and public resources as part of a further cover-up of the arms deal scandal”.

Crawford-Browne, as well as other activists including Andrew Feinstein, Hennie van Vuuren and Paul Holden, are determined to prove that the arms deal acquisitions were, from the inception, unconstitutional, illegal and riddled with corruption. Crawford-Browne’s ultimate goal is to see all the contracts cancelled and the money returned to the public purse.

Earlier this year, Crawford-Browne says, he had been convinced that the only way the original contracts could be cancelled and the R70 billion recovered was for the case to be heard by the Constitutional Court and for the Seriti commission to be disbanded.

“My initial view was that I should not lend the commission any legitimacy and while I remain wary, I have in the meantime, since those who caused the entire deal are scheduled to appear, written to the commission to inform them I intend to exercise my right to cross-examine Ronnie Kasrils, Mosiuoa Lekota, Trevor Manuel and Thabo Mbeki,” Crawford-Browne told the Daily Maverick.

On 15 and 16 May, Pierre Steyn, a lieutenant-general with 34 years’ service in the South African Air Force and who was secretary of defence and the accounting officer from August 1994 to November 30, 1998, gave evidence at the commission and is due return on 6 June to be cross-examined by Lawyers for Human Rights.

Steyn told the commission he had resigned before 1999 (when the arms deal was signed) because he was of the opinion that it was “dodgy”. He implicated the late former minister, Joe Modise, and Chippy Shaik, the DOD’s chief of acquisitions, as key figures involved in manipulating the Strategic Defence Procurement Package (SDPP).

In a statement to the commission Steyn said: “In view of persistent attempts by the minister to dismiss sound financial arguments, ignoring prescribed acquisition processes and unduly speeding up the SDPP process, I contend that the process adopted by the minister, devotedly supported by the chief of acquisition, lacked transparency and was influenced and manipulated to such an extent that the possibility of fraud and corruption cannot be summarily dismissed.”

Retired Rear Admiral Jonathan Kamerman, a specialist in “surface warfare” who joined ThyssenKrupp Marine System in 2006, is set to appear on 26 and 27 May, and former chief negotiator in the arms deal, Jayendra Naidoo, on 30 May.

Kamerman will testify as to his role in Project Sitron (one of the legs of the arms deal so to speak), the rationale behind the acquisition of four Corvettes for the SDPP, the negotiation phase after the selection of German Frigate Consortium (GFC) as a preferred bidder as well as his role in the evaluation report that was prepared and moderated by Admiral Howell before remission to Sofcom (Strategic Offer Committee).

While this may all be of keen interest to those who have closely watched and followed the intricate and convoluted machinations of the arms deal, the rest of us are stocking up on popcorn for 2 June, when Kasrils is billed to appear before the commission followed by Lekota on 3 June, Manuel on 10 June and the big cahoona, Mbeki, on 12 and 13 June.

Crawford-Browne and Mbeki have a long history and were once on first-name terms. In October 1989, Mbeki invited Crawford-Browne, who advised Dr Allan Boesak and Archbishop Desmond Tutu on the banking sanctions campaign against Apartheid South Africa from 1985 to 1993, to the Pamdozi Hotel in Lusaka to discuss the matter.

At the time, recalls Crawford-Browne, the Archbishop of Canterbury and the Managing Director of the IMF had offered to mediate between international banks and the ANC and the UN had set June 1990 as the deadline for the abolition of Apartheid. Meanwhile, the Commonwealth Heads of Government were also due to meet in Kuala Lumpur to discuss plugging the loopholes in banking sanctions.

“Do you remember that the ANC’s NEC endorsed the initiative whilst you sat on my bed at the Pamodozi Hotel, and smoking your pipe?” Crawford-Browne is due to ask Mbeki.

In 1992 Mbeki had been invited as a guest to Crawford-Browne’s Constantia home where he (Crawford-Browne) had helped to organise a banquet where members of the Cape Town business community would meet Mbeki.

It’s a pity that media houses have not thought of securing broadcasting rights to the cross-examination of the former president of the Republic of South Africa, because if it should come to pass, it is bound to provide content that will rival the Oscar Pistorius trial not only in “entertainment” value but in terms of possibly blowing open 15 years’ worth of cover-ups of allegations of corruption.

Andrew Feinstein, writing on the Lawyers for Human Rights blog, has summed up the impact of the arms deal thus: “The social impact of the arms deal is readily dismissed by only the most cynical among us. Those affected are to be found in the empty seats at family gatherings and child-headed households. The trade-off for buying weapons and subsiding bribes and kickbacks was that the state failed, among others, to provide adequate medical treatment to the most vulnerable. There can be little doubt that the arms deal significantly contributed to economic and social problems in the first two decades of freedom.”

In 2013, the possible cost of Mbeki’s legal team to represent him and other current and former state officials at the APC caused a stir when Minister of Justice, Jeff Radebe, announced that the state wanted to save money having one legal team representing them all.

“Naturally there may be those who wish to be provided with private legal representation outside of or in addition to the state attorney team. This is perfectly permissible in terms of the regulations, however under these circumstances, the costs for such legal representation shall be borne by the person requesting such additional support,” Radebe said.

But appear Mbeki will, either represented by his own team or not.

Crawford-Browne has intimate knowledge of the arms deal and is unlikely to hold back. There is no doubt that Mbeki, Manuel, Lekota and Kasrils are going to need some serious legal Kevlar. DM

Photo: South African Navy submarine SAS Queen Modjadji arrives in Simonstown, South Africa, 22 May 2008. This is the latest submarine supplied by German shipping company Thyssen Krupp Marine to South Africa. The Class 209 submarine is one of three that were part of the massive 4.8 billion US dollars (3 billion euro) South Africa spent modernising its military when the United Nations arms sanctions were lifted at the end of apartheid. But ever since that arms deal was signed in November 1999 it has been the subject of controversy, with allegations of bribery and corruption with the president Thabo Mbeki now called upon to answer questions about his involvement. EPA/NIC BOTHMA