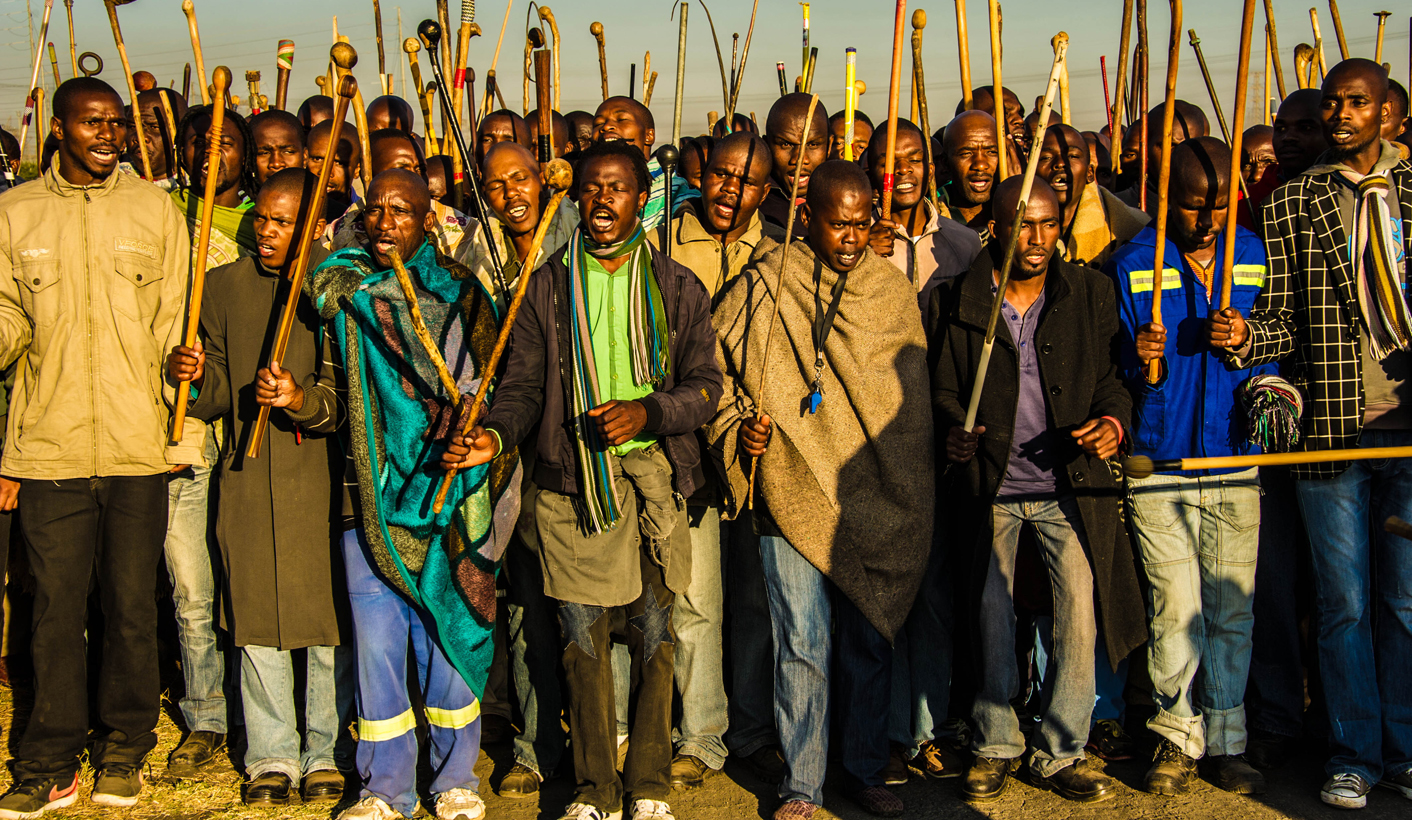 In Marikana, the symbolic source of the R12,500 demand for mineworkers, Lonmin Platinum looked set to potentially break the industry strike on Wednesday. But violence has broken out in the area and few employees appear to have heeded the call to return to work. The latest chapter of the platinum strike is much like the last, but with more police. By GREG NICOLSON & THAPELO LEKGOWA.

Little has changed in the strike-depressed town of Marikana. Getting breakfast proves difficult, with many stores closed or opening late. Finding decent coffee has always been impossible. Now, it’s hard to find any coffee at all. Men, women and children stand around chatting, idly walking or playing. With the platinum strike having continued for almost four months, people asking for money, a drink or cigarettes are ubiquitous.

As in recent weeks, there was another gathering on Wednesday to discuss the strike. But unlike most meetings since the 2012 massacre, miners marching to Wonderkop Stadium carry traditional weapons like knobkerries, sticks and sjamboks, or whatever is closest, like a dragon-handled walking stick.

Photo: Workers marching from the direction of the Koppie toward the Wonderkop Stadium to attend general meeting to be addressed by AMCU president Joseph Mathunjwa, Wonderkop, Marikana, North West, South Africa (Thapelo Lekgowa)

Violence flared up in Marikana again recently (has it ever really subsided?) as Lonmin decided it would resume operations on Wednesday and called for employees to return to work. At least three people were killed around the mines in the last week, violence believed to be related to striking miners wanting to prevent others from returning to work. Over at Impala, three cars were torched on Wednesday.

Official discussions between the platinum producers (Lonmin, Impala Platinum and Anglo American Platinum) and the Association of Mineworkers and Construction Union (AMCU) broke down after labour rejected the latest pay offer. And, déjà vu, the police were priming themselves on Wednesday afternoon to push into Marikana and arrest those they have identified as the cause of the violence.

Photo: Mineworkers sing and carry sticks and knobkerries as they march to an AMCU meeting to discuss the latest issues in the platinum strikes. (Photo Greg Nicolson)

According to reports, Police Minister Nathi Mthethwa said the police must distinguish between those protesting and those causing anarchy.

“We will pursue, by all the might we have, those who are involved in criminal acts, whether they are disguised as industrial action or what-have-you, but if you do that and cross the line, we will be on your case,” the minister warned during a briefing at Marikana police station.

Photo: A member of the audience stands to sing while AMCU President Joseph Mathunjwa addresses a crowd at Marikana’s Wonderkop Stadium. (Greg Nicolson)

AMCU President, Joseph Mathunjwa, compared the police force in the area to what happened during August 2012 and warned it would lead to more trouble.

“Deploying the police in the issue of labour relations is a recipe for disaster,” said Mathunjwa after addressing a gathering of more than 5,000 people at Wonderkop Stadium. He said the violence in the area in 2012 was due to a breakdown in the relationship between the company and the unions as Lonmin was left to negotiate (or ignore workers’ demands) with employees.

Mathunjwa told members to stay calm and know that the long road to R12,500 will be over soon.

“It will not make sense for us to quit now and go back to work as that will be a victory for the employers,” he said. “Every man must fight for himself; no one can fight for you.”

Union leaders mentioned strikes around the world that have lasted much longer than the current platinum strike.

As usual, Mathunjwa told the long tale of when he came to Marikana with AMCU to find workers with nothing, no union and no one to listen to them and he rescued them, gave them a home. He elaborated on how AMCU is the most revolutionary union and is poised to achieve what no other union in this country has achieved before.

He said the union’s strike fund will be used to help the workers in key aspects of their lives, such as helping them attend and fund funerals in their home provinces. The AMCU leader spoke harshly about government, “What our government is doing is a clear indication of where they stand, they are on the side of capital and not that of the workers who have just voted them in.”

Later, Mathunjwa said North West Premier Thandi Modise’s encouragement that the workers go back to work shows such politicians are making money from the mines and are currently upset.

AMCU has applied to the Labour Court for an urgent interdict to prevent Lonmin, Amplats and Implats from communicating directly with its members, using a survey to measure how many people want to return to work, and making the wage offer directly to employees. The companies have used their direct communication with employees to support their argument that people want to go back to work but are scared of violence. AMCU claims the companies’ actions contravene the Labour Relations Act.

It seems Lonmin may have decided to call its employees back to work too early. If the company had reported a high worker turnout it could have been a fatal blow to AMCU’s demand of R12,500 basic wage in four years for entry-level underground workers, opposed to the offer of R12,500 including allowances in five years, as it would have proved their was a lack of support for the strike.

The police escorted buses of those who wanted to go to work on Wednesday but speaking across multiple media platforms Lonmin refused to reveal the turnout. Lonmin’s spokesman Happy Nkoma simply told Talk 702 the turnout was “very low”.

Photo: Fires from the late night patrols for workers who might report for duty [Amagundwani], (Thapelo Lekgowa)

The three companies put out a joint statement on Wednesday: “The producers are seeking an end to the strike. To this end the companies have tabled a fair, affordable and sustainable wage offer to AMCU. The companies want to ensure that employees are fully informed of the offer, and that they are empowered to accept or reject the offer of their own free will.”

But, apart from violence and a police crackdown, there has been little progress in ending the strike. The union and many of the miners continue to request more involvement. President Zuma recently said the strikes can’t go on forever and while the labour minister is attempting to get parties to the table, government has been reluctant to intervene. Given that elections are over, we’ll be watching to see whether that changes. DM