Promises, princesses and pear-shaped realities: View from the heart of the IEC 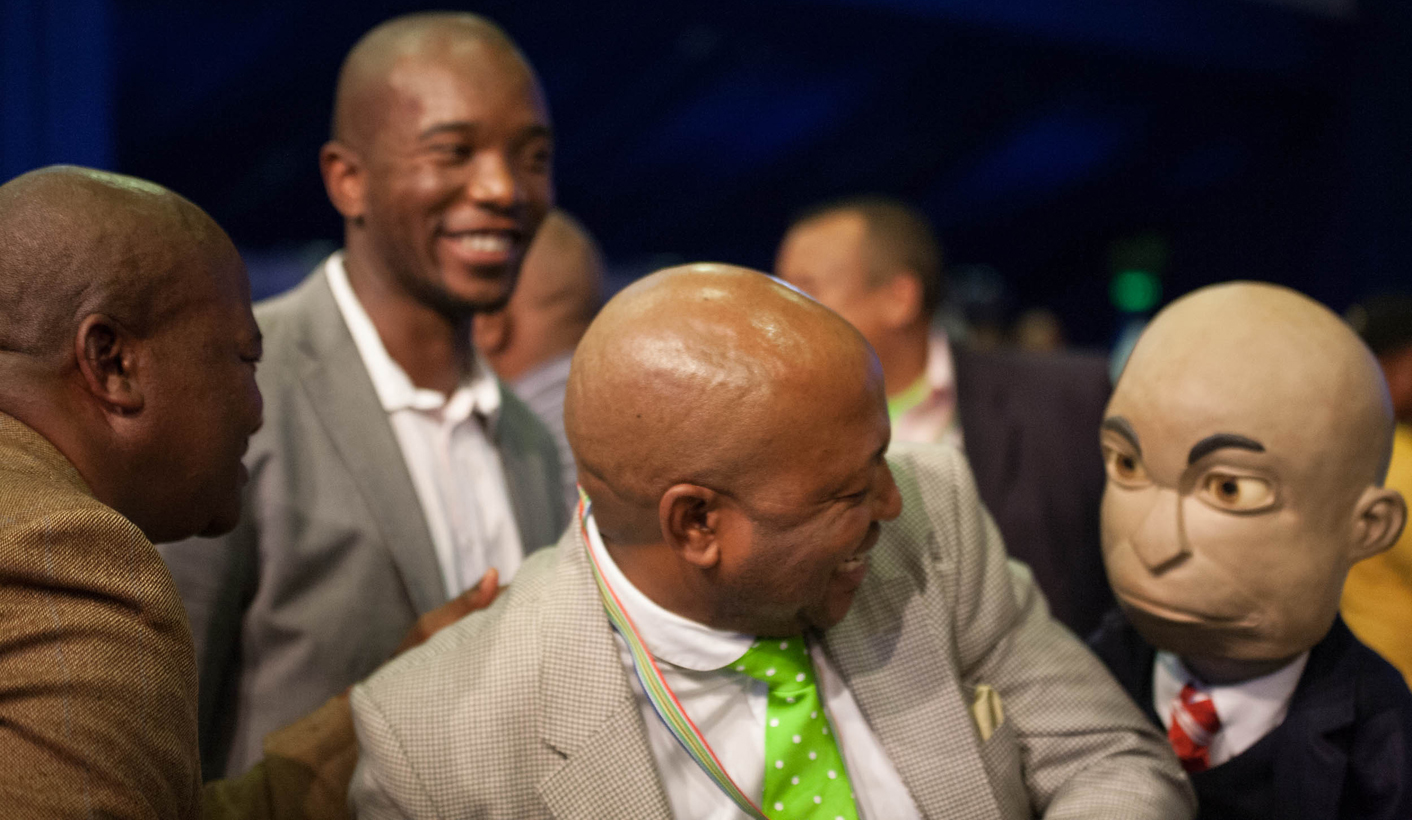 On TV, it might look like the floor of the IEC’s results operation centre (the ROC, as it’s affectionately known) is a very solemn place. You hear the tough questions, you know the tense relationships between the politicians involved. But it’s actually a strangely intimate venue. While the IEC is grappling with serious new allegations about unexplained ballot boxes in Alexandra and DA-marked ballots in Pretoria, SIMON ALLISON and GREG NICOLSON did a few less serious rounds of the venue.

Here, in the shadow of the giant results screen, mingle IEC officials, party bigwigs and flocks of hungry journalists who can barely believe that the Helen Zilles, Gwede Mantashes and Malusi Gigabas of this world are just standing there and waiting to be interviewed. It’s never that easy. Where are the PAs and bodyguards and spokespeople? It’s a journalist’s wet dream, and they are flocking round all the big names. One journalist has asked so many questions that he’s lost his voice, and has been reduced to sipping cough syrup like Oros on the sidelines.

Avoiding the crush, we wander over to three disconsolate souls at the Agang SA table. They look crushed. This day has been a disaster. Not only are they not going to be the official opposition, but the good doctor Mamphela is probably not even going to make it to parliament. They put on a brave front when we chat to them – yes, Agang still has a future, they assure us, although the doubt is written all over their faces. No, Mamphela will not be making another appearance at the ROC.

From Agang we head to the Congress of the People, the other big losers of the day. “It’s worse than we expected,” confides one party representative. They’ve gone from 30 seats in parliament to one – maybe two if they are lucky. The only saving grace? At least Terror Lekota will still be there to ask the difficult questions. Although he mustn’t forget his hat, which he promised to eat if COPE performed worse than last – what condiments go best with hat?

Cope’s table is directly behind the ANC’s, which is buzzing with activity. The cadres are on a high. The ANC has done well. Not as well as last time – in fact, not as well as ever, but then they did have what should have been a near-impossible task of selling another five years of Jacob Zuma. Even with this handicap, support only dropped by a few percentage points. It’s an excellent result and Gwede Mantashe knows it. He’s buzzing around like a rotund bumble bee in a stripey black and yellow polo shirt, clapping comrades on the back and commiserating with humbled foes. When he’s not talking to anyone, he ambles around eyeing the results screen happily, whistling a tune to himself.

Eventually we do brave the media scrum for a couple of proper interviews. The first doesn’t go so well. “The Daily Maverick? You guys hate me,” says sushi king Kenny Kunene – not an unreasonable response given the frequency with which we preface his name with ‘sushi king’, and of course Richard Poplak’s infamous profile in which Kenny got lumped together with Juju as “a new breed of South African asshole”. Still, it’s not true, we assure him – we don’t hate him. At least not especially (“I’m an equal opportunity hater” is Poplak’s tagline).

To his credit, Kenny takes the jibes in good spirit. After all these years in the limelight, he’s got a thick skin. Speaking of limelight – between the lime green polkadot tie and lime green pocketsquare, he’s hard to miss. “I’m feeling good. I’m very happy…Remember when we started, we had zero…it’s politics, you work hard, you become ambitious, you have to appreciate the result you get. We now have something to work with going into 2016 elections and then 2019.”

As the results stream in, Kenny might be contemplating if leaving Julius Malema’s EFF was a bad move. Currently, the EFF has nearly 60 times as many votes as Kenny’s Patriotic Alliance. “It’s good for them [the EFF]. They had a particular campaign. Our campaign was not focused on insults and personalities, it was focused on politics and principle…we have achieved this without losing our dignity and image.” A finely crafted insult from one of South Africa’s biggest personalities.

One of the stranger sites on the floor were the sash and blonde tresses of Danielle Smith, otherwise known as Miss Teen South Africa, who was posing for [legal] selfies with every politician she could find. “I’d still like to meet the president,” she says. “And Malema,” one of her entourage interjects. We’re sure Juju would be delighted. No one’s quite sure what the adolescent beauty queen is doing here – it has something to do with Lead SA’s Yusuf Abramjee, apparently – but she seems to be having a good time, and is attracting plenty of lingering glances. “I am a democracy baby!” Right.

The event’s other princess, Lindiwe Mazibuko, is also in fine form, covering for DA leader Helen Zille whose apparently limitless energy has finally run out. “I feel really terrible for my party leader who has been here all night and I think has had three hours of sleep. She’s gone home for some kip now and we’re holding down the fort.” Zille, it’s rumoured, is none too happy with the DA’s performance, having had her heart set on getting past that 25% mark (the DA are hovering around 22%). Mazibuko’s putting a positive spin on things, however, and she’s got a point: the DA has hugely improved its showing from last time round. “I’m still very upbeat, I’ve had lots of coffee, I’ve had a couple of hours sleep, and I’m really excited by what I’m seeing on the board. This is a good day for the DA.”

The good vibes were rudely interrupted by another briefing from the IEC, where some disturbing allegations were raised about ballot boxes found in Alexandra and DA-marked ballots discovered in Pretoria. Even more disturbingly, the IEC knew nothing about it. They promised to investigate. In a room full of politicians, we’re not sure how much weight promises carry. DM