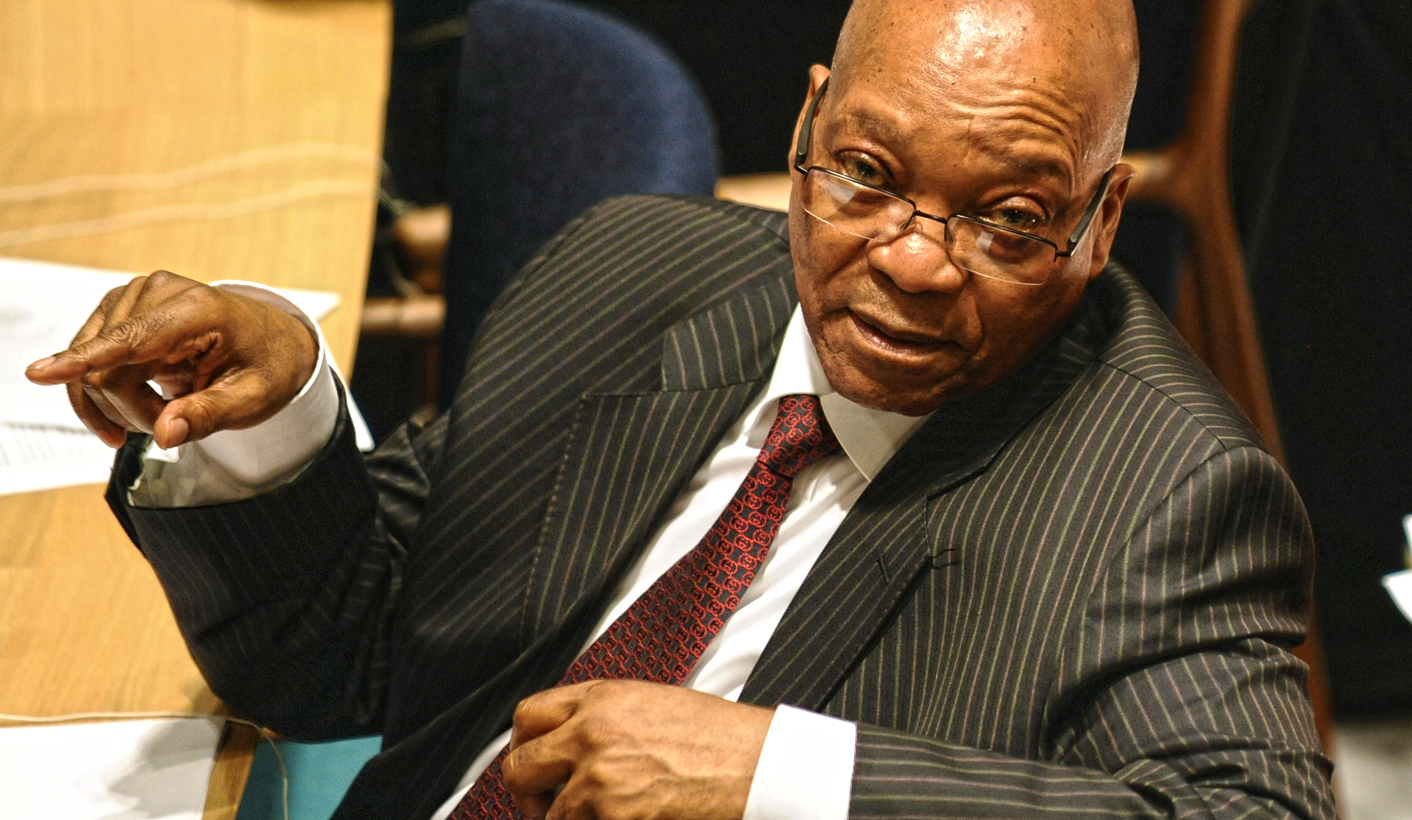 As the election day approaches, it is not the last-minute rush of activity by political parties which will take centre stage, but rather what the 12-person Parliamentary ad hoc committee does when they consider President Jacob Zuma’s response to the Public Protector’s report on the upgrade to his Nkandla residence. The problem, of course, is: what exactly is the president’s response to the report? The opposition wants Zuma to be subpoenaed before the committee; the ANC probably knows this will be political suicide days before the polls. While there will be fierce resistance to any further damage to the ANC, Nkandla will continue to haunt the party as Zuma’s first term peters out. By RANJENI MUNUSAMY.

A few days after Public Protector Thuli Madonsela released her Nkandla report in March, the Democratic Alliance (DA) Parliamentary leader Lindiwe Mazibuko requested an urgent meeting with the Speaker of Parliament Max Sisulu to discuss a motion to remove the President from office. Those were heady days – the report was sensational and the commentariat was in overdrive. Mazibuko, who was one of the complainants that initiated the Public Protector’s investigation, wanted immediately to elevate the matter to the next level: a Parliamentary investigation followed by a plenary debate and then a vote on her motion to impeach the president.

It is not the first time Mazibuko tried to get Parliament to discuss the conduct of President Jacob Zuma and force a debate to vote him out of office. She had been stonewalled on previous occasions by the ANC, which used its majority to block action against the president. So who would have thought that Sisulu would actually have acceded to Mazibuko’s request this time around, and especially during the Parliamentary recess and on the eve of the elections?

Mazibuko had thrown down the gauntlet when she made the request: “Parliament must now re-establish itself as the centre of executive accountability. The legacy of this fourth Parliament and the Speaker himself will rest on the decisions that are made in the coming week. I have every confidence that Mr Sisulu recognises the importance of this issue and will act in the best interests of accountability, the Constitution and especially, the people of South Africa.”

If the committee is confined to considering Zuma’s written response to the Speaker, then its work could possibly be wrapped up in a few hours. In a three-page letter submitted to Sisulu on 2 April, Zuma reminds the Speaker of the inter-ministerial task team investigation into the Nkandla upgrades and that the Public Protector had also engaged in an investigation. “This report also adopts a particular methodology, contains certain findings and recommends remedial action to be undertaken by inter alia myself as President and the various Ministers,” Zuma said.

Without delving into any of the findings or recommendations, Zuma then goes on to explain that he also proclaimed the Special Investigating Unit (SIU) to probe the matter. He notes that “a considerable amount of state resources have been expended in the conduct of all investigations and the compilation of reports”. (The “considerable amount of state resources” – R246 million to be exact – spent on the president’s home, however, does not crack a mention).

The only comment Zuma offers is the following: “Notwithstanding, there are stark differences both in respect of the findings as well as the remedial action proposed in the two reports. This much is clear from the reports as well as very public pronouncements made by the respective parties. In my experience in government I have not encountered such an anomaly.”

Zuma then undertakes that, on receipt of the SIU report, he will provide Parliament with a further final report “on the decisive executive interventions which I consider would be appropriate”. Zuma’s letter to the Speaker was accompanied by the Public Protector’s report and the SIU proclamation.

So what exactly does Sisulu want the ad hoc committee to investigate when he says it should consider “submissions by the President in response to the Public Protector’s Report and make recommendations”? The mandate itself is likely to be the first fight of the 12-member, multi-party ad hoc committee.

The announcement was made two days before the deadline for the composition of the committee expired. This means they have just four working days to conduct their work before Sisulu’s deadline expires. Mazibuko, who along with James Selfe represents the DA on the committee, now wants the Speaker to extend the timeframe for the committee to 5 May – two days before the elections. She also wants Parliament to be recalled for a special sitting on that day or the next day, 6 May, to consider the findings of the ad hoc committee.

But all Sisulu committed to in his statement was: “Once the ad hoc committee has completed its task, it will submit its report and this will be published in the Parliamentary papers and on Parliament’s website for public access”. While he might have taken the unexpected step of appointing the committee, that is probably as much latitude Mazibuko will be allowed. It will be bizarre if Sisulu convenes Parliament the day before the elections for a massive bun fight over Nkandla with an attentive audience of voters watching.

The short timespan is not discouraging Mazibuko from having grand ambitions about the committee’s work. She not only believes that the mandate is broad enough to discuss the contents of the Public Protector’s report and make recommendations, she also believes the committee should subpoena Zuma to testify before it. While Mazibuko and Selfe would probably get support for this from the three other opposition party members serving on the committee, the seven ANC MPs will probably steamroll any such ideas.

Zuma has already ruffled feathers with his offline comments on the election campaign about having to pay back money spent on his Nkandla home, as recommended by Madonsela. Considering how emotional the president gets on the subject, as witnessed during the Parliamentary question session and in media interviews, one can only imagine what he might say if he is pelted with questions from Mazibuko and company. If this happens as the Independent Electoral Commission is putting up its banners at polling stations around the country, it could impact voter perceptions and voting patterns.

Therefore it is highly unlikely that the seven ANC MPs on the committee have been given free rein. Their mandate is probably to contain the damage and prevent the president from facing any further scrutiny. Zuma, for his part, is probably not going to want to spend the last hours of his term playing Oscar and Gerrie with Mazibuko.

Whatever happens, and despite the ANC’s best efforts to keep its election campaign on track, Nkandla still looms large over the polls. The ad hoc committee, stonewalled or not, will keep the matter alive and on top of the news agenda for the next few days.

On election day, Zuma will cast his ballot at Nkandla at a school across the valley from his home. The cameras which will be on hand to capture the moment will no doubt pan across his homestead. There is simply no escape from Nkandla. It will be there for years to come, and long after Zuma’s retirement, as a constant reminder of rot and corruption, and how to escape the consequences. DM