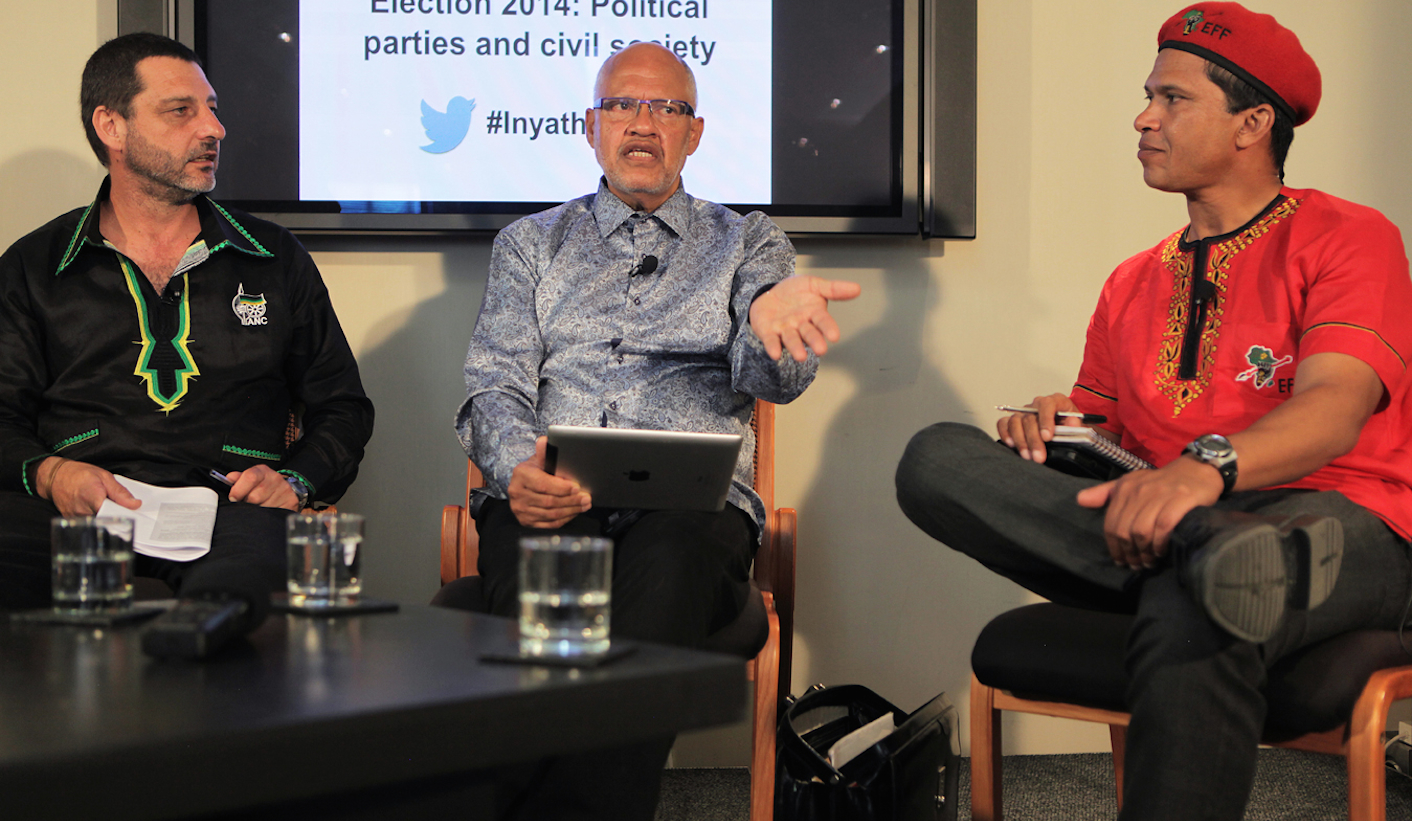 The sartorial choices, racial make-up and seating positions of a panel of political representatives from the ANC, the DA and the EFF who participated in a pre-election debate on the continuing role of civil society in Cape Town on Wednesday reflected more than just the issue at hand. By MARIANNE THAMM.

Seated centre stage in a light blue silk shirt with a paisley print was DA Federal Chair and Shadow Minister of Education, Dr Wilmot James, flanked to his right by the ANC’s local stalwart, Max Ozinsky, bearded and attired in an African-style shirt in the ruling party’s familiar black, green and gold. To their left sat the EFF’s local Premier Candidate, Nazier Paulsen, a red beret perched on his head and wearing a matching red, embroidered open-necked shirt with the party’s logo.

The debate was chaired by Shielagh Gastrow, founder of Inyathelo: The South African Institute for Advancement, a philanthropic organisation which provides support for South African civil society through a range of research, consultancy, mentorship and other programmes.

The Institute’s offices are housed in an old recently gentrified industrial building in the traditionally working-class neighbourhood of Woodstock and was packed with an eager crowd of representatives from various NGOs, foundations and civil society organisations who had come to hear the three parties’ views on the role of civil society 20 years into democracy.

It’s election season, so participants could perhaps be forgiven for nailing colours to their personal masts. Or not. James’ opting for a subtle, individual statement rather than a bold collective one at this low-key event was, of course, totally in keeping with the DA’s liberal ethos.

The racial demographics, too, of the panel reflected the peculiar diversity of the Western Cape – a white man representing the ANC with two black men (well, the Department of Labour as well as Jimmy Manyi might say ‘coloured’) speaking on behalf of the DA and the EFF.

In the final standoff, though, it was clear that experience and a firm grasp of policy, governance and the legislated role of civil society in our young democracy trumped repeat-button sloganeering, rhetoric and the generalisations of the newcomer on the political block.

Ozinsky and James, clearly comfortable with the realpolitik of governance and as representatives of experienced political parties, displayed the kind clubby bonhomie of rivals who understand the rules of game in that forum – an intimate debate.

At some point Ozinsky conceded that the DA and the ANC shared many ideals.

“The ANC and the DA respect each other. We know where they are coming from,” opined Ozinsky as Paulsen shot a wary side eyes in their direction.

To which James replied that while there was much common ground between the two parties, there were two key differences.

“We are not the same but we want the same things. We disagree on two fundamental questions. One is the ANC’s high tolerance of corruption and we see this with Nkandla, but we must add that we do admire Max in this instance as he has worked tirelessly against corruption. The second is we have a different approach to how to grow the economy and jobs.”

As the morning moved on, and the more Paulsen spoke of “our Leader and Commander-in-Chief, our president-in-waiting, Julius Malema”, the EFF’s plans to nationalise the country’s mineral wealth and “limit and control the power of the state” (is that EFF policy, actually?) and the fact that the EFF was “not a boardroom political party, our Commander-in-Chief has consulted in the concentration camps of the Western Cape like Blikkiesdorp” the more Ozinsky and James looked like hugely sensible voting options.

Ozinsky kicked off the debate, using the opportunity to retell the ANC’s “Good Story” – reminding the audience that the party had itself emerged from the ranks of citizen activism and had, as a liberation movement, recreated mass-orientated civil society after the repression of the 1950s, 60s and 70s.

“We have had this debate where we see the ANC itself as part of civil society while remaining a political party,” he told those gathered.

In terms of the Constitution, the party remained committed to deepening democracy “through public participation in various spheres including school governing bodies, community policing forums and health and environmental forums”.

“The ANC has taken seriously its role as an organ of civil society into the new state we are still building, but we know that is not a straight line that leads to the sunset,” said Ozinky.

As the party in opposition in the province, Ozinsky of course also took the opportunity to criticize the DA, saying that since it had come to power in 2009 he had seen the closing down of the public participation process.

Ozinsky concluded saying the ANC had, in its election manifesto, focused on how the party could work with civil society to deepen democracy and that central to this was the National Development Plan.

“This is a process that has looked at deepening the involvement of civil society as well as the state’s partnership with the private sector, organised labour and civil society to create conditions to accelerate economic growth and stimulate jobs.”

Wilmot James provided the audience with more specific ways the DA would engage with civil society, including rewarding those public institutions that “develop innovative responses to society’s challenges.” He also used the word “hegemony”.

“An independent and vibrant civil society is central to the preservation of the open society and acts as a bulwark against the stage imposing a hegemony of thought and truth,” he said.

And then there was the detail and concrete commitment so lacking in the other, more generalised presentations.

James said an additional proposal his party was making was to make use of longer funding cycles and to set up a dedicated research and monitoring unit within the Department of Social Welfare and Development in the Western Cape “to support public reviews and to ensure priorities in funding for organisations that support the provision of services that should actually be provided by an efficient state. We will also fund organisations that fill the gaps in public service.”

Paulsen’s address sketched a picture of South Africa as “the most unequal country in the world” and set out the conditions of the launch of the EFF, emphasising its wide range of support from myriad of civil society organsiations, its commitment to diversity, its respect for different points of view as well as its determination to remain “an emancipation movement with real grassroots support”.

“Civil society must expose the corrupt activities of public officials and lobby for good governance. Civil society must educate people about their rights and obligations, help with election campaigns, to monitor polling stations and to ensure that vote counting is free and fair,” Paulsen offered the audience of active participants in civil society.

The hour-long debate ended without too much controversy – and few questions or statements about the “depth” and scope of civil society. There also could have been more about how the interests of this country’s poorest and most vulnerable could be served by this unique possibility for partnership with government. DM