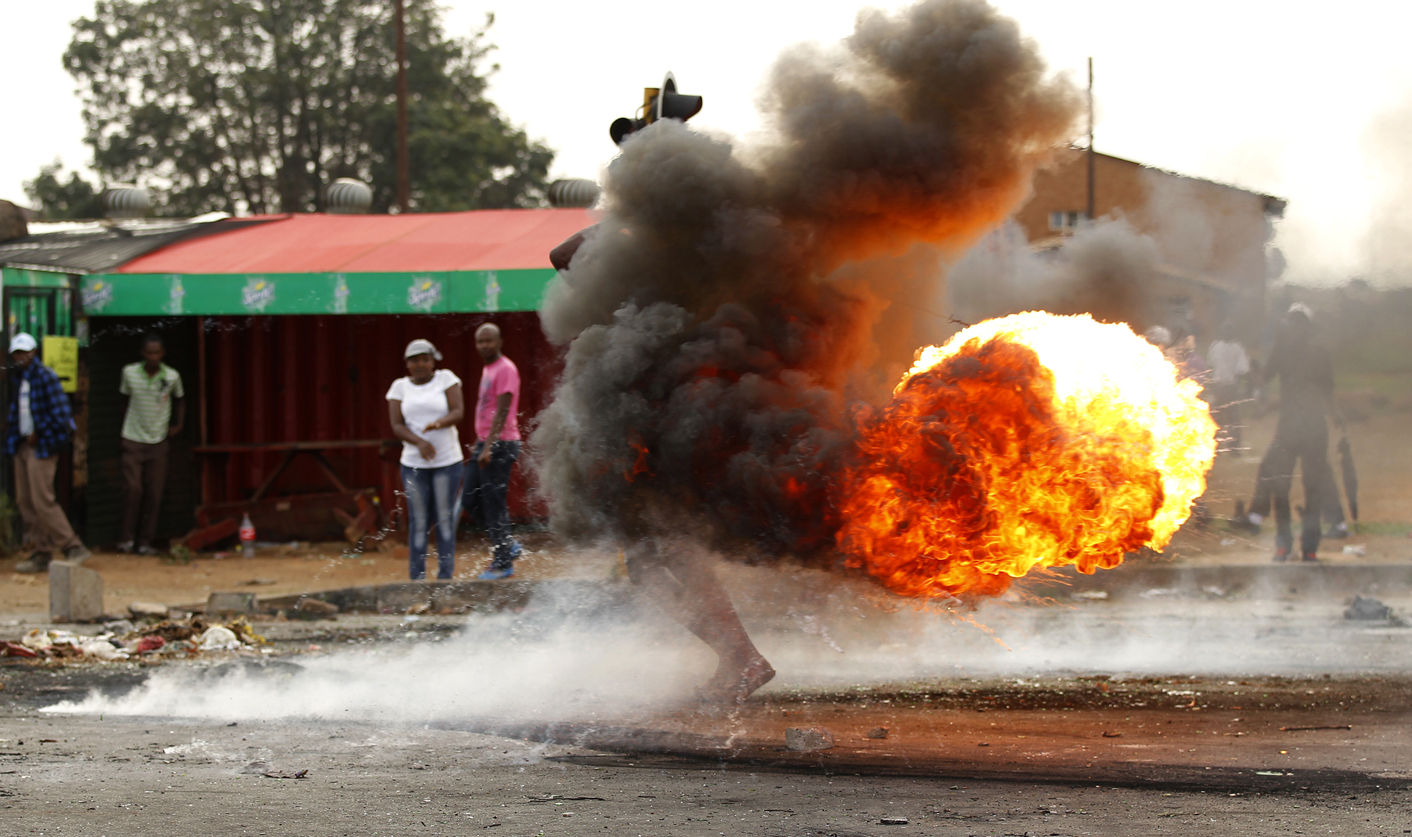 A total of 569 protests in three months. Some 122 of these turned violent. That’s an average of six protests a day in just one of South Africa’s nine provinces. Finally, Gauteng’s top cop is speaking directly to government about a situation which appears to be spiralling out of control. ALEX ELISEEV wonders whether anyone is listening?

In another 24 hours of mayhem, protesters in Bronkhorstspruit torched their local clinic and library, having already turned their police station and some municipal buildings into giant bonfires of discontent.

Across the province, in Sebokeng, another protestor was shot dead as running battles continued between residents and police officers deployed to keep the peace.

At the same time, in Parktown, at the police’s provincial head quarters, Gauteng commissioner Lesetja Mothiba gathered journalists to give a progress report on some high-profile cases and to condemn what the protestors were doing.

It was a rare (and welcome) opportunity for reporters to listen to the prepared statement and then to fire questions at Mothiba and his top brass.

The commissioner cut straight in, calling the actions of the protestors “pure criminality in the form of vandalism”. Given that two police stations have now been attacked and destroyed, he would have been forgiven for using stronger words.

Mothiba then went to reveal something quite staggering. He read out the statistics of how many protests have flared up around the province: 569 in the last three months. On average, one in five of them turned violent.

“Places like Khutsong, Bekkersdal, Roodepoort and now Bronkhorstspruit were heavily affected,” he said. “It was protest actions like these that have stretched our resources to the limits.”

These clashes have been bloody. Just last month, at least eight protesters were shot dead. Up in Tzaneen, Limpopo, one protest left about a dozen police officers injured, 19 police cars damaged or destroyed and two demonstrators dead. It’s as if someone has suddenly turned up the volume of violence, leaving us to listen and watch in horror.

Mothiba was asked for his thoughts about the relationship between the police and communities. The fear is that officers are increasingly becoming the enemy during these confrontations.

In front of the microphones and the cameras, he claimed that the relationship remained sound. He was quick to point out that the protests aren’t directed against the police and that officers are merely caught in the middle while trying to restore order. He defended police management and the command and control structures, while assuring that officers were well trained and equipped. He also came to the defence of his men and women in the streets, telling the public to stop being “armchair critics” and pretend to know what it’s like to walk in those shoes. Again, given the havoc up in Tzaneen and in Bronkhorstspruit, he had a point.

But it was afterwards, in an interview with this reporter, that Mothiba did something few policemen are brave enough to do. He diagnosed the problem for what it is and issued a stern warning to government, from municipal managers to President Jacob Zuma’s administration.

Mothiba admitted that the police is deeply worried about the protests and what they are doing to the relationship they have with communities.

“Over the years, we have been building relationships and this has not been smooth sailing,” he conceded, going over some of the CPF initiatives and other partnerships which exist. “This present situation of unrest is not good for the SAPS.”

Then came the warning of what may lie ahead.

He couldn’t say it but what this translates into is: “Start doing your job!”

Mothiba wasn’t finished: “It is not easy when community/police relations are in tatters. It’s not easy to re-establish them. It’s going to be painful. It’s going to take blood and sweat. We hope this is arrested as soon as possible.”

For someone who takes care to quote his minister during a speech, those are bold and emotive words.

According to the Institute for Security Studies, the police’s Public Order Policing units are themselves in tatters. They are desperately under-staffed, under-skilled and under-equipped. Often, regular uniformed officers are pulled in to help during protests, which can lead to nightmares. The ISS tells us command and control lines are broken and in some cases, officers behave like criminals by, for example, shooting a protestor in the chest from inside a car, driving away and trying to keep the whole thing a secret.

But Mothiba is right: what is happening now requires firm intervention from government. Elections are coming. Emotions are being stirred by those who are after votes. There are new, more militant players on the scene. Tension between cops and protesters is at an all time high and it’s taking less and less to set off triggers. Scandals like Nkandlagate are not helping. Neither is the situation on the mines. Nor the fact that billions are being flushed by government down the drain.

President Jacob Zuma has waited too long to speak out (sort of, through a statement) about these protests. He called for restraint, sent condolences and reminded everyone that with constitutional rights come responsibilities. But what he has failed to do is show how urgent and serious the situation is. To lead from the front. To demonstrate that it’s a priority. To (as Mothiba points out) “engage people”, speak to them and try calm the anger.

The massive socio-economic problems sparking these protests cannot be fixed overnight. In a week. In a year. But somewhere it must start. Something has to be done now. When clinics and libraries are burning and police stations are being overrun, it’s time to move past expressing “serious concern”. It’s time to look at the figures General Mothiba has provided and to lead. DM

Photo: A protester swings a burning tyre as they take part in a service delivery protest in Sebokeng, south of Johannesburg, February 5, 2014. REUTERS/Siphiwe Sibeko