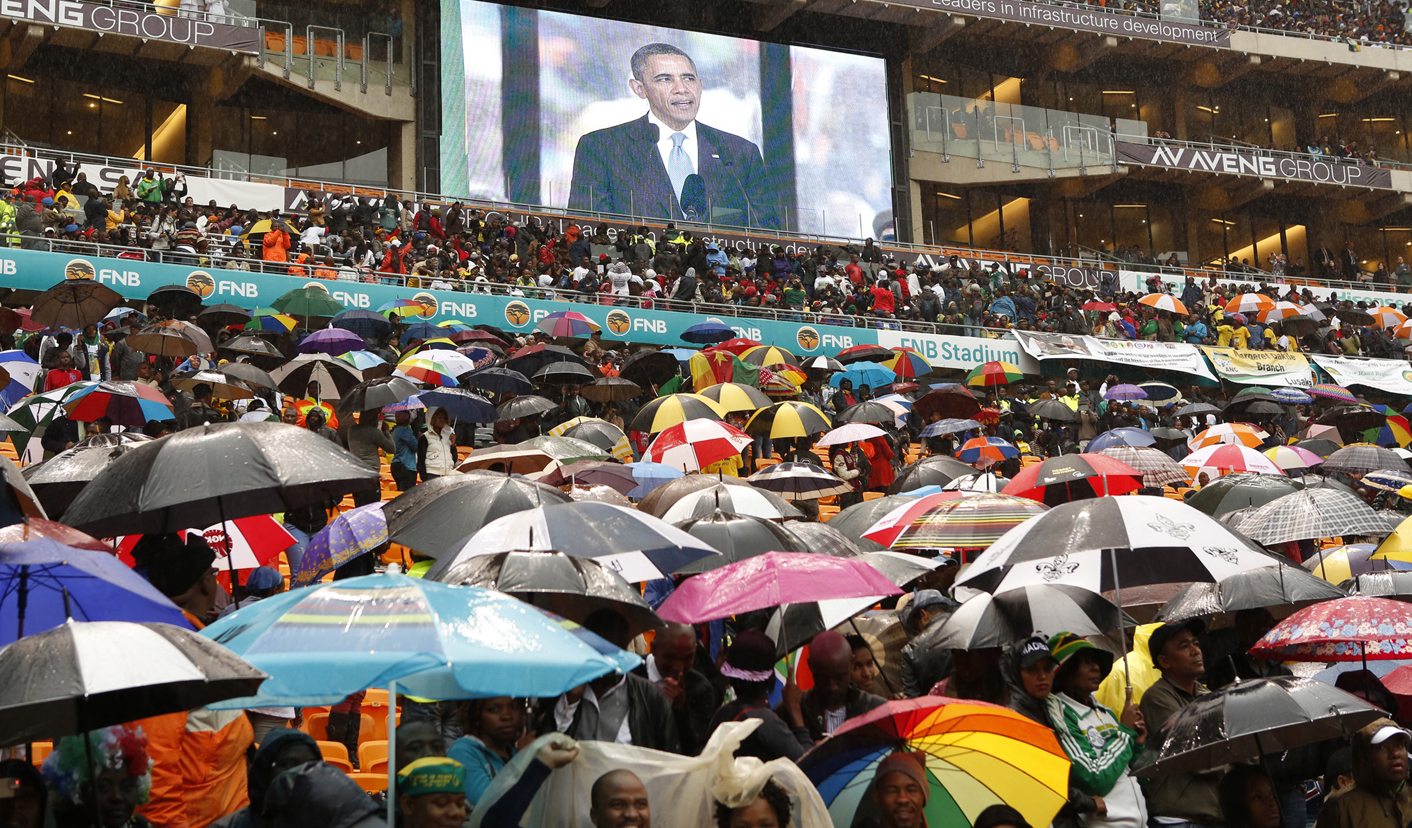 It was perfect, and it wasn’t pretty. But the FNB Stadium event that memorialised Madiba was not just a celebrity hug-fest. Something else happened—the spirit of the real Mandela emerged. By RICHARD POPLAK.

According to the man on the stage, who was once a mining unionist and is now a mining magnate, the rain served a purpose. It meant that the heavens were open, and the soul being memorialised was allowed a smooth passage to the uppermost reaches. This was not a meteorological phenomenon, insisted Cyril Ramaphosa, deputy president of the African National Congress, but a metaphysical one. Nelson Mandela was in the process of being received, and we were there to help cheer him onwards.

The interfaith proceedings, which smudged the words of a rabbi into those of an imam into the incantations of an archbishop were, by design, meant to evince the spirit of the icon whose passing had inspired the leaders of 70-odd nations to take to the heavens themselves, and fly here in order to help regular South Africans (this was described as the “people’s memorial”) to commemorate the passing of a father. It was the sort of symbolic gesture that Mandela built his brand on, but in the atmosphere of the FNB stadium in the gloom of this special day, it rang somewhat off key.

For this event had many faces, and not all of them were benign. In the stands, the marshals policing us—asking mourners to butt out their cigarettes and tone down their cheers—belonged the ruling party. A woman wore a “decade of the cadre” t-shirt, and the ANC logo was worn as a cape, painted on vuvuzelas, hung from the balconies. This was, at some profound level, politics masquerading as memorial. The “togetherness” theme started to weigh heavy, because by now it had started to feel like a narrative imposed.

We watched the screens as the dignitaries rolled in, a momentary inversion of the power matrix—beneath our shoes, presidents and prime ministers and celebrities entered the underground tunnels before taking their rightful places above us in their VIP aeries. When in history have the likes of Palestinian President Mahmoud Abbas and the president of the United States, Robert Mugabe and the Archbishop Tutu, Bono and Teodoro Obiang Nguema shared the same 200 square metres of concrete and glass? Again, this was the sort of unity that very few men in history could inspire—when the leaders of two countries that have been at war for generations can share a handshake photo-op without (obvious) reservations, that is power. That is Nelson Mandela re-conceived as a saint whose presiding value was inspiring a mulchy peace between opposites.

Did any of the people at the people’s memorial care whether this day nudged a rapprochement between the United States and Cuba? Probably not. The problems in the FNB Stadium were local, not universal. Nelson Mandela was the liberation hero and president of a country that is riven by differences, some so microscopic that to outsiders they aren’t differences at all. But those in the stands knew that this was an opportunity to express something far more valuable than the vaguery of inclusion. It was time to stand by a value that Mandela was willing to die for: opposition.

One might say that on a day that the world gathered to celebrate the passing of a legend, petty politics had no place in the proceedings. But those many mighty in attendance were here to add luster to their own tarnished brands—Barack Obama, whose presidency is under threat from a crappy website, gave one of the finest speeches anyone listening will ever experience in their lifetimes. He eulogised a great man, and was rendered great in the eulogising. It was a dazzling performance, oratory of the highest quality.

Perhaps it was time for those in the audience to rise above. Rise above what, exactly? Every time South African president Jacob Zuma appeared on screen, he was booed viciously. This was a lesson to many of the great men and women in attendance, including Barack Obama—who has never wandered into an unmanageable non-partisan crowd since he was elevated to the presidency—that freedom isn’t pretty. It doesn’t speak in fancy sentences and evoke dainty sentiments. It isn’t saintly, and it isn’t inclusive in the way that inter-faith rabbis and imams understand inclusive to be. And yes, South Africans may yet rip each other to pieces over the differences of outlook expressed in that stadium. But the greater likelihood is that the battles will unfold in other arenas, saving us from the worst of ourselves. Because the man being memorialised helped set those booing free.

This was South Africa engaging in a family fight in front of the universe. Where was the respect? Where was the love for the figure whose likeness shone forth from the Trinitrons? Anyone who doubts the reverence that most South Africans feel for Madiba is largely insane. But a reverence for a president that has failed to live up to the values evoked by the man who first occupied the office? That, unfortunately for Jacob Zuma, is not built into this country’s DNA.

Teodoro Obiang Nguema, the monster who runs Equatorial Guinea, does not need to return home with only a Mandela Memorial swag bag and some bottles from the Hyatt mini bar. He needs to land in Malabo with those boos roaring in his ears. What of Salva Kiir of South Sudan, who has recently canned his government, or our neighbour Robert Mugabe, who had been manifestly unkind to his fellow citizens? And what of Barack Obama himself, whose oratory soared above all of the tiny, deadly pragmatisms he’s practiced over the course of his years at the helm of the free world? When he and his peers next conjure the memory of Madiba, they may choose to recall that Tata was not just a smiling avuncular gentleman, but something far more dangerous, and far more radical than all that. He was the man who created a country where nothing is simple and nothing perfect, where unashamed boos pour down from the heavens along with the rain. And where the spear, ever sharp, is never kept far from the microphone. DM