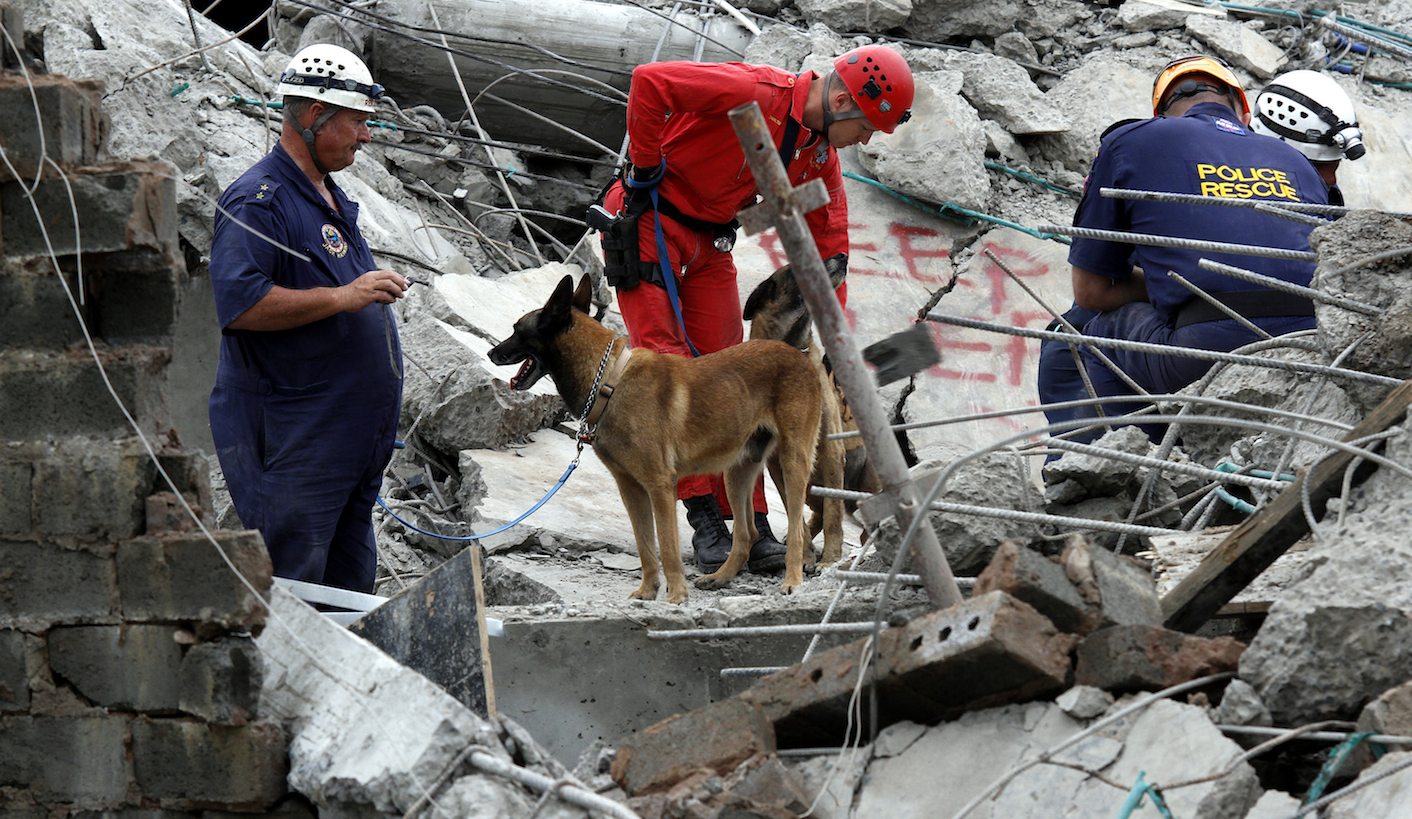 The Ethekwini Municipality just never learns. For ten years, the ANC-dominated council has consistently – in the face of community protest, political opposition and outraged newspaper headlines - given lavish city tenders to a small group of ANC benefactors. Now, after a partly-constructed shopping mall in Phoenix collapsed on Tuesday afternoon, killing one person and severely injuring another 29, it emerged that the developer of the mall is one of the ANC's most favoured (and possibly most controversial) tenderpreneurs. The Ethekwini ANC might now conceivably find itself in a fix that it can't talk its way out of. By NIKI MOORE.

A month ago, the city went to court to stop any building work on the Tongaat Shopping Mall, a development by Gralio Precast, because the plans had not been passed. Despite this, building continued, and on Tuesday a soccer-field-sized portion of the second floor collapsed after supporting scaffolding was removed. Owner of Gralio Precast, Jay Singh, apologised for the accident, but rather insouciantly claimed that it was a well-known fact that it was quite normal for building to commence even when building plans had not been passed.

A team of engineers would be flown down from Johannesburg, he said, to find out what went wrong. He also said that the disaster had nothing to do with plans, but was an engineering oversight. He did not seem to think that his company’s flouting of a court ruling – that ended in death and injury – was a serious offence.

Singh has good reason to feel casual about a collapsed building. He has had a close and beneficial relationship with the Durban municipality since 2003. Singh’s most prominent achievement was the acquisition of the Durban City Bus Service for R70 million in 2003. By 2009 the company had collapsed despite several municipal bail-outs, its assets were stripped, and the city repurchased it in 2008 for R405 million.

Since 2004 a company owned by Singh’s wife and son, Shireen Annamalay and Ravi Jagadason – Woodglaze Trading – has received tenders and contracts for the provision of low-cost housing to a conservative estimated value of R500 million. Annamalay also owns Atomic Demolishers, which gets city demolition contracts – most notably the contract to demolish the Queen’s Park soccer stadium that made way for Durban’s World Cup stadium.

Woodglaze Trading has faced many community marches, petitions, and court applications as a result of shoddy workmanship. As far back as 2003, Woodglaze (then known as Palm Civils), got the tender for a low-cost housing project in Verulam, called Hammond’s Farm. The cost of the project rocketed from R68 million to R351 million because units had to be demolished and rebuilt. The Burbreeze development in Tongaat followed the same pattern: costs leapt from R18 million to R57 million because houses were substandard and needed to be rebuilt.

In March 2013, the Phoenix Residents and Tenants Association served court papers on Woodglaze to prevent alleged illegal eviction. Residents claimed they had stopped paying rent because of alleged irregularities in the way the houses were built and managed. The then-MEC for Human Settlement, Ravi Pillay, intervened and told householders to report corruption and mismanagement, but then did a rather surprising about-turn and cleared Singh’s company of any wrong-doing. A month later, residents of a middle-income complex called Treehaven reported Woodglaze Trading to the National Homebuilders Registration Council, for alleged shoddy workmanship. The residents’ committee said they were tired of reporting defects such as cracks, leaks and ill-fitting doors to Woodglaze with no result. The residents claimed that they had entered into rent-to-buy agreements, but that the state of the houses precluded any bank loans.

A consulting engineer on a low-cost housing project, speaking on condition of anonymity, claimed that developers deliberately used low-quality materials and sub-standard building methods in order to claim more money to repair defects in their buildings. This allegation could perhaps be borne out by statistics: of the 9,387 houses built by various contractors to the municipality, 6007 had to be completely demolished and rebuilt. According to the KZN Department of Housing report, 80% of the 27,000 RDP houses built by the municipality are substandard and required major upgrades and repairs.

For Singh and his various companies, the contracts kept pouring in despite consistent allegations of shoddy work and corner-cutting, and despite a criminal conviction for bribery, when Singh had paid a city official to ignore substandard work.

Gralio Precast, the development company for the collapsed Tongaat Shopping Centre, was in February 2012 given a R70 million tender for the first phase of Cornubia, a R20 billion flagship housing project near Umhlanga. The company also obtained a R22 million tender for supplying access roads and bulk water to Cornubia. Gralio Precast has received several Section 36 contracts from Ethekwini (a Section 36 contract is issued in emergency circumstances). Opposition parties in the council were appalled that Singh should get contract after so many complaints of shoddy work had been received.

When the council opposition to all of Singh’s contracts was highlighted in the media, the municipality responded that the tenders had been awarded under the previous administration and that they were investigating. In the meantime, Gralio was also awarded a contract worth more than R27 million for the first part of the Emtshebheni housing project in Inanda. The Woodglaze has also landed the contract for the proposed multimillion-rand Westville Triangle middle-income housing development.

Singh is one of a very short list of Durban tenderpreneurs whose names are inextricable from the word ‘controversial’. Five or six names crop up in connection with most city tenders. Opposition parties claim that tenders are often retro-fitted to suit the tenderers. Often these individuals are shareholders in each other’s companies. Their contracts with the city are notorious for high prices and high failure rates.

They have all been extensively documented in the media and exposed by opposition parties. Political researcher at Rhodes University, Richard Pithouse, has documented a number of questionable deals and individuals, saying that housing provision in Ethekwini is less about housing the poor and more about fast-tracking wealth accumulation for ANC party funders.

The city simply cannot say it has never been warned. For ten years, questions have been asked about the relationship between Jay Singh and the Ethekwini Municipality (not to mention the others on the list). Up till now, the only casualties of Ethekwini’s laissez-faire attitude to personal and political enrichment have been the city’s ratepayers. Now that people have been injured and killed, perhaps it is time for answers. DM

Photo: Rescue workers attempt to determine if there are any more injured under the rubble at a collapsed mall construction site in Tongaat, north of Durban, KwaZulu-Natal on Thursday, 20 November 2013.The mall collapsed leaving at least one person dead and 29 injured. Picture: Giordano Stolley/SAPA