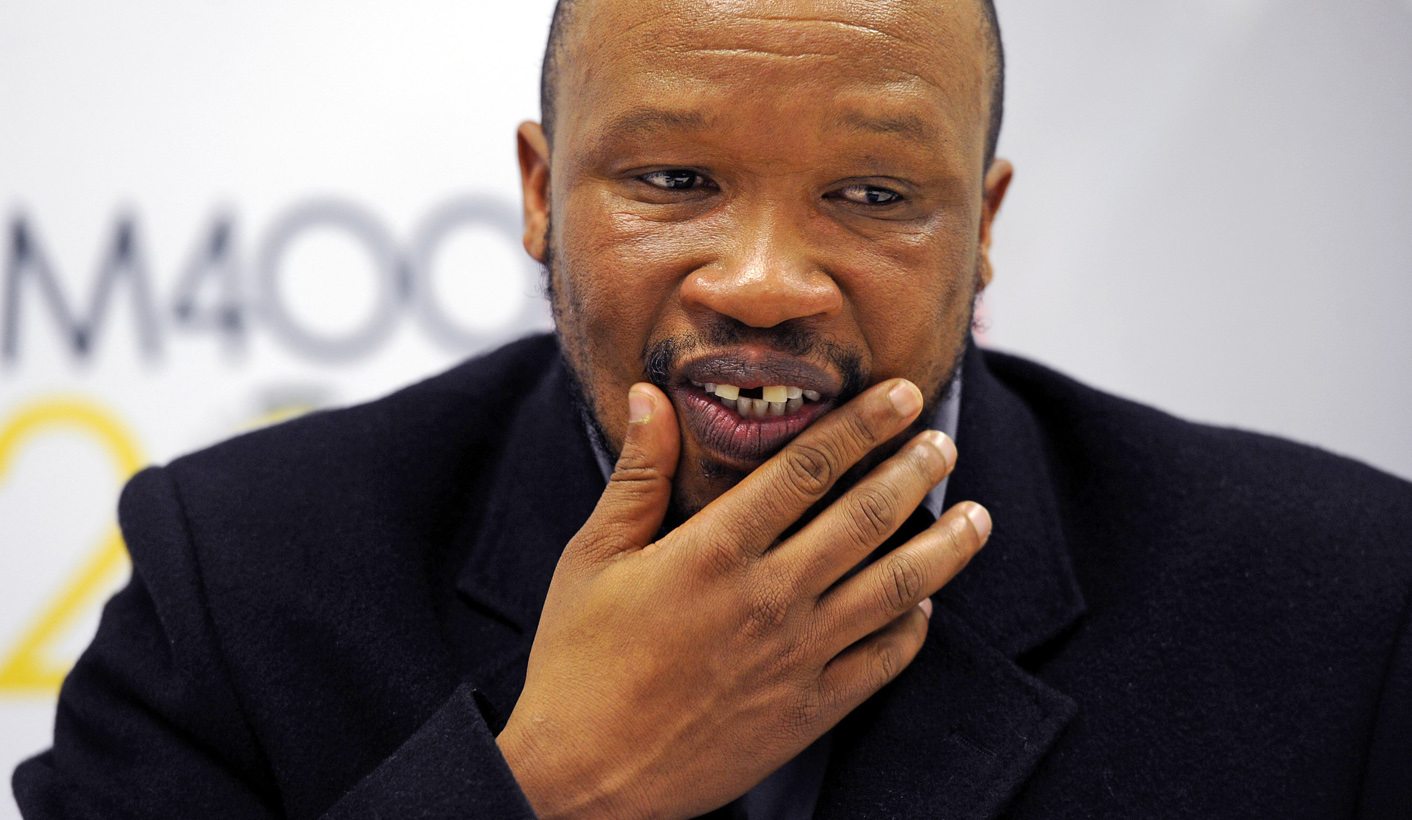 Secretary-general of metal workers' union Numsa Irvin Jim is seen during a Numsa media briefing on the outcomes of its NEC meeting on Thursday, 11 July 2013 in Johannesburg. Picture: Werner Beukes/SAPA

The split in Cosatu has been moving at such a slow pace that sometimes it is easy to forget it's happening right in front of us. By the standards of our politics, there's been very little of the usual sound and fury of late; the shouts and insults that usually mark our catalytic events strangely disappeared over the last few months. But as Cosatu's Central Executive Committee continues its meeting this week, there's no papering over the cracks that can really be done. Cosatu is splitting; a better picture of how that split will happen, and of the timing of it, is finally beginning to emerge. And when it comes, it could all happen very quickly indeed. By STEPHEN GROOTES.

For the moment, the internal politics of Cosatu has been in limbo. Zwelinzima Vavi has been suspended as general secretary. S’dumo Dlamini, as president, has been sitting on calls for a special Cosatu Congress, his own version of go-slow. The only group really making the running has been the National Union of Metalworkers of SA (NUMSA), which’s been edging, and we do mean edging, towards that special conference of its own, now due just next month.

For a while, it’s been known that this conference will be a key moment. The decisions made here will really matter. But there isn’t actually much about the conference that is really in doubt. As always with special conferences, they’re only called by the leadership, if the leadership already knows what the end result will be. As Dlamini might tell you, should you catch him in a very unguarded moment, one of the privileges of leadership is that while you can’t always control events, you can usually delay them, if you want to. The fact that NUMSA’s leaders are pushing this conference ahead means they know what the outcome will be, and that they are fully in favour of it.

The stated reason for this conference is to decide whether NUMSA should still stay on in the tripartite alliance. This doesn’t mean that NUMSA members will debate whether they should leave Cosatu, but whether they should stop mobilising for the ANC. Coming ahead of an election, it’s quite a big decision to make. But it’s obvious which way the decision will go.

NUMSA will decide to leave the Alliance.

One of the strongest arguments it could use would be to simply point at Cosatu’s declaration from its last conference (just last year) and to ask how many of those policy points have been implemented. The short answer is, none. Instead, Cosatu has become more and more marginalised within the Alliance. Or, to be brutally honest, Cosatu’s been ignored. Look at the Youth Wage Subsidy. It’s now called something else, but it’s law. E-tolls are well on their way, despite Cosatu’s very vocal opposition. And there is still no real change to the ANC’s economic policy. All of this will be used as proof that being in the Alliance is not getting workers anywhere.

But once that decision is taken, NUMSA’s position within Cosatu becomes even more precarious. Because it will still actually remain part of Cosatu, while not being part of the Alliance. This may sound a little odd, but there is in fact precedent for this. The banking union SASBO is a member of Cosatu, but has decided, as a union, to remain apolitical. So it’s in Cosatu, but not the Alliance. NUMSA could well follow the same path.

However, that path wouldn’t end there. Because NUMSA, and the other unions, have written to Dlamini to demand the special Cosatu conference, but still have that demand outstanding. At some point that conference must actually happen. Dlamini has said that he is not delaying this conference, but that first the CEC must draw up an agenda, and then he must sort out the logistics. NUMSA’s response has been to offer to pay for the conference, to even find a venue for it. As Dlamini hasn’t yet accept those offers, its becomes plainer that he is stalling.

And he’s stalling because the conference would really be about the future of two people, Mr Dlamini and Mr Vavi. And if he were confident of beating Vavi in a vote at a conference, he would have organised it already. Instead, he’s likely to continue to play for time, and hope that perhaps the deck changes. He might even hope that he’ll get a chance at going into Parliament, and thus wouldn’t need to fear losing his Cosatu job.

Either way, at some point NUMSA and its allies would have to give an ultimatum. A special Cosatu conference by this date or else. Or else what? would be the obvious retort.

The answer to that would have to involve yet another conference of some sort. And this would be the the real big step. This would be the ultimate move, the Big One, the one where officially Cosatu splits.

But NUMSA would not be out on its own. Sure, it’s the biggest Cosatu affiliate, with the most members, and has resources of its own. But it cannot go it alone; that would look more than egotistical. It also needs to make sure that it gets the politics of this right. First prize could actually be to be expelled from Cosatu. That would make NUMSA look like the victim. But failing that, it would need other organisations, and perhaps not just other Cosatu affiliates, to give the whole project legitimacy.

What could well happen then would be a completely different gathering. A conference where there is a bid to become the proper and “real” voice of the workers. Some kind of workers’ conference, where every organisation that represents workers is invited. Well, we say all, but Dlamini can watch it on Twitter. But the other big union federation, FEDUSA, and the other sometimes forgotten grouping, NACTU, would certainly receive their invitations. Perhaps other civil society groups would come as well. Mark Heywood and Section27 are certainly on friendly terms with Vavi, considering that the two have done business in the past.

The end result of that conference would be something that more than resembles Cosatu. It would be a strong grouping of various organisations and unions, many of them with their own members, and resources, and experience of organising people. This group would, almost overnight, come to be a very real political power.

It would probably, by then, be too late to contest next year’s elections. And the history of parties formed just before elections in this country is not great. Think Cope, the United Democratic Movement, even the Independent Democrats. But that wouldn’t really be the main aim, for the moment anyway. The main point here would be that suddenly there would be an organisation that could rival the ANC and Cosatu in terms of membership, and the ability to get people to do things, like march and strike.

And what would give it really important power, would be that it would be politically independent. There would no membership of the alliance to hold it back. No late night phone calls from Comrade Jacob when the strike was really beginning to bite government. No political solutions to industrial disputes. Instead it would be a formation that actually represents workers. It would be the body that those who have longed for Cosatu to leave the Alliance really wanted.

But boy, would its politics be Left-wing! Like, to the Left of Jeremy Cronin Left. The most likely policies it would follow would be taken from NUMSA’s policy documents. And they can be summarised in two words:

The formation of a group of this size and power would change our politics. The days of the ANC getting what the ANC wants could pretty much be over. There would be a very real contender for the 2019 elections. A party that is left-wing, organised, with struggle legitimacy. It would also, how do we say this, reflect the majority of the country’s population. It would be unlikely to tie itself in knots over issues like employment equity.

However, it cannot be presumed that Gwede Mantashe is just going to sit on his hands in Luthuli House. He will know what’s in the works. So will plenty of other clever experienced people who will want to frustrate NUMSA and its allies. Which means how this all plays out is far from certain.

But it is now very clear that the next few months, before the election, could well turn out to be more important for our future than the actual election itself. DM

Photo: Secretary-general of metal workers’ union Numsa Irvin Jim is seen during a Numsa media briefing on the outcomes of its NEC meeting on Thursday, 11 July 2013 in Johannesburg. Picture: Werner Beukes/SAPA