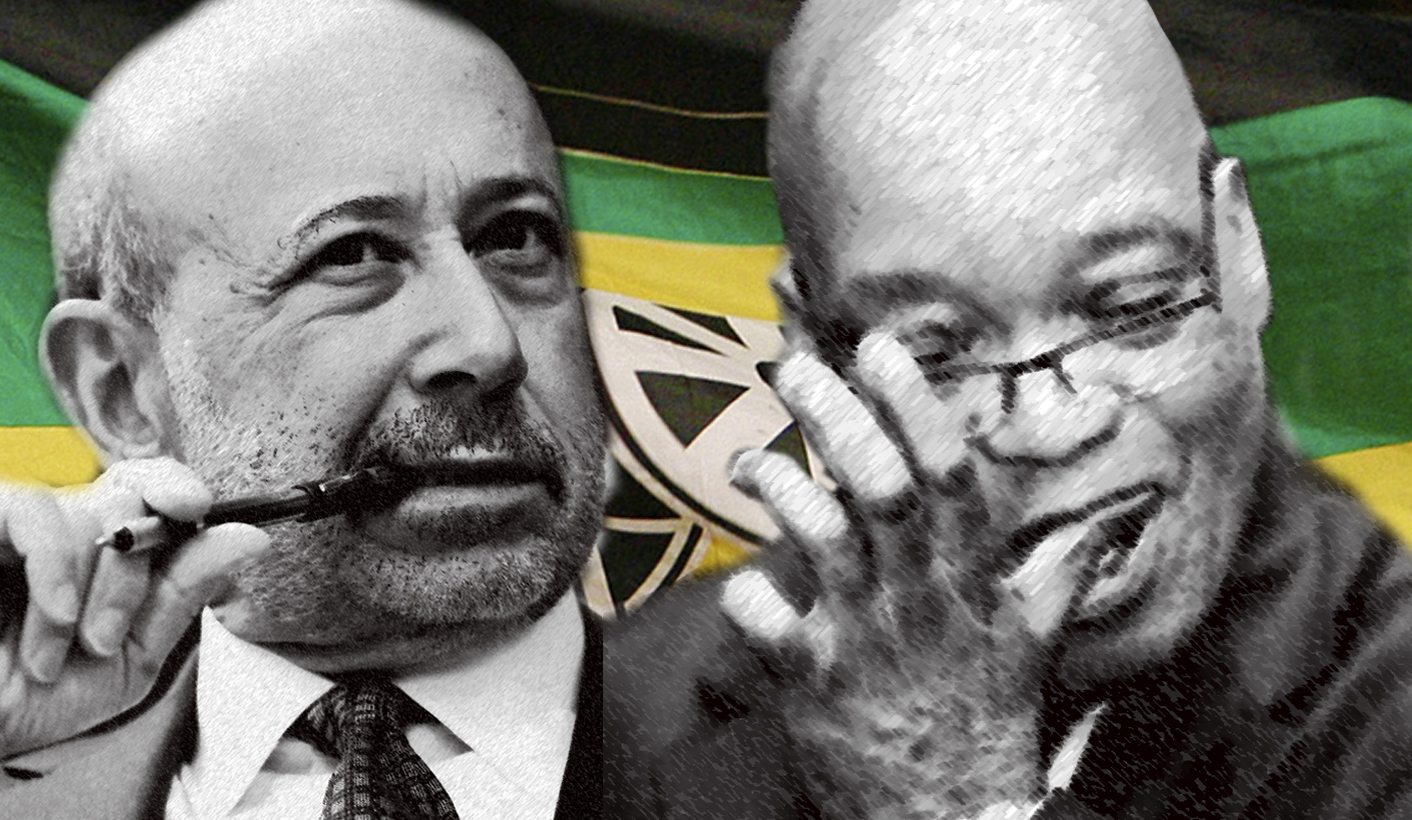 Goldman Sachs recently released a sterling work of fiction entitled “Two Decades of Freedom—A 20-year Review of South Africa”. Although the foreword is attributed to Colin Coleman, Goldman International’s head of the South African Office and Investment Banking Division, the report—ostensibly meant to take the temperature of the country’s economic present—reads like it was knocked together by Mac Maharaj during a day at the spa. Here’s why it could end up being lethal. By RICHARD POPLAK.

In these heady days, you know you’re reading economic report on an African country written by an American financial institution when the proceedings kick off with a Nelson Mandela quote. In the case of Goldman Sachs’s latest work of nonsensical spin-doctoring, we are treated to a line culled from President Madiba’s inaugural speech in 1994, which reminded us that “the people of South Africa have spoken… They want change! And change is what they will get. Our plan is to create jobs, promote peace and reconciliation, and to guarantee freedom for all South Africans”.

Africa Rising, y’all. Get on the bus.

If “Two Decades of Freedom—A 20-year Review of South Africa” were adapted into a corporate video—and I’m by no means sure that it hasn’t been—it would open with a slow pan of giraffes browsing on the savannah, followed by images of a multi-ethnic children’s choir singing “Shosholoza”. To anyone who has spent more than four minutes in this country not stoned on magic mushrooms, the tone of the report seems weird-ish, the numbers so wildly spun that it resembles a Lotto raffle—and guess what, we’re all winners! Why, one wonders, did the planet’s biggest, scariest money shop go all gooey on Nelson Mandela’s South Africa when a mature, solidly researched, unbiased report might’ve smacked our government out of its abject complacency?

We’ll get to that in just a moment.

Let’s start by acknowledging that South Africa pre-1994 wasn’t a country, but a mostly insane fiefdom run for the benefit of a narrow white elite and their four million or so pilot fish, built on the backs of tens of millions of indentured servants who got bupkes out of the deal. A précis: fiscal mismanagement garnished with sanctions left the country totally broke-ass by the early 90s. Combine this with a worldwide recession, and things weren’t premium. Yes, there was infrastructure. Yes, there was a banking sector. Yes, there was industry. But the country was in the crapper, and it was the new government’s job to gingerly pull it out, dry it off, and try to move the party from the bathroom into the kitchen. Not easy. But not impossible. Like good sports, in 1994 we cracked open the economy, ensured that our “partners” could make lots of money, while they in turn helped to make a new narrow elite very wealthy. We then popped the folks who were in the crapper back in the crapper, and generally got on with it.

The Goldman report isn’t really interested in historical context until mid-way through the document, and that’s probably because historical context is a downer. Instead, we kick off with a befuddling non sequitur: “The South African population is even more African dominated today”. Um, I don’t… I mean, I guess so? This is presumably a reference to our demographics, and one assumes that the use of an unloved and unmissed euphemism (black = African; white = European) is just an unfortunate cultural snafu. But the report officially goes off the rails just a few sentences later: “This fact [the part about South Africa being “even more African”] dominates the political and commercial landscape and makes the African community the key determinant of the political and economic life of the country”. Sorry, the “African community”? Suddenly, thanks to Goldman Sachs, 45 million black South Africans represent a solid bloc, unified in determining “the political and economic life of the country”? The uninitiated reading this in a cab en route to a Wall Street office now owns a mightily skewed portrait of this country.

The good news is that somewhere over the course of the past several days, the Knights of Goldman Sachs—the sturdiest pillar of gloves-off capitalism the world has ever known—have revealed themselves as champions of the poor, as Marxists with a cheque book, as redeemed Scrooges ready with a warm cuppa and a hug. Grock the following: “The poor”, bleats the document, “have benefited from cash and non-cash state transfers”. The fact that Goldman CEO Lloyd Blankfein would personally assassinate any American president who instituted “cash transfers” to America’s poor can go on hold for the meantime, but Nelson Mandela’s South Africa should appreciate both Goldman’s cultural sensitivity in this regard, and their willingness to suspend any and all of the sound neoliberal principles they shoved down our throats in 1994 in order to shill a product. And what product would that be?

Hang on a sec, we’re getting there.

We have yet to stray from page one, and it gets worse. For instance, what the hell does this mean? “Whilst unemployment has remained high with a net 900,000 added to the unemployed in 20 years, those with employment have in fact grown by 4.1 million in the period. Employment has therefore grown, albeit at an insufficient rate to bring the aggregate % unemployed down.” Goldman wants us to believe that while there is no change in the unemployment percentage, there are more actual people working. This is good for the economy, one supposes, because more people are buying more stuff. But it doesn’t mean we’re less poor, does it? I don’t know, because the more I scrutinise the sentence, the more I see a portrait of Kafka.

And it gets worse still. Charts are the bullshit financial report’s version of bare breasts in an HBO show—whenever the narrative flags, boobies! On page 3 we get the cracking “Service delivery has improved since 2002”, which quotes entirely from a daintily sniffed at Stats SA 2012 General Household Survey. And yes, according to Stats SA, service delivery has improved. But service delivery is, of course, the single largest flash point in this country, making us second only to China—whose 1.3 billion inhabitants engage in a riot-sized demonstration every two minutes—in how many protests we merrily conduct per annum. A fact, you’ll be unsurprised to learn, that goes virtually ignored in this report.

The service delivery chart is, however, thoroughly trumped by the moronically titled “The US still dominates the world as we know it today”, reminding Goldman’s readers that no—despite all the really good news we’ve been imbibing for the past 3 pages—South Africa is not the biggest economy in the world. (Who the Christ is this thing meant for? A second grade remedial class?) There are actual circles depicting the US economy and the Chinese economy, and those circles are larger than the South African economy by an order of magnitude. So, yes. Circles!

I could do this all day, but the important thing to understand is that there is nothing—not one piece of information shoveled into a chart or otherwise—that could not have been pulled off Wikipedia by a seeing-eye dog on lunch break. Some of it, however, could not have been pulled off Wikipedia. To wit: “In 1994 South Africa suffered from a ‘bad neighbourhood’ syndrome, particularly highlighted by the political and economic state of Zimbabwe”. Now, with Zimbabwe rivaling Silicon Valley for the sheer number of its Fortune 500 companies, South Africa suffers from “good neighbourhood” syndrome? You can’t make this shit up. Or, more appropriately, you can only make this shit up. So yes, in every respect but one, the Goldman report gets a failing grade. And the one respect in which it passes with flying colours? It’s a supremely canny piece of advertising.

The real question, of course, is whether a report blathering on about how things have improved since 1994 is worth anything to anybody? Of course things have bloody improved: at the very least we’re living in a country that isn’t ruled by white supremacist geriatrics, one that is governed by some of the most glorious and progressive legislation anywhere in the world. But doing before and after comparisons—as if South Africa is the subject of a dietary supplement commercial that pops up on a Facebook news feed—is basically pointless. If once you only ate cake, and now you also eat some veggies, you’re not going to be as fat as you were when you just ate cake. The real issue is whether you’re as fat as the guy next to you.

But I know what’s really troubling you. Why is Goldman Sachs bothering with all the spin? Very simply, Goldman, like many US investment firms, are now in the business of selling emerging markets. They’ve wised up to the fact that the Africa Rising narrative serves their interests, and they will therefore bust their asses crafting nonsense reports in order to “educate” their jittery (but durably credulous) client base, who would rather drink bleach than buy a chunk of Chad, until they’re made to believe that Chad is the country version of a pair of Manolo Blahniks. The real tragedy is that the story of Africa’s rampant growth—of Africa’s once-in-an-epoch transformation—has been hijacked by those who seek to profit from it, and in profiting don’t care if they destroy it. (See: implosion, American financial). Which would matter only slightly less if the very governments who are undercutting that change didn’t use those same reports to burnish their own shoddy reputations.

The ANC, once-upon-a-time communists down to their camouflage Y-fronts, yesterday released the following fawning embarrassment of a press release: “[The Goldman Sachs] report makes an incisive assessment of the successes and challenges that have characterised South African society since the advent of democracy”. What’s next—Zuma becoming head compound-building consultant for JPMorgan Chase? Furthermore, our ruling party calls on South Africans “to engage the substantive content of this independent, scientific critique and as a nation, deliberate on its findings”. Also, “it is on the basis of such balanced and fair assessments that the true success story that is twenty years of democracy in South Africa will be told and, as we move forward, guide and shape our collective vision to create a society that indeed ensures a better life for all”. And now let’s all use the Freedom Charter to roll a fair and collective spliff, while Julius Malema cackles into the fine leather of his bespoke Maybach.

I’m not sure that I have ever read a financial report so willing to engage in numerical gymnastics as this one. We’re being used, folks. We’re being played like party-favour ukuleles. Goldman will make money by betting against their clients betting on South Africa. That’s how they roll. And the guys in Tshwane have the temerity to crow while they’re being fleeced.

The South Africa Goldman Sachs report is a commercial for the emerging market story they are currently selling. And one way or another, we’re going to pay for it. Can’t win with these guys. Impossible. But boy, can you ever lose. DM