Zuma unplugged: How a charm offensive backfired into a diplomatic blunder 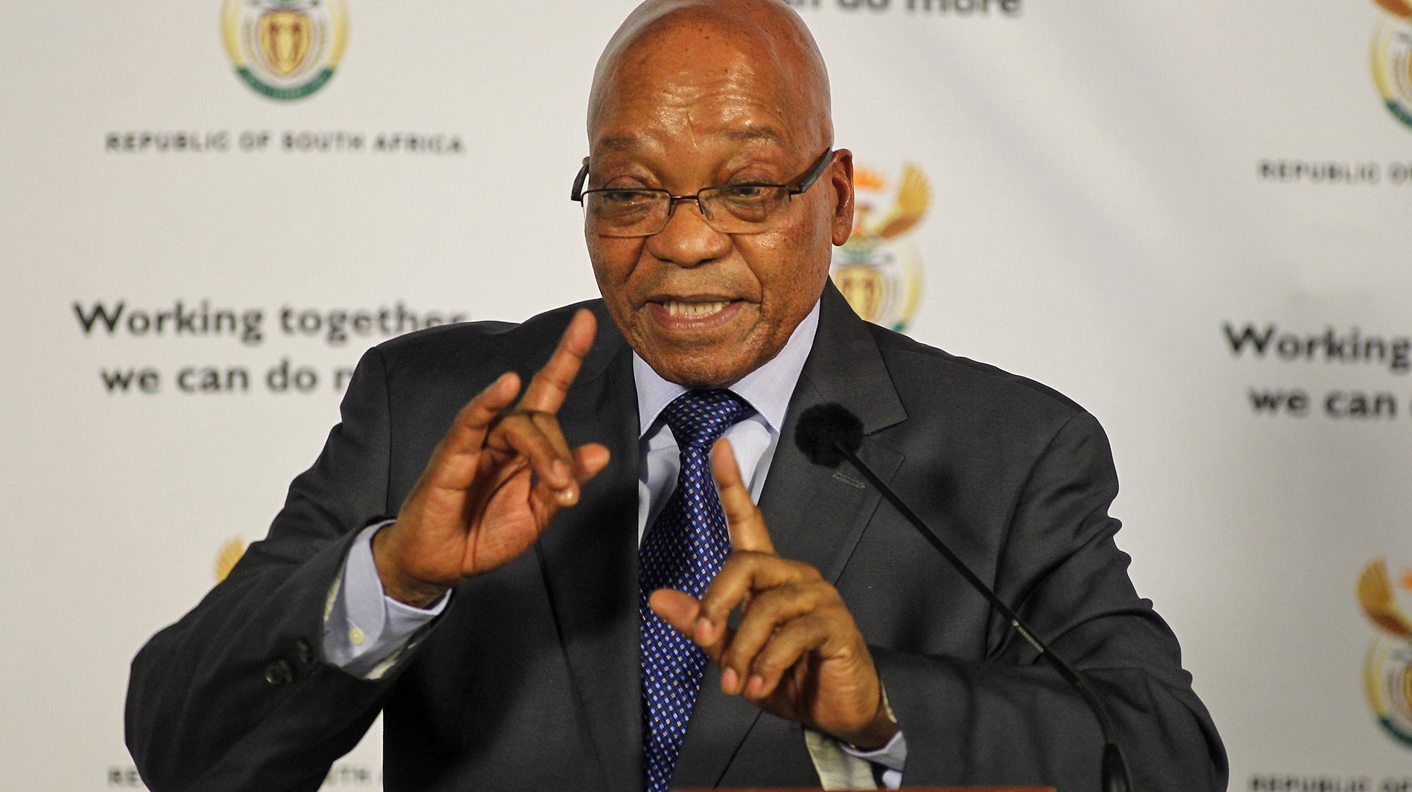 It was going so well. President Jacob Zuma arrived at the University of Witwatersrand on Monday evening for an ANC’s manifesto forum with his game face on. He did not just go through the motions like he sometimes does when he is fatigued. Instead he was chipper and seemed genuinely interested in what people in the audience had to say. But Zuma’s off-hand, curious comments about Africans and Malawi while he was speaking about eTolls have whipped up a storm. It distracts from a rare interaction between the president and a diverse audience on major issues such as requests to change the Constitution and the future of black economic empowerment. By RANJENI MUNUSAMY.

Contrary to reports that President Jacob Zuma’s gaffe on Monday night had embarrassed the ANC, there was much excitement and backslapping afterwards amongst the party’s Gauteng leaders who hosted the event. For them the forum had been a roaring success – they had drawn a full house at the Wits Great Hall, there were no hitches and there was not a single comment from the audience during the meeting that suggested that ANC members there were disillusioned or fed up.

The ANC is holding forums across the country for their members to propose what should be in the party’s 2014 election manifesto. The idea is that this should be a democratic and participatory process where people across society contribute to the manifesto, which will define the next five years in government.

The event at Wits was one of the more high-profile manifesto forums, with the president and Gauteng chairman Paul Mashatile leading the meeting. According to the media invitation, the event was also part of the ANC’s listening campaign, engaging with communities and reporting back on the current term of government.

Considering the varied assortment of people gathered, from professionals and business people to academics and students, there was no predicting how such an event could have turned out. If fact, recent events at the same venue addressed by Cyril Ramaphosa and Trevor Manuel did not go so well, with protests and difficult customers in the crowd rattling them with tricky questions.

And it is not often that the president makes himself available for such an event. A few weeks ago, the ANC in Gauteng scrambled to explain statements made by the provincial secretary David Makhura that they were hoping to rope in leaders such as former president Thabo Mbeki to help them campaign in the province’s well-to-do suburbs. The implication was that Zuma was unpopular amongst the middle-class and would be used in rallies and campaign activities targeting the poor and working class.

So perhaps to prove a point that he had appeal across society, Zuma agreed to address the Gauteng ANC’s manifesto forum at Wits. As we have noted previously, the surest way to make Zuma disengage with an audience he is addressing is to give him a speech to read. And, well, the written speech was not wildly exciting, following the current narrative of all ANC messaging at the moment that South Africa is a better place now than it was 20 years ago. But Zuma was more engaging in his speech than usual, diverting occasionally to emphasise certain points.

And that’s how the trouble started. The issue of eTolling is a monkey on the ANC’s back in Gauteng currently, and there is no way to address a campaign event and not confront it. Making the point that it was not fair to make the whole of South Africa pay for Gauteng’s roads taxing everyone’s petrol, Zuma said the eTolling system was not extraordinary as “this is what the economies of the world do”.

And then the howler: “We can’t think like Africans in Africa. It’s not some national road in Malawi.”

Zuma went on to talk about how Johannesburg was a “serious national city” and could not be compared to other parts of South Africa – naming some less prominent towns and cities. None of this seemed to cause offence amongst those in the audience. During the audience participation session, nobody raised or challenged the president on his remarks, even those who spoke out in opposition to eTolling.

The issues that were raised included a call to change the Constitution to effect greater social change and transform the judiciary. Several people raised shortcomings with black economic empowerment (BEE). There were calls for greater penalties for non-compliance and for companies’ empowerment statuses to be publicised so that ordinary people could decide where to shop or which services to use based on the level of BEE compliance. Business people asked for greater access to BRICS markets and complained about red tape inhibiting SMMEs.

There were concerns raised about the state of local government and funds for employment and enterprise development laying idle because councillors had little knowledge on how these should be used. Someone asked that there should be more feedback from the ANC between elections to share information about the implementation of government programmes.

A student spoke about how eTolling would cripple people like him with small budgets. A representative from Cosatu said expecting Gauteng road users to pay for eTolls was like wanting only sick people to pay for health care and only people with children to contribute towards education.

Zuma took notes feverishly as all these people were speaking, and acknowledged most of what they said when he responded. He was clearly paying attention, not zoning in and out as he is sometimes prone to do. With regard to the request for changes to be made to the Constitution, Zuma said that after 20 years of democracy, it was the right time to hear views as to whether there should be amendments on sections such as the property clauses. He said now that this issue had been raised, the ANC would take it into account and evaluate what amendments should be made.

“The Constitution needs to be a living document. You cannot say the Constitution cannot change… as long as the changes are guided by democratic principles,” Zuma said.

With regard to the student’s complaint on eTolling, Zuma suggested that an exemption for students should be considered. This would work similarly to the exemption for public transport vehicles, he said.

The audience was lapping up everything Zuma was saying, mostly because he had been attentive and answering some of the issues they had raised. Zuma does not always do that – in Parliament and in media conferences, he is adept at dodging and deferring questions. Zuma did not even need to sing to charm that crowd, as he usually does at big gatherings. It was not that type of event; they had come to hear him speak and he read the mood correctly.

While the gathering at Wits was focused on all these issues, Zuma’s comments on Africans and Malawi were exploding on Twitter. They were outrageous statements to be made by an African head of state and undermined the agenda for respect and unity of African nations. They also played up perceptions that other African nations are inferior to South Africa, which is a root cause of xenophobia in this country. These perceptions also cause other African countries to resent South Africa’s bullying and inflated self-image.

Apart from the damage to the country, Zuma also harmed his own image through the silly comments. He holds several positions of responsibility on the continent designated through the African Union and the Southern African Development Community, and he does not need his peers doubting his commitment to the African agenda.

Zuma also damaged what would have been a successful event for him and his party. The media coverage has centred only on his ill-advised comments and there was no attention paid to what ANC members want their party to focus on in the next term of government.

Once again Zuma has shown that he is by far the most divisive figure in politics. He himself spoke on Monday about how people criticise him so freely, and he keeps giving them reason to. Yet he also remains the ANC’s biggest draw card and the face of their election campaign.

So for the next few months, Zuma will continue to dominate the ANC’s campaign trail. Should he remain energetic and involved as he was for the overwhelming part of the Monday evening, he will be the party’s top asset. But should he slip again, his charm will be limited just to those in front of him and ANC’s message to the greater audience will be drowned in the noise that his one-liners can create. Perhaps the ANC campaign strategists now understand a true nature of that famous saying: Damned if you do, damned if you don’t. DM