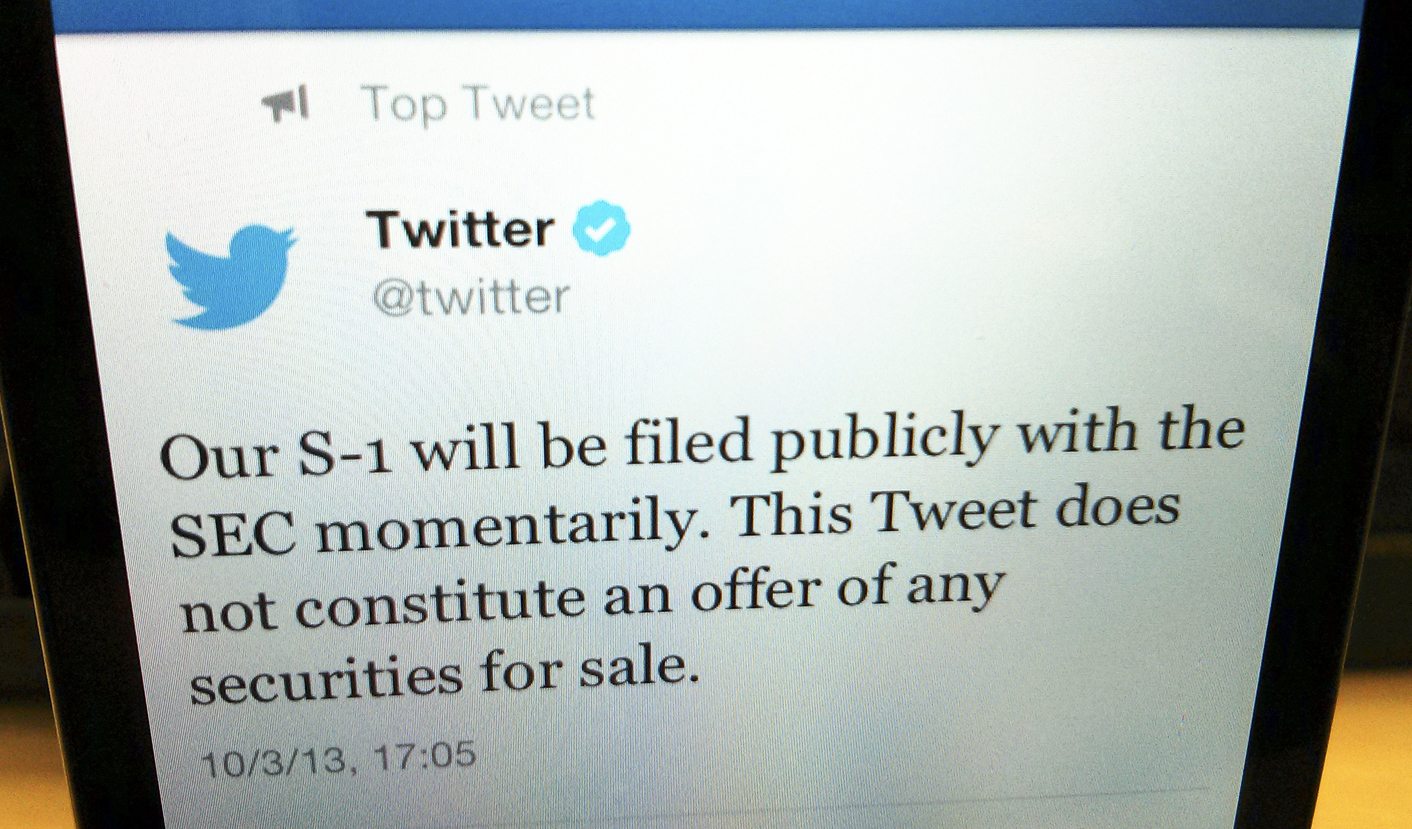 Twitter Inc, racing toward the largest Silicon Valley IPO since Facebook Inc's 2012 coming-out party, hopes to woo investors with rip-roaring revenue growth despite never having made a profit in the past three years. By Gerry Shih.

The eight-year-old microblogging service, the preferred communications tool for celebrities and politicians alike, gave potential investors their first glance at its financials on Thursday when it publicly filed its IPO documents.

Crucially, Twitter managed average revenue per user in the second quarter of 2013 of 64 cents compared to Facebook’s roughly $1.60, according to Reuters’ calculations.

Losses are “a non-issue,” said Brian Wieser, analyst at Pivotal Research Group. “It would have been a surprise if they had a profit. Here’s the number that really matters. It’s the revenue per customer. The question is how much is the typical commitment they’re getting from advertisers at this time.”

In a typical laundry list of risk factors appended to all company IPO filings, Twitter warned it was heavily reliant on advertising revenue. It said more than 87 percent of its revenue came from advertising in the first half of 2013.

Although its user base is expanding steadily, Twitter’s IPO filing showed that the ad prices it has commanded from marketers had been falling for the past five quarters.

“We generate the substantial majority of our revenue from advertising. The loss of advertising revenue could harm our business” the company said in its filing.

The average cost per ad engagement slid 46 percent in the June quarter, compared with the previous quarter. But the company said that decline was the result of a conscious effort to rapidly expand its available inventory, and change its algorithm to distribute ads more frequently throughout each day.

Revenue has risen because this strategy attracted more advertisers, especially small- and medium-sized businesses and international clients, it said.

Twitter’s debut will be the culmination of its journey from side-project to sociocultural phenomenon, today the platform of choice for everyone from the Pope to President Barack Obama.

Its target is to raise $1 billion, a figure devised mainly for registration purposes and that will change as the company embarks on a roadshow to sell its IPO to investors.

Assuming everything goes smoothly, Twitter could begin trading in November.

The company, which spun out of a struggling San Francisco startup in 2006, has grown to approximately 2,000 employees based in 15 offices around the world.

Along the way, the company helped create new ways for advertisers and corporations to reach audiences, from a “promoted tweets” model now replicated by Facebook and other Internet platforms, to its “second screen” approach to encouraging real-time debate around television programs.

Its IPO has drawn multiple comparisons to Facebook, another social media titan. When the world’s largest social network debuted, concerns centered around its inability to fully earn revenue off mobile users.

Twitter appears to have less of an issue with mobile. About 65 percent of its revenue derives from mobile users, it said.

Investors, though, could muster some cheer from Facebook’s revenue and profitability track. The social networking site pulled in $272 million in revenue in 2008 but lost $55 million, according to Facebook’s S-1 document. In 2009, it swung to a profit of $262 million after increasing its revenue nearly three-fold to $777 million. Facebook is now solidly profitable.

Twitter intends to list common stock under the symbol “TWTR,” though it did not specify whether it intended to head for the New York Stock Exchange or the Nasdaq.

Twitter, which went through a period of management turmoil and internal strife in its early years, did not append a letter from the founders to the filing, unlike Internet companies such as Facebook and Google before it.

But in a short message from “@twitter,” the company outlined its mission as giving “everyone the power to create and share ideas and information instantly without barriers. Our business and revenue will always follow that mission in ways that improve-and do not detract from-a free and global conversation.”

Co-founder and former CEO Evan Williams is Twitter’s largest shareholder, with 12 percent of the shares, while co-founder and chairman Jack Dorsey owns 4.9 percent. Biz Williams, another co-founder, does not appear on the list of top shareholders. Current CEO Costolo owns 1.6 percent.

Among institutions, Benchmark and affiliated entities own 6.7 percent of shares, while Rizvi Traverse Management, Spark Capital, Union Square Ventures and DST Global are each shareholders of 5 percent or more.

Suhail Rizvi, the little-known head of Rizvi Traverse who has helped himself and his investors amass stakes in Twitter since 2011, would count among the largest institutional shareholders, according to sources familiar with its investments.

Assuming everything goes smoothly, Twitter’s IPO may re-start a consumer dotcom IPO train that stalled after Facebook’s haphazard debut and subsequent steep share-price decline. But with markets near all-time highs and interest rates expected to stay low for some time, startups like AirBnB and Uber may be encouraged to seek public funding.

Photo: A tweet from Twitter Inc. announcing its IPO filing is shown in this photo illustration in Toronto, October 3, 2013. Twitter Inc will seek to raise $1 billion in the largest Silicon Valley IPO since Facebook Inc’s 2012 coming-out party, according to an IPO filing made public on Thursday. REUTERS/Hyungwon Kang