Marikana injured step up their fight for legal help and... 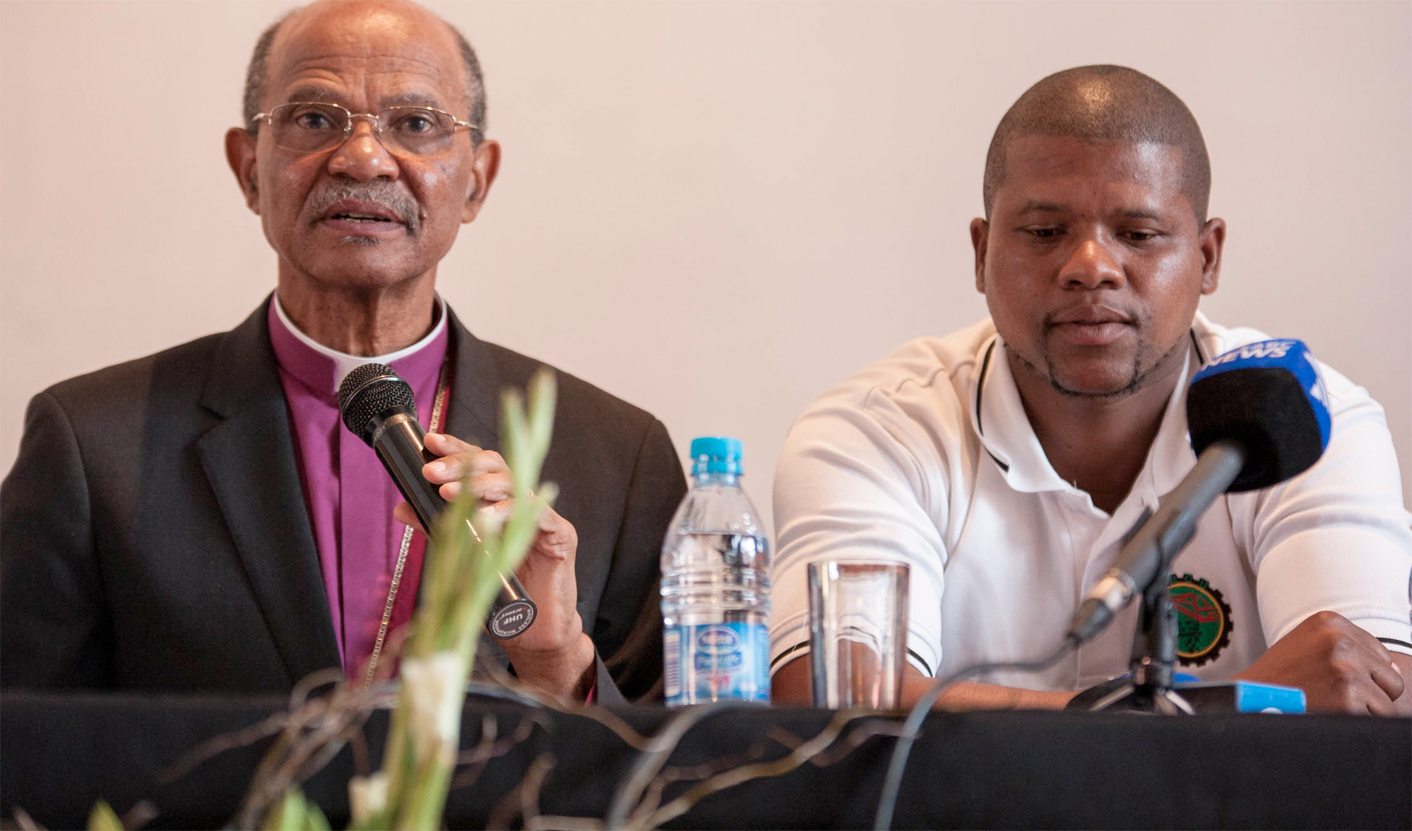 Marikana miners and support groups continued to plead for funding for Dali Mpofu’s legal team on Thursday. They plan to march to the Union Buildings to ask: why can’t the state see the need to fund the victims of the tragedy? By GREG NICOLSON.

“We want to see the government because we want to talk about the legal team that represent us. It doesn’t matter how they are paid but they must be paid by the state,” said injured mineworker Mzoxolo Magidiwana, who is still on crutches, on Thursday.

“Even if they go to the mashonisas or micro lenders the government can do that but we want our lawyers to be paid. We want the truth. We want it known who actually caused all these problems.”

Magidiwana joined the Marikana Support Campaign, Citizens For Marikana, Bishop Jo Seoka and Marikana Women’s Movement to give an update on efforts to secure funding for advocate Dali Mpofu’s legal team representing the 270 injured and arrested mineworkers at the Marikana Commission of Inquiry. The groups plan to march to the Union Buildings on 12 September to urge President Jacob Zuma to provide funding for the miners, as the state has to its legal teams at the commission.

“What has caused us to organise a march on the 12th is the pain that we have. We, the people who experienced the massacre, do not sleep, because when we look at the position of the government we see that it’s killing us alive and watching. When I say the government is killing us alive and watching [I mean] it shouldn’t be paying the lawyers for the police and not the lawyers that represent us because we are the people who produce wealth in the mines. The pain we have – we are treated as nobodies,” said Magidiwana, who was there with other Marikana mineworkers.

During the event, held at the Workers Museum in Johannesburg, speakers emphasised the need to find the truth about what happened at Marikana. That requires legal representation for the injured mineworkers, they stressed.

Bishop Seoka noted three ways to secure funding. The state can agree to pay the legal fees in an out of court settlement. A court appeal for funding is scheduled for 25 and 26 September in Pretoria’s High Court, which comes after the Constitutional Court and High Court have denied applications on the grounds that the judiciary does not have the power to instruct the state to spend the money. Citizens For Marikana is also talking to possible donors and will open the Marikana Dignity Trust for the public to make donations towards the legal fees and the support of the families of the victims.

During the Marikana commemoration event held in August, buckets went through the crowd and collected R17,201.50, one US dollar, and one Lesotho loti. The Mpofu legal team’s fees, however, come to R340,000 a month. That’s still substantially less than the R6-million the state is spending on the police and evidence team.

Injured and arrested mineworkers and their families who want to speak to President Zuma to compel him to provide funding will attend the march to the Union Buildings. Seoka said an application to march has been submitted and has been approved, but is awaiting collection.

Primrose Sonti from the Marikana Women’s Group added, “This is no longer a Marikana issue only, it is for the nation as a whole … We are wondering why the department is not funding the legal representation of the workers, why it is supporting the lawyers or the police, we are asking why. Peace at Marikana – we don’t think it will ever be restored the way it is happening now.”

Mpofu has been accused of using the Marikana Commission to enrich himself and gain attention, but speakers on Thursday defended his team. Teboho Mosikili, who represented the families of the killed miners, was bemused on Thursday when asked whether the lawyers have made sacrifices to represent the injured and arrested mineworkers. Mpofu’s team is significantly cutting down its costs and does not charge for much of the demanding workload, he said. Seoka added that it’s his impression that the costs are not to benefit Mpofu, but to simply cover costs of taking part in the commission.

The Department of Justice maintains that there is no money in the budget to pay the lawyers. It is paying for the commission out of its own budget and can’t now afford Mpofu’s costs, it has argued. Justice minister Jeff Radebe has suggested evidence leaders represent the mineworkers, a proposal that has been widely rejected as unfair.

The miners suggested that if they do not take part, the inquiry should not proceed. Without their input, it’s likely to be one-sided and the final report and recommendations will be perceived to lack legitimacy despite chairman Ian Farlam’s best efforts. If the commission continues without Mpofu’s team and those who have pulled out in solidarity, it would be severely compromised. No one is talking about evidence.

Things have hardly changed since August 2012. We’re still talking about money and the lack of justice for those who have it and those who don’t. DM