A day in the life of a soul-searching country: Will good eventually prevail? 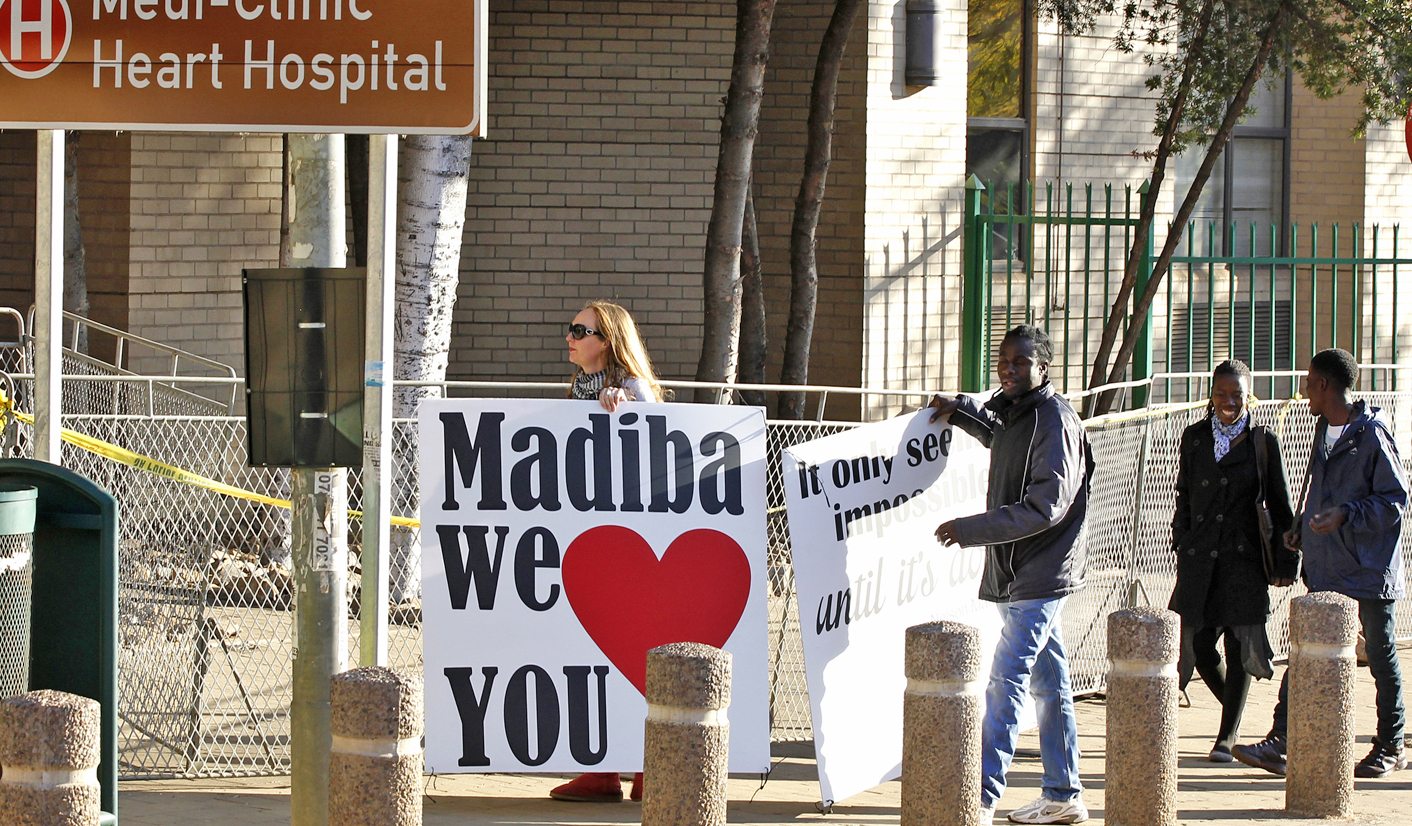 It was a day of secret family meetings, bolstered security outside the hospital, a gust of high-profile visitors and even a strange (but false) whisper about Barack Obama sneaking into South Africa to see Nelson Mandela ahead of his official state visit. But as the anxious winds blew and the rumour monster fed, ALEX ELISEEV found solace in the words of a veteran journalist and author who wrote that Madiba is proof that good can triumph over evil…

Sometimes, in the middle of a hurricane, the golden thread of a story well told can lead you away from the madness and chaos and into a quiet oasis of thought.

Seeing the story in a column published in several newspapers, I decided to call Du Preez and hear the story for myself. I wanted listeners of the radio station I work for (Talk Radio 702) to hear it too. Having read several books by Du Preez and knowing how he can set history on fire with words, I thought it was an appropriate time to hear his voice.

Du Preez explained that while editing the anti-Apartheid newspaper Vrye Weekblad back in 1988, he decided to write to Nelson Mandela, who was at the time serving out the final years of his prison sentence. He knew that Madiba read the newspaper and he hoped the message would reach him. The message was for Mandela to liberate the Afrikaaners and take them along on the journey into a new, democratic South Africa. Du Preez understood that Mandela would be behind the steering wheel as soon as the time was right.

For around two years he didn’t hear back from the future president of South Africa. Then, four or five days after Madiba was released from jail in 1990, Du Preez’s phone rang and, on the other side of the line, he heard an unmistakable voice.

Mandela, he says, invited him to visit him at his home in Soweto. He said he’d come over himself, but his bodyguards wouldn’t let him.

So Du Preez drove there and was met by Madiba in the street, his hands stretched out in greeting. Mandela spoke in Afrikaans and apologised for his Xhosa accent, Du Preez recalls.

Drinking sweet, milky tea, the pair discussed inclusive democracy and what it means. Du Preez made his plea in person. Mandela spoke about this vision for the country and apologised for not writing back from prison, saying the wardens wouldn’t allow it.

Pause there for a moment. Consider that Nelson Mandela had just finished serving almost three decades in jail for his opposition to the monster that was Apartheid. There stood a man who sacrificed everything and paid an unbearable price for his beliefs and the country’s struggle. A man on the cusp of becoming the global icon he is today, a president in waiting, the future “father of the nation”. And yet, there he was, making tea, joking and discussing the smashing of barriers between the races with an Afrikaner.

He was displaying leadership of a supernatural kind.

Through this interaction, much research and several other interviews and meetings that followed over the years, Du Preez reached the following conclusion: “Rather than seeing a hero with feet of clay, it reaffirmed my view of what a special human being he was. He wasn’t a saint sent by some higher being after all; he was an African and a South African of flesh and blood, a product of our history and society.”

Du Preez goes on: “To me, Mandela was living proof that good can prevail over evil, that there actually is something such as a shared humanity.”

I thought about these last words throughout the day. I wondered if some of the current battles – Nkandlagate, for instance, or textbooks and toilets at schools – would eventually end in victory for the people of South Africa. I thought about how long some of these battles have been running and how desperate the situation appears at times. I thought about the wave of corruption, the damage being done to the judicial system, police brutality and all those other evils. Will good eventually prevail?

Du Preez’s words followed me into a media briefing on US President Barack Obama’s visit to South Africa, which begins on Friday. I had read that Obama often summons the quote “the arc of history is long, but it bends towards justice”. In other words, it may take a long time for good to triumph over evil.

Du Preez also said: “Mandela brought integrity and moral authority to government that had not been seen before or since.”

That same morning, I had been speaking on radio shows abroad, explaining how – in my opinion – our current president, Jacob Zuma, had failed to rise to the occasion 24 hours earlier. How he squandered an opportunity to speak to the nation and the world and deliver a message of unity. How he had made jokes at the country’s newest political party (the pronunciation of AgangSA) and defended an education system (and the minister in charge of it) which is clearly in a tailspin.

International Relations Minister, Maite Nkoane-Mashabane, says Obama would have liked to visit Mandela but understands he needs space to recover. I thought about strong world leaders and the effect they have on the countries they lead.

We know how desperate South Africa is for strong leaders who carry “integrity and moral authority”.

In my interviews with foreign media, I kept getting asked whether South Africans have resigned to the fact that Madiba could leave us at any moment. I answered saying we are all soul-searching, trying to understand what he means to us as a country and as individuals. I added that while the reality is setting in, the word “critical” (in relation to his condition) still feels like a punch to the gut.

Much has been written about what Madiba means to us and what his legacy will be. Much is still to be written. I think Du Preez has stumbled onto one of the greatest meanings: that the battles are worth having, because good can prevail over evil. It just takes time.

And now, if you stick your head back into the wind, you’ll see another statement by the Presidency, saying that Mandela’s health has not improved and remains unchanged. You’ll hear Nkoana-Moshabane say that Obama’s visit – and life in South Africa – must go on regardless. You may catch a glimpse of Kenny “the ultimate photo bomb” Kunene at the hospital where Madiba is being treated and scroll through the ANC’s bizarre response to his antics. You may stumble across images of the white doves that were released there. You’ll read about the private meeting that Mandela’s relatives held in Qunu, in the Eastern Cape, and all the speculation about this gathering. You’ll note reports that streets surrounding the hospital were closed off and high-profile visitors ranged from Defence Minister Nosiviwe Mapisa-Nqakula to former Reserve Bank Governor Tito Mboweni. Twitter will be full of rumours that will make your head spin. And perhaps you’ll look over your shoulder for a glimpse of a golden thread, a beautiful story and a place to sit and think. DM

Eliseev is an EWN reporter.

Photo: Well-wishers arrive with banners outside a Pretoria hospital where former President Nelson Mandela is being treated, June 25, 2013. REUTERS/Siphiwe Sibeko