The cargo ship researching the pollution of its own industry 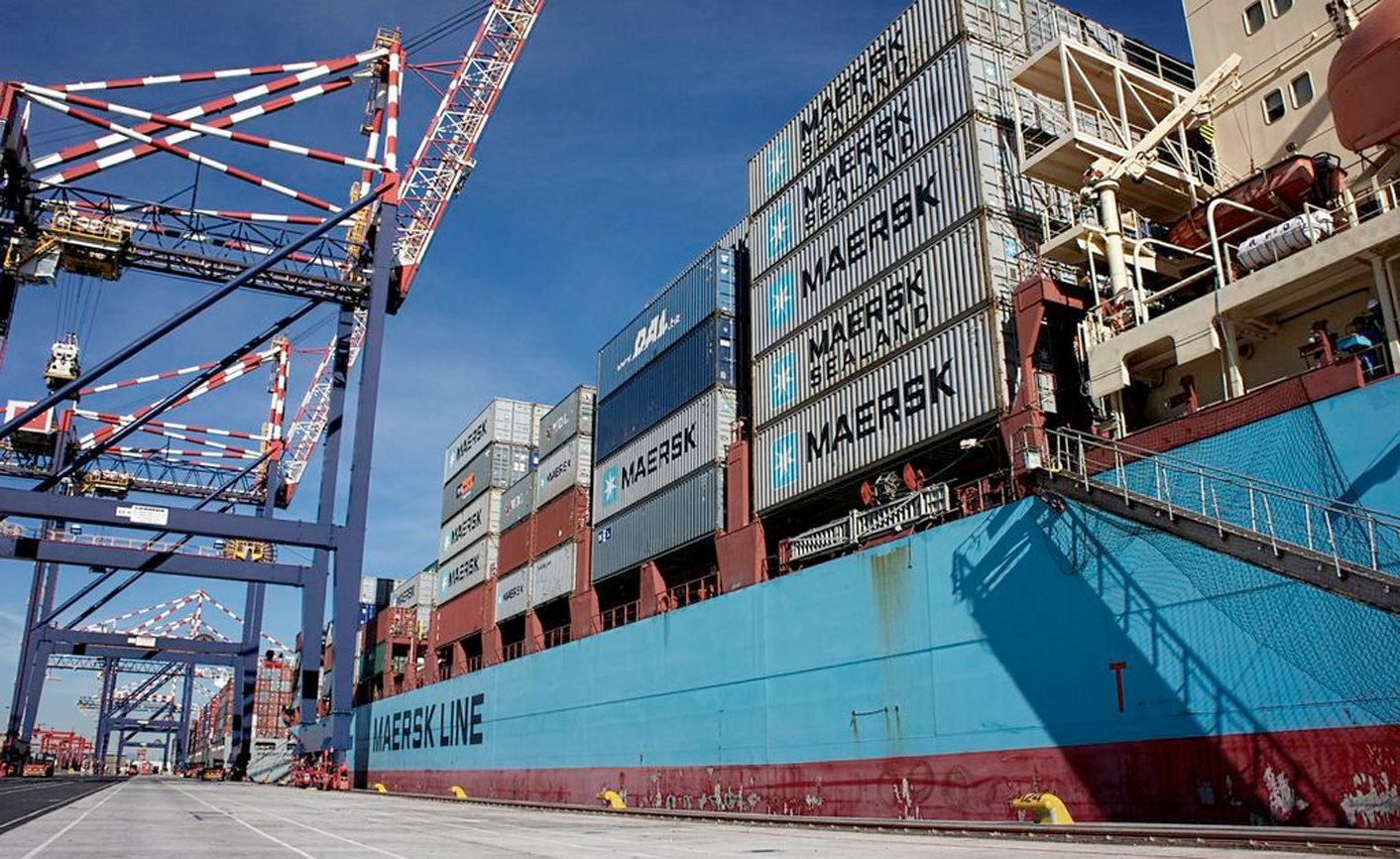 Shipping is one of the fastest growing sources of pollution in the world. But some research units and companies are waking up to the fact that the ships which plough the world’s oceans every day, carrying goods between continents, may also be ideally placed to carry out research into the planet’s changing climate. REBECCA DAVIS had a look at one such ship, Maersk’s Lars Maersk, which docked in Cape Town on Monday.

When you think about the pollution that arises from shipping, oil spills are often the first thing that springs to mind. They receive a lot of media attention because oil dumps have a direct, visible effect, and provide poignant visuals of fish, birds and mammals struggling for life. This in turn usually evokes a great deal of public anger; corporate heads roll; and commitments to increased safety standards are reinforced.

Oil spills can have terrible consequences, but they don’t happen every day. What does happen every day, however, is that the global shipping industry produces what is estimated at between 3 and 5% of carbon dioxide (CO2) emissions. For a long time the global climate change debate ignored the impact of shipping because ships were seen as being intrinsically ‘greener’ than air travel, especially given the rise of cheap flights in the 2000s. In recent years, however, the industry has come round to the need for regulation, and there is now broad consensus within it that emissions from shipping should be cut by between 15 and 20% by 2020.

Maersk Line is the world’s largest container shipping company. Their 600 ships dock in ports around the world about 35 000 times per year. That’s a lot of carbon dioxide. The company says that it has already met the 20% target for emissions reduction, however, and now aims to drop their carbon emissions by 40% per container-kilometre by 2020. How?

“By sailing slower,” explained Captain Christian Hegart, leading a tour of the Lars Maersk vessel in Cape Town on Monday. Over the course of last year, the speed of Maersk vessels was reduced by two knots. Reducing speed on large ships, and thereby reducing fuel costs, is in ship-owners’ interests for obvious financial reasons. However, this also has to be balanced with market competitiveness, which is why the company has joined the call for global regulations to apply to CO2 emissions for shipping. “A global regulatory playing field not only simplifies compliance and enforcement, but also minimizes the risk of evasion and unfair competition,” their 2012 sustainability report states.

It should be noted that not everyone believes that Maersk’s emission reductions truly amount to a big environmental step forward. The World Environment website grumbled that the measures “have the aroma of smoke and mirrors about them”.

“For one thing it assumes the giant ships will be fully loaded on every round-trip sailing, something that rarely happens,” the website noted. (Captain Hegart admitted on Monday that the ships do not always carry a full load.) While it’s easy to demonise the ships which transport the vast majority of the world’s cargo from place to place, however, some of the responsibility must be borne by today’s global consumers (that’s us), who demand increasingly rapid access to international produce.

The Lars Maersk ship docked in Cape Town’s port on Monday after a journey from Las Palmas in Spain. From Cape Town, it travels to Port Elizabeth and Durban before returning to Europe: an eight-week round trip. The ship is big: 226 metres long and 30 metres wide. What sets it apart from the other ships which regularly traverse the world’s oceans, however, is that it is decked out to carry out scientific research into the effects of CO2 emissions on the world’s oceans as it travels.

The Lars Maersk is part of a network of floats and research vessels which carry scientific equipment as part of the CarboChange project, which analyses how much CO2 is absorbed by the ocean, notes changes in the ocean, and uses this data to predict future climate.

“This boat has been recording data since 2005,” said Maersk South Africa MD Jonathan Horn. “We believe that it’s important to understand the impact on the oceans and drive proactive minimising of harm.”

The engine room of the Lars Maersk – which resembles one vast, multi-piped machine – does not only serve to power the ship. Set against one wall is a system set up to carry out various tests on seawater collected during the ship’s journey. When water is pumped to the system, it is measured for carbon dioxide pressure every five seconds, and the temperature and salinity of the sea water are simultaneously recorded. At the same time, a box above the ship measures carbon dioxide content in the atmosphere. All this takes place as soon as the ship moves out of a harbour area.

The project is part-funded by the EU’s CarboChange project, in collaboration with Maersk. It’s important that it be carried out in a long-term manner, because the rule of thumb when it comes to determining trends in oceanography is that you need to be measuring for more than five years, given the number of changing factors which impact on carbon dioxide pressure in sea water. CarboChange has committed to contributing funding until February 2014.

Scientists now say that it is a matter of empirical fact that sea surface temperatures have been higher during the past three decades than at any time since observations began in 1880. However, these measurements haven’t always been reliable. Initial methods of measuring seawater temperature involved dumping a bucket in the ocean and sticking a thermometer in it – but canvas buckets cooled faster than wood buckets, which wasn’t always taken into account.

Previous estimates of carbon emissions from ships were also speculative, however, because they were based primarily on the quantity of fuel bought by ship owners: an unreliable yardstick which led to the under-reporting of the problem. In recent years, attempts have been made to standardise reporting by factoring in more reliable aspects like ship engine sizes, time at sea, and the quality of fuel bought.

A study carried out by scientists at the National Oceanic and Atmospheric Administration in the US in 2009 found that tiny pollution particles in the fumes emitted by ship engines actually serve to cool the air, while the CO2 emitted by the same ship is warming it. Although this sounds like it might be a good thing, there’s another adverse effect to this type of “particulate pollution”: it contributes to the premature deaths of people living along coasts.

Concerns about the health risks from shipping pollution were intensified by a 2009 study by the Danish government’s environmental agency, which suggested that emissions from shipping cost the Danish health service almost £5 billion a year, largely as a result of certain cancers and heart problems.

Given the amount at stake, and the disputes over what constitutes accurate measurements of CO2’s effects on the oceans, initiatives aimed at gathering reliable long-term data from sea-water should clearly be welcomed. A ship like the Lars Maersk, in making its journey from Europe to the southern tip of Africa, covers a substantial swathe of the world’s second-largest ocean – the Atlantic – multiple times per year. As such, it is certainly well-placed to measure changing ocean conditions, even though there might be a certain irony in this taking place aboard a vessel representing a high-polluting industry.

If carbon reduction targets for big ships can’t be met by dint of travelling more slowly, more innovative strategies may have to be undertaken. One intriguing way for shipping companies to reduce fuel usage has the air of a throwback to a bygone era. In 2008, the “Beluga SkySails” sailed its maiden voyage from the German port of Bremerhaven to Venezuela, “pulled by a giant computer-guided 500,000-euro kite tethered to a 15-metre high mast”. The SkySails company aims to fit out 400 ships with this technology by the end of 2013, saying that use of the SkySails kite reduces fuel consumption on ships by 15 – 20% on average. With sails pulling ships, and pirates stalking the high seas, the future could look a little like the 18th century. DM