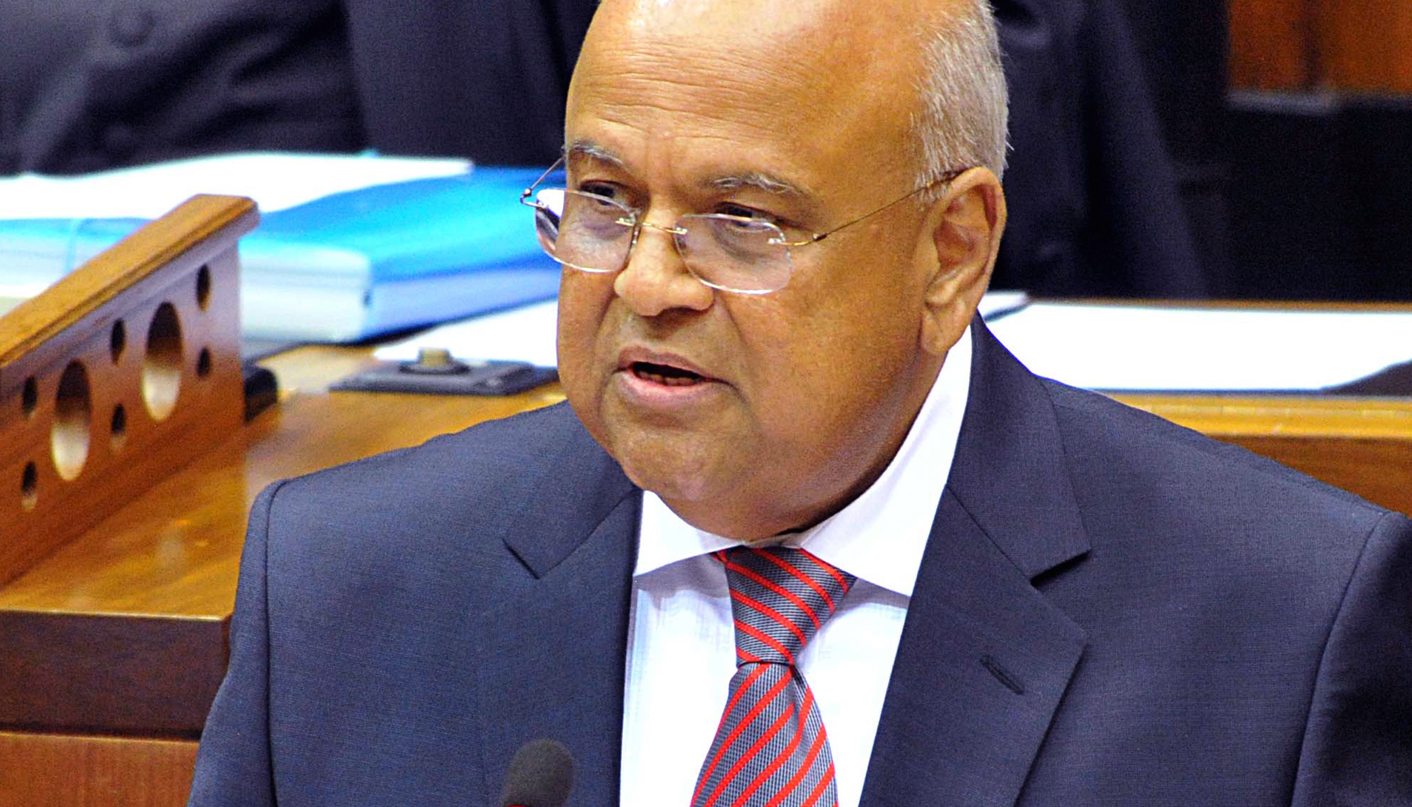 Don’t expect to turn down a Gupta-owned business and get away with it. That was the lesson learned by the Cape Chamber of Commerce in February this year, when it attempted to run a post-Budget breakfast without the involvement of The New Age. (Spoiler alert: the Guptas’ business wins in the end. But you already knew that.) By REBECCA DAVIS.

The old adage that breakfast is the most important meal of the day has clearly been taken to heart by The New Age. In February, news broke that The New Age’s Business Breakfasts – addressed by prominent government figures – were being funded via millions of rands from state-owned enterprises like Transnet and Eskom. The SABC, meanwhile, was reportedly broadcasting the events free for The New Age.

At the time, Transnet chief executive Brian Molefe was quoted as saying sponsorship of such events involving other media outlets was relatively common. But, he said, other newspapers did not benefit from the free coverage on the national broadcaster. “At Business Day when they do it, they get a sponsorship of R800,000 for a breakfast. But they do not get the coverage The New Age gets through its television time,” Molefe said. Indeed.

Despite the ensuing controversy, the breakfasts have continued merrily. Just last week, Water Affairs Minister Edna Molelwa addressed a New Age Business Breakfast in Cape Town. Parastatals have said that the breakfasts are attractive sponsorship options for them, despite their hefty price-tags (reportedly around R1 million), because of their live broadcasts on Morning Live on SABC2. In October 2012 the Sunday Times first reported that the SABC was broadcasting the 45-minute events for free, despite the fact that the broadcaster normally charges R18,000 for 30 seconds’ exposure on the programme. City Press reported in January that a number of inside sources had confirmed to it that the broadcasts were carried out for free.

At the time, SABC spokesperson Kaizer Kganyago confirmed to City Press that there was an understanding between the SABC and The New Age. “The agreement… is a win-win agreement as we get content that helps us inform the public,” he said.

The New Age has consistently maintained that criticism of  its breakfasts is motivated by jealousy from other media outlets who wish they could replicate their business model. But events around a post-Budget breakfast in February suggest that when The New Age’s dominance over government-related breakfast events is threatened, the newspaper may not be shy to throw its muscle around to get its way.

The Cape Chamber of Commerce (CCC) boasts of being “the oldest member-based business organisation in Africa”, with a mandate to “serve, enable and lead business in the Western Cape”. In December last year, CEO Viola Manuel explained to the Daily Maverick, the CCC was approached by Treasury and asked to manage the traditional post-Budget breakfast, held the morning after the finance minister delivers his speech to the nation. “We were incredibly flattered by the opportunity, and we’re a very competent organisation capable of rising to the challenge,” Manuel said.

Shortly afterwards in December, Manuel says, The New Age got wind of the fact that the CCC had been identified to run the event. New Age managing editor Gary Naidoo subsequently made contact, and spoke to CCC officials suggesting an event partnership. His conditions were not acceptable, Manuel says. “They wanted full branding rights and that didn’t make sense to the chamber, as it was a full opportunity for us to get our brand out there.”

The CCC thus turned down The New Age as a partner. Searching for a media partnership, the CCC held conversations with both the SABC and eTV with regards to broadcasting the event. Discussions progressed quicker with the SABC, however, and the decision was made to opt for the state broadcaster as it had been the vehicle for broadcast of the Budget Breakfast before. Arrangements were thus made with the SABC to broadcast the event on Morning Live.

About a week before the event, with all plans in place, the CCC was called up again by The New Age, requesting an urgent meeting. There, its representatives argued that the newspaper should be involved in the event as it had an established memorandum of understanding with the SABC. But the demands with regards to branding remained too onerous, Manuel says, so the CCC turned The New Age down once more. By this stage, in any case, the CCC had already secured a large corporate sponsor of its own for the event.

Manuel said they left the meeting with the feeling that the New Age representatives were ruthless negotiators. “We felt The New Age was definitely putting pressure on the SABC,” Manuel said.

This feeling proved prescient. The day after the meeting with The New Age, Manuel says the CCC was contacted by the SABC: the broadcaster would not be covering the event any longer. Instead, it would cover a New Age event.

“It was too late to contact another broadcaster,” Manuel said. “Our hand had been forced. And we had to ensure that we could still deliver a quality event to our members and the Treasury.” In order to retain the SABC coverage of the event, the CCC had to agree to bring on board The New Age as an event partner. The CCC’s existing event sponsor indicated that it did not want to join the association with The New Age, so the CCC insisted that The New Age compensate the CCC for the loss of the sponsor, which it eventually did.

The event ended up going off well, although some changes to planning were necessitated by the very late allocation of VIP places to The New Age. Manuel says that a “few” CCC members pulled out of the event when they learned of The New Age’s involvement.

Looking back on the events leading up to the breakfast now, Manuel says lessons have been learned.

“It’s not the way we do business,” she said simply. “We have separate operating manuals, so to speak.”

When the Daily Maverick contacted SABC spokesperson Kaizer Kganyago for comment on the matter, Kganyago described the CCC’s version of events as a “misrepresentation”.

“It was pointed out to the Cape Chamber of Commerce that the Budget Breakfast was already part of the schedule for the SABC/TNA breakfast,” Kganyago said. “An offer was made to the CCC to share the platform. Initially the CCC declined the offer and requested that they have a separate broadcast. They later accepted. Nobody pressured the CCC into partaking in the broadcast. They were free to decline.”

He added: “As to any pressure being asserted on the SABC, that is absurd since the SABC and TNA have a contractual agreement.”

The CCC begs to differ. Chief operating officer Bronwen Kausch said: “We knew about the memorandum of understanding [between the SABC and The New Age], but we were adamant that we were not partnering with The New Age. [With that stated] we went back to SABC and offered them the chance to cover the event. After much debate, their news department accepted.”

She says that naturally the event wanted to secure the widest possible national coverage for Minister Gordhan, hence the CCC’s eventual acceptance. “The net result is that we took the pragmatic approach.”

Kausch says that the CCC never disputed that The New Age and the SABC have a contractual agreement. “We merely noted that the SABC news team had assured us they wanted to cover the minister’s speech at our event – we can only surmise, and hope, that this was based on newsworthiness. They then made the decision to cover an alternative The New Age event, which would not have had the minister in attendance, had we not decided to partner with The New Age.”

Ultimately, Kausch takes a sanguine approach. “However unpleasant the experience, we moved ahead, ensured we delivered an event that covered some very important information and met the expectations of both our members and Treasury,” she said.

The Daily Maverick asked The New Age CEO Nazeem Howa whether the CCC’s version of events was factually accurate. He neither confirmed nor denied this. “From The New Age’s perspective, the joint business briefing went well and we are hoping to host similar events with the Cape Chamber of Commerce in future,” Howa told the Daily Maverick via email. “It would be a strange situation if the leadership of a business organisation as prominent as the Cape Chamber of Commerce would be susceptible to bullying as you claim.”

Howa included in his email some back-and-forth email correspondence between The New Age and the CCC “to illustrate the amicable nature of the relationship running up to the event”.

The emails hardly amount to the exoneration Howa suggests, however. They cover the period after the CCC had agreed to take on The New Age as a partner for the event in order to avoid losing SABC coverage. The emails are primarily concerned with the CCC’s insistence that The New Age should cover the costs incurred if  its event sponsor should pull out as a result of The New Age’s arrival on the scene (as indeed transpired). This is only fair, one email records, as the CCC has “done all the event management and stakeholder engagement. At this point there is very little for The New Age to do and therefore you will have very little material contribution.”

Howa also implied that the Daily Maverick was behaving unethically in covering this story.

“We find it interesting that this matter has only come to light now, three months after the event,” he wrote. “It brings into question the motives of your source as well as that of Daily Maverick for taking up an issue so long after the event. The Press Code requires publications to be contemporaneous in their coverage of events.”

(This story, of course, does not cover an event, but a series of actions that took place in its preparation, a subtlety that may have been lost on Mr Howa. In any case, if TNA’s CEO were right, we would all have to stop reporting on the Arms Deal, Spy Tapes and many other stories. – Ed)

It would seem that the CCC would have little motivation for misrepresenting the events leading up to the breakfast, unlike the SABC and The New Age. If so, a number of troubling questions are raised by the story. What exactly is in the memorandum of understanding between the state broadcaster and The New Age, and who is pulling whose strings? Does The New Age own EVERY morning live breakfast event in South Africa that is to be broadcast on the SABC?

The New Age is owned by a family who are unafraid to leverage their wealth and political connections to get their way. Does their newspaper operate according to the same memo? What do you think? DM