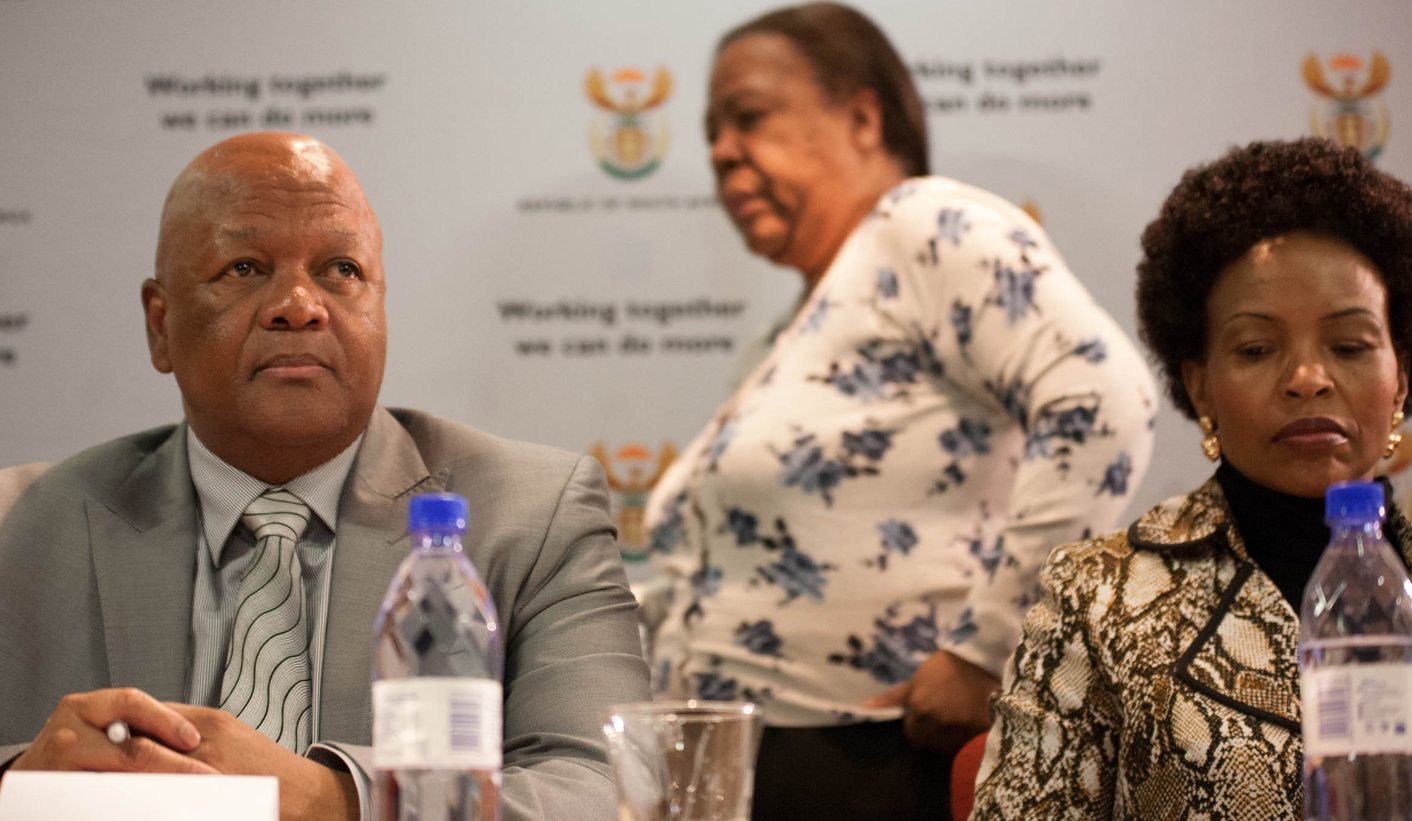 Early in May, the Justice, Crime Prevention and Security Cluster promised an investigation into the scandal around the Gupta wedding guests arriving in a private plane at Waterkloof Air Force Base. The cluster delivered in time and indicated that prosecutions would result. According to the justice minister, there’s a problem with “name-dropping”, a rogue worker at the Indian High Commission and middle-level government officials. The Guptas, president, and ministers, however, seem to have been cleared of wrongdoing. Anyone surprised? Anyone? By GREG NICOLSON.

Reading from an autocue, Justice Minister Jeff Radebe listed a number of laws that were broken and cases referred to police. They related mainly to the security detail that accompanied guests to Sun City for the Gupta wedding. The state deployed 194 people and 88 vehicles “in the interest of the safety of all road users” to escort the wedding party to Sun City.

“However, due to the lack of vigilance of the SAPS members deployed for escort duty, who did not identify the drivers [of hired cars] as non-SAPS members, they placed the reliance on those drivers. This made it possible for the cars fitted with illegal blue lights to push people off the road, cause delays and inconvenience other road users,” Radebe told media. The convoy of vehicles included three cars with false registrations and moonlighting Metro Police carrying firearms outside of their jurisdiction.

Radebe was reporting back on the investigation conducted by a team of directors-general into the landing of Flight JAI 9900 carrying guests to the wedding of Vega Gupta and Aakash Jahajgarhia.

Crimes reported to the SAPS include inducing the police to perform acts in conflict with their duty, pretending to be a police officer, use of false registration, breaches of the Firearms Control Act, and conducting security services against the regulating act. Radebe, who was the main speaker at the press conference attended by International Affairs and Cooperation Minister Maite Nkoana-Mashabane, Finance Minister Pravin Gordhan, Home Affairs Minister Naledi Pandor, Police Minister Nathi Mthethwa and State Security Minister Siyabonga Cwele, wouldn’t say whether the Gupta family is being investigated for any criminal offences.

The justice minister mentioned transgressions of the Companies Act related to providing misleading information for fraudulent purposes and common law crimes relating to “fraud, falsely pretending or misrepresenting the existence of a company” but none of the listed cases referred to the police include those crimes. Sunday’s briefing suggests officials, security members and police involved in escorting the Gupta guests will be charged for relatively minor discretions, while those paying them may get off the hook.

Radebe provided no details of who was responsible, however, telling journalists to wait for the release of the investigation this week. The question remains: What motive did those who undermined the rule of government and the law have for their actions? He said neither the executive nor the relevant ministers were found to have been involved in approving the Waterkloof landing or the subsequent improper security detail.

The landing of the flight at Waterkloof “could have caused severe reputational damage to the state itself”, said Radebe. “The activities of some of the persons involved were driven by the undesirable practice of the exercise of undue influence, and abuse of higher office,” he added, essentially admitting that the Guptas are capable of getting officials to circumvent the law.

“It posed a threat to the culture of professionalism that ought to characterise a caring and professional public service rooted in the Batho Pele principle. It undermines the quest to build a capable state and the requirement that it be served by professional public servants with foresight to understand the implications of their conduct for the reputation of the state.”

Radebe fingered Department of International Relations chief of state protocol Vusi Koloane, suspended for his role in the matter, and the officer commanding movement control at Waterkloof, Lieutenant C. Anderson, for working with the Indian official. He said they were working as “various persons who shared a common purpose” but he didn’t describe what that purpose was. No motive has been given for why the middle-ranking officials would go against protocol to benefit the Guptas.

Responding on Sunday, the South African National Defence Union’s Pikkie Greef said the report defended the Gupta family while the names of others, including union members’ names, were “brazenly thrown about”.

Ministers said the details of the allegations would be provided in the report. But according to Radebe, the whole issue might be as simple as name-dropping. The investigation recommends government launch a campaign against name-dropping and include name-dropping as an act of gross misconduct for government employees. He didn’t elaborate but said someone trying to subvert proper protocol had mentioned the names of the president, defence minister and transport minister to achieve their goals.

One of the more bizarre comments included in the press release on the investigation was that the Waterkloof Air Force Base is not a national key point and instead has more stringent security measures under other legislation.

The press conference was another show of force from the government, with multiple ministers present, including some not in the investigating cluster, such as Naledi Pandor and Pravin Gordhan. But more questions were raised than answered as it remains unclear why these officials decided to circumvent protocol, whether the Guptas will face any censure for undermining the state, and how the ministers and the president can escape accountability for the scandal when it is obvious that the ANC’s relationship with the Gupta family allowed the plane to land at Waterkloof – whether ministers gave direct orders or officials believed that they had the government in their pocket. DM