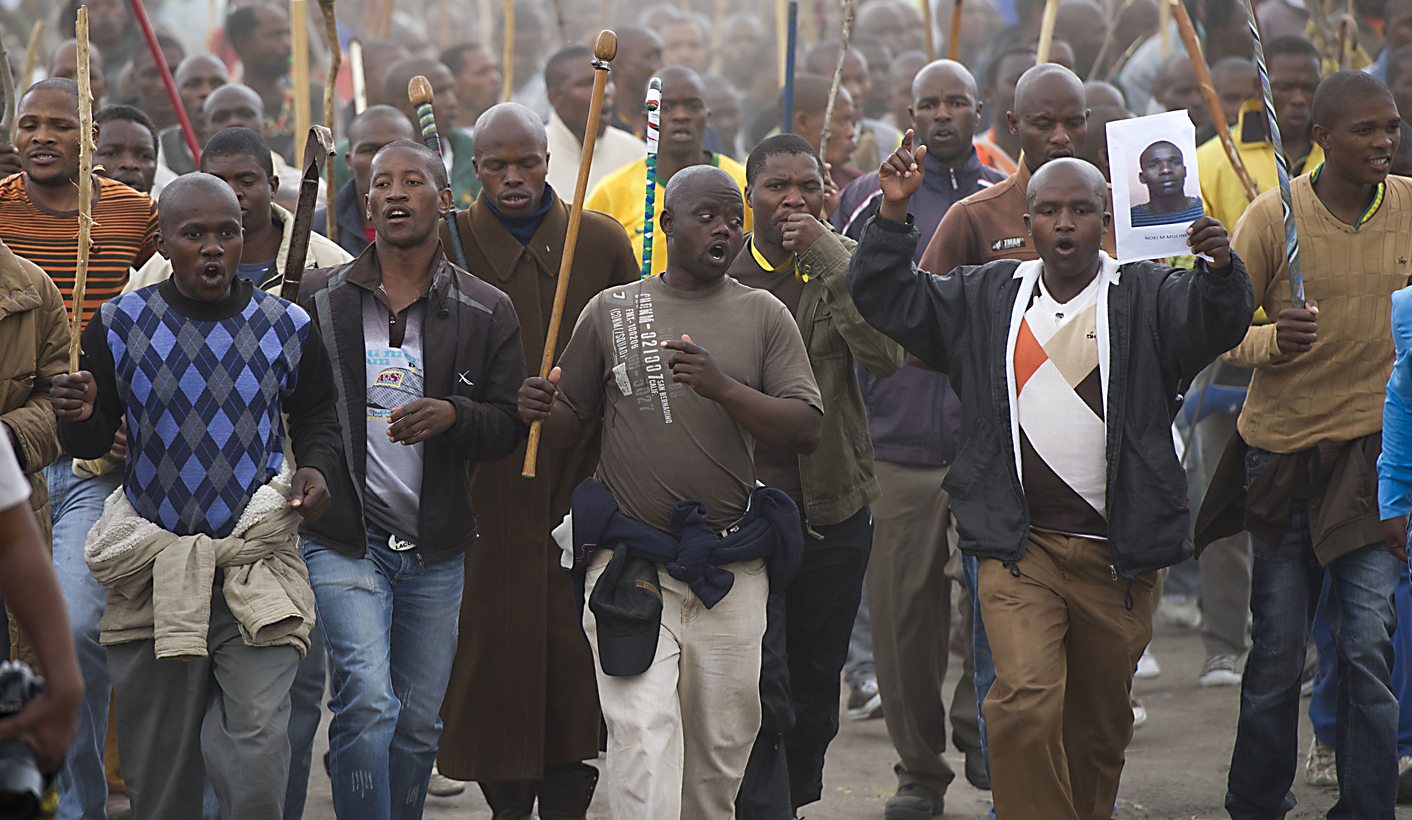 The NUM has lost thousands of its members, mining bosses are under the profit cosh and the mining minster is under the job loss whip. However, it is Joseph Mathunjwa, the leader of AMCU, a union that has had only one leadership conference in its 12 year existence, who is the focal point of this year’s wage negotiating season. And he is the guy who has to deliver – despite AMCU’s non-existent track record. By STEPHEN GROOTES.

In case you’ve been living under a rock for the last little while (where exactly have you been, Stephen? – Ed), you may have noticed that it’s nearly time for our entire mining industry to come for a halt for a little while. Not because the earth has literally shifted and thus shafted the miners. But because it’s negotiating season.

And with the Marikana shootings behind us, the pressure is building on the volcano that is our industrial relations. The caldera (that’s a very technical term… were you writing for Vulcanology? – Ed) of course is in our mining industry. And there’s plenty of steam already being ventilated (Boilers Monthly? – Ed). But, rather counter-intuitively, the focal point of that pressure is not the National Union of Mineworkers (NUM), or even management. It’s actually on the Association of Mining and Construction Union (AMCU). And in the eye of the probable future storm is AMCU’s leader, Joseph Mathunjwa himself.

In some countries, having talks about wages means people sit around a table, have a nice controlled discussion, with the caffeine of their choice, and perhaps, if they’re feeling particularly rowdy, maybe point a finger or two during the high point of the discussion.

But that’s not how we do things here in South Africa. We like to take out the machetes and kill people. It’s more a war than a discussion.

So when you go into these situations, it helps to have a few things.

Body armour, while helpful, is not the main defensive weapon of choice. Instead what you need is legitimacy. You need a proven track record. You need a way of ensuring that when things go wrong, and they will, your people will have the patience to stay the course.

And for that work, you need to have done things well for them in the past. You need to be able to say, “Look, hold on, I know you’re frustrated, but we’ve been here before, and look what I was able to do for you.”
AMCU does not have this track record. And that’s not all it doesn’t have.

It has no structures, no tradition of holding elections. It’s had one leadership conference. And that was in February. After public attention started to focus on the union. Remember its history: it’s a splinter from the NUM in the first place. And the roots of its formation lie in a massive fight between Joseph Mathunjwa and Gwede Mantashe. (Who else, right?) And while it’s been around in one form or another since the late 1990s, AMCU’s been a union for 12 years. And that means Mathunjwa can’t turn around and say he’s the product of a properly legitimate process, with a long history.  He was simply able to make sure he was appointed in one gathering. No doubt chaired by that like-minded individual who started the whole thing. (That would be the chap he sees in the mirror every morning.)

As independent labour analyst Gavin Brown puts it, “Where is the mandate?” You can say what you like about democracy, and its limitations. And you can also suggest the NUM and the ANC etc have had conferences where the outcome was arranged long in advance. But at least there’s a history, there are mechanisms and appeals, and even disciplinary procedures that can take so much time.

Brown reckons AMCU’s real problem is going to be “controlling the stuff at ground level. That’s really where things go pop”. And that’s the point. What you really have with AMCU, is a man standing in front of a group of other men, with a history of violence, and making a promise.

Look, that’s fun, heady stuff for a while. You get to strut your stuff, get on TV and generally act like a strip-club king. You know, the cars, the girls, the cash. But, as one J Sello Malema might tell you: It ends, not so much with expropriation without compensation, or even Sepedi developing a word for “hermaphrodite”, but with SARS.

The problem, as it always is for those who aspire to power is that, eventually, you have to deliver.
And that’s just going to be impossible this year. Because the mining companies have already pointed out that they are losing money. For them, this is life or death, almost as much as it is for Mathunjwa. So they won’t give in; they can’t. Any CEO who does cave, will be sacked the next day, as the share price starts to plumb the deep depths.

Mining CEOs are said to be under pressure at the moment. And sure, they are. But they at least have safe homes to go to, and know that they’re going to survive the next 24 hours. Mathunjwa doesn’t have that luxury. He’s the guy standing exactly at the focal point of the different vectors here. And he is the guy who simply has to deliver.

The NUM can control its members. It can arrange to have a certain number of people at a certain spot for a certain amount of time. It can also tell them to disperse, and they will. The CEOs can just lock up the premises, and leave for a while. Mathunjwa… uhm, can’t. You don’t believe me? Remember Marikana? He got down on his knees and begged the miners to stop. He begged them to disperse. We all remember how that ended.

And no one’s going to help him. Because he’s partly to blame for creating this mess in the first place. While there are all sorts of social dynamics that fermented the violence in the run-up to the Marikana shootings, the fact is, he did more than most (apart from perhaps, Verwoerd) to create that situation.

So he’s going to resort to theatre. As Brown puts it, “the real question here, is how do you ventilate all the steam on the shop floor without Armageddon?” He suggests Mathunjwa may use a bit of theatre. They’ll be tough talking, promises that are made, carefully, and then the back-tracking at the last minute.

Because the real advantage the mines actually have is that they’re already retrenching. And that means they can simply say, “Sure, we’ll give you that double-digit increase, but we’re going to retrench another 20,000 people to make it happen.” And that will really agitate the NUM. And it will also push government to take the side, even if it doesn’t really want to, of the filthy capitalists. Because Mineral Resources Minister Susan Shabangu doesn’t want to have her political rivals pointing at her and wondering aloud how many jobs she lost on her beat. So government will bring all the pressure it has to bear on AMCU and its leadership. You know, the SARS audit, the corruption charges, the whole bit. And if you haven’t had proper leadership elections, the chances are your accountancy isn’t quite up to King III standards.

And so gentle reader, if you are inclined to kind thoughts, perhaps the person you need to spare one for, is Joseph Mathunjwa. He’s going to need it. DM

Grootes is an Eyewitness News Reporter, and host of the Midday Report.