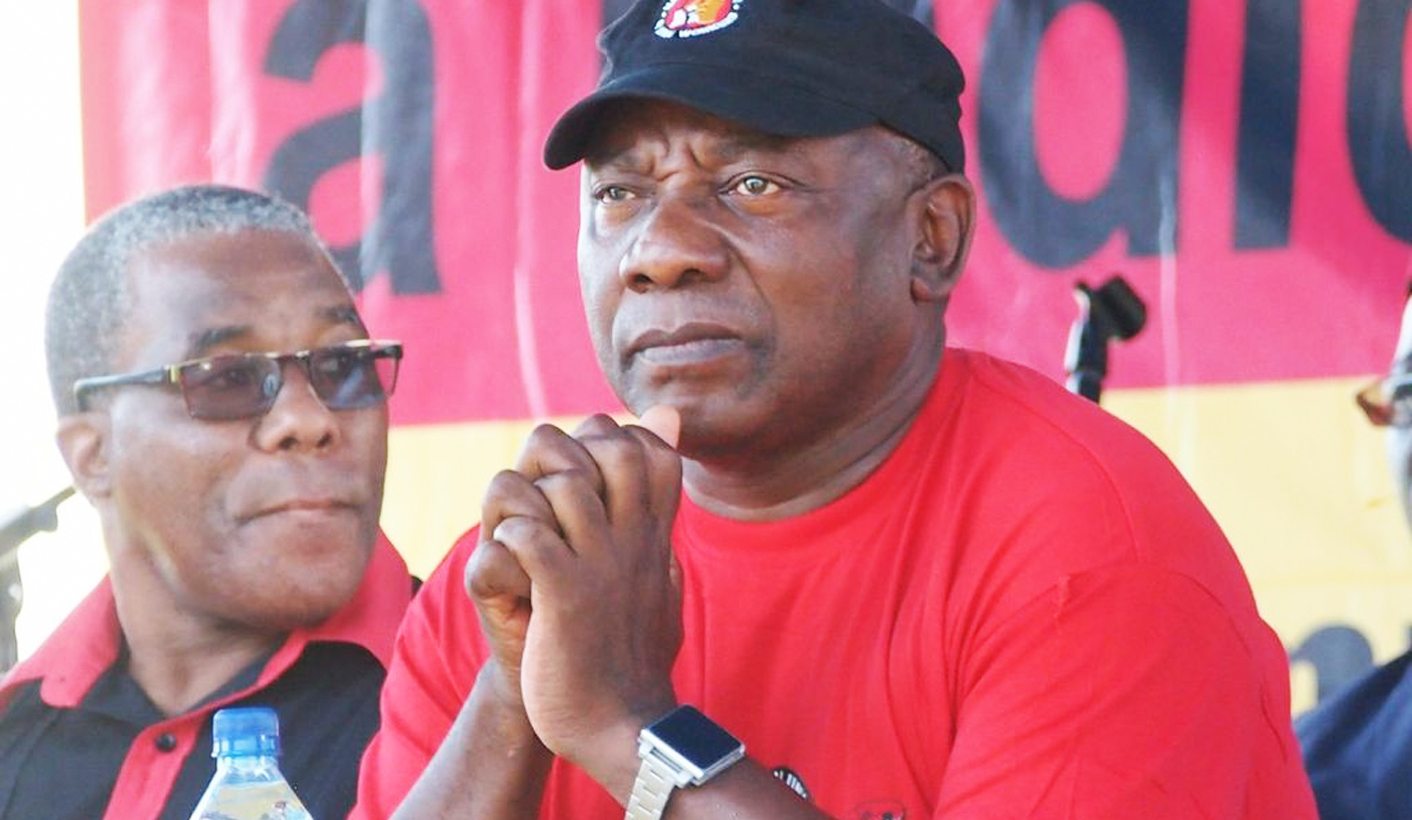 In a significant escalation, mineworkers in the Marikana area are blaming the NUM for the murder of an AMCU member who was due to appear at the Farlam Commission of Inquiry into last year’s massacre. Under pressure to protect its members and fight to retain its position as mining’s leading union, it appears the NUM is becoming more militant. By GREG NICOLSON.

A key Marikana Commission witness was murdered this weekend. The regional organiser for the Association of Mineworkers and Construction Union (AMCU) was shot multiple times at a tavern near Rustenburg. His comrades blame the National Union of Mineworkers (NUM) for the killing.

The murder is one of many killings in the last year related to the ongoing turf battle between rival mining unions, putting South Africa’s biggest union on the defensive and forcing a “hands off NUM” campaign.

It follows recent comments suggesting the union could take a more militant approach in its defence. Speaking in Rustenburg on May Day, ANC deputy president Cyril Ramaphosa declared war on those against the tripartite alliance and in particular, those threatening the NUM where it is most vulnerable, in the Rustenburg area. “We should declare Rustenburg alliance territory. The same attack is being launched onto the ANC, Cosatu and SACP,” said the NUM founder. “We must stand firm and united and defend this union,” he told the crowd at Olympia Stadium. “We must declare Rustenburg alliance territory because this is the home of the ANC.”

A weak NUM means a weaker ANC, Ramaphosa explained. His slogan for the day was clear: one industry, one union, one federation, one country, one party.

The ANC deputy president didn’t elaborate on the NUM’s enemies, but it’s not hard to guess who he was referring to. The union was severely compromised by the industry-wide strikes in 2012. At its founding congress, when Ramaphosa was the union’s only full-time employee, it had just 14,000 members. Within four years membership grew to 344,000 and the NUM remained South Africa’s biggest trade union, with more than 320,000 members in May 2012. But during last year, the union’s 30th anniversary, internal problems became apparent and were exploited by external challengers.

The secretariat report to the 2012 NUM congress detailed the problems in Rustenburg, a crucial region for NUM. It cited unending leadership tensions, unprovoked violence, internal divisions, unpredictable membership, competing unions threatening its dominance, and “the inability of NUM members to defend the union”. An overarching concern behind those issues remains members vying for leadership positions to enrich themselves and the perception that union leaders are in bed with management.

The NUM is estimated to have lost tens of thousands of members, anywhere between 30,000 and 80,000. While its members felt neglected, even betrayed, AMCU was on a membership drive at key crisis points, offering an alternative to the NUM’s vices. The result was a turf war – protracted strikes not endorsed by the NUM that were accompanied by violence, with previously safe NUM representatives being threatened and killed.

The NUM blamed AMCU for the violence and alliance members have continued the attack as the mining sector moves into strike season. NUM president Senzeni Zokwana blamed the media on Sunday for calling Amcu a militant union instead of a violent one. SACP secretary general Blade Nzimande on Sunday said, “There’s a difference between a trade union and vigilantes. AMCU is not a trade union and never has been.”

The comments come ahead of more possible clashes in the mining industry. The rival unions narrowly avoided more deaths in February when Amcu members surrounded a NUM office at Anglo American Platinum’s Siphumelele mine in Rustenburg. Amplats had announced AMCU had taken majority membership, which needed to be audited, and its members decided the NUM had to go. Thirteen people were wounded in the clash as mine security attempted to disperse the crowd.

Amplats announced on Friday it would retrench 6,000 employees, revised from 14,000, and both unions have responded with anger. A resulting protest or strike could lead to battles between supporters of the rival unions. The NUM is still under extreme pressure to retain members and faces another year of challenges as this year’s wage negotiations in the mining sector are due to begin against a backdrop of high demands and violent protests in 2012.

The NUM might be thinking it’s time for a more militant approach. The union launched its Youth Forum last week with a conference in Boksburg. Spokesman Lesiba Sheshoka said the youth wing, for members aged up to 35, was formed in response to a University of Witswatersrand study showing 54% of NUM members are aged 19-39 and young members, less loyal and more militant in their demands, require special attention.

Curiously, the NUM Youth Forum is not a new initiative, with the 2012 NUM secretariat report stating that it was launched in 2011 with interim leaders appointed until a youth summit could be held. Goals included advocacy on youth issues, health awareness, improving access to education and training, and recruiting new members.

The NUM Youth Forum was recast at its launch last week, adopting the language of battle. The theme was “Youth rising in defence and advancement of NUM” with the slogan, “Relax mchana, the NUM is here to stay”.

“The bulk of members we lost are young people and we have realised that they require special attention,” Sheshoka told the Sowetan newspaper. But news agency Reuters summed up its view on the NUM Youth Forum’s role in the ongoing battle simply: “The move signals NUM is preparing to literally fight back against AMCU, seeking younger men to beef up its ranks, after the rivalry between the two triggered violence last year that killed over 50 people and sparked a wave of wildcat strikes that hammered production.”

Put simply, NUM and AMCU members are being killed and it’s likely we will see more deaths as the fallout from last year’s violence, including the Marikana Commission, continues. This year could hold a new set of strikes and a new level of violence. As attacks continue on both the organisation and its members, beware of a new rise in militancy from the NUM as leaders continue to provoke and members attempt to defend their union and their livelihoods. Neither the union nor the ANC can afford to sacrifice the NUM’s dominance as the bloody turf war continues. DM

Photo: At the May Day rally in Rustenburg, ANC deputy president Cyril Ramaphosa declared war on those against the tripartite alliance and in particular, those threatening the NUM where it is most vulnerable, in the Rustenburg area. (Thapelo Lekgowa)