Raymond Buys: 15 years old, dead for not being manly 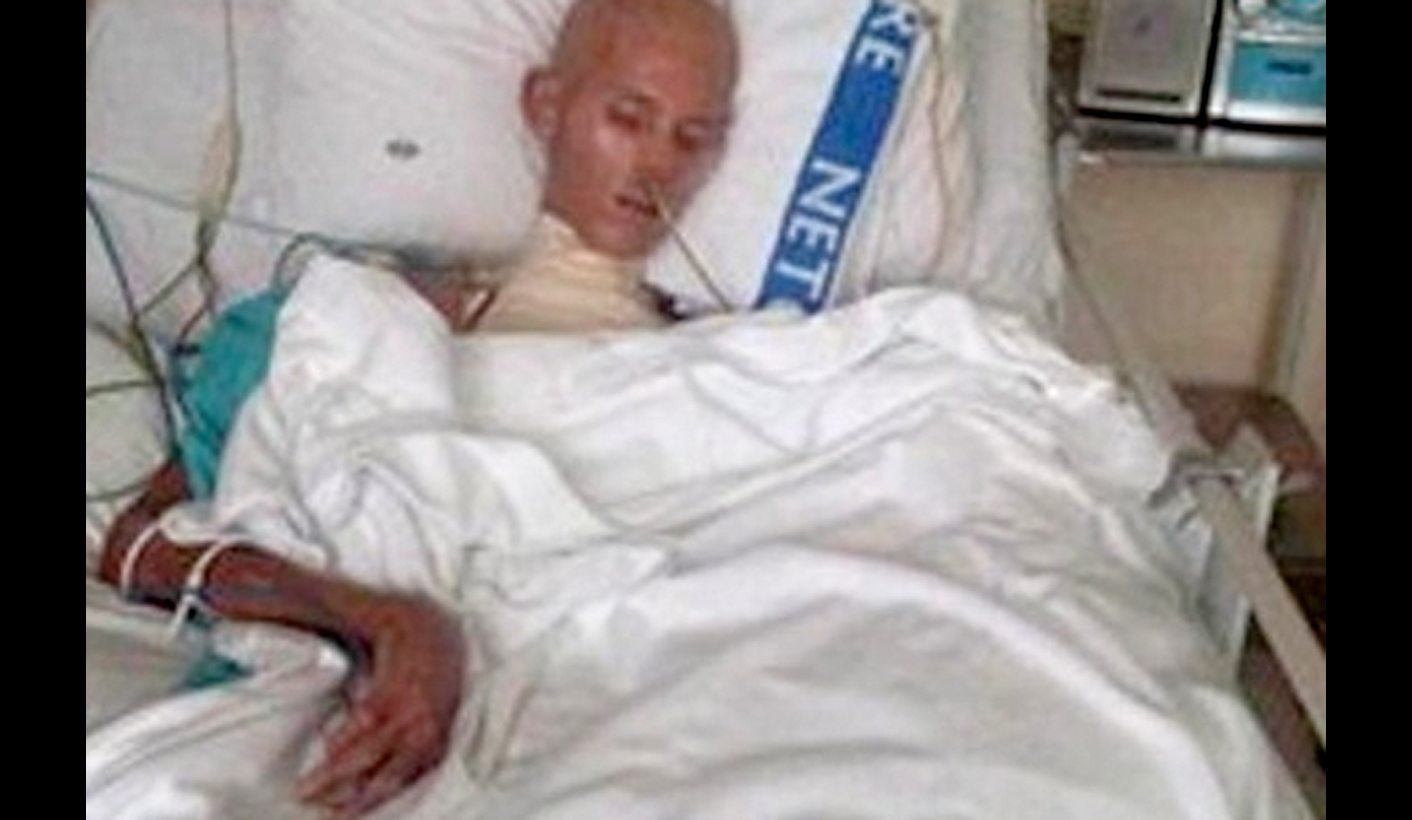 A truly shocking story is currently unfolding in the Vereeniging District Court. The owner of a “game-ranger training camp” with links to far-right groups stands trial for the torture and murder of a 15-year-old boy in his care in 2011. This is the third teen to have died at the camp in the last six years, although the previous two deaths were recorded as “natural causes”. Echo Wild Game Rangers promised to turn effeminate boys into manly men. By REBECCA DAVIS.

A picture taken of 15-year-old Raymond Buys shortly before his death in a Vereeniging hospital in April 2011 shows a skeletal, emaciated figure fighting for his life. Buys lay in intensive care for four weeks before he died. The teen’s parents had signed Buys up for the three-month Echo Wild Game Rangers training course in perfect health. When he was admitted to hospital 10 weeks later, he was semi-conscious and convulsing, with his arm broken in two places. There were burns and wounds all over his body. Buys was severely malnourished and dehydrated, and a medical report predicted that his chances of recovery were “virtually zero”.

Four years earlier, Eric Calitz, 18, and Nicolaas van der Walt, 19, had both died after being enrolled at the Echo Wild Game Rangers camp, held on a farm near Vereeniging. Calitz’s family were initially informed of his death via SMS, and told that their son had died of a heart attack. Subsequently, the cause of death was changed to a seizure, and later, to dehydration. It was eventually revealed that Calitz had died from bleeding on the brain. Van der Walt, meanwhile, appeared to have been choked with a seatbelt, although his death was chalked up to a heart attack.

Echo Wild Game Rangers is a business set up by Alex de Koker, 49, on his farm. Parents pay R22,000 to send their sons on what is supposed to be a three-month ranger training course. De Koker has been advertising the camp since mid-2006, according to a 2007 police report, which also noted that De Koker faced unrelated charges of possession of endangered species, following the confiscation of three snakes, two porcupines and a monkey from his Vereeniging premises.

Reports of the kind of activities that teens would undertake while on the camp do not suggest that a lot of “game ranging” took place. A preliminary police investigation in 2007 found that “the para-military style training presented on this course was not normal ranger training”. In that year, the court heard that De Koker and his “co-instructors” addressed each other using military ranks, and taught skills like leopard crawling and endurance running and walking.

They also allegedly inflicted treatment on the young men in their care which included torturing them with boiling water and dragging them behind a pickup truck. Last week, the Vereeniging District Court heard the testimony of Gerhard Oostuizen, 19, who shared a tent with Buys. Oosthuizen claims that Buys was chained to his bed every night, was refused permission to visit the toilet and forced to eat his own faeces. He also said that Buys was too weak to carry out some manual labour tasks, and would be beaten with planks, hosepipes and sticks when he failed to discharge his duties adequately. Oosthuizen alleged further that he saw De Koker and his employee, Michael Erasmus, 20, electrocuting Buys, who was naked and tied to a chair with his head covered in a pillowcase.

Buys’s mother told Rapport in 2011 that after she sent her son on De Koker’s course, she was repeatedly denied the chance to visit or telephone him. After six weeks, De Koker sent her a cellphone picture of Buys in which he looked thin. A second photo revealed that Buys was emaciated. When she called De Koker to demand to know what was happening, he alleged that Buys kept injuring himself, and asked for her medical aid number. A week later, Buys was admitted to hospital.

De Koker styles himself as a “general” in an organisation called “X-MilitereLeiers” (X-Military Leaders), judging from a press release sent out in September 2011, following the arrest of De Koker for the murder of Buys. In it, De Koker is described as providing “crucial services to protect the Farmers Community (Caucasian and non-white) in South Africa”. The statement also accuses the SAPS of using the murder charge as a “senseless smoke screen” in order to “try and obtain information of the farming community’s activities and self-defence projects regarding their farms”. In particular, it references the police’s confiscation of a photo taken showing De Koker with deceased AWB leader Eugene Terreblanche.

The statement also claims that Buys had been “cast away due to his rebellious nature, by his mother and her boyfriend, they dropped him off at the gate of the Leader [De Koker]… They were willing to pay thousands of rand just to be rid of him. The group known as X-Military Leaders (7,000 members) took him in and cared for him. The young man’s behavioural deviations were noticed immediately.”

Exactly what these “behavioural deviations” were (other than a physical inability to carry out certain tasks) is unclear. Buys is believed to have had some sort of learning disability, as, reportedly, did Calitz and Van der Walt. Gender activist Melanie Nathan has suggested, however, that the other aspect held in common by the three young men was that they were all perceived as “gay and clearly effeminate”.

It’s reported that De Koker told Calitz that Calitz “wasn’t a moffie [gay] and he would make a man out of him”. De Koker said this in response to Calitz’s request to leave the camp, which reportedly sparked his torture by De Koker. “With a little bit of digging [into the story], the gay reparative undertones would start to emerge,” Nathan writes, in a reference to the controversial practice of “gay reparative therapy” or “gay conversion camps”. In January, California became the first state in the US to ban gay conversion therapy for minors, after a judge concluded that the practice had no effect and was harmful to minors.

Others believe, however, that the camp may have been a recruitment centre for the AWB’s paramilitary wing, the Ystergarde (Iron Guards). Calitz’s sister suggested this in an interview with IOL in 2007. AWB leader Eugene Terreblanche denied this claim at the time, however, saying: “I don’t know who [De Koker and his co-accused]. The Ystergarde has in any case been disbanded and has definitely not regrouped.”

In 2009, when De Koker stood trial for the deaths of Calitz and Van der Walt, he got off with a suspended sentence over Calitz’s death, and escaped charges altogether for Van der Walt’s death, because it was ruled to have been caused by a heart attack. This time around, De Koker and employee Erasmus have pleaded not guilty to charges of murder, child abuse and neglect, failure to provide adequate clothing, food, housing or assistance and two charges of assault, in a case postponed from November last year. The damaging testimony of Buys’s tent-mate, Gerhard Oosthuizen, may help to shore up the state’s case.

“It’s every boy’s dream, every man’s fantasy,” writes the author of a website offering another game ranger course in South Africa. “I sent my son on this course to make him a better man,” Buys’s mother Wilma told the Telegraph last week. She would never see him conscious again. DM