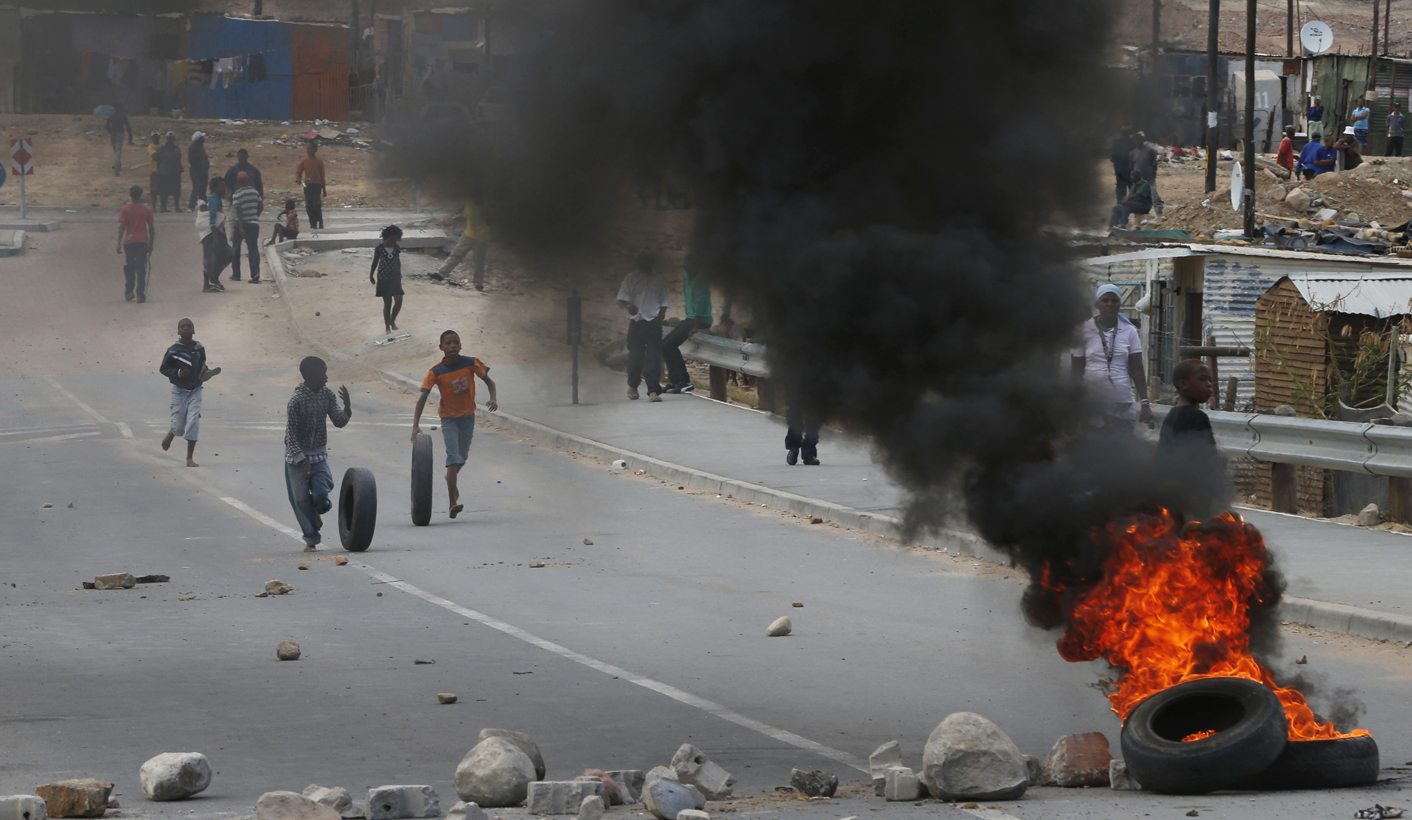 A new research project kicked off this week which aims to establish, over the course of nine months of interviews and study, exactly why and how the Western Cape farm strikes happened. The researchers will have their work cut out for them, given the number of competing versions of the “truth” already attached to the farmlands labour dispute. It’s for this reason that their work – if carried out independently and comprehensively – could be very valuable. By REBECCA DAVIS.

One of the last dates on which the Hex River farming town of De Doorns dominated headlines was 15 March, when 22 people died in a horror bus crash.The issue of aggrieved Western Cape farmworkers had fallen out of the media spotlight in the last months. Judging by the lowered media profile of De Doorns, the community which became synonymous with labour unrest between November and late January appeared to have quietened, though there were yet few firm indications of the full impact of the raised minimum wage for farmworkers.

Later in March, however, a large farmworkers’ march through Cape Town to Parliament gave some indication that conditions have not reached equilibrium yet. On 23 March, farmworkers, unions and NGOs operating under the banner of the “Farm Worker Coalition” handed over a memorandum in which they made various allegations against farmers, police and authorities. Since the protests died down, the memorandum alleged, “Farmers all over the Western Cape are applying for exemption [from paying the new minimum wage]. In many cases they trick or force workers to sign forms that show workers are happy to get less than the R105 per day.”

Further, they claimed that police investigations into the death of three men during the protests are going nowhere, and that strikers still face protest-related charges in courts all over the province. Their freedom of association is being threatened on some farms, they allege, where wary farmers will not allow unions access to the farm and prevent farmworker committees from meeting. In addition, the Farm Worker Coalition claimed that in the Citrusdal region, “some farmers are openly practising a racist divide and rule strategy as a revenge against the workers for striking”, refusing to employ black workers and only taking on coloured workers.

These accusations have yet to be substantively tested, but they certainly suggest that all is not yet peachy when it comes to labour relations on the Cape farmlands. Nonetheless, with the raising of the sectoral minimum wage on 1 March, there has been a tendency among commentators to view the farmworkers’ dispute as a thing of the past – and, indeed, we have yet to see anything recently like the organised protests that disrupted the province between November and January.

Retrospective analyses of the farm strikes have come from a number of quarters, and a number of them have expressed a similar sentiment: that despite the constant media attention on the protests, nobody really succeeded in capturing the full picture.Veteran political commentator Max du Preez recently expressed his belief that the media hadn’t dug deeply enough in the case of the Western Cape labour dispute. “The media have served the citizens badly with their analysis of events like Marikana and De Doorns,” he wrote. “They didn’t give us the backstories on these crises. Instead they simply repeated the short-cut version that these signaled the start of our own Arab Spring.”

Someone else who seemed less than impressed with the media’s work on De Doorns was DA leader and Western Cape Premier Helen Zille. Mid-March, Zille released her own analysis of the Western Cape labour unrest in her newsletter, SA Today. In it, Zille accused the ANC of exploiting the dispute to fan divisions between farmers and farmworkers, and wrote that “unsurprisingly, this narrative was parroted by many observers”.

Zille suggested that ANC councillors purported to support the farmworkers while acting as labour brokers; that local NGOs like Passop attempted to unionise workers due to ANC connections; that rival unions sought to exploit the dispute to sign up workers; and that ANC politicians and Cosatu unionists used dangerous, inflammatory language to fan workers’ anger for their own gains.

Zille presented her account of behind-the-scenes motivations as “the truth”, but until further evidence is presented, it is one among a number of competing narratives. Now a new research project, a collaboration between UCT’s Centre for African Studies and the Surplus People’s Project (SPP), aims to supply conclusive answers to some of the lingering questions hanging over the farmworkers’ protests.

The study began this week, co-led by UCT’s Lungisile Ntsebeza and the SPP’s Herschelle Milford, and is slated to take nine months to complete. Milford told the Cape Times this week that she, too, believed that there had been gaps in the media reporting on the farmworkers’ strike. “It has been neglected in media reports how workers organised themselves and really who were the leaders in the trenches,” she said, adding that one of their preliminary indications was that workers were organised by means of small, localised forums, with a report-back given to people daily after protests.

Among the questions that the project wants to see answered are those relating to who was responsible for initiating and leading the strike; how strikers were organised; why it happened in some place and not others; the role of unions and NGOs; and the issue of potential divisions between seasonal and permanent workers. The study’s methodology will take in interviews, media reports, pamphlets, the minutes of meetings, posters, photos and video footage.

The project’s research proposal presents the farm protests as unique because it suggests they represent a break from the post-1976 protest trend, where rural struggles have been “by and large led by NGOs”. The Western Cape protests differ, the proposal argues, because “they in many ways resemble the rural struggles of the 1940s, 1950s and early 1960s, which were characterised by the direct participation of those on the receiving side of harsh government policies”. They were also unprecedented because “white-claimed farms have never before seen such struggles and at this scale”.

The SPP is a pro-farmworkers’ rights organisation, and as such, it’s likely that the research will be accused of holding an intrinsic bias. But researcher Harry May, speaking on behalf of both UCT’s African Studies Centre and the SPP, told the Daily Maverick that they believe the finished project will allay any such suspicions. “The fact that the proposal is widely accessible indicates the commitment for transparency and broad inclusivity,” May said. “A wide sector of parties will be interviewed, and a broad reference team will be constituted that could add to the debates and analysis.”

May says that the study will be paid for by donor and university funding. “The donors have no vested interest other than learning from this process,” he maintains.

Labour disputes in South Africa are common, and it’s rare to see so much focused attention paid to one such dispute in particular. May argues, however, that the scrutiny is justified because of the unique features of this particular issue: the speed with which the strike spread; the wide range of worker profiles involved; and the fact that unions only came on board at a secondary stage. “It is very clear that it was not only about labour disputes, but a wider range of issues that affect farmworkers and their livelihoods,” said May. “These include living and working conditions, access to land and water, etc.”

The Daily Maverick was keen to hear from Helen Zille whether she would accept the findings of this research if it conflicted with her own analysis laid out in her recent newsletter. “Almost everything that the premier’s recent newsletter contained was drawn from previous research by independent academics and interviews with people directly involved,” Zille’s spokesperson Zak Mbhele replied. “We would not want to pre-empt the outcomes of this further research and will assess its findings on the merits of the research methodology.”

Mbhele also noted that the Western Cape Economic Development Partnership (WCEDP) has set up its own investigative panel, including academics, to investigate the issues involved. The WCEDP’s Andrew Boraine explained to the Daily Maverick, however, that the project referred to by Mbhele is “not a research process per se” but rather “an inclusive and participatory process through which stakeholders can arrive at a shared vision, common agenda and joint action plan for the agricultural sector and related rural economy”. The formal details of WCEDP’s project will be announced at the end of the month.

With so many minds applied to the same problem, it’s to be hoped that some solid conclusions will be reached. This is a contestation largely of narrative, and whatever research bodies decide about the dispute retrospectively is unlikely to make much practical difference to Western Cape farmworkers. But a greater understanding of the parties and forces involved will certainly help cast light on some of the social currents of the Western Cape, and perhaps such insights can be brought to bear in the negotiation and settlement of future disputes. DM

Photo: Children run towards a burning barricade during a strike by farm workers at De Doorns on the N1 highway, linking Cape Town and Johannesburg, January 9, 2013.REUTERS/Mike Hutchings