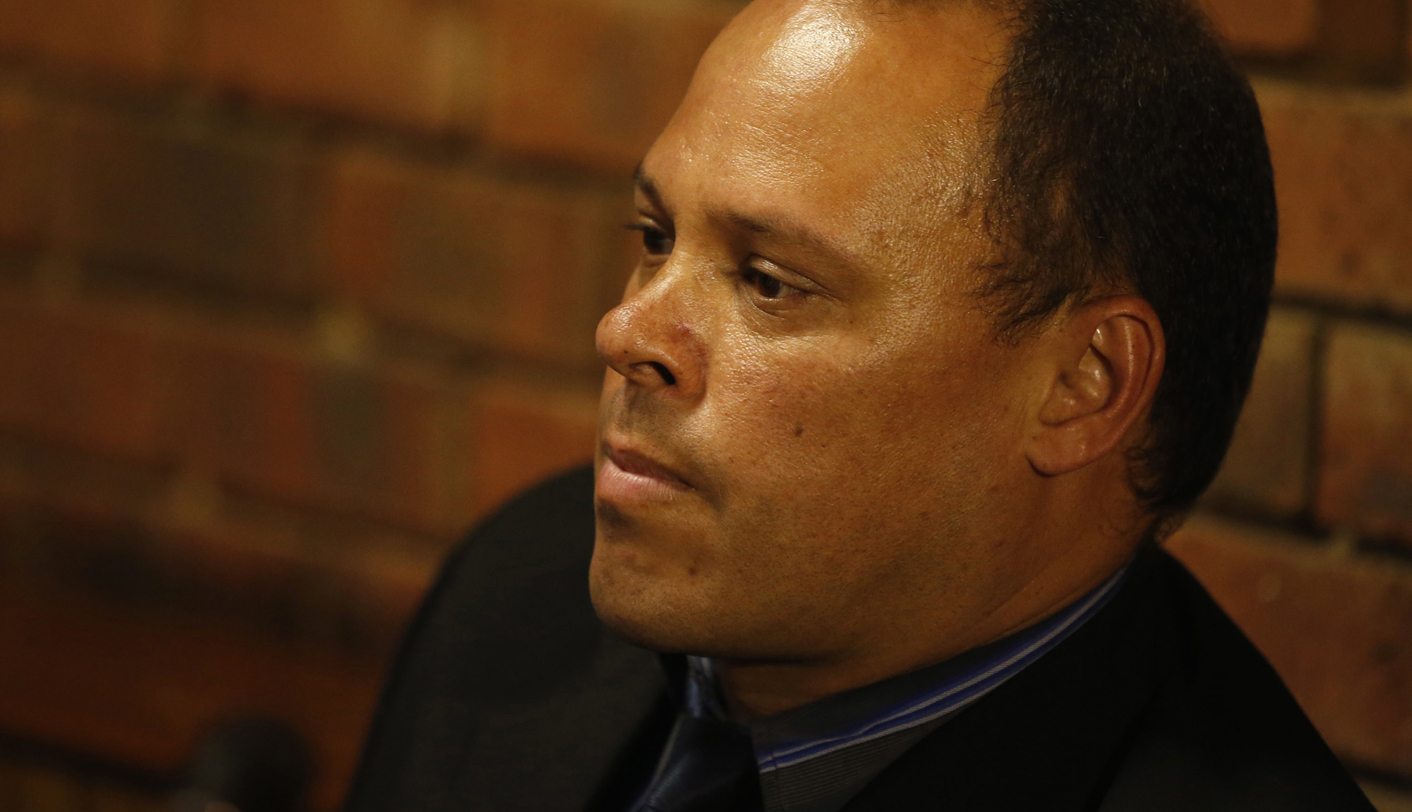 Police commissioner Riah Phiyega has confirmed the lead detective in Oscar Pistorius’ murder investigation has been taken off the case as he is facing seven attempted murder charges for opening fire on a minibus full of passengers. Phiyega said Hilton Botha said had been removed from the case pending an internal police probe. Charges against Botha over the 2011 shooting were initially dropped but the National Prosecuting Authority told Reuters they were reinstated on 4 February, 10 days before Pistorius shot girlfriend Reeva Steenkamp in his Pretoria home. At the time of the taxi shooting, Botha – a detective with 24 years on the force – was chasing a man accused of murdering a woman and disposing of her dismembered body down a drain.

The magistrate hearing Oscar Pistorius’ bail application has asked why the athlete’s affidavit made no mention of Reeva Steenkamp’s response when he shouted out to her that there were intruders in the house. Pistorius’ advocate, Barry Roux, replied that it was “unlikely” she would have replied, as she was scared. Magistrate Desmond Nair also wanted to know if it was not possible that Steenkamp had gone to the toilet earlier, and whether there was not a “little” urine in her bladder, but Roux said there was none, adding that Steenkamp had locked herself in the toilet to protect herself from an intruder, and not from Pistorius.

Fish Hoek beach in Cape Town is set for a year-long pilot project into whether shark nets would be a deterrent to the predators. Fish Hoek is the site of several deadly shark attacks, mainly by great whites. The Cape Times reports that the City of Cape Town will be allowed to install shark nets at beach after the agriculture, forestry and fisheries department approved the permit, which would allow the nets to be in place until January 2014. The report says the nets are different from those used in KwaZulu-Natal, which were designed to kill sharks. The nets at Fish Hoek will serve as a barrier as they had far smaller mesh.

Denel Dynamics, a division of state-owned Denel, South Africa’s biggest maker of defence equipment, is scoring from the demand from unmanned aerial vehicles (UAVs) more commonly known as drones. Sello Ntsihlele, executive manager for UAVs at Denel Dynamics, told Reuters this was “the best time” for UAV sales. Demand is growing fast in developing countries, in the Middle East, the Far East and Africa. The Gulf is critical in all this,” he said on the sidelines of the biennial International Defence Exhibition and Conference (IDEX) in Abu Dhabi, capital of the United Arab Emirates (UAE). The company had received up to double the number of inquiries from prospective clients than at the same conference two years ago, Ntsihlele said

The new chair of Robben Island’s museum council, Sibusiso Buthelezi, was the subject of a forensic investigation and had disciplinary action recommended against him while in the employ of the Gauteng provincial government. Buthelezi has strong ties to arts and culture minister, Paul Mashatile, The Star reports. Buthelezi was head of the housing department and Mashatile was the MEC for the same portfolio between 1999 and 2004. Buthelezi was placed on suspension in 2009 when he was Gauteng’s head of public transport, roads and works. Gauteng Premier Nomvula Mokonyane said at the time that Buthelezi “had contravened or failed to comply with key provisions of the Public Finance Management Act, Treasury regulations and Treasury supply chain management practice notes which have exposed the department to significant financial risk”.

Maladministration and corruption is rife in the low cost housing development sector, Public Protector Thuli Madonsela has told parliament, saying she had already received 5,000 complaints this year. DA spokesman on human settlements, Stevens Mokgalapa, said the “current crisis in the provision of decent housing to all is robbing thousands of South Africans of the opportunity to improve their lives. Minister Sexwale must act now to bring the crisis to an end”. Madonsela told the portfolio committee on human settlements that a disproportionate number of procurement contracts were awarded to ANC members; bills were received for houses that were not built; and that municipal inspectors failed to issue occupancy certificates that are meant to confirm the quality assurance of houses.

TWELVE MEN ARRESTED FOR GANG RAPE ON MINE

Police in Gauteng have arrested 12 men for gang-raping a woman near Driefontein Number Five shaft in Carletonville. Sapa reports that the victim and a friend were walking home to Mpahla village when illegal miners confronted them. Lieutenant-Colonel Lungelo Dlamini said the woman was hit on the head with a knobkierrie. The men then dragged her behind nearby bushes where eight men raped her. Her friend escaped unharmed. She was then taken to a shack where another four men raped her. The young woman “sustained multiple injuries on the head, face and body, and was taken to hospital” Dlamini said. The men, from Lesotho, will appear soon in the Carltoneville Magistrate’s Court. DM