Rustenburg: AMCU and NUM call a truce – for now 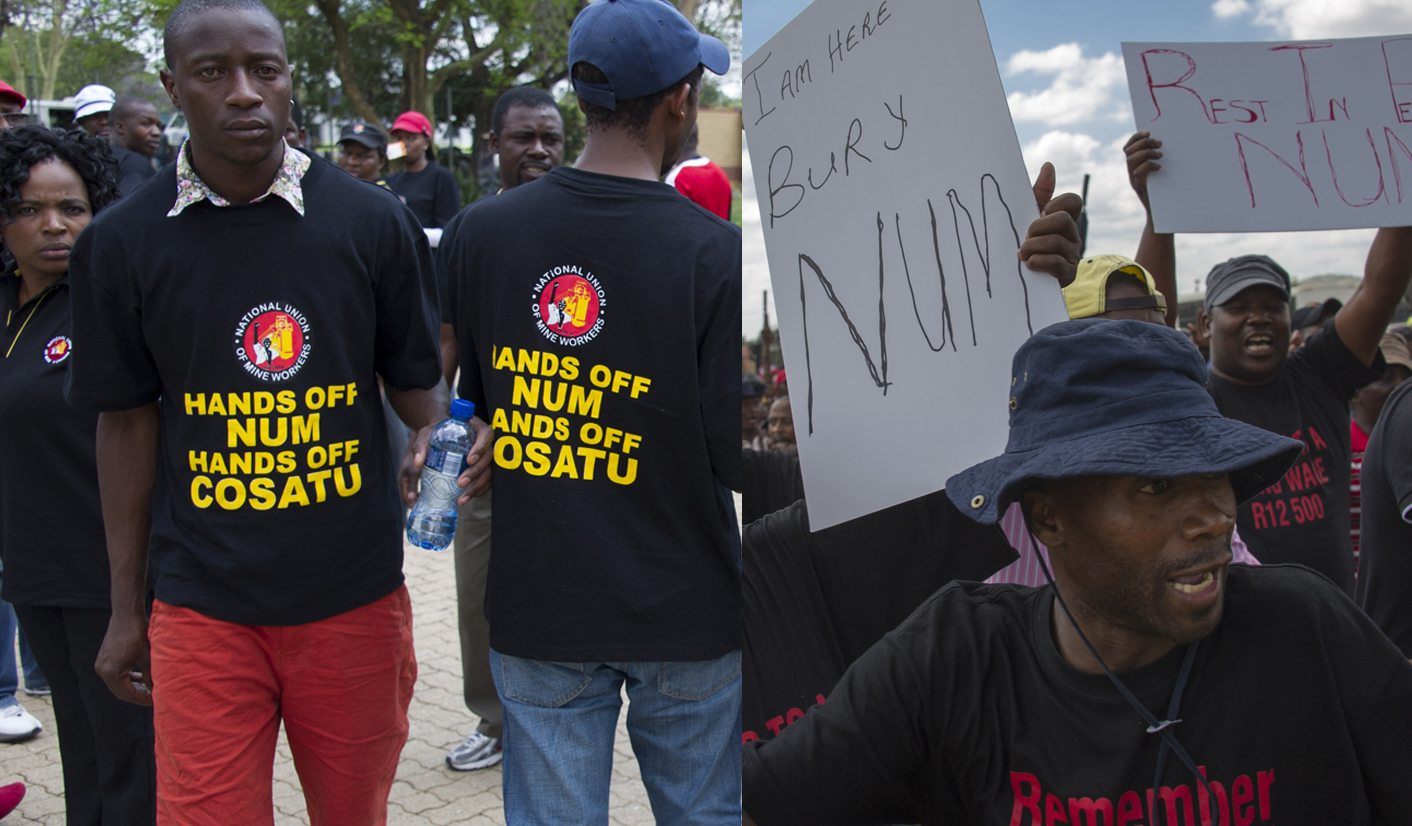 Both AMCU and NUM stopped short of instigating another Marikana at Anglo Platinum’s Siphumelele mine in Rustenburg, after mine security broke up a standoff between members of the rival unions. Calm has quickly returned, but not before a serious scare, and now leaders of both unions have agreed that maybe talking, instead of fighting, should be the way forward in the future. By SIPHO HLONGWANE.

We may never know just how close we came to another mass shooting in the platinum mining belt, but we can be sure we came close on Monday. Mine security opened fire with rubber bullets at Anglo American Platinum’s Siphumelele mine near Rustenburg in the morning to disperse a crowd of miners associated with the Association of Mining and Construction Union (AMCU) who had trapped several National Union of Mineworkers (NUM) shop stewards in the union’s office. At least thirteen people were injured, though only nine were wounded by rubber bullets. Some men were hacked with machetes.

On Tuesday morning, some Amplats workers downed tools in solidarity with their injured comrades, but the company said that a full complement of workers was expected on Wednesday following a meeting between the workers and AMCU president Joseph Mathunjwa.

It is not surprising that an unprotected strike quickly came to an end after Mathunjwa’s intervention. It has happened before, and follows a similar pattern. The workers become increasingly unhappy about something (wages usually) and then demand that their union (normally NUM – it’s been around for decades) do something about it. When NUM inevitably comes back and says that management claims there is no money, workers decide to form their own workers’ committee and embark on an unprotected strike. At some point, there is a decision for members to change their membership to AMCU. This has played out nearly everywhere the mining labour crisis went.

The killing of 34 striking miners in Marikana on 16 August 2012 further hardened attitudes between NUM and AMCU. At the commission of inquiry established following the massacre, the unions have taken turns at attacking each other, with each claiming the other is at fault for the tensions that escalated out of control.

Recently, Amplats announced that it would seek a restructure of the company that would see it close two mines, suspend four shafts and sack 14,000 workers. This caused a massive upset, with the company now in high-level consultation with the department of labour and also the department of minerals to try and find some kind of happy medium (it won’t be by a long shot, since it is a sizeable chunk of people who will be fired, but at least all sides will claim they tried).

Last week, the company delivered the news that AMCU membership now stood at 60% of the workforce, meaning that it would have to conduct a proper audit before announcing to NUM that they were no longer the biggest union. However, the local workers’ committee couldn’t wait for the process to be hashed out, and sent a message that the NUM were not welcome at the Siphumelele shafts anymore, as AMCU would be taking over. Then, as shifts changed on Monday morning, certain NUM shop stewards were spotted arriving for work. The workers then gathered and marched upon the offices, where the stewards were, to demand that they close it and leave.

According to Tebogo Mauwane, an AMCU shop steward at Siphumelele, the workers who went to the NUM office were not gathered by the union, but by their own committee. She also claimed that the four NUM stewards “forced” their way back to work (said in isiZulu), which implied that there was an informal agreement of some kind for them to stay away until the auditing process was finished, thus their presence being a breach of that agreement.

“The workers just stood outside the NUM offices. They never went in. The mine police [private security guards] came and they just shot at the crowd outside the offices. Those nine people were injured. Someone was very badly injured in the head by a rubber bullet. Everybody thought he was dead. The [security] took an iron rod and placed it in the man’s hands, just like they did in Marikana, to make it appear as if he was armed. None of the men were armed as they had just come from shift. Do you know how they search you in the mines? Nobody could have had weapons.”

However, NUM’s regional secretary Richard Mohoa disputed this version of events. He said that there was never any kind of deal or even word to NUM shop stewards to stay away from work.

“What we have is a dispute with the employer. AMCU put pressure on management to ask us to leave vacate our offices,” he said.

Mohoa expressed relief that the short strike was over, and said that hopefully attitudes at AMCU would have changed.

“We hope that they [AMCU and the workers’ committee] now realise that we have the right to work here, and associate where we want,” he said.

UASA, another minor union at Amplats, said that Section 18 of the Labour Relations Act was the cause of the tension between rival unions. The provision is that the majority union and the employer can choose what representivity threshold is required before another union can take over.

The law states: “An employer and a registered trade union whose members are a majority of the employees employed by that employer in a workplace, or the parties to a bargaining council, may conclude a collective agreement establishing a threshold of representativeness required in respect of one or more of the organisational rights referred to in sections 12, 13 and 15.”

Obviously this rule is massively disadvantageous to unions that don’t have a majority at any workplace, as the rules of the game are effectively set by the majority union.

“Yesterday’s regrettable unrest at Amplats in Rustenburg was to be expected. The latest incidence is yet another example of unintended consequences of Section 18 of the Labour Relations Act, and how this section generates tension and unhealthy energy, often leading to violence, when majority unions are favoured above smaller trade unions,” said UASA spokesman André Venter.

UASA issued a media release last year (14 August 2012) in which we warned that smaller trade unions’ struggle for recognition lay at the core of the Lonmin tragedy. Shortly thereafter, UASA called for responsible union leadership to come to the fore when tensions were again rising in mines following the Marikana massacre.

AMCU and NUM have been at war for years now, but in the last months it has become deadly. It took the Marikana massacre for the government to finally sit up and take notice. But holding meetings isn’t working when many of the causes of union strife (in legislation, growth-limiting economic policy, unfair labour policy, and so on) never change; continuing in the same vein will continue to yield poor results.

It has finally dawned on the top brass at AMCU and NUM that the current tension can’t be allowed to continue. More people will eventually die. In an interview on Radio 702, Mathunjwa and NUM president Senzeni Zokwana agreed to find a way to coexist.

Their public animosity helped stoke the flames by setting an example for lesser leaders and ordinary union members. But a peace deal is only a temporary solution, as this was just one factor in the labour crisis. While the strikes have spread from mining to agriculture – who knows where next – the response from government has been piecemeal and hesitant.

Where is the big solution to what is increasingly looking like a countrywide problem, namely finding the right grounds for growth everywhere? Without a lasting solution, the deal between Mathunjwa and Zokwana will have to be remade after blood is shed once again. DM