Marikana Commission: NUM in a deep hole over the fight that started it all 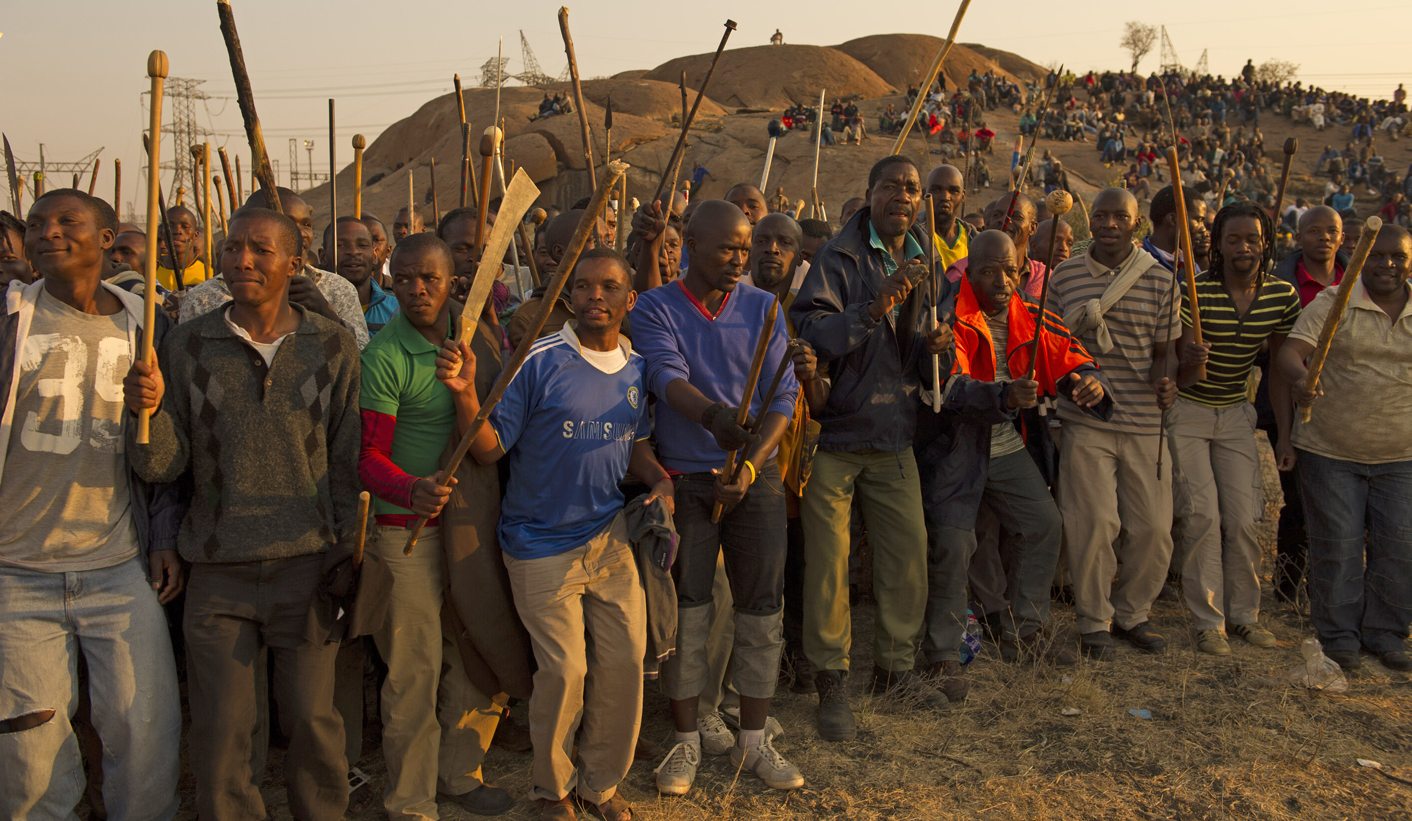 After months of posturing, the National Union of Mineworkers has begun to have its day at the Marikana Commission of Inquiry. While its president, Senzeni Zokwana, has been sent in - it appears - to explain just how important the union is, there has been some trouble for it already. The testimony of a Lonmin employee and NUM member suggests that the infamous incident of 11 August, where a march on the union offices resulted in a skirmish and some deaths, may have been not been instigated by the striking miners but by NUM security. By SIPHO HLONGWANE.

Of all the people involved in the build-up to the 16 August 2012 massacre at the Marikana mine, none were as publicly and thoroughly tongue-flayed as NUM’s president Senzeni Zokwana. When the miners refused to disarm and disperse as ordered by the police several days later, and were then prevented from marching about, as such activity had resulted in deaths just days earlier, they turned on the majority union to summon mine management to the rock outcrop they’d gathered on.

The NUM was not favoured at the time, thanks largely to a fight that happened on 11 August, when hundreds of striking miners marched on the union offices in Marikana with the intention – according to several first-hand accounts that I heard – of either shutting it, or burning it to the ground. What happened at that moment is not perfectly clear, but the aftermath was two bodies and fresh outrage on both sides.

When the incident on the 11th was first reported, it was described as a march by striking miners on the offices of NUM. When the march got there, they were met with resistance of some kind, and fled. But according to witnesses interviewed by Jared Sacks, people inside the NUM office attacked the march first and even gave chase when the miners fled the scene. They talked of two bodies (later revealed to be critically injured, not dead) that were left behind.

That particular incident was fleshed out at the Marikana Commission, but from the perspective of those who were inside the office – and at first blush the reports contradict NUM’s line about being the victim of attack. Saziso Gegeleza, an employee of Lonmin and an NUM member, testified about what happened before and during that fight.

Gegeleza said that they received information which said that the striking miners were going to attack the offices. Then “confiscated weapons were handed out to union members to defend themselves” and the office from the oncoming crowd.

“I was given a knobkierie and a spear,” Gegeleza said. He understood that the other group were armed with sticks, knives, pangas and spears.

Just as the two groups were about to meet, shots were fired and the striking miners retreated. Then the NUM group gave chase. This testimony was given under cross-examination from police advocate Ishmael Semenya, who put it to Gegeleza that the decision to attack the miners was not only inviting danger, but was the source of the heightened hostilities and rank suspicion on all sides. Simply put, Semenya heavily implied that if the NUM people had just locked their office and gone away before the striking miners got there, all the resultant bloodshed could have been avoided.

“We are going to argue it is the turning point in the whole episode… when the strikers see NUM as being opposition, people who are responsible for the attack on them,” Semenya said.

Gegeleza replied: “It’s possible that it really aggravated [them].”

He also testified that he knew all the people that stood guard inside NUM’s office that day, but was adamant that no guns were seen.

This testimony directly contradicts that of Manisela Setelele, who was also there and said that he knew the people responsible for the shooting, but would not divulge names to the commission for fear of their lives.

A picture is now emerging, and it is shorn of spin and obfuscation: NUM were marched upon on 11 August, and seem to have been panicked by the crowd and at least one person shot at the crowd from within the office. As the commission goes on, we are understanding more and more why the striking miners treated NUM with such fury from the 11th August onwards.

The question to NUM now is why did they carry the self-defence line immediately after the massacre happened when referring to what happened before? It is crucial to know that in the height of hostilities, most miners did not have access to the media to be able to tell their side of the story. Sources at the time were the police, Lonmin and the unions. It seems obvious that it suited NUM to conveniently forget what exactly happened on the 11th.

“As NUM we believe we are more victims than being responsible [for the unrest],” Senzeni Zokwana said when it was his turn to testify.

He said that the workers did not trust NUM at all, and therefore would not have given it a mandate to negotiate with Lonmin on their behalf.

“You can only get a mandate from people who have trust in you. There was no way NUM could get such a mandate,” he said.

According to him, many NUM shop stewards were forced to flee for their lives as the tension at the mine increased. This was a sign that the union was the victim, and not the instigator.

His testimony is due to continue.

Since 11 August is considered a turning point for the strikes, it will become very important to determine who was at fault on that day. So many defences at the commission rely on charging the miners with being unreasonable and violent, and now we have a reason why these miners discarded any interventions from Zokwana and other NUM leaders. A similar incident that took place some days later, involving the police, could explain why the miners were having none of it from contingent of heavily-armed special forces that arrived before the massacre on the 16th.

Which is not to say that it looks like NUM will be blamed for Marikana. Far from it. But they have conveniently left out certain details about a crucial incident to make themselves look like victims when they were equally at fault for it.

There could not have been a better time for Zokwana to testify. He’s got a lot of digging to do to get his union out of the deep hole it is now trapped in. DM