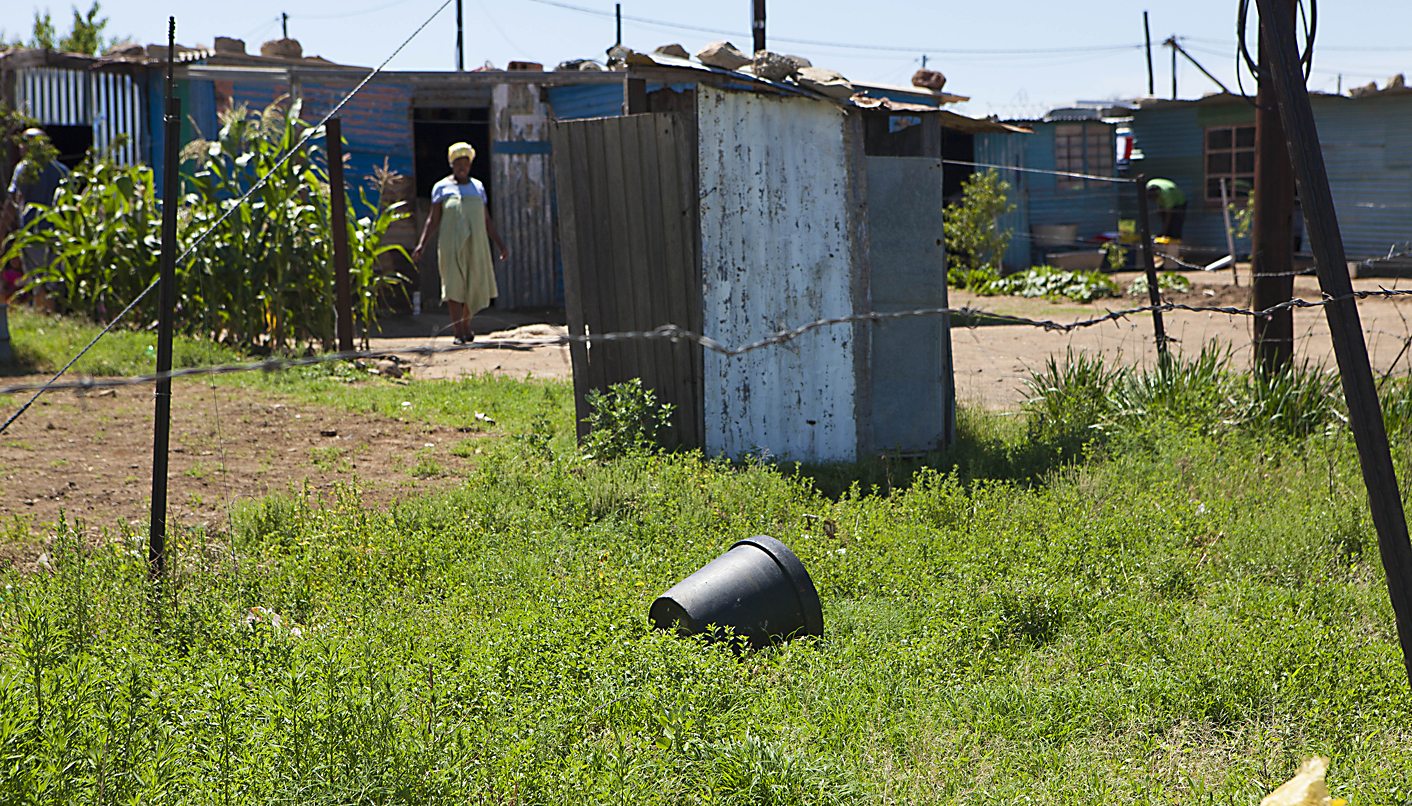 In the small Free State town of Hennenman, residents rioted last week in protest against the continued use of the bucket system in a country where sanitation is meant to be a right. They aren’t alone. While the ANC’s top brass met to decide the country’s future in Mangaung last month, GREG MARINOVICH was discovering that the bucket system is alive and well in Mangaung township – even if its residents aren’t quite so healthy.

If one stands on the small hillock that marks the centre of a shantytown called MK Square in Mangaung township, there is a clear view north of the tall buildings of Bloemfontein city centre. Though Bloemfontein is not a large city, it does boast of a few multi-story buildings, among them the Glas Huis (Glass House).

This glass-clad building catches the sun, and the eye, quite easily, even from MK Square. The Glas Huis is where the Mangaung municipality sits, and one can surmise that the view of the little hillock, where the shiny corrugated iron shacks reflect the bright Free State, sun is equally good.

Among the municipal managers and deployed cadres of the African National Congress who occupy those high offices, there must be several leading figures who grew up in Mangaung township, after which the entire municipality is named. Perhaps on a slow Wednesday or Thursday morning, if they look out of their windows they can see their own municipal workers carrying out black plastic buckets filled with the excreta of those shack dwellers, and lining them up for the tractor and trailer to collect.

Oh yes: this is the nagkar, or night car, that collects Mangaung’s shame. In an urban environment, within a R7 taxi ride of where the disused cooling towers are decorated with massive depictions of all the past ANC presidents in its 100 year history, citizens who vote for ANC still shit into a bucket that is collected just once a week. While the political royalty of the ruling party drive million-rand cars escorted by a posse of similar vehicles, and wealthy businessmen fawn and giggle at their every utterance, people from among those who voted them into their privilege must go to the toilet in the most unsanitary of conditions.

These are the politicians who have promised, in three elections now, to do away with the bucket system, yet here they still are. An anonymous MK Square resident says: “We vote, but why? We get no services anyway.”

Another resident, a migrant from the Eastern Cape has been renting a ramshackle hut for five years. Thumeka Hanxa, 37, and her partner have three children, and they often fall prey to gastro-intestinal illnesses. “The municipality hasn’t said that they will change this system.”

Other residents say that they have heard the local counsellor promise them proper sanitation on many occasions, but the years slip by and they continue to use the bucket system.

One remembers the then-president, Thabo Mbeki, promising that the bucket system would be a thing of the past. The same during the last election when Jacob Zuma was leading the ANC, and toilets became a leading electoral issue.

MK Square is not an isolated case. There are several areas in this township where the bucket system remains in use. Thousands of households have to go to the toilet in the most undignified manner. Many of these same houses also do not have their own standpipe, never mind indoor plumbing.

The danger of the bucket system cannot be underestimated. Many a child has fallen into the reeking bucket when using the toilet unsupervised. Photo: The informal settlement of MK has been in existence for the past 20 – 30 years according to residents here, but still has no infrastructure connected to the surrounding township of Mangaung. 20 December 2012, Mangaung Township, Free State, South Africa. Photo: Leonie Marinovich/NewsFire

In an area call Khutsong, things are even worse, if one can believe it. Here, hundreds of homes never see the nagkar. They have been told that their roads are unsuitable for the night car to collect their waste. They are forced to dig holes to bury their excreta. When asked what happens when it storms, an elderly woman shakes her head and gesticulates to her teenage grandchildren who were born and raised in her shack. These are youngsters who were born after the dawn of democracy – the Born Frees.

Born Frees can aspire to be anything they want in a non-racial South Africa that has legislation to ensure they can become one of the limousine- transported elite, yet they must defecate in a bucket and bury the contents in a hole next to their gate.

It seems incomprehensible that the sewerage system of the rest of Mangaung township cannot be extended to include these areas. And if that is, for some technical reason impractical, there are many smart latrines that ensure people can sit in comfort and ensure sanitation is not deadly, even without a water-born system.

There is only one reason that thousands of residents of an urban township in a provincial capital are subjected to such shame: the disinterest of those in power. DM

Photo: The informal settlement of MK has been in existence for the past 20 – 30 years according to residents here, but still has no sewage system connected to the surrounding township of Mangaung. An emptied bucket lay in the yard of a resident, ready to be put in use again. 19 December 2012, Mangaung Township, Free State, South Africa. Photo: Leonie Marinovich