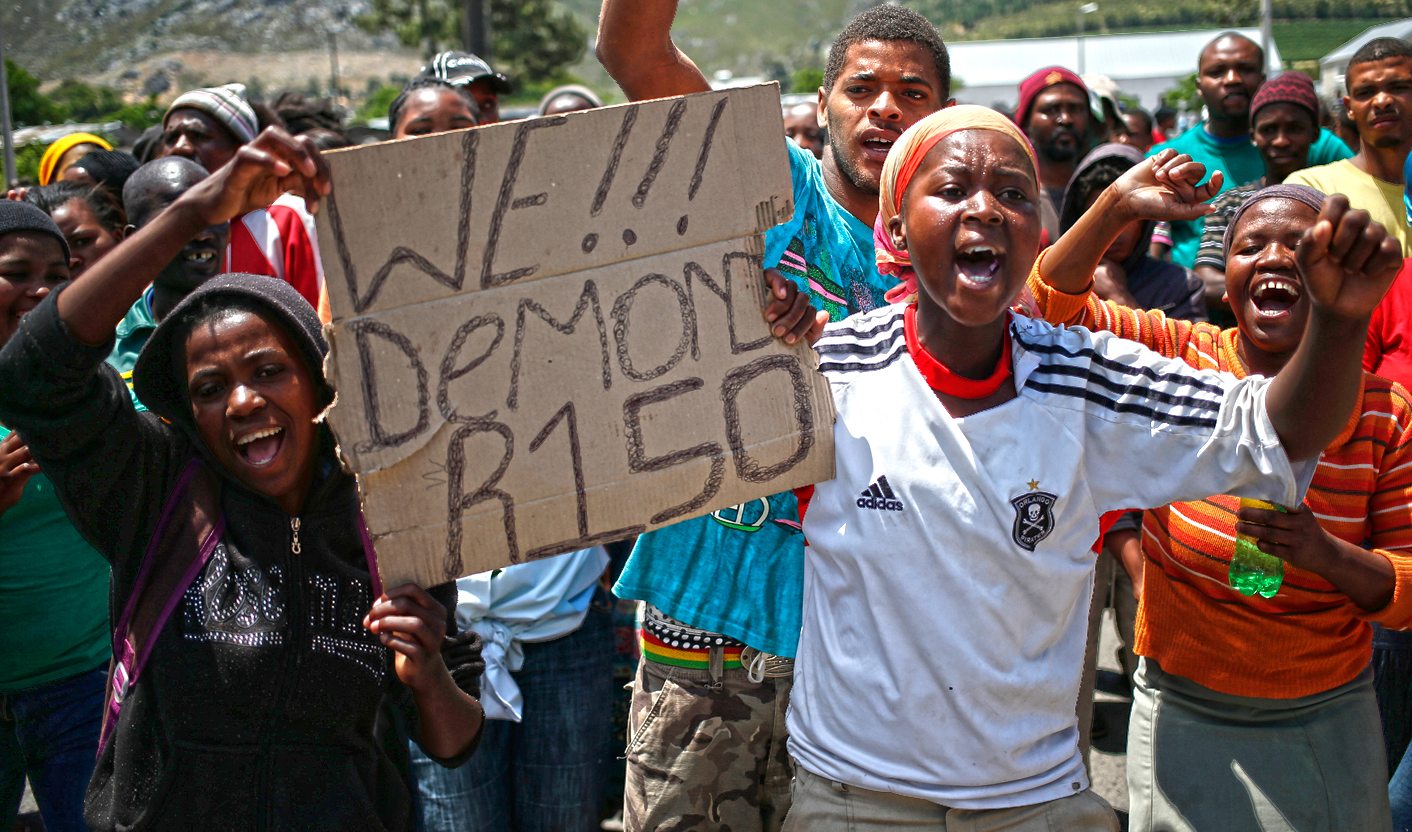 On Thursday reports indicated that most Western Cape farmworkers were back at work for the time being, with the exception of De Doorns, where thousands of people took to the streets in the afternoon. Cosatu has said the week-long suspension of the strike is to give negotiations a chance, and improve relations with farmers; Agri SA continues to insist that farm-specific negotiations are the way forward, while the CCMA wants district-level negotiations. For their part, farmers say the issues are being presented over-simplistically. By REBECCA DAVIS.

Agricultural trade association Agri SA has repeatedly argued that the only reasonable way out of the current labour dispute sees individual farmers sitting down with their workers and coming to a wage agreement. It recommends this route as the most promising solution because “relevant circumstances…may differ from farm to farm.” Critics argue, however, that this notion is unrealistic because it fails to take account of relationship dynamics between farmers and farmworkers. Brian Ashley, director of the Alternative Information Development Centre, told the Mail & Guardian this week that this negotiation model “underestimates the completely skewed power relations between farmers and workers.”

The Commission for Conciliation, Mediation and Arbitration (CCMA) also wants to see “localised” solutions to the dispute, though its vision isn’t on such a micro level. The CCMA believes that the so-called Clanwilliam Deal – where farmers in Clanwilliam were reported by Cosatu to have agreed to a R105 increase, though this was later found not to be the case for more than a handful of farms – is the kind of model that needs to be followed. CCMA director Nerine Kahn was quoted as encouraging organised agriculture to “follow the Clanwilliam example and look for local-level solutions, rather than the more lengthy process of finding agreement across the entire agricultural sector.”

Meanwhile, the Department of Labour’s town-by-town hearings on the wage issue are going ahead this week with an eye to reformulating the minimum wage at the end of February. These talks, too, have come in for some criticism. The Trust for Community Outreach and Education’s Mercia Andrews said this week that the model would by necessity exclude some workers. “Half of the time the isolation of farm workers means they don’t actually get there,” she told the M&G. “The consultations are in the main centres – Worcester or Robertson – and your farm is 38km or 42km from the centre, how are you supposed to get there?”

These are three different ways out of the labour stalemate: by the will of individual farmers, by the collective agreements of a district, and by the mandate of national government, in the form of a revised minimum wage. So far it appears that the latter is the only option Agri SA will abide by; but at the earliest, the minimum wage will be revised in about six weeks. Cosatu, meanwhile, needs evidence of negotiation progress by next week.

A perspective which seems to be fairly common among farmers of the region is that a blunt raise in workers’ wages fails to take into account the value of other facilities and services which permanent workers on some farms are currently afforded. A letter printed in the Cape Times on Thursday (available online here gave the perspective of one such farmer, who explained why she wouldn’t be tolerating any striking workers. Jami Yeats-Kastner, who runs the Stanford Hills estate near Hermanus, wrote that when she had heard that the farmworkers were intended to strike, she prepared what to tell them.

“We have written off loans if you got sick. We have paid for you, your children and your families to go to our personal doctor when you were not well… We have given you our vehicles without question if there is an emergency… We have loaned money despite the fact that so many people have left owing us. We have given you land to plant your own vegetables, but no-one has done so in five years.”

Yeats-Kastner concluded: “When you said you were hungry we have brought you food, when you forgot your lunch I have made you sandwiches. You have been part of our family and part of every celebration we have ever had. If you want to strike today, then don’t bother coming back.”

Conditions on Yeats-Kastner’s farm clearly don’t represent the lived conditions of all, or even the majority, of Cape farmworkers. But other farmers endorse her words, saying that media reports which flatly recount workers’ wages in terms of cash taken home fail to appreciate the rest of the package.

“There is a massive difference between a farmer picking up people in the local township and paying them R85 per day and a farmer who uses permanent staff,” farmer Peter de Wet told the Daily Maverick. De Wet owns the Excelsior wine estate in Robertson.

“[For the farmer who picks up workers in the township and pays them R85 per day,] that is his entire labour cost. No house, no electricity, no UIF, no bonus, no holiday pay, no medical, transport, funeral cover, etc.” De Wet says the value of the other benefits his workers receive amounts to at least an extra R30 per day on top of their take-home cash.

“For Cosatu to state the minimum wage should be R105 across the board is massively simplistic,” says De Wet. “It will punish the farms that provide permanent jobs and benefits.” He says it also fails to take account of the piecework system of remuneration. “If you push the basic minimum up too much you lose much of the effectiveness of piecework, which is how we are able to pay our staff way more than the going rate.”

De Wet warns that a punitive new minimum wage would cause farmers to have to put some formerly permanent workers on a casual basis of employment. “That means that they will work far less throughout the year and their total take-home pay will be less.” He says farmers are likely to compensate with greater mechanisation. De Wet doesn’t see how it all makes sense: “We will create far greater long term problems if we have a few people in high paying jobs and the rest totally unemployed.”

A flower farmer who spoke to the Daily Maverick on the condition of anonymity said that a flat minimum wage of R105 would also require salary adjustments higher up the scale which might be unaffordable. “The current wage levels on my farm are a reflection of the relative value, as a worker, of the specific employee, and it would be very counter-productive to increase the wage level of the poorest workers to a level matching the better workers without addressing everyone’s wage levels.”

The farmer said he had absolutely no room for negotiation with the buyers of his flowers: “I have an income determined by what the market is prepared to pay for our flowers.” He said he could not see many ways he could cut costs within his operations to cover higher wages without harming flower quality, and that his personal lifestyle was by no means extravagant. “I’m paying for the education of my sons using my home loan. My wife and I haven’t been on a holiday in the past three years and have never been on skiing trips. We drive a second hand bakkie and do not own a holiday home.”

Like de Wet, the flower farmer said that one option would be to “significantly” reduce his permanent staff quota and instead offer short-term seasonal work at a higher wage. Another would be to lay off staff. “Which employees do I cut?” he asked. “The least productive workers also have families and have almost zero prospects for employment if I let them go – not in these economic times. Laying off the highest paid workers would save me the most, but that would mean cutting the most productive and skilled workers and would be suicidal for the business. ‘Last in, first out’, would result in an ageing workforce, and ‘first in, first out’ would result in loss of experience.”

The flower farmer listed the benefits his staff receive on top of their take-home salary. “Free housing, electricity, free water and free refuse removal, solar geysers to save on electricity costs, crèche, every prescribed labour act perk, bonus, three days’ paid leave per parent per year when their children are sick, free transport to town, interest free loans to buy household goods…” All these aspects, he says, fail to be taken into account by the current blunt wage discussions.

He doesn’t think his farm is exceptional. “Many, many farmers offer the same kinds of perks, and more,” he says. “In effect we’re standing in for the deficiencies of the state in providing a decent living for the farm employees, many of whom have zero skills other than farm work to offer an employer.”

There is some evidence to suggest that it is predominantly seasonal workers striking, who may not benefit from any of the perks granted to permanent staff. At various points it has even been said that this discrepancy itself may be one cause of worker unhappiness, though this two-tiered worker system exists in most agricultural sectors in the world.

Farmers argue, however, that if the current negotiations fail to take into account aspects of the farmworker remuneration system which lie outside the take-home cash, they won’t be appraising the full picture. The long-term result, they say, could be losses for many. DM

Photo: Farmworkers march for higher wages during a strike called by the Confederation of South African Trade Unions in Franschoek, near Cape Town, December 4, 2012. REUTERS/Mike Hutchings