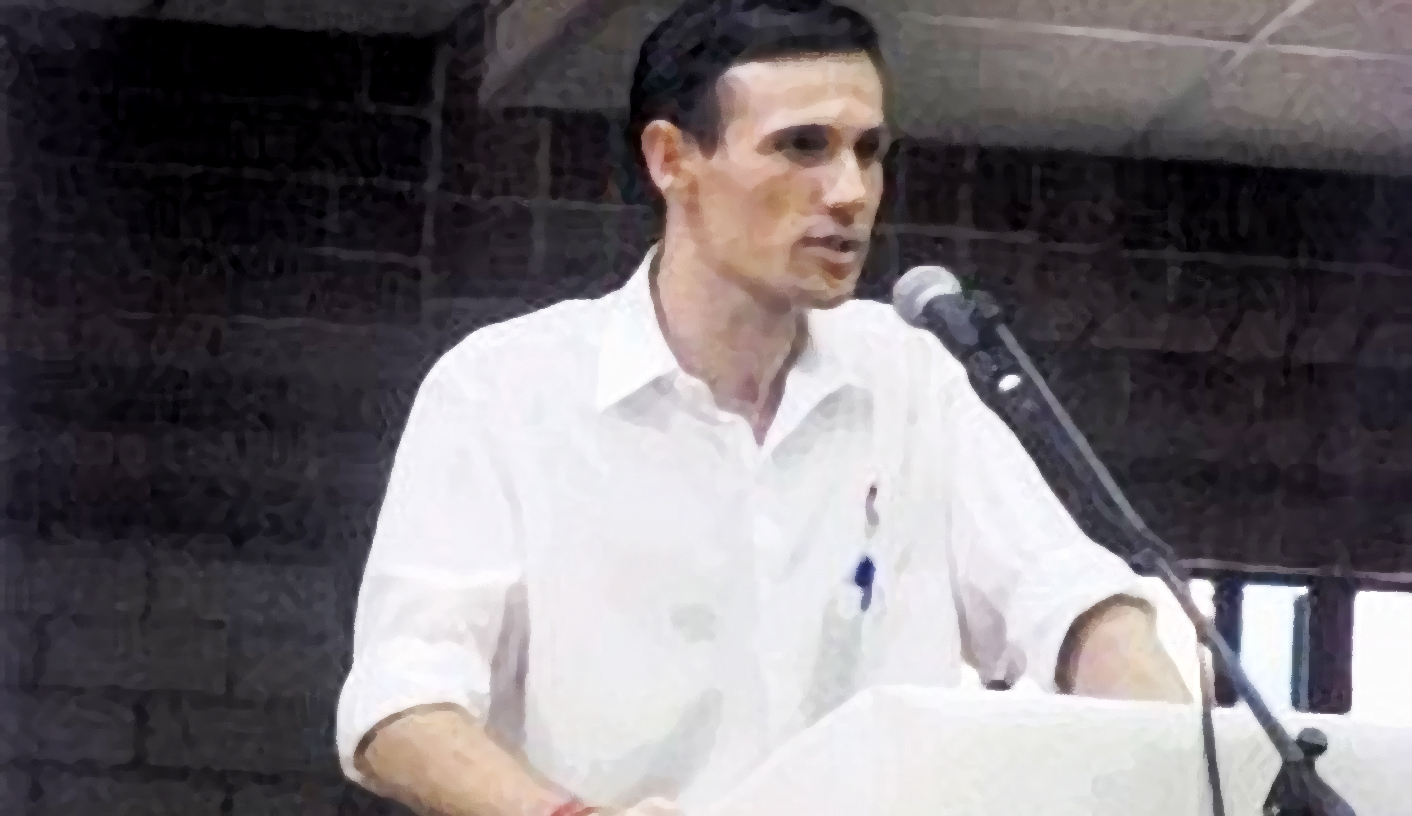 In the festive season of 1996, dozens of people were injured and some killed in an AWB bombing in the Western Cape. The youngest of the bombers said shortly after that that he was disappointed at the low death toll and would like an opportunity to do more damage. Today, Stefaans Coetzee is a changed man. And his mentor on the road to reconciliation, he says, was Apartheid arch-villain Eugene de Kock. By DE WET POTGIETER.

This Christmas Eve, sixteen years ago, a specialist hit squad of the Afrikaner Weerstandsbewegining (AWB) shattered the post-1994 peaceful transition to a democracy with some powerful bombs. The bombs ripped through the Shoprite shopping centre in Worcester in the Western Cape, which was packed with last-minute shoppers.

The squad of right-wing fanatics – who were all members of the notorious Israel Vision religious sect – were Koper Myburgh, Cliff Barnard, Jan “Voetbol” van der Westhuizen and Stefaans Coetzee. They planted one of the bombs in the shop’s huge Christmas tree for maximum human suffering and maximum deaths.

Mercifully, two of the bombs did not go off. But as the dust and debris settled on the bloody scene, bodies were strewn all over, with four people dead and 67 injured. Three children and one adult died in the blasts and another two victims died later from their injuries.

The youngest in the bomber squad was Coetzee, who had just turned 17.

Coetzee, who grew up in an orphanage in Winburg in the Free State, was not born a right-wing fanatic. He did not start his life believing that people of colour were “mud people”, as propagated by members of the Israel Vision cult. He was inducted into the doctrine of the Israel Vision by the same man who saved him from the orphanage and whom he regarded as his father. This man, Jan “Voetbol” van der Westhuizen, took him under his wing and taught him how to build and plant bombs. Apart from the Worcester massacre, Coetzee also assisted in blowing up power lines near Beaufort West in the Karoo and the bomb attack on the De Doorns train tunnel.

“I always regarded Jan as my father and never questioned anything he taught me,” Coetzee told people close to him.

Today, Coetzee says he is a changed man; he’s not bitter, and believes his wasted youth behind bars was part of his healing process – a process kicked off by three major life-changing events since 2009.

One of these was his introduction to Eugene de Kock, who would in time become a fatherly figure to him as well. Coetzee was still a hardened racist and right-wing fanatic when he met De Kock – the former commander of the notorious Vlakplaas unit of the police from the Apartheid days – in Pretoria Central prison. De Kock convinced Coetzee three years ago to turn his back on the ideology of the Israel Vision and to start a new life.

De Kock recently told the Daily Maverick he went out of his way to open up at the Truth and Reconciliation Commission (TRC) hearings, and he believes that the Worcester Bombers, as they are known, should do the same and show real remorse for their deeds before they can be considered for pardon. He shared the cell block with the Worcester Bombers in Pretoria Central for the past few years and managed to convince Coetzee to strive for change.

De Kock managed to convince him, after months of talking and counselling, to turn his back on the doctrine of the Israel Vision sect.

Another major influence in Coetzee’s decision to turn his life around was meeting one of his victims. The ageing Olga Macingwane was still limping from the damage done by Coetzee’s 1996 bomb when she walked towards him that morning just before Christmas, ready to face him.

She had been paying for groceries when the first bomb went off.

“I was so scared to come here, especially at this time of year [Christmas],” she said of her meeting with Coetzee in 2009. “I didn’t expect a special day like this.”

She told him: “Stefaans, when I see you, I see my sister’s son in you, and I cannot hate you. Come here, my boy, I forgive you; I have heard what you said, and I forgive you.

And then in February last year, two Imams, who were at the receiving end of the wrath of right-wing bombers who attacked mosques in the run-up to the 1994 elections, paid him a visit in jail and suggested he should embark on a mission of reconciliation working with the youth of South Africa once he was released from jail.

Coetzee has since described his life as a teenage terrorist to a trusted friend who assisted him in finding peace in his life and helping him in draft his pleas for reconciliation with his victims. The woman, who asked not to be named, visits Coetzee every weekend in jail. She is also the go-between liaising with him and The Restitution Foundation, which started the reconciliation project in collaboration with social justice movement Khulumani.

Coetzee, with a boyish look and shy smile on his face, says he does not believe that his 16 years in jail were a waste of his time. “Unlike other teenagers, I had to write my matric exams behind bars. I never had a matric farewell and no 21st birthday party, but my time here allowed me to make peace with myself and to prepare me for the reconciliatory path I would like to take when I am a free man one day.”

A request to the jail authorities last year, to allow Coetzee to be transferred to the Western Cape to attend a gathering of victims in Worcester on National Reconciliation Day, was turned down; somebody else read out his message begging forgiveness:

“Dear victims, since early childhood I battled to find my space in the sun. Life threw me with many lemons and at the time of the bombing, I projected what I believed was right, into a deed impacting the lives of many innocent people, the community, my family and myself. I will only be able to comprehend the full impact on the day I will be able to face you in person.

“In prison I requested a Bible and timeously searched out the truth. The truth started to fill my veins with oxygen and awaken my zeal for a new beginning by opening my heart in 2006 to participate in programs such as Khulisa, Mind Power and Restorative Justice. Embracing the truth of God’s Word, as well as the genuine care of people, [has] contributed to my sincere remorse, crying out for forgiveness and accepting Jesus Christ as my Saviour in 2007.

“Soon thereafter a desire was born in my heart to personally meet the victims whom I have wronged. This dream was fulfilled in 2009 when Olga Macingwane visited me in prison. I did not expect her to forgive me, but the love in her heart imparted grace and forgiveness which resulted in freedom beyond understanding. During the years I have learnt that happiness is created from within. There comes a time to let go of hurt by crushing the lemons thrown to me and to make lemonade from it”.

Many of the survivors of the bomb attacks in 1996 returned to the same spot last year to listen to Coetzee’s testimony. This unusual gesture was met with applause and while his friend read out the apology, it was met with a heavy silence and quite a few tears from the people. This historic event on the road to reconciliation in South Africa was the culmination of a two-year restitution project aimed at healing the town’s Apartheid wounds.

Since last year’s meeting, the community-based Worcester Restitution Project has gained widespread support. This was the start of the reconciliation project in collaboration with social justice movement Khulumani.

Last month, the Institute for Justice and Reconciliation (IJR) bestowed its 11th annual Reconciliation Award on Olga Macingwane in Cape Town for her continued commitment to community reconciliation since she travelled to Pretoria in 2009 to face one of her perpetrators in order to tell him she forgave him.

Receiving this prestigious award, Macingwane said: “When Stefaans was created by God I was not there, when I was created Stefaans wasn’t there. I said to Stefaans, ‘I will pray for you to come out of Pretoria prison so that we can work together in order to change this SA. Maybe God elected me and you to use for a better South Africa.’”

This tiny woman’s belief in “live and let live” had been such a huge inspiration for the other victims that it was announced on Monday during this year’s National Reconciliation Day remembrance in the Worcester town hall that a “Peace train” with all 67 victims on board would leave for Pretoria early next year to meet with Coetzee in jail.

“We requested permission from correctional services for Coetzee to be transferred to Worcester for Monday’s day of remembrance, but that was not possible,” said Dr Deon Snyman of the Restitution Foundation. “We then decided to put the victims on a peace train to go [and] meet with Coetzee in Pretoria. Snyman and Dr Marjorie Jobson, national director of the Khulumani support group for the victims of crime, are the driving force behind this initiative.

“We don’t want to force anybody to forgive Stefaans, but they will now have the opportunity to meet one of their perpetrators and decide for themselves,” said Snyman. “We want the victims to come to terms with the trauma they had to endure.” DM