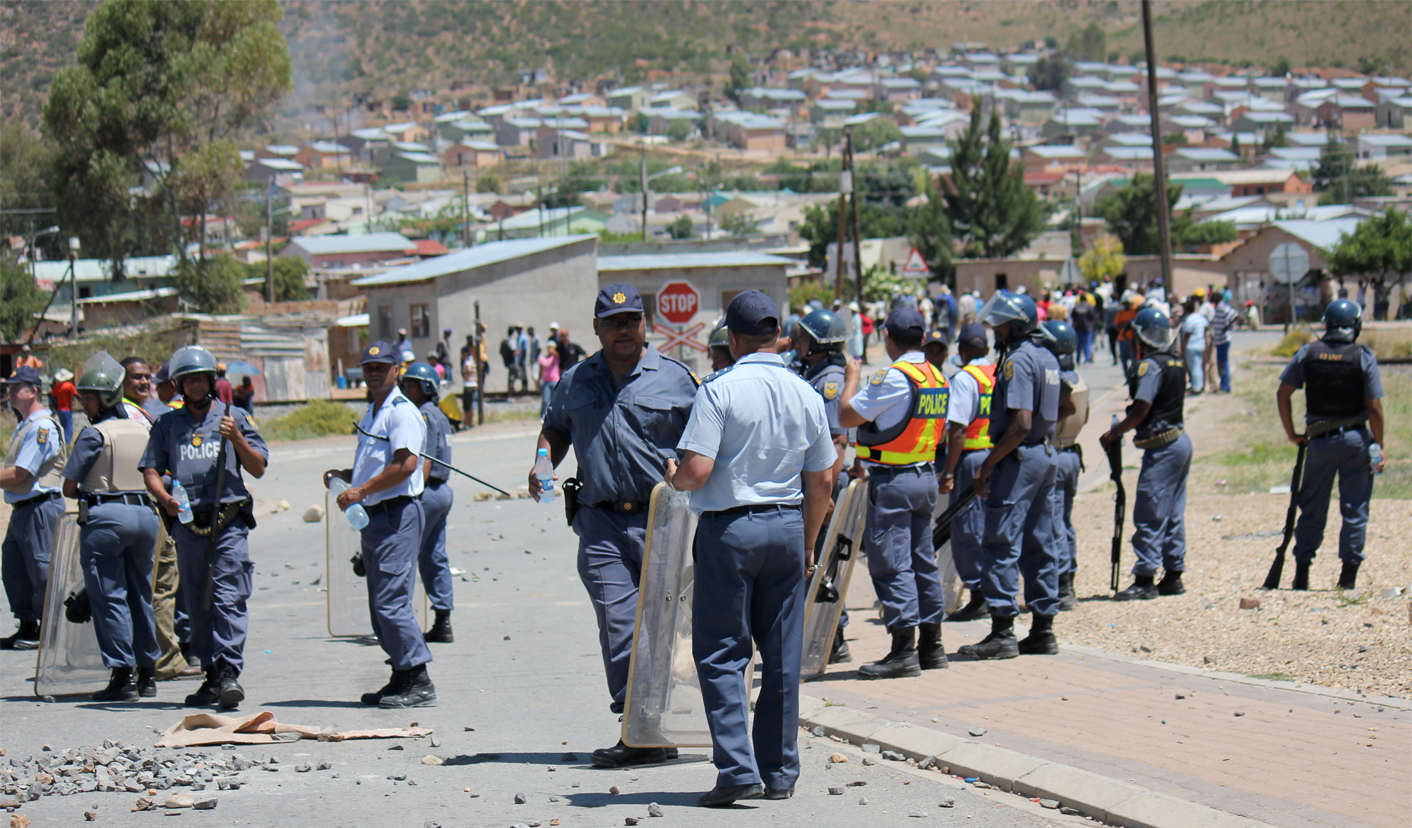 Groups representing Western Cape farmworkers have said that if their wage demands are not met by 4 December, the winelands will face renewed labour unrest. But Labour Minister Mildred Oliphant stated firmly on Tuesday that there was no way that the minimum wage for farmworkers would change before April. There could be trouble ahead. By REBECCA DAVIS.

Labour Minister Mildred Oliphant was in Geneva when the trouble seriously kicked off in the Cape winelands earlier this month. As such, much of the negotiations with farmworkers fell to Agriculture Minister Tina Joemat-Petterson – who now has bigger personal problems on her plate after being accused of excessive spending. On the basis of a widely-circulated assurance that the minimum wage for farmworkers would be reviewed by 4 December 2012, many strikers returned to work.

But there’s a major problem, which is that it is technically impossible to review the minimum wage by 4 December, according to the Basic Conditions of Employment Act. Under the terms of this act, the “sectoral determination” can only be reviewed at the earliest 12 months after the last sectoral determination was put in place. Minimum wages for farmworkers were last reviewed in March 2012. This means they can only be reviewed again in April 2013.

At a media briefing on Tuesday, Oliphant blamed Joemat-Petterson for this problem. “Either we didn’t explain this clearly to her [Joemat-Petterson] or she didn’t understand the processes,” Oliphant told reporters. Either way, it is now believed that many farmworkers expect to hear next Tuesday that the minimum wage for their sector will be raised to the demanded R150 a day. This isn’t going to happen.

Oliphant explained the steps taken thus far: notices explaining the intention to cancel the current sectoral determination, and carry out a review of the minimum wage, were published in the Government Gazette, with parties invited to give written input within 15 days. An unspecified academic institution has been approached to figure out the economic situation in the agricultural sector in order to guide the determination of a new minimum wage. And public hearings are currently ongoing on the matter, with the mediation of the CCMA, which will continue until 13 December.

The labour minister said that these processes and the relevant timelines had been communicated to Cosatu and the relevant unions, and she suggested that it was the unions’ responsibility to communicate the news to workers that the 4 December deadline wasn’t going to hold. But Cosatu’s response to Oliphant’s statement made clear that the federation wasn’t in much of a mood to cooperate.

“In her statement, it sounds more like the Minister of Farmers instead of the Minister of Labour,” Cosatu said in response. “She also misses the point that the whole country is in agreement that R69 per day is slave wages and should be increased immediately.”

While noting that it was aware that the increase of the sectoral determination took time, Cosatu said it was hoping to achieve wage raises sooner through the negotiations between AgriSA and the unions, and the minister’s statement undermined these efforts. If AgriSA and unions could find agreement, it would “definitely prevent a farmworkers’ strike on 4 December 2012.” If not, Cosatu warned, the 4 December strike “can set back labour relations on farms by decades”. Sinister-sounding stuff.

The Daily Maverick spoke to activist Mario Wanza about what was being planned for 4 December. Wanza, leader of the controversially relaunched United Democratic Front, was a major player in the attempt to occupy Rondebosch Common in January this year. His involvement in the farmworkers’ protests, however, does not fall under the remit of the UDF, but under what he calls a “broad front” of all sector unions, NGOs and relevant participants working together under the umbrella name of the Farmworkers’ Strike Coalition.

Wanza said the government’s inability to address the minimum wage issue by the 4 December was “indicative of a government that has become impotent”. He said that he could not see why the maths was so difficult to do, or the salaries so difficult to adjust. “Why can’t we acknowledge the poor and give them an extra R80 a day? Why can’t we see that the poor are the victims here?” he asked.

He explained that a mass meeting is taking place in Ashton on Wednesday. “Farmworkers have decided that we are not taking this negotiation seriously, so we are coming together,” he said. Wanza scoffed at the efficacy of the ongoing public hearings. “We don’t need public hearings! Places went up in flames, that was the public making themselves heard,” he said. “People can’t even get to these public meetings because they don’t have money.”

Wanza said the Farmworkers’ Strike Coalition was “mobilising every day” to plan for 4 December. “What is going to happen on the 4 December will be a celebration,” he said. “The poor are coming out of slavery, farmworkers are going to start owning the land, and we are going to celebrate. It will be a day of peace and friendship where we work together. People will gather in unison in the farming community and sit down, farmworker with farm owner.” The Daily Maverick asked Wanza if he had approached farm owners in this regard. Not yet, he said, but they were hoping to “sit down together” this week.

Robertson farmer Peter de Wet hadn’t heard anything about these plans yet. “Everything’s dead quiet here at the moment,” he told the Daily Maverick. De Wet owns Excelsior, a farm which produces wine grapes and citrus fruit. He said that during the protests, and in their wake, meetings had been held with the farm’s workers to assess the mood. “Our staff were concerned but rational. Obviously they’re hinting at higher salaries now, but under the circumstances who wouldn’t?”

De Wet thinks the protests began legitimately but were hijacked for political purposes. He maintains that the “majority” of farmers in the Robertson area treat their employees well, and says that those who don’t should be taken to task for giving the rest of them a bad name. “We pay well over minimum wage, we give our workers free accommodation on the farm even though we’re legally entitled to deduct from their wages for it, and they receive electricity at half the standard price.”

He says that if the minimum wage for the sector is raised, his farm will be required to make some hard decisions. “In winter, when we don’t really need a lot of people, we currently basically do job creation,” De Wet says. “That’s something we will have to look at if we have to start cutting labour costs. The more experienced workers will be fine, but we would have to look seriously at the weaker workers.”

There have also been suggestions that farmers would investigate mechanising more aspects of the procedure in order to avoid further labour complications. “I really hope we don’t have to go down the mechanisation route, as there are quality advantages of doing things by hand,” he says. “I think it would be a sad decision which would lead to more problems.”

De Wet said that while the area is quiet for now, fearful SMSes continue to circulate among the farming community, and there are concerns about what will happen on 4 December and thereafter. “We are very much apprehensive,” he said. “There are apricots that we’re starting to pick. You only get a two week window period to pick the crop, or it will be lost.”

For her part, Mildred Oliphant warned that strikers who resorted to violence would lose sympathy. “I’ve encouraged workers that if they go on strike it is their right,” she told the media on Tuesday. “But when it comes to violence then it really indicates that it’s no longer the issue of wages.” She said there was no way of knowing whether further violent protests would erupt after the 4 December deadline, but it was clearly a concern.

A labour minister who blames the agriculture minister for having given workers false hope of a speedy raise to their minimum wage. A labour activist who talks in one breath of unity and celebration, but makes it clear in the other that farmworker demands must be met. A farmer who believes he has nothing to reproach himself for when it comes to the treatment of his workers. These are just three of the kinds of characters embroiled in the winelands labour unrest. It’s a complicated situation, and it looks like there could be further complications in store next week. DM