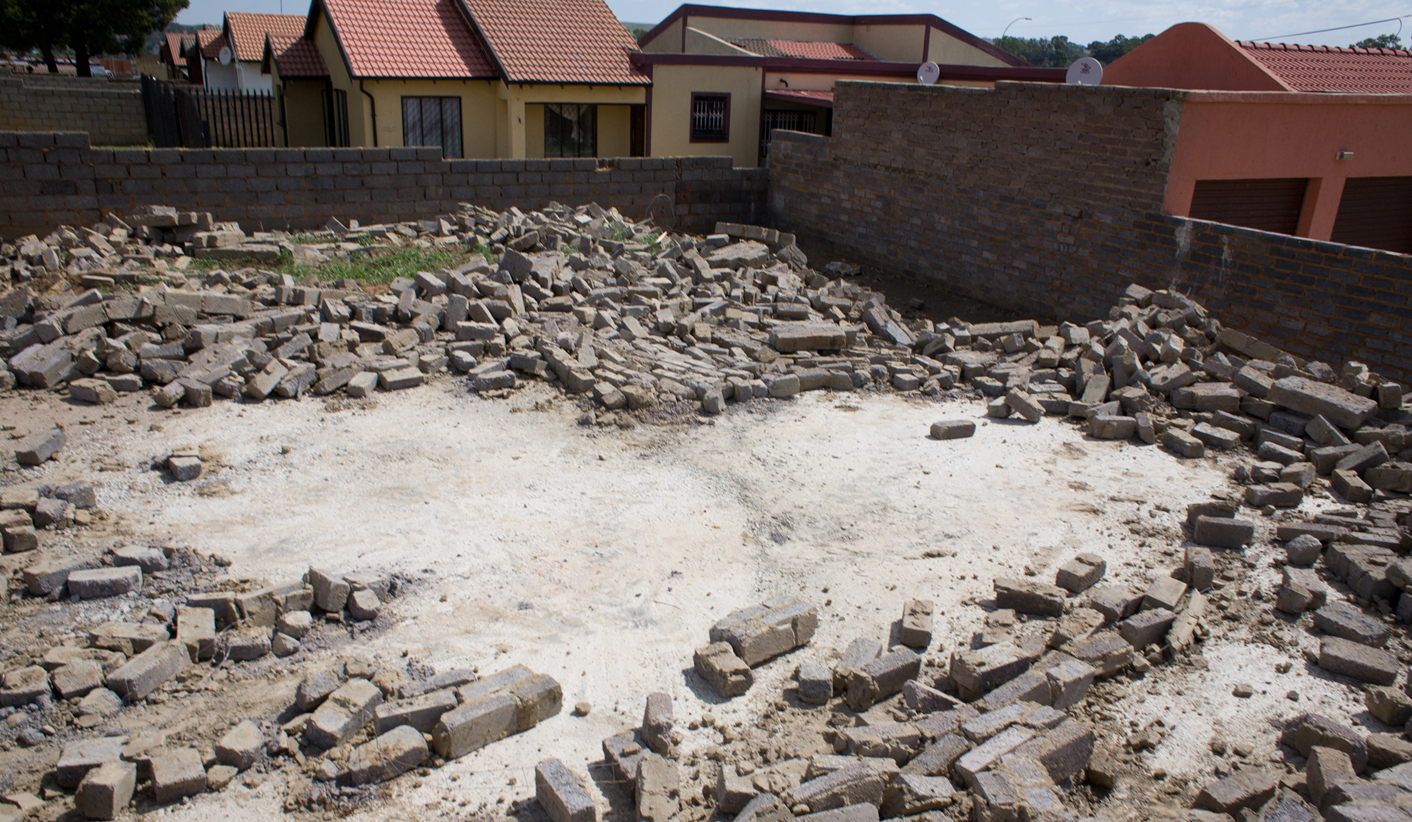 Another 35 houses were razed in Lenasia on Monday as the Gauteng Department of Local Government and Housing continued its action against properties built on land that was sold fraudulently. Despite questions about the legality of the demolitions, and even if the right buildings were targeted, they are are planned to continue. All that’s left for the residents is to lose their shelter, home and dignity. By GREG NICOLSON.

Government officials were accompanied by police on Monday morning as they took a demolition crew to the unfinished and unoccupied houses in Lenasia South Extension 4 that had been built on land sold by corrupt officials and criminal syndicates. It was the first time houses had been leveled in the area since the South African Human Rights Commission turned to the high court to grant an urgent interdict to halt the process last Thursday. The matter was postponed until Friday.

The site of families fighting for their homes has touched a chord for many South Africans, but Gauteng housing MEC Ntombi Mekgwe and her team again assured the nation of their altruistic motives.

“As a caring government, we have always maintained that our decision was correct, and that ours was a fight against corruption and organised crime, which robs our poor people of the opportunity to own a home,” she wrote in a statement. Her spokesman told eNews that these residents were in fact aware they purchased land illegally and were therefore a disgrace to the government they voted into power. (The last time I read something as preposterous as this was in Orwell’s 1984 – Ed)

Residents of Extension 4 acknowledged on Monday that their houses were built on land sold illegally but said they were duped by developers who showed them plans for the area and presented them with forged documents, replicas of real title deeds.

In 2011, Lazarus Baloyi, 42, bought his stand for R6,500 and has since spent R382,000 developing the 11-room house into which he hopes one day to move his wife and two children. The local secondary school teacher who also heads up a committee of concerned residents and members of the community crowded into his house when the wrecking crew came. Police threatened to clear the building by using teargas but Baloyi’s neighbours said they would rather die inside than let the house fall.

Photo: Lazarus Baloyi, 42, stands in the bedroom he has been living in while his house is completed. If it’s demolished he says he sees no return. (Greg Nicolson)

Baloyi said local official Papadi Makhete told him she would not rest until his house was demolished and would return with the Red Ants.

“If they break my house they break the resistance of the whole community,” said Baloyi, who suspects he is being targeted because of his involvement in the residents’ committee.

Gauteng Department of Local Government and Housing spokesman Motsamai Motlhaolwa told the Daily Maverick only unfinished and unoccupied homes were being demolished.

Baloyi has been sleeping on a mattress in his house as it nears completion. He hopes to soon bring his family from Polokwane. “It’s supposed to be a legacy,” he said inside the house. “As I’m standing in front of you now, I have no feeling. I’m a dead man walking.”

Fearful residents across Lenasia South question the province’s motives for demolishing the houses. A common complaint is that Nekgwe reneged on a deal by former MEC Humphrey Mmemezi to negotiate a solution. The community instigated legal action to challenge the September 2011 court order allowing the demolition but withdrew their challenge at Mmemezi’s request. A letter from Mmemezi’s office acknowledges that they “have abandoned legal the legal proceedings in this manner and that meaningful engagement should take place.”

The Lenasia community ditched its challenge and later met with the MEC. On 22 June 2012 he met their leadership and ordered that all construction on the land cease by 23 June. The housing department now says that because construction continued, the community was negotiating in bad faith and discussions were then ended.

Another complaint is that the wrong houses are being destroyed. Farouk Jardine, a citizen concerned about the demolitions, cross-referenced the houses to be demolished according to the court order and those razed in Extensions 13 and 4. Stands that weren’t on the court order, like Baloyi’s, said Jardine, were being demolished. The department did not respond to a request to clarify the matter.

There’s also the matter of the SA Human Rights Commission’s court action. The commission won an urgent 24-hour interdict on demolitions last week but further action was postponed until this Friday.

Housing spokesman Motlhaolwa said the postponement did not mean the interdict was extended. But SAHRC spokesman Isaac Manenga insisted that the department was violating a court order barring it from demolishing any houses until the Friday court hearing.

Photo: Children pass a cluster of demolished houses on their way home from school. Residents ask what will happen to children who return from school to find their houses razed to the ground. Despite official claims only demolished houses are being demolished, Lenasia citizens claim many were being occupied. (Greg Nicolson)

The outstanding questions add to the anger over the demolitions, building a climate of resentment and distrust towards government. One woman repeatedly demanded to be connected to Julius Malema to request help. A former MK veteran said the trauma could lead citizens who were just trying to get by in post-Apartheid South Africa to violence and “another Marikana”.

Baloyi wants the opportunity to buy his property from government. It will be a win-win, he said, with the province needing to be paid for their land and people needing housing. “Starting again I don’t think will be possible,” said Baloyi in the unfinished bedroom in which he has been living. “We are building houses ourselves. Don’t [government] say, ‘Ask not what the government can do for you but what you can do for the country?’”

The provincial department doesn’t see it that way. Mekgwe has been relentless in her claims that the land is earmarked for low-cost housing and evicting Lenasia residents will benefit the country and scare others thinking of selling land illegally. The demolitions are planned to continue, even if they cost residents their shelter, home and dignity. DM

Main photo: Mounds of bricks surround the concrete foundation of a demolished house in Lenasia, Extension 4. Most homes remain intact, but residents are scared they might be next. (Greg Nicolson)