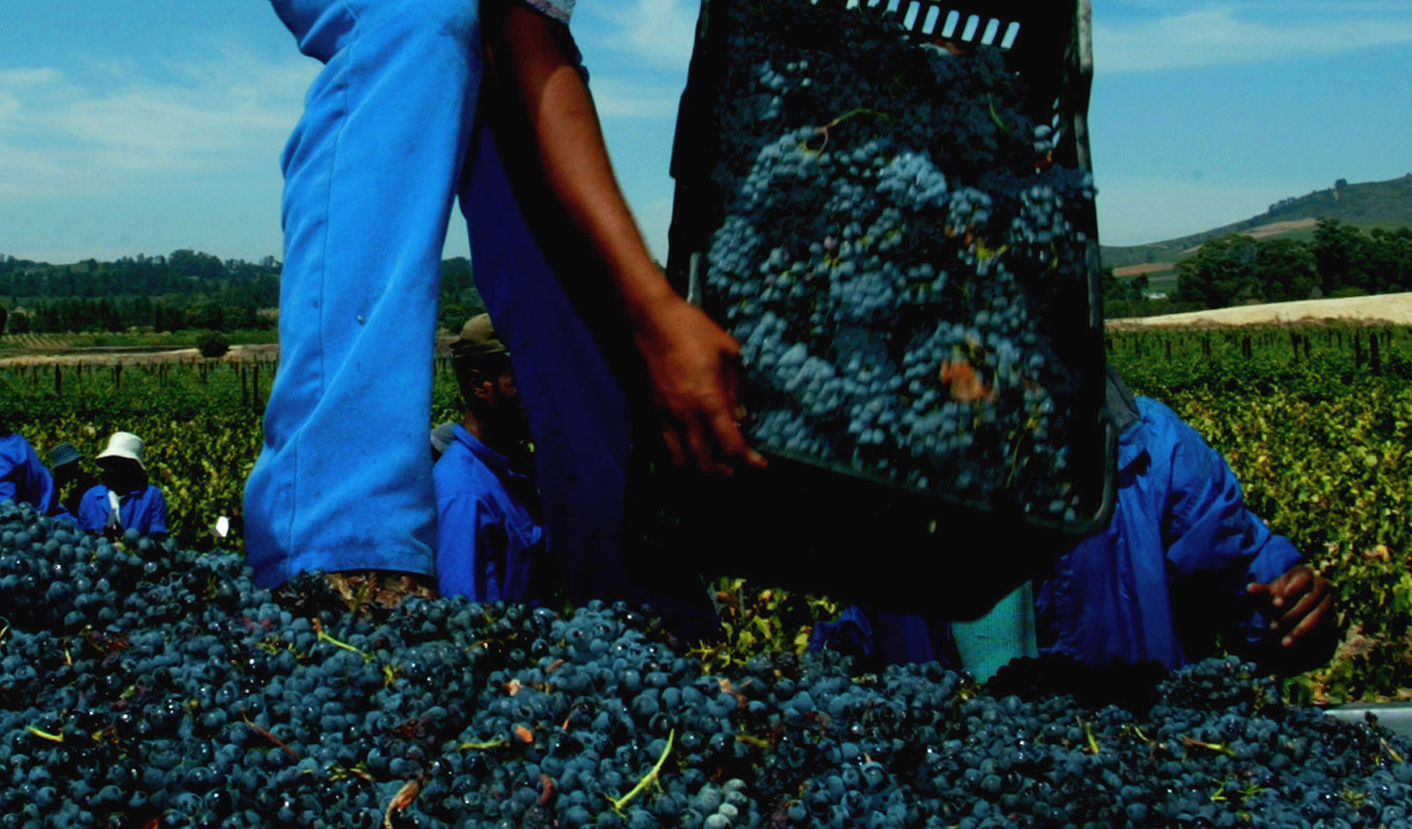 The ANC and the provincial ruling party bickered and pointed fingers in the DA-run Western Cape as farm workers burned vineyards. It has all the hallmarks of the ANC-run North West’s shame: poverty, pitiful wages, appalling living conditions and the ready exploitation of eager migrant workers. It is yet another powder keg waiting for a spark. By MANDY DE WAAL.

A fragile peace has descended on De Doorns, in the Western Cape’s Hex River Valley, where the Commission for Conciliation, Mediation and Arbitration (CCMA) is arbitrating between strikers and their employers after protests and wild rampages that saw some 30 or more hectares of vineyards burned and shops looted.

Workers in the area said they were sick and tired of being paid what they call “hunger wages”.

“The wages here are too small, R72 a day. You cannot buy anything with that money,” strike leader Shaun Janca told Daily Maverick on the phone from the small town nestled between Worcester and Touwsrivier, the country’s biggest table grape-growing region.

“If you are living with three people you still have to pay your rent money, you understand. They are taking all of that. And we cannot any longer live in the farms – there they are chasing you away just like a dog,” Yanca said amid background sounds of shouting and police sirens.

“Jy moet met die boere praat. Die geld wat hulle vir ons betaal is niks. Ons werk ons hele lewe en ons het niks. Ons werk vir wat? Vir wat?” he screamed into the phone. (“You must talk to the farmers. The money that they pay us is nothing. We work our whole lives but still we have nothing. We are working for what? For what?”)

Six people were arrested in the area for public violence, and a farm owner was arrested for attempted murder after firing on thousands of protestors when violence broke out on Monday. Media on site said protestors blocked the N1 highway, which was cusped by smoke on either side from burning vineyards in a scene reminiscent of a war zone.

The strike started 30 October when farm labourers stopped work and said they delivered a memorandum to the Western Cape government demanding higher wages. But it appears that the government only sat up and paid notice when the vineyards started to burn.

The politicians arrived amid the chaos, flames and smoke on Monday and met with the police, farmers and local farming organisations.  “Intelligence information we received said that between 5,000 and 8,000 people were mobilising to protest again. The problem then is that we didn’t know who the leadership was. After that meeting the WC cabinet members decided that the mayor of (the Breede Valley Municipality), Basil Kivedo, must address the large crowd so that we can get the message across that we must talk about these things so that they can be solved,” said Kriel.

It was decided that the CCMA were best positioned to mediate, and a CCMA commissioner from the area was called in. But very soon afterwards the politicians were given their marching orders.

“The workers were very unhappy about some of the comments made by the MEC of Agriculture of the Western Cape,” said Braam Hanekom, chairman of People Against Suffering Oppression and Poverty (Passop), which is part of the negotiations. “He said the workers’ demands were unclear, but the workers said they had already handed him a memorandum a week ago when the strike started last Thursday.

“People are hungry, they are frustrated and they are tired. They want to work but they want to see some improvement in their working conditions. The workers’ representatives told the MEC of the Agriculture that they didn’t want the politicians to interfere because the politicians couldn’t do anything about their wages. They said they wanted to speak to the farmers and the farmers were underrepresented, so when the MEC left, the farmers left too,” Hanekom said, describing the first day of negotiations.

Discussions continued on yesterday, with the DA-led provincial government claiming a very early victory for the tentative truce: “As a team (with Plato and Meyer), we were able to create an environment conducive for dialogue,” Van Rensburg told the media.

Van Rensburg speculated that a “third force” was behind the violence, protests and strikes. “I am quite sure that it is not the farm workers involved in this strike, its people from Stofland (an informal settlement with a high population of migrant workers) and other areas. I am sure there is a political motive to this strike as well because nobody wants to take responsibility for the strike, and no one wants to come forward and speak to us,” he said.

The ANC was also quick to jump into the fray. Business Day reported that Marius Fransman, deputy minister of International Relations and Cooperation and the ANC’s provincial leader, accused Van Rensburg of supporting farmers and “not the disgruntled farm workers, and calls in helicopters for reinforcements to fight unarmed labourers”.

“It is shocking that one of the most affluent and financially viable produce areas in our country are paying farm workers a pittance… Workers seem not to share in the profits there for decades now and the situation became untenable,” Fransman told Business Day. “Some time ago, the ANC again raised the importance of farmers and organised agriculture to stop discriminating against these workers. In this area, farm workers still feel the brunt of Apartheid abuse on farms,” he said, and added that it was “completely unacceptable that these things go on unchecked”. (Fairly ironic, given the conditions of mine labourers in ANC-owned regions like the North West.)

But there’s not going to be a quick or easy fix in De Doorns. “I foresee one problem, and that is that agriculture doesn’t have a bargaining council,” Kriel admitted. “In the De Doorns area there are approximately 180 farming units. There is no one that can speak on behalf of them in issues of wages, or any demands that could come from workers. I foresee a problem in this regard.”

Indeed. Farm workers have no collective body to deal with and so it will be legally and physically impossible to broker a sustainable break to the tensions, given that wages need to be negotiated individually with each separate farm owner.

And the legacy of farm workers in the area and throughout the Western and Northern Cape is a sorry, sorry saga. “The labourers are working for a minimum wage of R69.39 per day. Per week it is R346.95 a week and the workers can’t work for that amount. They say it is a ‘hunger’ wage,” activist and local labour advisor Petrus Brink told Daily Maverick.

“The poor people and the workers are getting poorer. They can’t support their families and can’t take care of their children. That is why they are becoming so aggressive, because the R346.95 is not even enough for them to survive for a week,” Brink exclaimed over the phone from the offices of the Surplus People’s Project in Citrusdal, where he consults on labour issues.

“What the workers demand at De Doorns is for the commercial farmers who are producing for the export market to pay them more. They are demanding R150 per day,” Brink added. He said many of the workers come in to do seasonal work from areas like the Eastern Cape, Zimbabwe, Mozambique and as far afield as Somalia. “This creates a condition where permanent workers feel that their employment is under threat – that they might lose their permanent jobs.”

The labourers’ perspective is that products the table grapes and citrus that are farmed in the area are for the export market and that the farm owners are making more than enough money. “The farmers make large sums of profit, but then there is no return for the workers. The farm owners reason they don’t have to bargain for farm labour because there is already a pool of cheap labour, and so if the permanent workers from the Western Cape don’t want to work for that amount, the farmers do have access to another labour market,” Brink said.

Labourers from countries outside of South Africa often don’t have work permits or passports, which enables some unscrupulous farmers to exploit the vulnerable migrant labour force. This in turn creates xenophobia because the local labour market feels threatened and under pressure.

With a cheaper migrant labour force prepared to live in squatter camps, farmers have been less inclined to offer housing, education or other social amenities that are not required by law but which would create better working relationships with labour. A report issued by Human Rights Watch in August 2011 called “Ripe with Abuse” detailed a litany of rights abuses practiced by some local farmers.

The chronicles of shame include evidence of housing on farms unfit for living; labourers being exposed to fertilizers and pesticides without the proper safety equipment; a lack of access to water while working in dehydrating conditions; the lack of toilet facilities for workers; and the undue pressure put on workers to stop them from joining unions. The report also detailed threats of evictions made against residents who had stayed on farms for long periods of time.

“The wealth and well-being these workers produce shouldn’t be rooted in human misery,” Daniel Bekele, Africa director at Human Rights Watch, said when the report was released. “The government and the industries and farmers themselves, need to do a lot more to protect people who live and work on farms.”

The Western Cape government has known about simmering tensions at places like De Doorns for a long time. “There is a lot of tension, but this isn’t the first time. There is a lack of government (political will),” Brink said. “We have made many presentations in the portfolio committee (for Rural Development and Land Reform) in parliament in Cape Town. We presented this to the portfolio committee that the housing conditions are very bad. Farm owners are paying the minimum wage and you can’t even take the minimum wage and upgrade your own home. We had these presentations and we also worked with Human Rights Watch.”

Brink and the NGOs made representations to the Rural Development and Land Reform committee to get members to visit local farms because farm owner representatives said the activists were lying about the conditions there. “The members of the committee came and they filed their report and said what they saw was shocking. They closed two of the farms and demanded that farms upgrade housing and revise labour practices,” Brink said.

That was more than a year ago. Despite this, De Doorns went up in flames in another spark of the tinderbox that is South Africa, where many of those who own the means of production have yet to learn that poverty brews revolution and a hatred of a capitalist system. DM