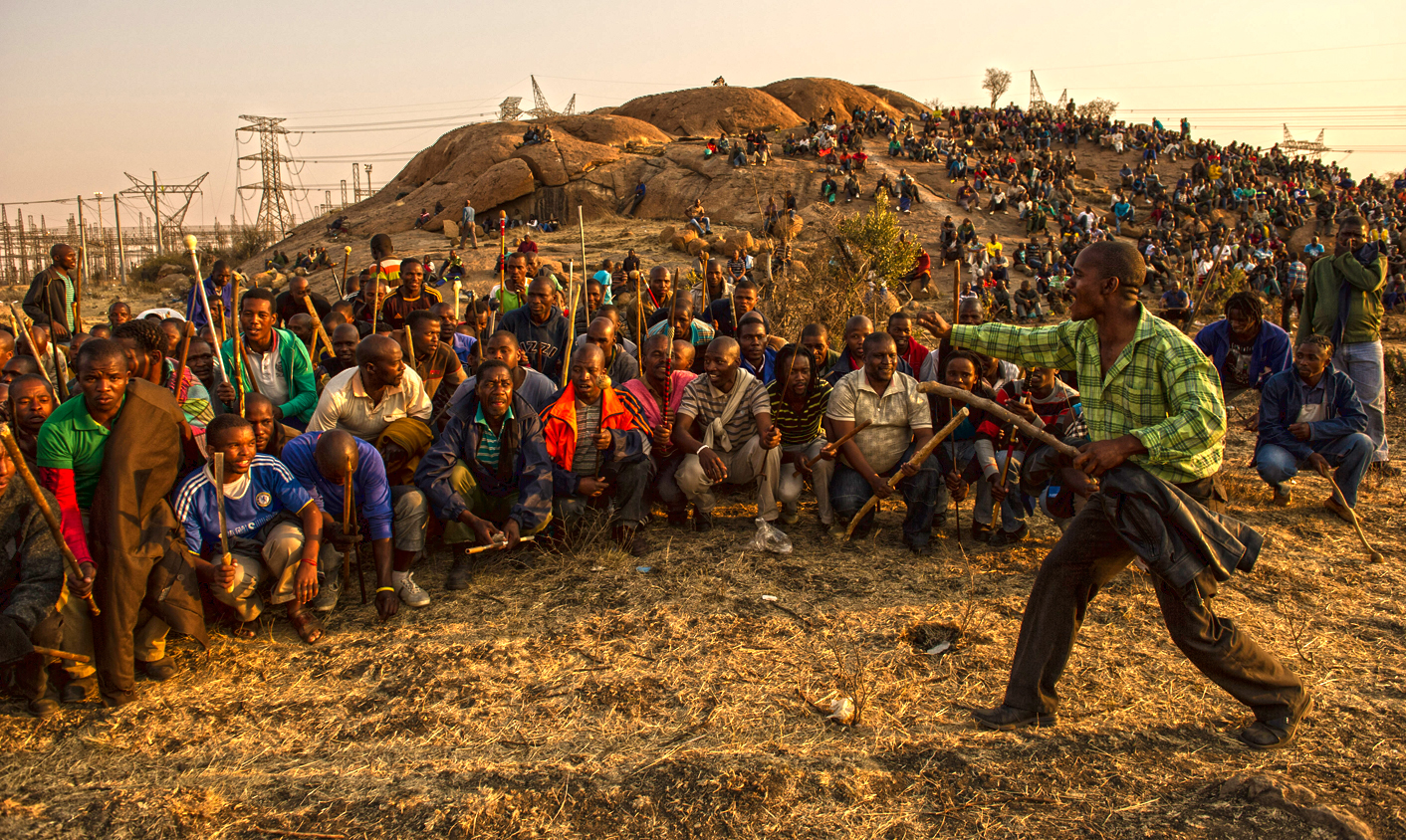 On the first day back after a postponement of some weeks, most of the opening statements were read at the Marikana Commission of Inquiry, giving us a good indication of what will be contested. The scene is set for what will surely be one of the toughest legal contests in recent years. By SIPHO HLONGWANE.

Lawyers representing the police, Lonmin, the Association of Mineworkers and Construction Union (Amcu), the National Union of Mineworkers (NUM) as well the families of some of the 34 miners who were shot and killed by the police on 16 August all made opening statements at the commission of inquiry, chaired by the retired judge Ian Farlam. Also making submissions and thus entitled to a statement was George Bizos, acting for the Legal Resources Centre.

It is already clear that this will in all likelihood be a hot contest as lawyers presented different versions of the events leading up to the 16 August massacre.

Ishmael Semenya, representing the police, said he would show the court that the police had acted under extreme duress and the threat of death when they shot the miners. He presented a picture of a pitched battle. Numerous attempts to peacefully disarm the miners had been made, he said, but to no avail.

“They had refused and proceeded to the koppie, killing two police officers and seriously injuring one. They also robbed the police officers of two pistols, an R5 rifle, a shotgun, two-way radio and ammunition. Teargas, stun-grenades and rubber bullets were used to disperse the protesting miners. None of these measures had deterred the protesters. Two days before the shooting police had been in negotiations with the mineworkers, and had asked them to peacefully disarm,” Semenya said.

The police will also attempt to convince commissioners Ian Farlam, Bantubonke Tokota and Pingla Hemraj, that the circumstances of Marikana were unique, in that the police had never been forced to deal with thousands of armed men who charged at them, seemingly with complete disregard to their own lives.

Bizos almost immediately contradicted Semenya. He said he would lead evidence that would show the shootings were an act of revenge by the police for the deaths of two colleagues some days earlier. He said that the Constitution, legislated and common law do not permit murder as an act of revenge.

The Legal Resources Centre did not come across a single piece of evidence showing that any police suffered so much as a scratch on 16 August, which flies in the face of the claim that they acted to protect their own lives.

He also said the use of lethal force by the police was not only unlawful, it was also unheard of historically.

“We are going to call in experts to prove that what the police did on August 16 is unheard of in the whole world. We are going to ask for permission to cross-examine those who gave permission,” he said. “If you have 3,000 protesting people on one side, some of them armed, and you turn R5s and R6s on them, that is unique and historically that is incorrect.”

Dumisa Ntsebeza, who represented the families of 21 dead miners said, “We will invite the commission to make the finding that the miners were unlawfully killed by the SAPS.”

He said he intended to lead evidence directly contradicting the police version of events.

Ntsebeza was also clearly distressed by the police advocate’s strategy of banging on about the potion the men took before the deadly confrontation. “The miners were considered to be possessed vermin which… had to be destroyed like vermin by police and they… were killed like vermin,” he said.

Karel Tip, NUM’s lawyer, highlighted the death of local NUM Secretary Daluvuyo Bongo as just one of the examples that his team would use to build a picture of the striking miners’ total disregard for the rights of other people, especially NUM members and leaders. The union will argue that the use of force by the police was justified.

Some of the parties had not yet presented opening statements when Farlam adjourned the commission for the day.

The commission began its work at the beginning of October, but it was then delayed for a few weeks so that some relatives of the dead miners could be brought to Rustenburg.

The terms of reference for the commission are sweeping, and as a result the process is likely to take longer than the four months President Jacob Zuma prescribed when he announced it. The conduct of Lonmin, NUM, Amcu, the police and the Department of Mineral Resources will be examined by the commission to establish their roles in the events that led to the 44 deaths.

Specifically referring to the police, the commission must establish the nature, extent and application of any standing orders, policy considerations, legislation or other instructions in dealing with the situation which gave rise to this incidents; the facts and circumstances which gave rise to the use of force and whether this was reasonable and justifiable in the particular circumstances; the role played by SAPS through its respective units, individually and collectively in dealing with the incidents; and whether by act or omission, it directly or indirectly caused loss of life or harm to persons or property.