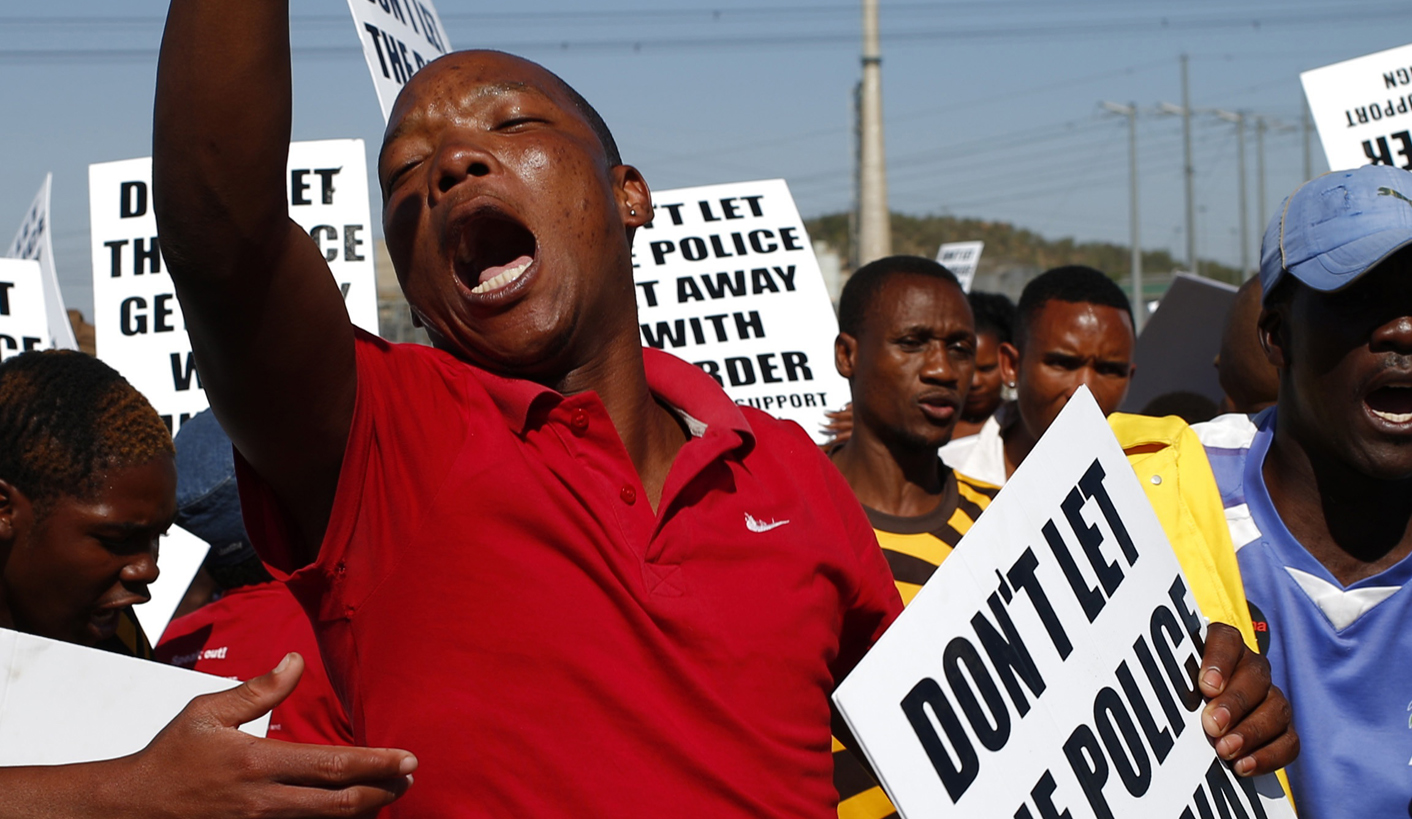 Several men from Marikana were arrested and their companions intimidated after they returned from the Marikana Commission of Inquiry in Rustenburg. Police officers, armed to the teeth, pointed guns from all directions and ordered their captives to look the other way, or get shot. By SIPHO HLONGWANE.

Not very long after Judge Ian Farlam adjourned the Marikana Commission of Inquiry at the Rustenburg Civic Centre, when some of the Marikana community who attended were on their way back to their home some 45 kilometres to the east, they were stopped by a contingent of armed police who harassed the group and took some men with them.

According to a report by one eyewitness, they were forced to stop by a group of highly agitated police officers who were armed to the teeth. The cops were yelling and pointing guns from all directions, said Thumeka Magwangwana, one of the women travelling in the minibus that was pulled over.

On the road between Bapong and Majakaneng, some 20 kilometres away from Marikana, they were stopped.

“We left the commission at about six in the evening. We were going back to our homes, but we needed to drop the boys off at Majakaneng where they were staying. Between there and Bapong we found some police Nyalas at the intersection,” she said.

The police then reportedly stopped the vehicle, while pointing guns at it, ordered everyone out of the car. The men and women were separated and made to lie on the floor. Magwangwana said that the police ordered them to look at away and not at their faces on pain of being shot. She was specifically threatened with shooting after she disobeyed the order.

The police were looking for Zamikhaya Ndude, Sithembele Sohadi, Loyiso Mtsheketshe, Anele Xole and other men whose names could not be ascertained. These men have been prominent in the strike action at Lonmin’s Marikana operation, and some of them were present at the commission. Magwangwana confirmed this by saying that the men arrested were wearing black t-shirts bearing messages calling for justice for the 34 murdered on 16 August.

This is what this reporter, too, saw on Tuesday. The faces of those men were familiar, and I’d interviewed at least two of them at the Wonderkop informal settlement following the police massacre.

Magwangwana said that the event had left her traumatised. “I don’t think I will be able to sleep. What am I supposed to think about what just happened? If the police wanted to arrest the boys, why didn’t they just ask nicely? We were not going to fight. There was no need to harass or intimidate us.”

She said that it was totally unacceptable that the men were arrested while the commission was ongoing, as she believed that at least one of them would be a key witness.

Efforts to reach the police for comment on Tuesday were unsuccessful.

On Tuesday, before he began his opening remarks, Dali Mpofu (acting on behalf of the 272 arrested miners) complained that his job was made very difficult by the fact that not only did he need to consult with hundreds of clients for the case, but some of them who he intended to call as key witnesses were getting arrested by the police. He specifically mentioned Xolani Nzuza, and will surely now add the names of that man’s companions and comrades to the list.

There has been a pattern of intimidation and shady arrests right across the labour unrest in the mining industry, not just at Marikana. Daily Maverick interviewed several people at Gold Fields near Carletonville last week, who also said that the police were raiding hostels at night and arresting people. The same thing was being reported in Marikana from about the time of the 16 August massacre. Some raids or dispersal missions were conducted in broad daylight and resulted, according to interviews we conducted, in widespread harm that went far beyond the perpetrators of the unrest in the area. DM

Photo: Demonstrators wave placards during a site inspection by the judicial commission of inquiry into the shootings at Lonmin’s Marikana mine October 1, 2012. A retired judge toured the spot where police killed 34 striking platinum miners in August as he opened a judicial inquiry on Monday into South Africa’s bloodiest security incident since the end of apartheid. Ian Farlam has four months to uncover the events surrounding the August 16 “Marikana massacre”, which sparked intense criticism not only of the police but also of mining bosses, unions, the ruling African National Congress (ANC) and President Jacob Zuma. REUTERS/Mike Hutchings