Marikana: The next goal for the workers – split from NUM 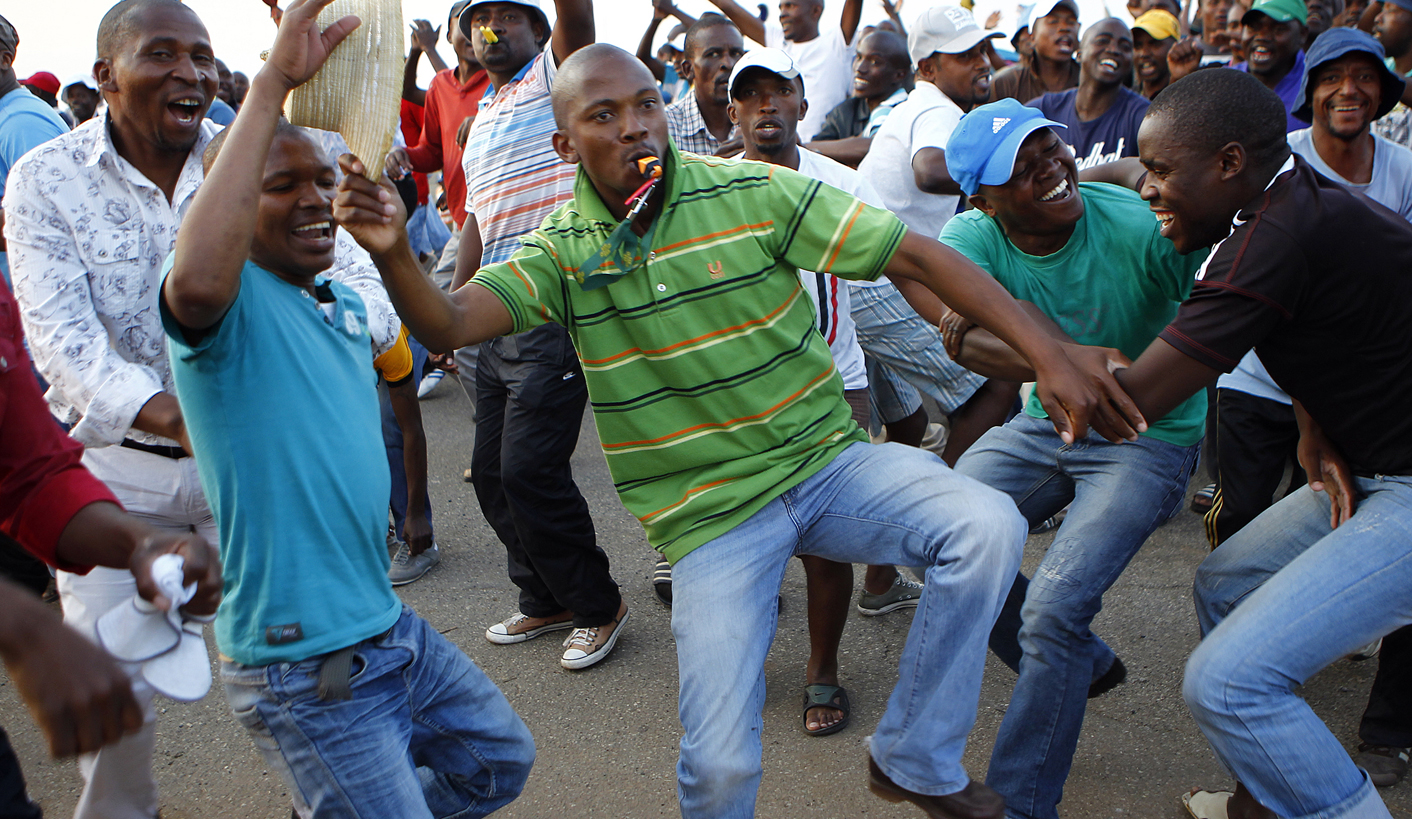 There was a festive atmosphere in Marikana on Wednesday as workers cheered on the wage agreement that ended the six-week long strike at Lonmin’s operations in the town. But as workers prepared to return to work on Thursday, they have had set their sights on challenging the National Union of Mineworkers’ dominance at the mine. By KHADIJA PATEL.

In the parking lot of the Marikana Shopping Centre, a man gets out of a white Mercedes-Benz van bearing the Lonmin brand. Dressed in a black t-shirt and jeans, he strolls into the Pep store and emerges a few minutes later. He heads back to his car, chatting animatedly with a passer-by. He walks with a confident stride, standing out in the small crowd of shoppers.

But it isn’t just his confidence that makes him stand out from the crowd. Emblazoned across the front of his t-shirt is the legend, “Hands off NUM” and across the back, “Hands off COSATU”.

To show such allegiance to the National Union of Mineworkers here in Marikana, where the union is so unpopular, he must be a very brave man – or a very stupid one.

We are determined to find out which.

We approach him, as he stands beside the open passenger door of the car, introducing ourselves with pointed references to the Dictaphone and camera. We are journalists, we explain. We come in peace.

He shakes his head wearily. “I have nothing to say to you,” he says.

He is certainly not menacing. Rather, he seems to express a profound disinterest in us, as well as our questions about his thoughts on the end of the strike.

We press on, smiles pasted securely on our faces, hoping to persuade him to speak to us anyway.

“I have nothing to say to you,” he repeats, this time with a hint of impatience.

Daily Maverick: Are you an NUM member at Lonmin?

Comrade NUM: I am a shaft steward.

Daily Maverick: Do you feel safer now that the strike has ended?

Comrade NUM: I am not afraid.

Daily Maverick: But surely you must have feared for your own life when the steward was killed last week?

Comrade NUM: Listen, I have never been afraid.

We watch as he walks around the van. A brave man indeed.

It is, however, another conversation, outside of the town itself, in the crowd of people assembled at Wonderkop Stadium near Lonmin’s smelting operation, that tells the story of NUM more directly.

Ruben Senjane was the chairperson of a workers’ committee at NUM, but was expelled. The rest of the committee was suspended. According to him, he was expelled for being too forthright about NUM’s inadequacies in their representation of workers.

Despite the bravado of the NUM cadre in town, Senjane says NUM office bearers have been in hiding in Marikana. “Most NUM office bearers were granted leave by management because some of them said they feared for their lives,” he says.

He tells Daily Maverick that workers held meetings overnight to transfer their union membership to the Association of Mineworkers and Construction Union (Amcu) as soon as they returned to work on Thursday.

“Yesterday about 200 employees had taken their membership from NUM to Amcu, because now Amcu is the messiah for the employees. Never in the history of Lonmin and NUM have the employees actually got what they want, especially such a huge percentage of increase,” he says.

The meetings continued on Wednesday with one particular meeting concluding that NUM had to be shut down at Lonmin’s operations.

“There was a meeting at [Eastern Platinum] today [Wednesday],” he explains.

“So the decision that has been taken today at Eastern Platinum [one of four of Lonmin’s operations in its Marikana complex] is that tomorrow all workers are going back to work, but tomorrow the offices of NUM are going to be closed and they want to join Amcu,” Senjane says.

Researchers from the University of Johannesburg who are working in Marikana, as well as a number of mineworkers, further corroborate Senjane’s story. Workers will return to work ton Thursday, but they are set to lobby NUM to have their membership to the Cosatu-affiliated union cancelled, in order for them to join Amcu immediately. They are set as well to demand the closure of NUM’s offices in Marikana and demand that NUM no longer benefit as a recognised trade union at Lonmin.

“Then, there will be a date agreed by all employees to go and close the branch offices [of NUM] forever,” Senjane tells Daily Maverick.

NUM was holding a special national executive committee on Wednesday night to discuss the outcome of the Marikana strike. Spokesperson Lesiba Seshoka told Daily Maverick he was unaware of the intention by the Lonmin workers to resign from NUM. He said they had not learned of any such intention and were confident that their members would remain with the NUM.

But even if workers do not succeed in outmuscling NUM from Lonmin, NUM has already been granted “a cooling-down period” to beef up its membership base at the mine. According to mining insiders, the cooling-down period is included between businesses and unions “because trade union membership in a workplace can fall for many reasons – boredom, natural staff turnover and even administrative problems with the deduction of stop orders for membership fees”.

Lonmin’s head of human resources, Bernard Makwena, claimed last month that NUM was informed in March that the union’s membership at Lonmin had fallen below the minimum 51% set out in a negotiation agreement. The agreement stipulated that NUM would get six months – in this case until September 2012 – to restore membership figures, or new negotiations would have to begin.

Makwena claimed that 21% of Lonmin employees were Amcu members, which means an upsurge of Amcu membership in the coming days and weeks could see NUM losing its privilege as a bargaining partner – not that they were very effective in the most recent negotiations, anyway.

But in the meantime, there may yet be more trouble brewing in Marikana – and NUM doesn’t look well poised to forestall it. DM

Photo: Striking miners dance and cheer after they were informed of a 22 percent wage increase offer outside Lonmin’s Marikana mine, September 18, 2012. Striking miners at the mine said on Tuesday they accepted a management pay rise offer and would return to work on Thursday after six weeks of mining sector unrest that shook Africa’s largest economy. REUTERS/Siphiwe Sibeko