University election season: DA fights for the young hearts – and their future votes 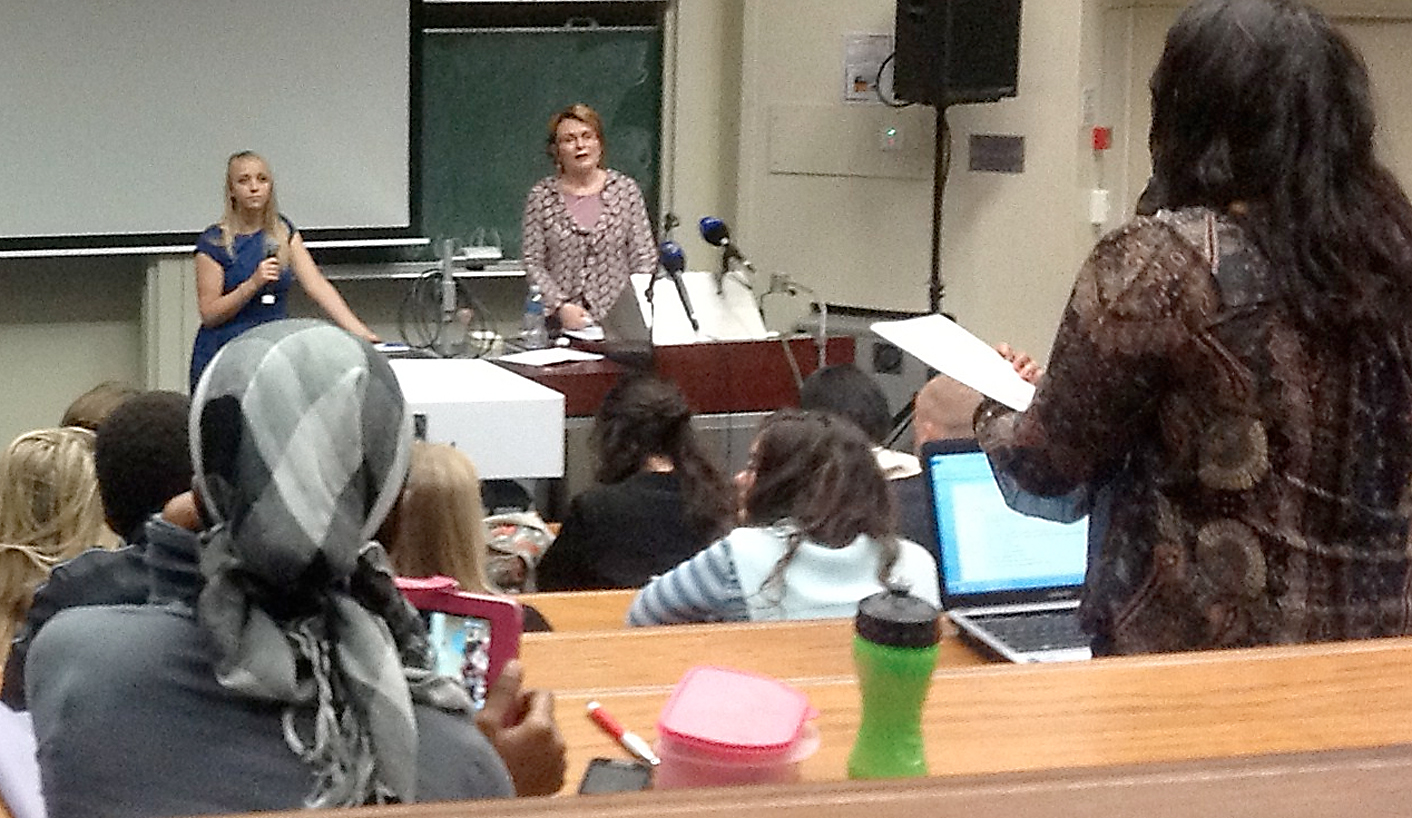 Some commentators have cynically noted that events at Marikana and beyond may be a giant gift for the DA, in the way they are exposing grassroots disenchantment with the ruling party. But it’s business as usual for the opposition, who have been getting on with what could be a very effective campaigning stint nationally. By REBECCA DAVIS.

With media attention firmly fixed on the mining labour disputes and the COSATU national congress, it may have escaped your attention that the DA has had a decidedly busy time of it over the past two months, touring the country to publicise their Growth and Jobs campaign. The Daily Maverick profiled the policy document at the end of July, noting that its key aims were to make the economy a talking point above race, and to tackle unemployment through economic growth.

To get the ideas contained in the policy out to the public, the DA top brass have been quite literally touring the streets: a fortnight ago, national spokesman Mmusi Maimane spent the day cruising around Alexandra in a “Jobs Taxi”, talking to residents about issues around unemployment. The aim, he told The Sowetan, was to “create a dialogue between us and the people on the ground”, a group he characterised as the “usually neglected class of the country”.

But another demographic the DA seems to be focusing on heavily of late is the youth – cannily, no doubt, as the party’s message of non-racialism probably has the best chance of succeeding among well-heeled “born-frees”. Key to their mission in this regard has been their Obama-esque use of social media platforms, one area in which they remain streets ahead of the ANC. As an illustration, August saw the launch of “Blue, the network”: an initiative which is “part leadership academy and part social network”, aimed at young professionals, and with the tagline “politics unusual”.

Among the more intriguing features of the project is the chance for members to throw a “Blue Plate Dinner”, where the DA promises to send you a “Public Representative” to join your dinner party and raise the tone of your usual meal-time chatter by answering your burning questions about DA strategy. Exactly how high-ranking this representative would be is unspecified, but they coquettishly suggest: “Who knows, you may be entertaining Lindiwe Mazibuko at your next get-together”. Imagine the Facebook photos!

It’s now SRC election season at a number of South African universities, and the DA has been all over it. A victory for DASO, the DA Student’s Organisation, at a particular university may seem like small fry for the DA to concern itself with, but there are indications that the party views these performances as a litmus test for the region in question more broadly. At this time last year, DA’s Eastern Cape Provincial Legislature leader Bobby Stevenson told the Daily Maverick that Daso’s performance in the province was important because “in Cape Town, the DA won at the University of Cape Town first before it took the city”.

He made the comment after Daso won a victory hailed by the DA as “historic” on the Nelson Mandela Metropolitan University (NMMU) campus last year, unseating SASCO after eight years in power on the SRC. This year, the DA will be hoping for the same performance at NMMU, with that university seen as particularly critical because the Nelson Mandela Bay Metro has witnessed a significant reduction in ANC support over the past few years. It’s an indication of the importance being ascribed to the election result that Helen Zille, Mmusi Maimane and DA parliamentary leader Lindiwe Mazibuko have all visited the university over the past three weeks to throw their support behind DASO.

All three, in their addresses, were keen to highlight the successes of DASO on the NNMU campus in improving conditions particularly for poor students: notably, clearing the student debts of students with access to financial aid, and introducing an SRC Bailout Fund for students who do not have access to financial aid. They were equally set on suggesting that the youth vote at SRC elections has a wider significance. Maimane summed up the belief in this regard at his address last Thursday: “We cannot arrive at national elections and hope [democracy] will all work there, while it is not working on other structures. So universities become key points to show us that young people, who are a key constituency in the country, symbolise for us as a country that we can be able to entrench democracy.”

On Tuesday, it was UCT’s turn for some DA loving, with Helen Zille arriving to address students during their lunch break on the eve of the SRC elections. There were DASO T-shirts aplenty in evidence, with blue candyfloss distributed to students outside the lecture hall. Zille’s talk was titled “Education as a form of redress”, and dwelled mainly on the DA’s identification of the “simple truth” that “if we want to change South Africa and create more jobs, we must fix education”. It’s an issue close to Zille’s heart as the former Education MEC of the Western Cape: in her public addresses, she draws frequently on her experiences in that role.

Her years in the Education MEC seat seem in particular to have left her with little love for SADTU: she slammed the “monopoly power that the ironically-named South African Democratic Teachers Union exercises over the system”. She said that South Africa’s “dominant union” doctrine, which holds that whichever union represents more than 50% of workers in a sector becomes the only recognised union, was “absurd”, and quoted former Anglo-American CEO Bobby Godsell as saying that the dominant union doctrine may have had a role to play in events at Marikana.

Ultimately, she said, money is not the magic key to transform the education system, though obviously it is a necessary component. “The DA already has hard evidence of what works,” she said. “More time in the classroom, working through the core curriculum, with a good textbook in each subject, a focus on literacy and numeracy, and good teachers who are well prepared and on time.”

When it came to question time from the students, the burning issues were revealed to be largely related to the youth wage subsidy, and race-based entrance requirements for university. With regards to the former, Zille pointed out that the DA had been proposing the idea in one form or another for around 15 years. In response to a question from a concerned student, Zille said there was no evidence that the youth wage subsidy would displace older workers (as Cosatu has claimed), but she seemed resigned to the fact that there would be no movement on the issue until after Mangaung: “While the ANC is being held to ransom, no bold policy initiative can succeed.”

When the question of race-based criteria for admission to South African universities was raised, Zille repeated the line favoured by DASO: that race criteria should be swapped for factors like students’ school background and socio-economic status. Calling race a “very blunt instrument” for determining who should be admitted to university, she said that the children of the very richest South Africans should not be “given advantages because of a melanin disparity”. DASO suggested in March this year that some replacement criteria for diagnosing “disadvantage” could include assessing candidates’ parents’ salaries and their parents’ level of education.

Last year, SASCO won the most seats in UCT’s SRC elections after three years of DASO control. The DA will likely have a close eye on this year’s results. At the university on Tuesday, Zille repeated a claim she has made before: that the DA will govern South Africa by 2019. For that to happen, the party needs to catch its voters young, and keep them. DM