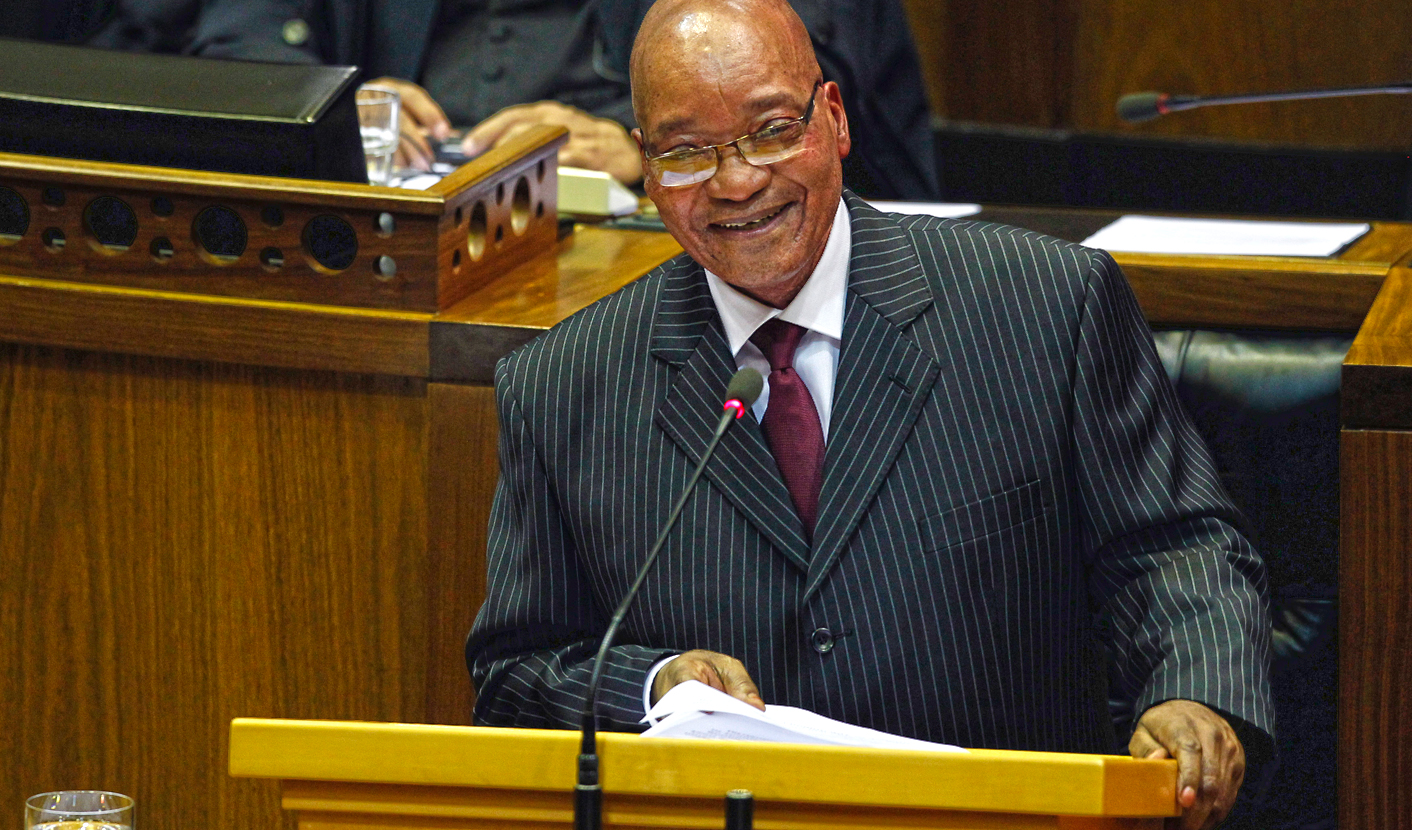 There was a time when Jacob Zuma got by with dodging serious issues and refusing to stand accountable. But the country is now lurching from one crisis to another, and South Africa needs a president who can show real leadership. Zuma had the chance to do in Parliament on Thursday; possibly the only thing of significance he said in two hours was a hint that the state could soon act against Julius Malema. By RANJENI MUNUSAMY.

It was always going to be a testing question and answer session in Parliament for President Jacob Zuma on Thursday. The country is going through a difficult period with upheavals and intensive strike actions spreading in the mining industry, the mainstay of South Africa’s economy.

On Wednesday the country was placed on high alert with expectations of a military coup d’etat around a meeting expelled ANC Youth League leader Julius Malema held with a small group of soldiers. This turned out to be an embarrassing overreaction by government with no explanation forthcoming of what intelligence it had acted on.

The Limpopo textbook saga and the Marikana massacre were two major crises this year and any president who had such things happen on their watch would feel the pressure when having to face the opposition – particularly considering that his leadership is under scrutiny in his own party with the ANC election season officially opening in two weeks. But it is the multiplying strike action in the platinum and gold mining industry that is shaking the country, which nobody seems to know how to deal with.

But you wouldn’t tell from Zuma’s demeanour and responses in Parliament on Thursday that he appreciated the extent of the country’s crisis, or that it bothered him in the least. He was his usual giggly self, manoeuvring around contentious issues and washing his hands of responsibility for any of the many things that went awry.

While the question session in Parliament was possibly a good opportunity to take the country into his confidence and reassure South Africans that the person in charge was on top of events, Zuma’s strategy was simply to bat away controversies and tease the opposition. Zuma stood at the podium for over two hours, during which time opposition MPs had to force answers out of him amid howling from both sides of the House.

The only time Zuma appeared rankled was when he was interrogated about a R2-billion development project at Nkandla in KwaZulu-Natal, three kilometres from his homestead. Zuma denied that he had instructed ministers in his Cabinet to finance the development of the Nkandla-Mlalazi Smart Growth Centre, but said the Department of Rural Development and Land Reform was supporting it.

He said Nkandla was not the only district receiving attention for rural development, as there were 23 districts identified by government for interventions “due to deep levels of poverty, scientifically established through thorough investigation”.

Zuma showed his irritation when Democratic Alliance parliamentary leader Lindiwe Mazibuko asked how he could justify the money being spent so close to his home when other areas within a 100km radius were without basic necessities. The development, which is linked to a rural development organisation that Zuma chairs, has given rise to a new town, now dubbed “Zumaville”.

Zuma said he saw no reason why Nkandla should be “punished” because he happened to come from there. “Should they be punished because they are neighbours to Zuma? I don’t think that is the correct approach,” he said. “Developing that area does not trouble me; it makes me very proud.”

On the issue of Marikana massacre, Zuma said the terms of reference for the commission of inquiry into the matter had finally been gazetted, but work was still ongoing to sort out the logistical arrangements. He said the mining sector provided half a million direct jobs and a similar number of indirect jobs, and that government, labour, business, political parties and all stakeholders should work together to promote adherence to the Constitution and laws of the land in dealing with labour disputes.

“The worker demands for better wages can and should be addressed within the country’s labour relations framework. The illegal strikes, the incitement and intimidation will not assist workers. Instead, it will make them and the country worse off,” Zuma said.

Asked by Cope MP Papi Kganare what he planned to do about “the uncontrollable Polokwane political Frankenstein, Malema, created by yourself”, Zuma laughed, and said he had created no such person. “I shouldn’t be blamed for somebody who has some characteristic of his own. It’s not my fault. I never participated in the production of such a person,” Zuma said.

Zuma ignored Kganare’s question about whether the country was under a security threat and why its military had been placed on high alert.

IFP MP Eric Lucas asked Zuma how his office intended to stabilise unrest and deal with growing tension, to which he responded that there were “activities that are not acceptable” and he had engaged with his ministers on how to act.

In a transparent but vague reference to Malema, Zuma said: “It is also some people of some description who are going there to instigate miners to operate in a particular way. It cannot be accepted. And therefore we are looking into that; we are going to be acting very soon.”

Mazibuko asked if Zuma would consider changes to the labour relations regime, which pegged the union representation threshold at 51%. She said this had led to the situation where Amcu (the Association of Mineworkers and Construction Union) was not a recognised union at the Lonmin platinum mine, while “the ANC-affiliated National Union of Mineworkers” was able to establish a monopoly.

Zuma said workers and employers had negotiations and agreements, and that those should be respected. “In a democratic situation, it is the majority that prevails. I can’t change the rules because you want to make a particular point… You have more rights because you’re a majority; you have less rights because you’re a minority. That’s how democracy works,” he said, to howls of protest from the opposition benches.

Zuma refused to delve into the Marikana issue, saying that MPs should await the findings of the commission of inquiry. But the matter was repeatedly raised, including in the context of questions on the militarisation of police ranks and the use of force by the Technical Reaction Team. Zuma said the change in police ranks was intended to send a message to criminals that government was getting tough on crime.

But Cope MP Leonard Ramatlakane said the militarisation of the police was a “slow walk back to Vlakplaas” (where police death squads operated during the Apartheid era) and had resulted in the Marikana massacre and the Cato Manor hitsquad. Zuma said this was an “exaggeration of facts” and that people had died in police operations before the ranks had changed.

Zuma was quizzed by MPs on the shocking ranking of South Africa’s education system by the World Economic Forum as 140th out of 144 countries, to which he responded that this was not a fair comparison as other countries had not experienced Apartheid. Cope MP Willie Madisha told Zuma that even high-ranking ANC members such as Winnie Madikizela-Mandela and Pallo Jordan had admitted that the education system was now worse than during Apartheid. He said issues like the non-delivery of textbooks were affecting the poorest of the poor, and that they could not be lifted out of poverty without proper education.

Madisha alleged that there appeared to be a “deliberate strategy” to keep SA uneducated so that more people would be unemployed and dependent on social grants, and would therefore keep voting ANC. He repeated calls for Zuma to fire Basic Education Minister Angie Motshekga.

Zuma claimed that South Africans were happy with the education system because they knew it was government’s priority. He said South Africa now had more people at school than during Apartheid and “more and better facilities at schools”. On the Limpopo textbooks issue, Zuma said he had received a report from the presidential task team. “I am considering the report and will indicate the way forward in due course.”

On the issue of special remission of sentences and pardons granted by Zuma in April, he said according to preliminary statistics, 114 people out of the 45,033 persons who were released committed crimes and were re-arrested. Mazibuko asked what criteria had been used to release the prisoners, as this appeared to be a “serious mistake” given the brutality of crimes some committed after their release, including the rape of elderly women. She called on Zuma to apologise to those brutally affected by his decision.

Zuma refused, saying it was not written on people’s foreheads who would go out of prison and recommit crime. He said while he sympathised with those affected, he would not apologise for releasing the prisoners as he was legally and constitutionally allowed to do so.

If there was anyone who looked to Parliament on Thursday to see how the captain of SAS South Africa was steering the ship out of troubled waters, they would have been horribly disappointed. South Africa has gone from a president who was in denial about its crises to one who chuckles at them. Tragically, though, South Africa’s crisis of leadership is no laughing matter. DM