Malema and the soldiers: Military misfits embrace the ANC misfit 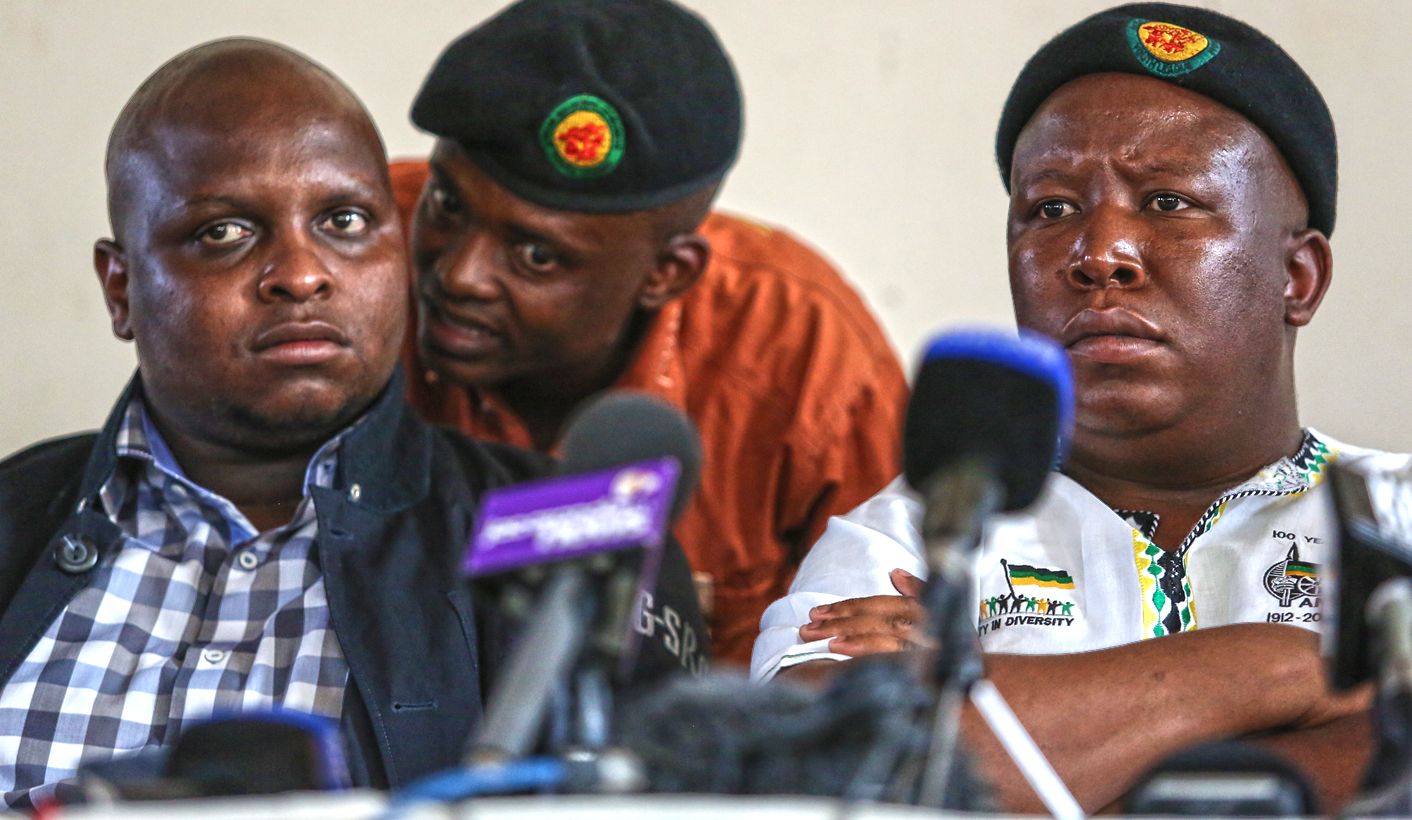 If it was not clear what Julius Malema is up to these days, it is now. Disgruntled with your employer and your union? Give him a call and he’ll show up with a phalanx of reporters. He has every intention of irritating those who threw him out of the ANC, and the sudden coalescing of worker dissatisfaction is the perfect tool. By SIPHO HLONGWANE.

There is plenty of value in campaigning vigorously even if no leadership bid is planned. The people who tend to do this have recently lost some grasp on some kind of power and are making sure that the public won’t forget them soon. They tour the country, sympathising with those who are unhappy with the person that beat them to power. It’s a two-fold relationship, then: the people get to feel like someone cares, and the campaigner gains a sure following.

Sarah Palin did it in 2011. After John McCain unleashed her upon an unsuspecting America, and subsequently lost – she turned out to be liability – she decided to tour the country in a bus, visiting “historical sites”, shaking hands and kissing babies. The timing of the tour made it seem like she was angling to be the Republican candidate in 2012, but it was not to be so. She cancelled the tour and returned home when it became clear that the American people had largely seen enough of her.

Expelled ANC Youth League president Julius Malema is doing it too. He’s been to Marikana, the Grootvlei gold mine on the East Rand and Gold Fields’ Westonaria plant. On Wednesday, he was in Lenasia, near Soweto, to speak to some soldiers who apparently invited him to the military base there.

The decision triggered a near-hysterical reaction from the defence minister Nosiviwe Mapisa-Nqakula, who accused Malema of mobilising against the state. The military was placed on high alert as “ill-discipline in the military is a direct threat to the country”.

“Any member who participates in such a meeting without proper permission will be subjected to the disciplinary code of the SANDF,” she said. And no soldiers were given permission to attend.

As it turned out, she needn’t have worried. About 100 soldiers gathered off base in a hall, and all of them wearing civilian clothing. These were not serving soldiers, we discovered, but were on special leave following a lengthy court battle sparked in 2009 when they staged a march to the Union Buildings which quickly turned into a riot. The military sacked the lot, but they managed to obtain a court order overturning the ruling. To complicate matters further, the soldiers refused to return to work when General Solly Shoke (SANDF chief of staff) ordered them to do so after they discovered that a wage deal had been negotiated in their absence.

Some of the soldiers have now been called to military courts to face charges of disobeying a lawful command after the Supreme Court of Appeal ruled in favour of the defence department.

The intricacies of this case didn’t deter Malema in the least. He compared the fight of the soldiers to that Chris Hani and Steve Biko.

He said that the government was ignoring the court order as part of a trend of doing so. He referred to the court interdict obtained by the Democratic Alliance compelling the National Prosecuting Authority to hand over the Zuma spy tapes that led to corruption charges being dropped against him – one which the NPA has failed to comply with yet.

“We don’t like the DA, we don’t like Helen Zille. But she has won a court case which gave them 14 days. Now [it’s] almost a year and they are not complying with that court order,” Malema said.

He repeated his claim that President Jacob Zuma is a dictator, saying that his own expulsion from the ANC was predetermined, as were the pending military cases.

Predictably, the audience laughed uproariously at this one.

“Here, children don’t have books, people in hospitals don’t have the necessary machines, they don’t have roads or clean water.”

The decision to put the army on high alert was the same panic showed by the police on 16 August when they shot 112 miners, the former ANCYL president said. Malema’s public appearances over the past few months have been to places of great disgruntlement, where there is an apparent leadership vacuum. It gives him the opportunity to align his own interests with those that he finds on the ground by railing against the government. Fortunately for him, there is plenty of uproar in the country these weeks and from Marikana to the gold mines, the political response has been poor.

The 34 deaths on 16 August embittered the striking miners and gave them cause to spread their strike as far and wide as possible. Others, in the East and West Rands, are springing up more spontaneously.

What the ANC probably did not count on when it expelled Malema was that he would find plenty of willing ears in the public. The fact that the bubbling anger is also pointed at affiliates of Cosatu, like the National Union of Mineworkers (NUM) in places, means that by inserting himself into these disputes, he is stirring both the ANC and its biggest ally Cosatu.

Malema would not have had this opportunity if the situation on the ground was a lot calmer. Despite their many accusations against the generals in the army, the suspended soldiers themselves are not helpless victims – but they too fall into a general pattern of unhappiness that shows itself across the country. In the mines, NUM’s membership is reportedly slipping fast, which allows new unions to assert themselves quickly by taking up members among the unrepresented. Malema didn’t cause that.

Without addressing the underlying causes of the strikes, marches and riots – let’s not forget the service delivery protests in the townships and squatter camps around Johannesburg – will continue to be a ripe ground for Malema’s march forward. DM