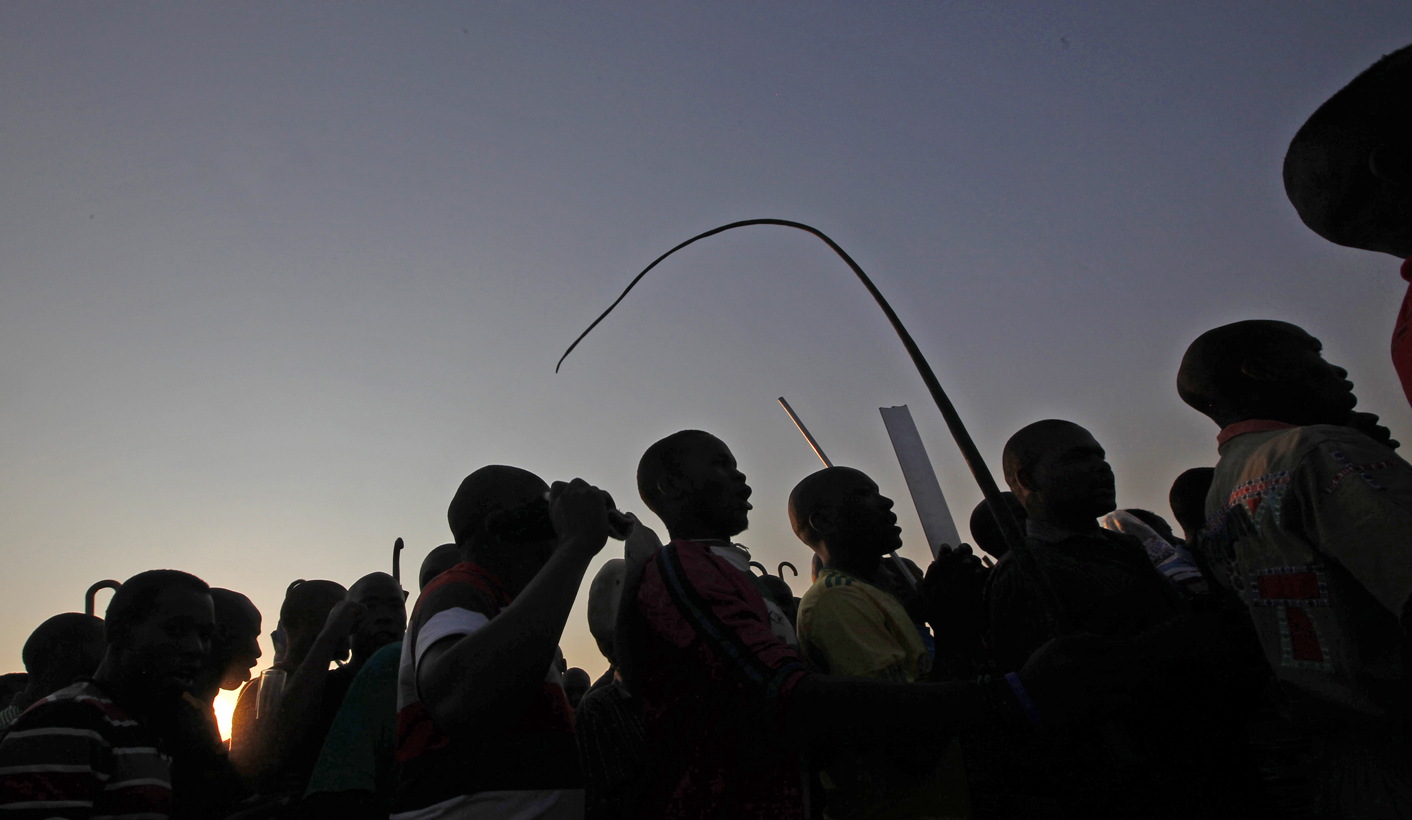 Off on various errands related to their latest troubles or just sitting in the sun, the employees of Lonmin are just not showing up for work. While the company is spinning furiously to allay fears of imminent collapse, there’s the fact that only 6.5% of staff showed up for work on Monday. That’s counting all Marikana shafts. By SIPHO HLONGWANE.

Lonmin PLC apparently hires 28,000 people in its Bushveld Complex operations. In August, some 3,000 unskilled and semi-skilled miners went on strike, led by an even smaller group of rock drill operators, mostly from the rural parts of the Eastern Cape. Yet since the police shot 112 miners, killing 34 and wounding 78, no more than 25% of workers have been showing up.

On Tuesday, the figure slid down at 6.5% at all shafts. That would include all the Marikana operations: Westerns, Karee, Middelkraal and Easterns (which includes a joint-venture with Anglo Platinum).

The small group of men that caused the company so much trouble were scattered all over the place on Monday – some were at the Wonderkop squatter camp near the town of Marikana, some were reportedly on their way to a police station in Brits to do an identity parade as part of an investigation by the Independent Police Investigative Directorate (IPID) and about 108 of them were still in prison, awaiting the National Prosecuting Authority to sort its paperwork out, confirm their addresses and then truck them to the Ga-Rankuwa Magistrates Court so they could be set free.

What the rest of the absentee workers were up to wasn’t clear at first, until news arrived that there was some kind of a strike going on at Eastern Platinum, another Lonmin operation not far from Marikana. A security guard mounting a road block outside the entrance to that particular area refused us entry without Lonmin’s permission first, but confirmed that “something” was going on there. As it turned out, it was a relatively gentle affair, with a few people marching around inside the premises and then dispersing under the beady eye of the police.

At Brits, the identity parade was also suddenly postponed to some unnamed date, as the complainants had not sorted out their transport or arranged for their lawyers to be there.

There were only a tiny number of men back at Marikana in the afternoon, hardly enough to qualify as a crowd of any sort, who said that everyone had left and would return in the morrow.

Those who had not gone to work were content to just stay home, it seemed, unless they were still in the clutches of the less-friendly government service providers.

The 6.5% attendance figures for Lonmin seemed alarmingly low, especially for a company that has said failure to meet its production targets in the crucial third quarter might warrant a meeting with the bank manager, hat in hand.

On 21 August, the company issued this phlegmatic statement: “In view of the lost days of mined production and the resulting lost revenue, the company has been closely monitoring the position in relation to the terms of its existing bank debt facilities. Whilst there is still some time before the covenant compliance is tested, the Company now considers that the balance of probabilities is that the impact on production of the current events will result in covenants being breached at the next test date on 30 September 2012.  Consequently, constructive discussions are now taking place with Lonmin’s banking group to address this potential situation.”

On Tuesday, Business Report said some analysts believed the company would have to resume production by Friday or shut its facilities down.

“Lonmin management have to make a decision in 30 days or a decision is going to be made for them. The banks are going to cut credit by the end of the month,” Peter Major of Cadiz Corporate Solutions said to the paper.

“If the mine does not become operational soon, we will have to make some decisions,” was the cryptic reply from Lonmin spokeswoman Sue Vey.

Though the company also said that no one who survived the shootings would be fired, a prolonged strike threatened up to 40,000 jobs.

For their part, the striking miners seem in no hurry to return to work. The R12,500 net pay demand still stands, and a big meeting was planned for Wednesday at 07:00. The strike continues. DM