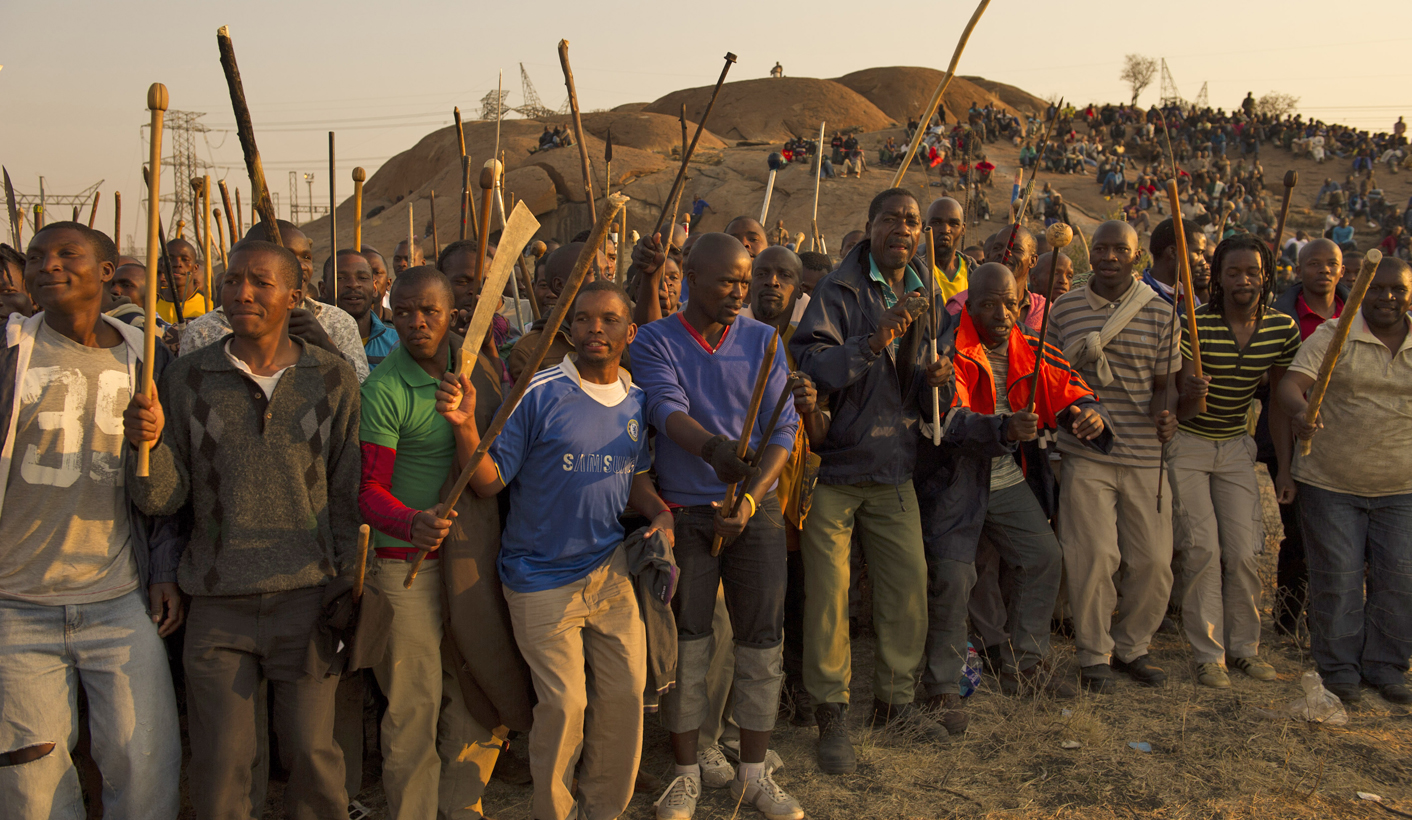 Attempts to spark talks between two warring mines unions and the platinum company Lonmin stalled Monday after an armed crowd refused to let Num’s president speak. Even rival Amcu’s leadership is failing to get a grip on the situation. For now, police and deployed troops are the difference between peace and a full-blown battle. By SIPHO HLONGWANE.

It is still not exactly clear what sparked the violent clashes at Lonmin’s Marikana mine in the Northwest last Friday. Depending on whom you ask, the deadly brawl was incited by the way Lonmin went about trying to quell a driller’s strike, by the newly formed and apparently militant Association of Mineworkers and Construction Union (Amcu) or by the National Union of Mineworkers (Num). What is clear is that on Wednesday nobody could present a solution to the stalemate that has seen large groups of Amcu-aligned workers held off from Num’s people by a large contingent of heavily-armed police officers, security guards and deployed defence force troops.

By Monday, 10 people had died from the violence, including two police officers. A large crowd of miners, reportedly led by rock drill operators (RDOs), gathered on a hill near the Marikana mine over the weekend and was still there on Wednesday.

Num President Senzeni Zokwana was at the mine Wednesday to try talking to the miners, but was not allowed to speak. According to Amcu General Secretary Jeffrey Mphahlele, the people believe it was Num who perpetrated Friday’s violence. “When the Num leadership arrived at Lonmin and tried to talk, the people rejected them because they claim that it was Num who shot at them on Friday,” he said.

Mphahlele said the source of the trouble is the Lonmin’s failure to follow proper bargaining protocol by agreeing to negotiate directly with one of three RDO units to negotiate the demands. When the company was unwilling to meet the 312.5% pay hike demand, the unit then called upon the other two and they embarked on the violent strike.

“It was the blunder of the company to negotiate with individual people outside of union structures that (worsened) the situation. Those people who were negotiated with are now holding ground and making those high demands. At this stage, it is just a matter of faith that things will calm down,” the Amcu general secretary said.

Mphahlele said Lonmin had failed to show up to a Wednesday meeting called by the police to try and break the deadlock. In the late afternoon, when Daily Maverick spoke to him, he said the union was trying to get some common ground with the RDO leaders so negotiations with the platinum company could continue peacefully.

According to Reuters, Amcu has claimed 23% of Lonmin’s 28,000 employees as members.

“The world’s No. 3 platinum producer Lonmin has been forced to freeze mining at its South African operations after violence between rival unions killed at least nine people,” Reuters reported Tuesday. “Lonmin, already struggling with low prices and weak demand, may miss its annual production target of 750,000 ounces as the quarter to the end of September is typically its best. Its share price fell more than 4% in London and Johannesburg.”

Daluvuyo Bongo, the local secretary for Num, described the atmosphere Wednesday as fraught with promise of more violence. He said in the afternoon that Num’s president was still in meetings with the rival union and the police. He himself, having faced numerous threats to his life, is not at the mine.

“The situation is still very tense,” Bongo said. “The police and soldiers have put up a net on the mountain to separate Num and Amcu.”

According to Bongo, the belligerent and militant factions of protesting workers are all aligned to Amcu. (Over the weekend, both unions placed blame on each other for the violence.) He said if the company did not find a way to get through to the RDO leaders somehow, the angry crowd would eventually turn on the police and soldiers, no matter how heavily armed they were.

Neither Amcu nor Num leaders expressed confidence that the situation would calm down easily, or even soon. Startlingly, both gave the impression that their respective unions were tiptoeing around the very angry drillers, with only Amcu reaching any sort of accord with them. For now, the situation is beyond either union’s control.

Bongo said the lesson that violence as a tactic when negotiating for higher wages was learned at the nearby Impala Platinum mine, where drillers managed to drive their wages up to R9,000  from R4,000 a month. The Lonmin workers are now trying the same trick, except with their demands now placed at R12,500 per month. The Implats operation has also been the site of a vicious dispute between Num and Amcu, which declared it had replaced Num as the official workers’ representative in June.

Num has an even bigger worry than the potential loss of membership fees from diminishing numbers in platinum mines. At 330,000 members, it is the biggest affiliate of the Congress of South Africa Trade Unions (Cosatu) and is locked in a battle with the slightly smaller metalworkers’ union (Numsa) for the control of the federation’s economic outlook. If the non-aligned Amcu does a good enough job of kicking Num out of the platinum mines, it may shake the foundations of South Africa’s politics to the core as Cosatu changes to adopt the more hardline stance of Numsa as Num diminishes. DM

Photo: Lonmin employees gather on a hill called Wonderkop at Marikana, outside Rustenburg in the North West Province of South Africa August 15. Ten people, including 2 policemen have been killed in a week of violent clashes. (Greg Marinovich/Daily Maverick)