Move to dislodge Vavi may fire back at Zuma

Move to dislodge Vavi may fire back at Zuma 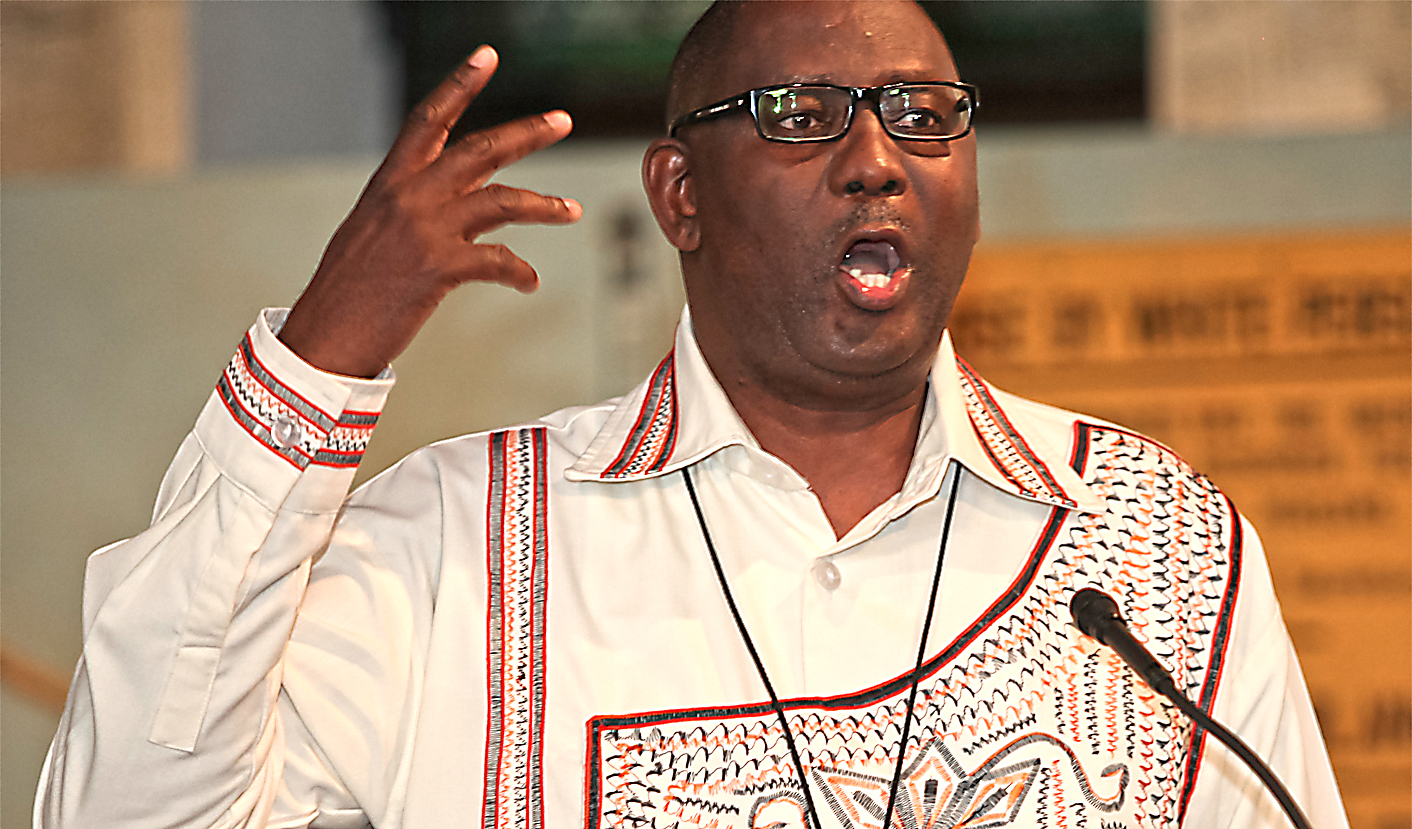 Reports that President Jacob Zuma’s allies are gunning for Cosatu General Secretary Zwelinzima Vavi is testament that there is no safe haven to survive the factional battles ahead of the ANC’s December conference. Whether you declare upfront that you do not want a top position or “do a Tokyo” and run a public campaign, the Mangaung Monster will gobble up everyone in its path. But Vavi may still have the last laugh. By RANJENI MUNUSAMY.

If there was anyone in the Tripartite Alliance who looked like they might come out of the ANC’s 53rd National Conference in Mangaung unscathed, it was Cosatu General Secretary Zwelinzima Vavi. He seemed to have decided his game plan long ago: remain the Cosatu boss to prevent the trade union federation from undergoing a nasty leadership battle for his post and declare he did not want a position in the ANC national executive committee (NEC).

But you know what they say about the best-laid plans…

The Mail & Guardian reported that plans are underfoot to put up a challenger against Vavi at the Cosatu National Congress next month. It said senior leaders of Cosatu affiliates and from the South African Communist Party have held behind-the-scenes meetings recently to discuss a strategy to remove Vavi.

The name being touted as an alternative to Vavi is Fikile Majola, general secretary of the National Education, Health and Allied Workers’ Union (Nehawu). There is one reason, and one reason alone, that Majola would make a last-minute run for the post: to deliver Cosatu as a bloc behind President Jacob Zuma’s campaign for a second term at Mangaung, an idea Vavi balks at.

Vavi was one of the champions for Zuma’s election at Polokwane in 2007 and threw the weight of his 2-million strong trade union federation behind the campaign. During Zuma’s criminal trials and in the run up to the Polokwane conference, Vavi worked hard to keep Cosatu united behind Zuma, even fighting off the federation’s previous president, Willie Madisha, who supported former President Thabo Mbeki.

But soon after Zuma assumed power, Vavi became disenchanted with the new president’s behaviour and weak leadership. He has become a vocal critic against the government, particularly on issues of corruption. Under his direction, Cosatu stated it is refraining from naming a preferred candidate for the position of ANC president.

While Vavi, who has held the position of Cosatu general secretary since 1998, initially stated that he would step down at this year’s congress to make way for new blood, he changed his mind when it became clear that there was no obvious successor. The two people mentioned as possible candidates were Majola and Irvin Jim, general secretary of the National Union of Metalworkers of South Africa.

Because of the unlikelihood of reaching consensus on either candidate, and in order to prevent Cosatu being divided by a leadership battle, Vavi decided he would stay on as general secretary for a fifth term at next month’s congress. He has also stated he does not wish to serve in any leadership position in the ANC and wants to focus all his attention on Cosatu.

However, his reluctance to get Cosatu behind Zuma’s bid for re-election and perceived close relationship with Jim, who is openly advocating for leadership change at Mangaung, has triggered an underhand campaign to remove him and replace him with Majola, a close Zuma ally.

If the Cosatu congress is forced into a vote over the general secretary position, the situation could get dicey for Vavi. Among those backing Zuma’s second term bid are Cosatu President Sdumo Dlamini, the powerful National Union of Mineworkers (NUM), led by General Secretary Frans Baleni, and Nehawu.

They are being pushed to challenge Vavi by SACP General Secretary Blade Nzimande, who has fallen out with the Cosatu general secretary. Their relationship soured when Vavi slammed Nzimande’s purchase of a 7-series BMW on the government tab and became critical of the SACP leader’s neglect of his party position, intimating that Nzimande should resign from Cabinet. Nzimande is one of the key proponents for Zuma’s second term bid.

NUM is Cosatu’s biggest affiliate and highly influential in the trade union federation. The Sunday Independent reported that NUM and Cosatu leaders had a tense bilateral meeting last week, at which the mineworkers union was highly critical of Vavi’s leadership. Vavi was accused of fomenting divisions in the federation and his indirect business interests, through his wife Noluthando, were also raised, the paper stated.

NUM apparently also reprimanded Vavi for first unilaterally deciding to step down as general secretary and then later recanting without discussing the matter internally.

Vavi told the Independent that details of the closed meeting were leaked to “assassinate my character” and was an attempt to “tarnish my standing among workers on the eve of Cosatu’s congress”.

If NUM and Nehawu, the third biggest union after Numsa, get behind Majola, the Cosatu congress could become highly divisive and could cause further instability in the alliance ahead of the Mangaung conference.

Vavi’s political report to the Cosatu congress, in which he motivated against supporting ANC leaders without set conditions, is also likely to be hotly debated at next month’s meeting. According to a draft version of the report, which has been leaked, Vavi said Cosatu should avoid the “danger” of supporting ANC leaders who it won’t be able to hold to account later.

“The congress need to address the risk of us repeating history by basing our actions purely on trust,” the Sunday Times quoted the report saying.

In the report, Vavi is highly critical of factionalism, patronage and corruption in the ANC.

“In our view, a multiple crisis emerging in our society, which, if not addressed, has the potential to result in an organisational implosion and social explosion which could reverse our democracy.

“These trends are part of a general crisis of failing to act decisively on a broad range of issues, as a result of divisions in the movement and the paralysis in the state,” Vavi wrote.

According to the Sunday Times, Vavi acknowledged that Cosatu is divided over how to deal with the problems in the ANC and government.

“Perceptions are setting in that some union leaders are reluctant to take up certain issues for fear of embarrassing the ANC,” Vavi says in the report.

Despite the prospect of a last minute challenge against Vavi, it is unlikely to succeed in dislodging him. However, in the interests of preserving Cosatu’s internal cohesion and knowing his every move is under scrutiny by his detractors, Vavi is likely to be more circumspect in his public statements.

But with his penchant to call it like it is he is unlikely to be on mute mode for long. If he does retain his position in Cosatu, he will continue to keep the spotlight on the ANC and government.

What his detractors may not be considering is that if Vavi is not re-elected as Cosatu general secretary, he will be free to stand for a leadership position in the ANC. His inclusion on an anti-Zuma slate for one of the top six positions in the ANC could provide more trouble for the incumbent’s camp and consolidate Deputy President Kgalema Motlanthe’s ticket.

Vavi hails from the Eastern Cape, which is now a battlefield province divided between the Zuma and Motlanthe camps. If Vavi is booted out of Cosatu but ends up on Motlanthe’s ticket at Mangaung, he could tip the Eastern Cape in their favour. His popularity in the movement means he would also draw support from other provinces and the ANC Youth League.

The Zuma camp would therefore need to consider carefully whether kicking Vavi out of Cosatu would be a worthwhile gamble. It could be a move that backfires horribly come December. DM