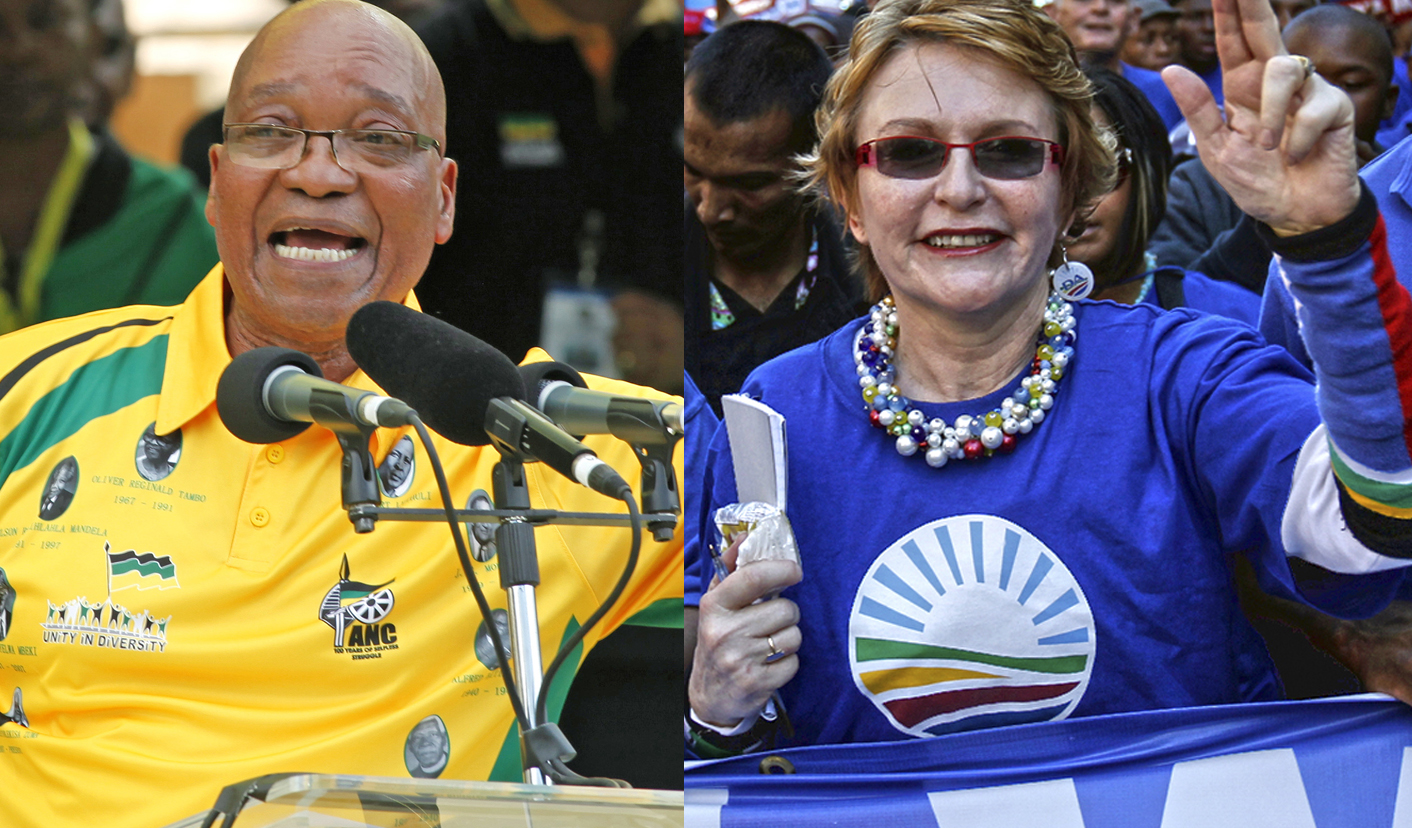 If President Jacob Zuma retains the presidency of the ANC at the party’s national conference in December, South Africa is in for the mother of all election battles in 2014. The Democratic Alliance is already gearing up for a full-throttle election campaign, which will play on the full range of the ANC’s weaknesses and failings. By RANJENI MUNUSAMY.

Election strategies in modern democracies are often a gamble because they sometimes develop a life of their own along the way or veer off course due to the impact of current events. What is carefully mapped out at party headquarters rarely goes according to plan as the campaign trail is impacted upon by day-to-day events, the behaviour of the candidates and audience reception.

The US presidential electoral system has the highest budget, most intensive mass media campaign and is primarily personality-driven. Full-time campaign teams shadow the candidates along the trail, adapting the schedule, speeches and messaging according to what’s happening around them and the global news agenda. Candidates have to react on the trot to issues in the news and what the opposition is doing and saying. It is as dynamic as an election campaign can get.

South Africa’s election campaigns are relatively staid affairs by comparison. Apart from the incorporation of social media and television advertising recently, the campaigns so far have been static and messaging remains consistent with what is contained in the party manifestos. If you listen to the speeches of the ruling party and the opposition at the launch of their election campaigns, it is pretty much what you will hear throughout.

Though parties are naturally highly competitive on the trail, South Africa has yet to see a bruising electoral battle that genuinely tests the support of the ruling party. The outcomes of the past eight elections – four national and four local government – have shown that, with the exception of the Western Cape and KwaZulu-Natal, the ANC’s credentials as the party of liberation and dominance in the political landscape is essentially what defines voting patterns.

However, as the memory of apartheid recedes and the configuration of the electorate changes through the introduction of new young voters and attrition, these patterns will change. The next general election in 2014 will for the first time include voters who were born after 1994 with no first-hand knowledge of statutory discrimination and whose only experience of the ANC is in government.

A large portion of this batch of new voters will also be in the higher education system or job seekers who will direct their votes according to which political party holds the best guarantee to incorporate them into the job market.

Based on this weekend’s launch of the Democratic Alliance’s economic policy plan for job creation and growth, it is clear that the party strategists are thinking ahead to the nature and essence of the 2014 election campaign. The party has set its sights on increasing support in its Western Cape home base and capturing other provinces such as Gauteng and the Northern Cape from the ANC.

The DA has decided to get out of the campaign starting blocks early, focusing on issues which the ANC has proved to be most vulnerable on: job creation and economic growth. The ANC is also caught in an economic policy conundrum with its various constituencies pulling and pushing in different directions, rendering government rudderless as a result.

The DA’s easiest target would be new voters with no emotional ties to the ANC and who would be willing to vest their vote with whichever political party rescues their generation from joblessness. It is therefore a masterstroke on the part of the DA to own and sell a jobs plan from now so that it claims whatever employment opportunities it generates – even under the ANC government – as its success.

The party is planning a nationwide roadshow to sell its jobs plan and is to flood the country with advertising material on various aspects of its proposals. The DA says it wants to raise the country’s growth rate to 8%; provide incentives to encourage the employment of young people through, among other things, a youth wage subsidy; and encourage the growth of small businesses through reduced regulation and red tape.

Though many of its proposals are already contained in government policy, the DA has the savvy to claim them as its own. Government, on the other hand, is stunted with the challenge of implementing all its promises and policy decisions.

With the ANC consumed with factional battles ahead of its elective conference in Mangaung in December, it is unable to compete with the official opposition’s campaign strategy anytime soon. It cannot even sell the outcomes of its policy conference with any certainty because much of it is still up for debate and has to be ratified by the national conference.

As the fallout between the ANC Youth League and its mother grows, the ruling party cannot as yet count on its youth wing to mobilise and rally young voters. If anything, the deepening rupture is likely to split its youth constituency.

In her speech launching the economic policy plan over the weekend, DA leader Helen Zille revealed a slight change in tactics in order to appeal to black voters. Instead of being on full attack mode against the ANC, there was an acknowledgment that the ruling party inherited a dysfunctional economic system, but that its failure was its inability to deal with it.

“If we want freedom to become a reality for all, we have to break down the big wall that stands between the insiders and the outsiders in our economy. It was not the present government that built this wall – it was the evil of apartheid that first divided South Africans and set up the system of insiders and outsiders.

“The freedom we won in 1994 was supposed to change all that. It was supposed to give all our people opportunity and access to proper education, to jobs and assets. But instead of breaking down that wall, it has just been getting higher and wider. The ANC government has been extending this wall. Together with their friends they have been dividing South Africa’s too small pie of wealth and jobs amongst themselves. They are satisfied with lower growth and fewer jobs – as long as they keep these to themselves.

“The ANC and its allies in some businesses and unions are shutting down your freedom,” Zille said.

She said the DA’s plan would change South Africa’s economy from a system of insiders and outsiders to one in which everyone can participate.

Who wouldn’t want that?

Of course, these were pretty much the same targets the ANC set out in its election manifesto in 2009 and which the Jacob Zuma administration has been struggling to get off the ground since then. As long as government remains moribund in its inability to implement policy decisions, the DA will pursue its roadshow, selling jobs as its flagship.

With their high-visibility campaign gaining momentum and younger voters already paying attention, the ANC is likely to have a rough ride trying to play catch-up to the DA while trying to sell a second term in government for the Zuma administration.

By the ANC’s own admission and as shown by the diagnostic report of the National Planning Commission, government is weak and is failing in its key target areas such as education, skills development and economic growth. It will be difficult for the party to convince its constituency that the Zuma government will pull off in a second term all the election promises it failed to fulfil in his first five years.

All indications are that the ANC is in for another massive factional showdown at its Mangaung national conference, which will again weaken its internal cohesion and result in a significant section of the party disenchanted by the outcome. So far, the 2014 election campaign appears to be the furthest thing from their minds as the factions battle for dominance.

But if the party is to retain its electoral dominance, its performance in government and its campaign strategy for 2014 should be at the top of its agenda. The DA could become a force to be reckoned with if the ANC does not make significant changes to the way it operates and does not recover ground in its key delivery areas.

A second term for Zuma would be manna from heaven for the DA’s campaign. A Jacob Zuma-Helen Zille face-off in 2014 is exactly what the opposition wants to finally break the ANC’s supremacy at the polls. DM

Photo: A collage of Reuters photographs