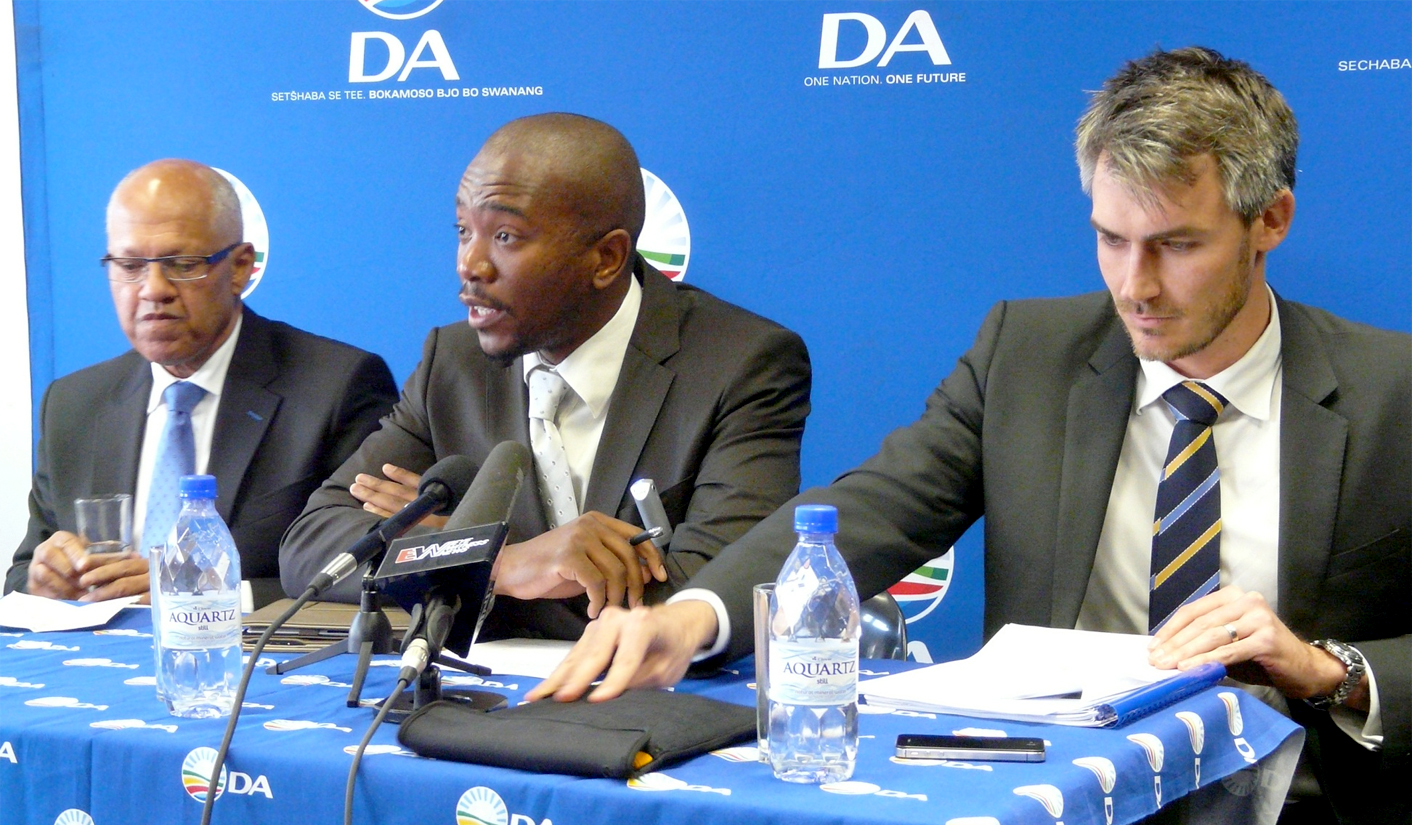 On Saturday, the Democratic Alliance will launch a big campaign to push its economic policies into the public sphere. Shadow finance minister Tim Harris, federal chairman Wilmot James and party spokesman Mmusi Maimane gave journalists a taste of what the document will contain at a press conference on Thursday. By SIPHO HLONGWANE.

The ANC inherited an exclusionary system of insiders and outsiders, and, instead of breaking it down, they have continued that ordering of society. Expect to hear this often over the next six weeks. It’s the message the DA will be taking across the country in its Jobs Campaign, which will provide an alternative economic policy.

On Thursday, shadow finance minister Tim Harris, federal chairman Wilmot James and party spokesman Mmusi Maimane gave some idea as to what the campaign plans for the country.

The policy document is called the DA’s Plan for Growth and Jobs, and its fundamental thrust is contained in its title – the party believes economic growth will drive up employment. It was developed by James, who took input and discussion from the party as well as outside experts like economist Greg Mills, Investec chief economist Brian Kantor, Mamphela Ramphele, Adcorp labour analyst Loane Sharp and former New Zealand finance minister Ruth Richardson.

The plan hopes to drive South Africa’s economic growth up into the 6-8% bracket from the 2-3% where it is now.

The five key themes of the document address both supply-side and demand-side constraints to the labour market. Lack of education and a youth wage subsidy are the supply-side interventions, while the numerous hurdles for small business starters, lack of infrastructure for growth and the tax regime as far as investment is concerned are the demand-side interventions proposed.

The party plans to spread the message via posters, pamphlets, billboards, an SMS campaign, social media and a grassroots campaign. Various party leaders will host events where they will showcase their policies, should they have the opportunity to govern nationally.

The plan will include large-scale apprenticeship programmes, opportunity vouchers for young people (which can be used either for study or as seed capital for small-scale entrepreneurship), a youth wage subsidy, a restructuring of the infrastructure spending plan (bigger and better), which will include private ownership schemes via listings, and reworking the industrial and economic zones policies to make them competitive and on a par with middle-income countries around the world.

The plan will also address South Africa’s labour market. The DA will propose to make it far more flexible and at the same time ask executives why it should only be workers who have to make all the concessions at the bargaining table as far as remuneration is concerned. The party took the plan to the Federation of Unions in South Africa, the second largest such organisation in the country. Cosatu, an ally of the governing party, will probably refuse to be consulted, said James.

Harris said the party did not actually have a problem with Cosatu, except that the federation abuses its privileged relationship with the ANC.

Though the document aims to give a picture of what the DA would do on the national stage, many of the policy points will be implemented in the Western Cape, the city of Cape Town and the 26 municipalities the DA currently governs – insofar as one can without the benefit of controlling monetary and economic policy, as well as the tax regime.

The masterstroke of the plan is the prominence given to the youth wage subsidy – which was implemented in the Western Cape in 2009 at a cost of about R9-million a year and has already benefited 2,500 young people – because it points to what broader gain the DA wants to achieve.

The subsidy is a strange beast. It never really got the attention of the country until Cosatu stonewalled on its implementation at the National Economic Development and Labour Council after the finance minister, Pravin Gordhan, announced it two years ago. The main champion of the subsidy these days is the DA, which agrees wholeheartedly with the finance ministry’s policy.

If the DA can show that the subsidy works without hitting unions where it really hurts (member fees), it will remove a factual incentive for Cosatu to racialise the economic plan. The opposition party will simply say: this was your ally’s idea.

On the sidelines of the press conference, Maimane said they had noticed that a lot of South Africans are clueless about macroeconomics and how it affects their daily lives. This is a campaign to take that message to the ground – imagine how different our political discourse would be if the country started to talk about the economy and not race? The plan itself does not (as far as we’ve been told) start by wishing away racial inequality, but it changes the complexion of how we think about economic solutions by putting forward one that talks to structural poverty and inequality instead of tokenism and simply changing the colour of the haves.

Which doesn’t mean the tripartite alliance won’t have anything to say. There’s a lot to piss off the communist party and Cosatu, not to mention the ANC. The communists won’t like the idea of partly privatising infrastructural development. Cosatu will say something nasty about the wage subsidy. And the ANC will probably sniff at the idea of driving growth by enabling the private sector.

If the DA manages to get the country talking, forcing a response from the governing allies, this debate could rage for a long time. But for once it will not be about race, and there’s only one party that stands to make significant gains on that territory. Its headquarters are not at Luthuli House. DM