The last of Mandela’s nation 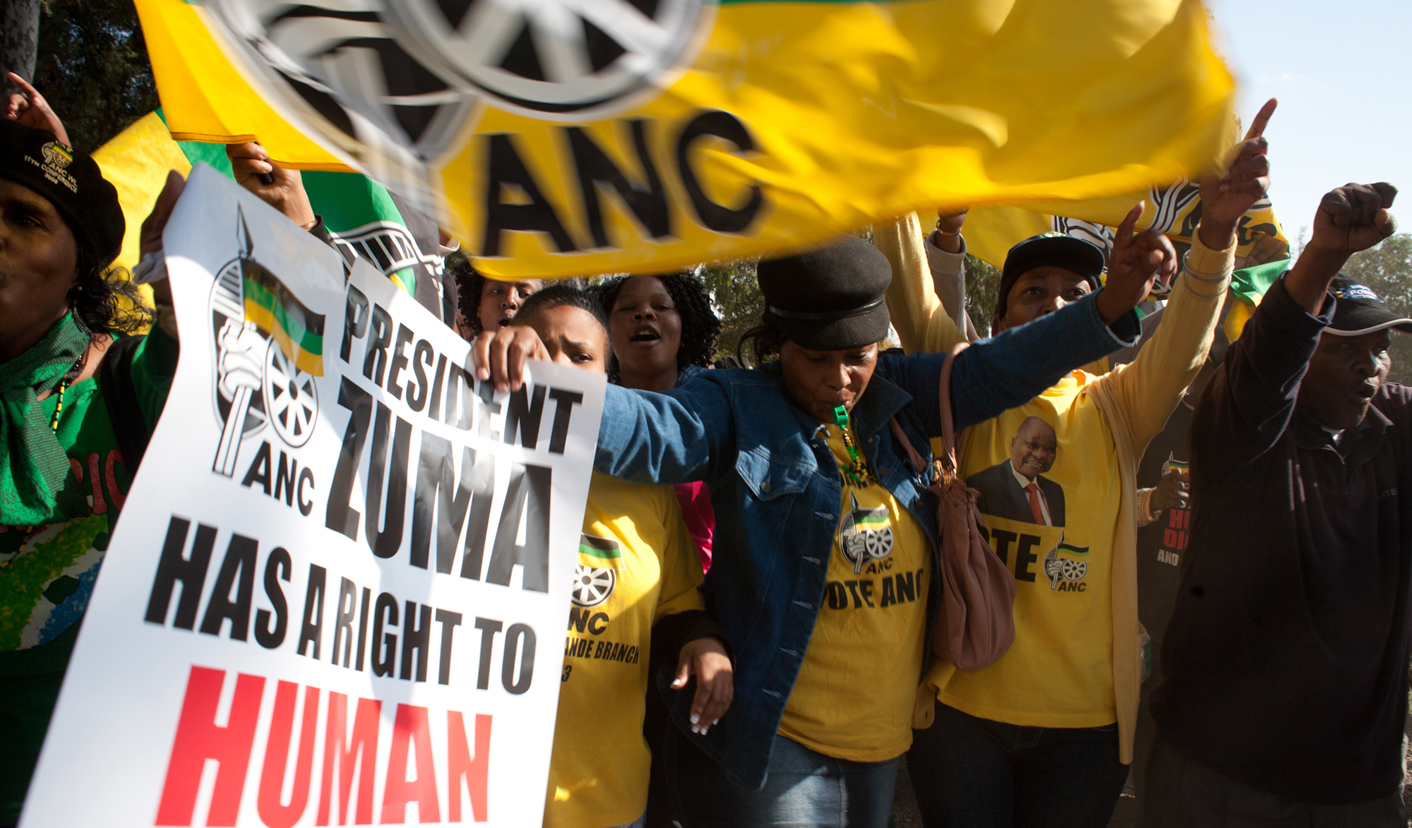 As the controversy over The Spear peters out, an opportunity is here for South Africa to assess the events of the past few weeks and what they have revealed about the country. Apart from re-uniting most of the Polokwane brigade that  carried Jacob Zuma to victory in 2007, the painting  bared a festering wound of racial animosity and anger where once there existed national reconciliation. By RANJENI MUNUSAMY.

The irony of the contrast between two mass gatherings in Johannesburg on Tuesday did not go unnoticed. At Nelson Mandela Square in Sandton, people gathered to record a birthday song for Nelson Mandela, South Africa’s greatest symbol of reconciliation and national unity, for his 94th birthday in July.

Across town, thousands of ANC supporters, led by the senior leadership of the alliance, marched from Zoo Lake to the Goodman Gallery in Rosebank in protest against The Spear painting, which had been on display there earlier this month.

On social networking sites, some people remarked on the juxtaposition between the two events, especially in light of the divisive posters on display at the march such as “Whites hate blacks” and “Draw your white father naked not our president”.

The crowd at Mandela Square was a multi-racial one, singing in harmony to rejoice another year of life of the great icon. The ANC march was mostly African, militant and spewing bile. The wrath was directed at everyone associated with the artwork, which the ANC and others perceived as promoting an attack on all African people.

The leaders who spoke on behalf of the ANC, SACP, Cosatu, Young Communist League and the South African National Civic Organisation all beat the war drums, emphasising the racial divide – because the artist is white, the subject is African and most of those who want the painting banned are black.

According to ANC secretary-general Gwede Mantashe they were there to assert the “right to defend African values and culture”. But the approach of the ANC and its alliance partners throughout the debate has been to attack, intimidate, seek revenge and manipulate the national psyche. They have now successfully scared off all the parties associated with the painting by terrorising them into submission.

Whether the painting is indeed racist and a mockery of black bodies will always remain a matter of perspective – no matter what the courts, the Film and Publications Board, the art critics and the ANC say.

It took the emotional breakdown of Zuma’s lawyer in court last week to expose how raw emotions still are over the pain, humiliation and devastation of apartheid and the lack of closure for many South Africans. Since the end of the TRC process, there has been no attention given to healing the wounds of apartheid, to nursing the scars, to making amends and to building social cohesion.

As a result, South Africa is now a shadow of the illustrious nation it was under Mandela’s presidency – a nation which triumphed over apartheid and set off on a journey to work and heal together. Since 1999, the reconciliation project was elbowed out of the way as the pursuit of power, social status and wealth became the national obsession.

And the very custodian of our non-racial democracy, the ANC, is primarily responsible for the changing nature of South African society as it knowingly abandoned national reconciliation in favour of economic transformation. The process of healing and reconciling, as far as the ANC is concerned, is something Mandela did successfully and is over and done with.

If legislation can ensure that places of learning and work become fully racially integrated, no laws can change attitudes or remove racial prejudices. Random acts of racism and prejudice which are publicised give the impression that these are out of the ordinary. Yet in homes and communities across the country, racial animosity festers and is disregarded as long as it remains unseen.

So when Brett Murray’s painting was publicised by City Press, it triggered a series of events which placed race at the centre of the debate. Ironically, it is the ANC which is screaming racism and condemning the artist’s intent to display Zuma’s flaws as being motivated by racial malice.

The ANC leaders who have led this charge and have repeatedly made sweeping statements about white people in an effort to keep The Spear controversy alive, seem not to be cognisant of how much they are further eroding Mandela’s ideals and vision for a country distinguished by national reconciliation and respect for all races.

Even if they were correct in interpreting the painting as insulting and an assault on all Africans, would “Mandela’s people” push the country to the brink by spewing racial invective or provide responsible leadership to get the nation past this divisive issue?

It is in this context that the head of the Catholic Church in Southern Africa, Cardinal Wilfrid Napier made a public call to the president to lead a national dialogue on reconciliation and dignity.

“The furore over the painting The Spear by Brett Murray has exposed a number of fault lines in our South African civic discourse. I wish to express my horror at the tone and temperament of the language around this painting,” Napier said in a statement.

He was particularly horrified by comments by a leader of the Shembe Church: “Calling for the ‘stoning’ of someone who has created an expression of his own vision is tantamount to hate speech and is a very clear incitement to violence.”

“The jump to the language of race has once again allowed us to default to the easy position of blame without having to make any effort to understand or to attempt a broader dialogue.

“Let me be clear. I don’t like the painting, its graphic subject matter or the slur on the character of the president. But simply reducing this incident to the level of race is a sad indicator that we have, once again, allowed the easy card to be played because it serves to deflect us from the real issues of national reconciliation and the building of a community that chooses the highest possible good rather than the lowest and basest human instincts,” Napier said.

According to Napier’s spokesman, Father Chris Townsend, the presidency has not acknowledged or responded to the cardinal’s call.

While Zuma was deputy president, the government launched a Moral Regeneration Movement “to facilitate, encourage and co-ordinate programmes in society that work towards restoring the moral fibre of South Africa”. The MRM was one of Zuma’s responsibilities and was meant to “co-ordinate moral renewal activities in South Africa in an effort to build an ethical, moral, caring and just society”.

Ten years later, few people know about this initiative and it has little if any resonance on the ground. It is precisely because government is failing to take the lead to build social cohesion that religious organisations have to step in and take the lead, says Townsend.

But national unity is not a “nice to have”. The Constitution states that, among the president’s responsibilities, he must “promote the unity of the nation and that which will advance the Republic”. It is perhaps then the greatest irony that it was the president’s image that caused such divisiveness and discord in the country, and did not in any way “advance” the republic.

As the remnants of Mandela’s nation progressively diminishes, there appears to be no will to preserve the elements of reconciliation which made South Africa a miracle nation.

On Tuesday, the presidency announced that Mandela had left Johannesburg to return to his home in Qunu. With the former president very frail with age, there is always trepidation when he travels and questions about whether he has adequate medical care at his rural home. And of course there are always fears about how much longer he will be with us.

One of the few consolations we have is that Madiba is probably not aware how bad things have turned out and how his nation has been broken. If Qunu can protect him from finding out how divisive the rest of South Africa has become, long may he live there. DM