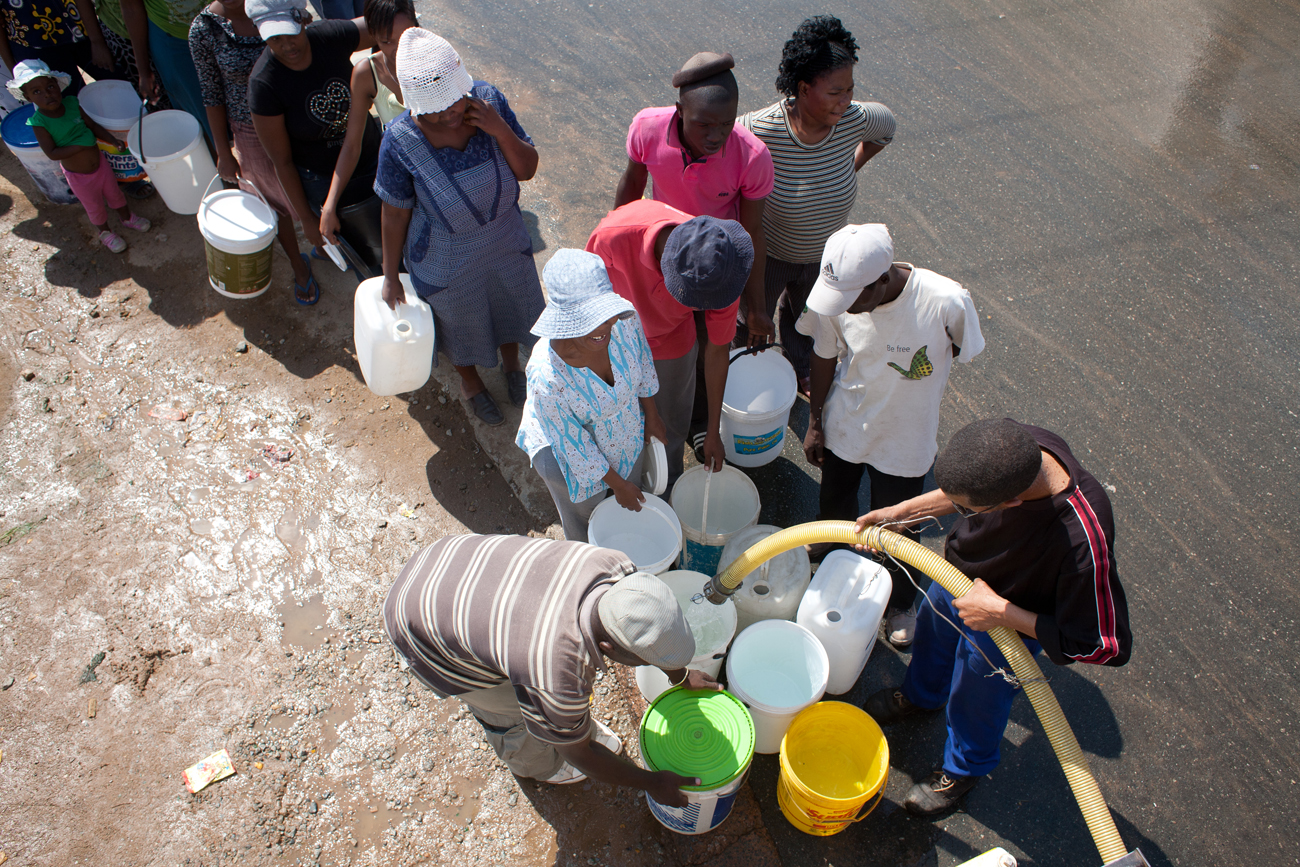 Most of Diepsloot has been without water for a week. The response has been slow and fragmented, and updates rare. Meanwhile, lives have been interrupted as the community revolves around access to safe water. By GREG NICOLSON.

Professor’s shack smells of body odour. It fills the room, suffocating the unlit space above the double bed, couch and shelf. He hasn’t showered for three days. For the last week he has been walking around Diepsloot in search of safe drinking water. He has just returned from a mall kilometres away, clenching two containers. None of the surrounding businesses on the R511 would offer their taps.

Water in Diepsloot, an informal settlement north of Johannesburg with a population estimated well above 150,000 people, was contaminated a week ago. A contractor who was upgrading sewerage pipes damaged a water line. Police warned residents not to drink the water and flyers were distributed after fears of contamination.

The first test sample was clear but the second showed traces of contamination, says Johannesburg Water spokeswoman Millicent Kabwe. Water pipes are being flushed out and after each flush a sample is tested. Water in Diepsloot West and extensions one and two is now safe to drink. All other areas are still being tested.

Kabwe advises anyone who drinks the water and has symptoms such as vomiting and diarrhoea to seek immediate treatment, but she hasn’t heard of any official reports of serious illness. No one wants to predict when the water will be safe.

Life in Diepsloot now revolves around accessing water. Men and women take turns spinning the merry-go-round in the yard of the Afrika Tikkun community centre. As long as it keeps spinning, water will be pumped from a borehole. They bring their empty drums in trolleys and wheelbarrows before bouncing home over Diepsloot’s rocky streets, a trickle of leaking water trailing behind. Photo: A girl pushes a merry-go-round at the Afrika Tikkun community centre to keep water pumping from the borehole. The centre offered water to 4,000 people on Tuesday, but its manager says the issue has been poorly communicated. DAILY MAVERICK/Greg Nicolson.

Sipho Mamize, general manager of the Afrika Tikkun centre, says 4,000 people used its taps on Tuesday. “There’s some community anger but Diepsloot is a very tolerant community,” he says. He doesn’t know when the issue will be solved, only that if there’s a need for basic services his centre will try to meet it. “It’s the councillors that I can blame.”

Diepsloot’s two councillors, Abraham Maboke and Rodgers Makhubele, haven’t addressed his area. “They should say there’s no water and when it will be fixed.”

Residents clutching an assortment of containers wait in line on the road to the councillor’s office. The water tanker has returned after running dry in the morning. Those at the back of the line hope to get to the front in time. It might be their last chance for the day. Children walk the streets. Classes at some schools ended early because they had no water.

“Water’s an essential service,” says Councillor Makhubele as residents stream through his office. They were alerted over a loudspeaker, through pamphlets and press releases to the radio after the risk was flagged, he says. But he’s vague on whether Councillor Maboke’s ward received the same information.

Makhubele says while he waits for the tests to be cleared by Johannesburg Water, efforts are being stepped up to address the issue. School children will be given pamphlets to distribute and tankers in safe areas will be sent to those with questionable tap water.

He indicates the issue has been escalated to the City of Johannesburg and Gauteng provincial government, but Daily Maverick could only confirm that some officials, such as Community Development MMC Chris Vondo, who is from the area, are involved – and then informally. Photo: Residents use wheelbarrows and trolleys to ferry containers of water. Some have to walk long distances just for drinking water. The crisis has significantly disrupted life in Diepsloot. DAILY MAVERICK/Greg Nicolson.

Paul Fairall, chairman of the Jukskei River Catchment Area Forum, was quoted in Business Day questioning why it has taken over a week to fix the system. Johannesburg Water responded by asking whether he was familiar with the company’s quality standards.

Speaking to iMaverick Fairall said, “I find it highly sinister that this matter has taken so long to sort out…To leave poor people like that without water for eight days is a disgrace.” He said there had been worse examples of contamination overseas where the water was flushed out and declared safe a maximum of 48 hours after being exposed.

If the contamination had occurred in the suburbs or Soweto, “You would have seen more action and quicker action,” said Fairall. Communication would also have been better. “This sort of thing is an exposure to possible disaster. You don’t get a spokesperson to go on air. You get the manager of Joburg Water to go on air.”

Kabwe says Johannesburg Water’s first priority is resolving the crisis. She wouldn’t comment on whether it will continue to work with the responsible contractor, but said after the issue is resolved the company will see how it can learn from the situation.

For Professor, it’s more about coping than learning. He turns the faucet he shares with another shack and looks at the “sticky” water. “Everybody’s listening,” he says. “They say you can even die if you drink it.”

He survives without electricity but needs water to live. He hasn’t been updated on the situation since the first announcements were made last week and he asks to be called with any new information. “Here, we are suffering,” he says. DM Photo: Water tankers have been providing the informal settlement of Diepsloot with water since pipes were contaminated a week ago. Long lines wait for water and inevitably there’s never enough. DAILY MAVERICK/Greg Nicolson.