The broken vows and blocked roads of Kya Sands

The broken vows and blocked roads of Kya Sands 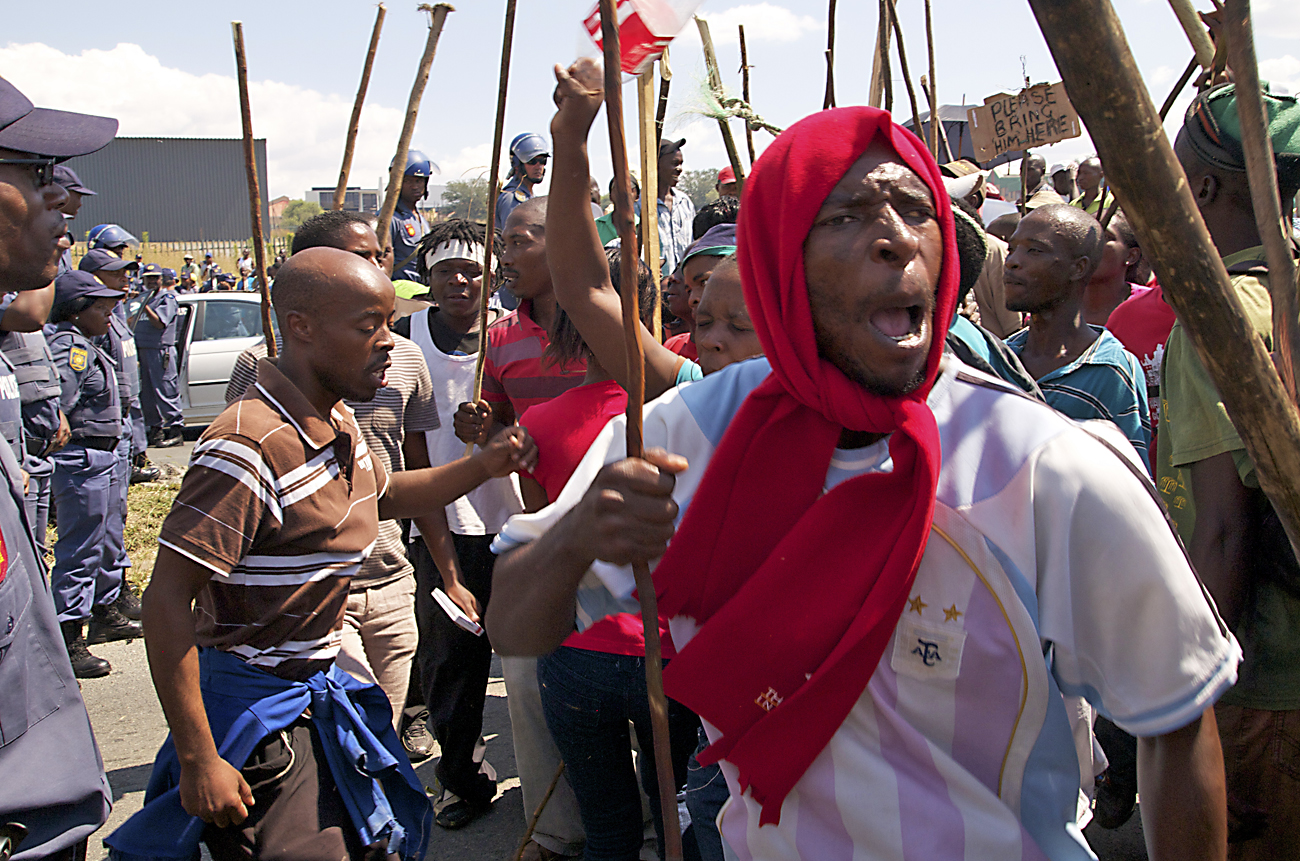 The shacks of the Kya Sands settlement sit in a valley north of Johannesburg. Every morning, residents wake to see the opulent houses on the opposite hillside. So they began Monday by blocking Malibongwe Drive, a thoroughfare to Lanseria Airport, and demanded government deliver RDP houses. By GREG NICOLSON.

Residents took to the streets after word leaked out community leaders would be meeting Johannesburg housing MMC Dan Bovu on Monday. Some of the protesters accused the area’s DA ward councillor of “selling out” for scheduling a meeting on housing without consulting the community. The group of around 100 protesters blocked every entry to Kya Sands and impeded traffic on the main arterial route, a move used to force outsiders to take notice. There was no sign the protest was about DA versus ANC politics, and Malinda Lifuwa, “general secretary” of the local community group, explained the ward councillor had only a limited ability to affect local government.

The group was protesting against being excluded from the process of building RDP houses after successive local governments failed to keep their promises. “We want to do it in our own way,” said Lifuwa while waiting for the housing MMC to arrive. In front of a line of police preventing the group, most carrying sticks, from progressing, he said he wanted Bovu to acknowledge their concerns. To say, “We’ve heard you. We’re going to build houses within two-years.” A young man yelled, “Not next year, this year!” after overhearing the comment.

Thirty-year-old Aben, who has been living in a shack in Kya Sands since 1999, said the community had been promised houses every time there was an election, but they were still waiting. Now, he said, the government was talking about building in 2017. Sitting on the curb next to the protests, he described his home. There was no running water, no electricity and the toilet shared by many people – “too many people”.

By 13:00 the crowd was growing impatient after beginning the protest at 6:00. “We heard from the media that there’s a meeting here today, but we didn’t know or approve,” said Billy Modikwe, the community group’s organiser, standing in the sun with his stick piercing a baked sweet. The people don’t trust “the leadership” anymore, he explained, and they shouldn’t have to wait all morning without eating to get the attention of their own government officials.

“The MMC is scared to face his own people. He doesn’t have answers so he’s scared to show his face,” said Lifuwa. When Dan Bovu arrived just after 13:00, one community leader swore and stormed off in rage. “We’ve been waiting since 6:00 and what time does he come? He can leave. Go!” Bovu was there to calm the situation and didn’t want to make any further promises. The community’s concerns were genuine and he would meet with its leaders next Tuesday to “give them the processes”, he told a hostile crowd wanting an immediate commitment.

The community group’s leaders said it was an attempt to diffuse the situation without addressing the issues. “I’m done with table talk. I need action,” said Lifuwa. He said they didn’t want to sit and discuss the issue because their position was clear: they want a plan to build houses in Kya Sands within two years. He said the proposed meeting was an insult as they had already submitted a petition in 2010 calling for housing, a bridge and improved roads in the settlement. “He’s going to calm the situation and after that he’s gone.”

The protesters dispersed after Bovu spoke and walked towards Kya Sands, followed by police, leaving Malibongwe Drive to finally open. There were no reports of injuries or serious damage to property, said police, some visibly tired from a day in the sun. The community leaders, however, said Bovu’s failure to outline a plan could lead to further protests. “They’ll do what they want. They don’t want leaders anymore. They might burn my shack,” said Modikwe, as the wind carried smoke from a nearby grass fire. DM