Global Occupy movement arrives at JSE - ever so briefly

Global Occupy movement arrives at JSE – ever so briefly 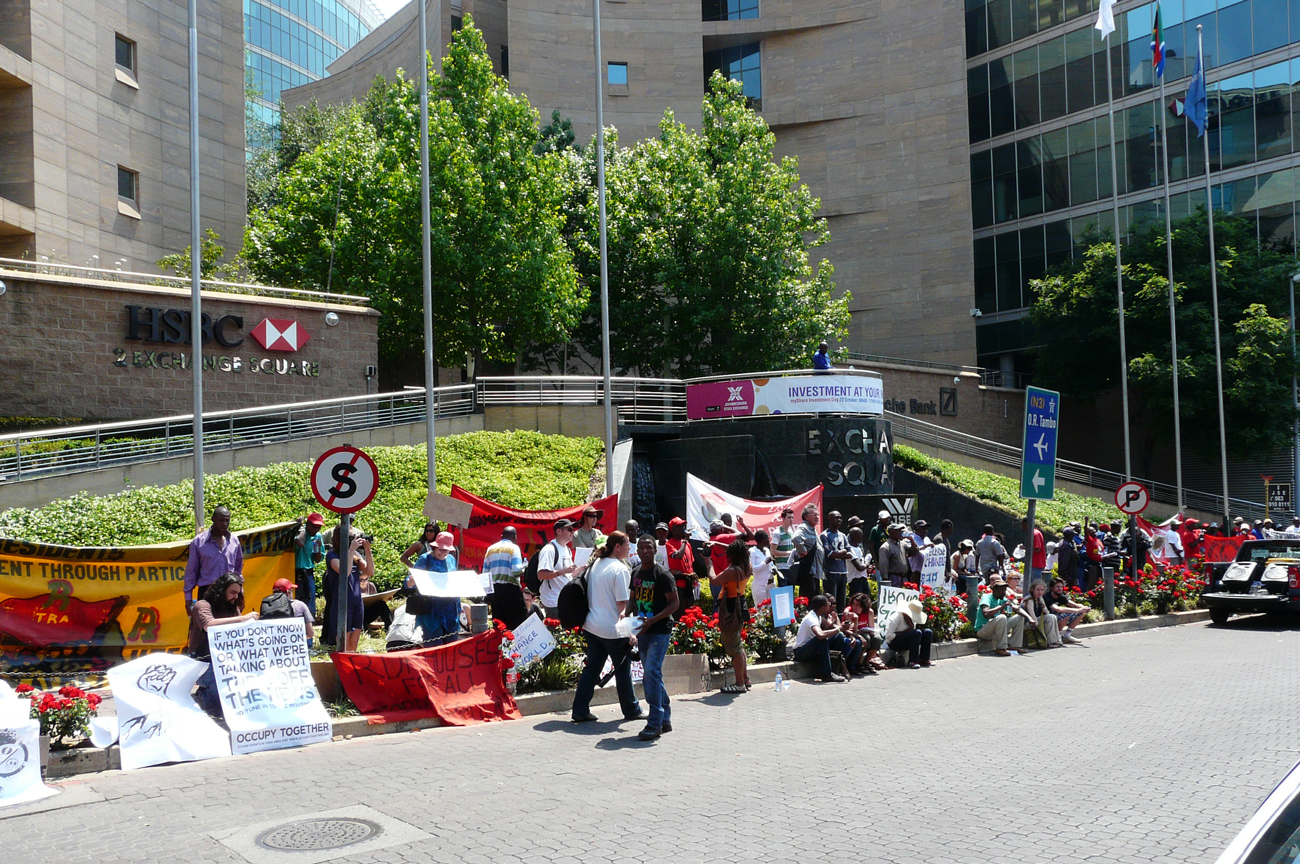 The Occupy JSE protest on Saturday proved only that the white middle class in SA has no stomach (or, possibly, no reason) for protest, and that black activists have more immediate concerns than aping a global trend. There'll be mass demonstrations in South Africa, all right, and soon, but they'll be in the home-grown mould and centred around local issues. BY OSIAME MOLEFE and PHILLIP DE WET.

The Occupy JSE protest on Saturday would have been an unmitigated disaster had it not been for the support of the black left, which had the most dubious of welcomes. As it turned out the event was only mildly embarrassing for those at its heart, neither a good reflection of what is going on elsewhere in the world, nor a preview of what Johannesburg and Pretoria can expect later this month.

In total, over two days, Occupy JSE could boast fewer than 150 participants, and that mostly crammed into five hours; the “occupation” never made it past sunset on Sunday, despite the several weeks that had been talked about before the start. Attendees on Sunday were outnumbered on the streets of Sandton by tourists wandering the streets.

In fact, had it not been for a soft hijacking of the main gather on Saturday, the entire thing may have seemed a bit foreign; a white-only group complaining about vague issues that have very little direct impact on the lives of most South Africans.

But the numbers – and the real complaints – came courtesy of The Democratic Left Front, a relatively new political party described as eco-socialist, non-sectarian, non-authoritarian and anti-capitalist. The DLF organised some of its affiliated organisations like the Thembisa Residents Association, an action group from Themb’elihle, and Operation Thiba Nyaope from Ivory Park. While the “leaderless”, mostly white and decidedly middle-class, Operation Ubuntu movement that initiated the event stood around looking mildly sheepish, their mostly black and protest-experienced counterparts from the DFL brought the singing, the dancing, and the gear. While most of the white crowd had not made provision for even so basic as sunscreen, the DFL brought an entire public-address system. Not everyone approved.

Alexander Moulin, one of the protesters aligned with Operation Ubuntu, expressed reservations about the DLF’s presence. He insisted the Occupy movement must not be politically aligned. The DLF is a young political party looking to make a name for itself, Moulin said. Others agreed saying the DLF had “hijacked” their protest. The DLF, for its part, was more open. Its organisers put together an impromptu list of speakers to address the protesters and allowed anyone who was interested to speak using their PA-system. They then proceeded to complain about the issues that have seen their members in the streets for a decade: housing, electricity, and other basic systems. Operation Ubuntu protesters held up signs  from the global Occupy movement’s resource centre, proclaiming them as part of the oppressed 99%, or warning “fat cats” to watch their backs. Residents from Tembisa asked for solar panels, so they could have affordable electricity.

There was some efforts at reconciling the two world view. Dehon Joubert appealed to his fellow Operation Ubuntu members to understand that others there had been involved in social protest for longer. He said they should be looking to learn from the DLF instead of accusing them of hijacking the protest. But that respect was not necessarily reciprocated. Andile Mngxitama, organiser of the September National Imbizo movement and part of the DLF contingent, wrote later on his Facebook page: “Went to Jhb symbolic occupation of the JSE. There were some communities from Soweto and Thembelihle. There were lots of arrogant racist anti-black whites from the ‘occupy’ call. Those people are still our enemies. We occupy the occupation!”

“Occupation” is a mighty strong term, though. Organisers from both groups said they had applied for permits to protest, but had received no replies; Metro police spokeswoman Edna Mamonyane told the Daily Maverick on Saturday morning that she was aware of the protests, but said no permit application had been received. With some negotiation it was agreed that as long as the protesters did not obstruct the flow of traffic, they’d be allowed to do their thing until lunchtime. The majority complied, the group rapidly dwindled, and efforts at a reboot on Sunday failed miserably. Which did not stop some from proclaiming the event a success on social media networks. (See Chris Vick’s earlier column in Daily Maverick referring to this as waging class struggle the Playstation generationway.)

As they left, white demonstrators said they had to go feed their pets, joked about caffein withdrawal, or said they had social obligations. Some promised to be back, some took proudly-smiling pictures of themselves. Those who had travelled in from distant townships said they had families to look after, or jobs to get to, or local protests to plan. “I can’t afford to stand here all day doing nothing,” said a young man who, weeks before, had been involved in violent battles with police in Themb’elihle.

In South Africa, it seems, there is nobody with the combination of commitment, anger and ability to actually pull off an occupation. But our national past time of marches, now that we’re good at. And less than two weeks from now a series of marches will demonstrate what it is South Africans feel aggrieved about.

The ANC Youth League may be plagued with internal strife, but its planned marches (including one on the JSE) will almost certainly draw many thousands of participants at the end of October. That will not be a passive group holding up placards or quietly talking about the unfairness of the capitalist system. It will be a surging, chanting, unified, and perhaps even disciplined mass of people, with  a specific plan of action. They will not call on companies to mend their evil ways, or profess a belief that the world would be so much better if everybody just loved everybody else. They will demand intervention from a government they believe is failing them – the real 99%.

It is almost as hard to imagine Operation Ubuntu joining forces with the ANCYL as it is to imagine that either group will actually improve the lives of the majority of South Africans through their actions. But at least one will be a genuine expression of discontent, rather than a withered cutting from a foreign plant. DM