Cell C’s buzz helps it eat into Vodacom, while MTN holds its ground 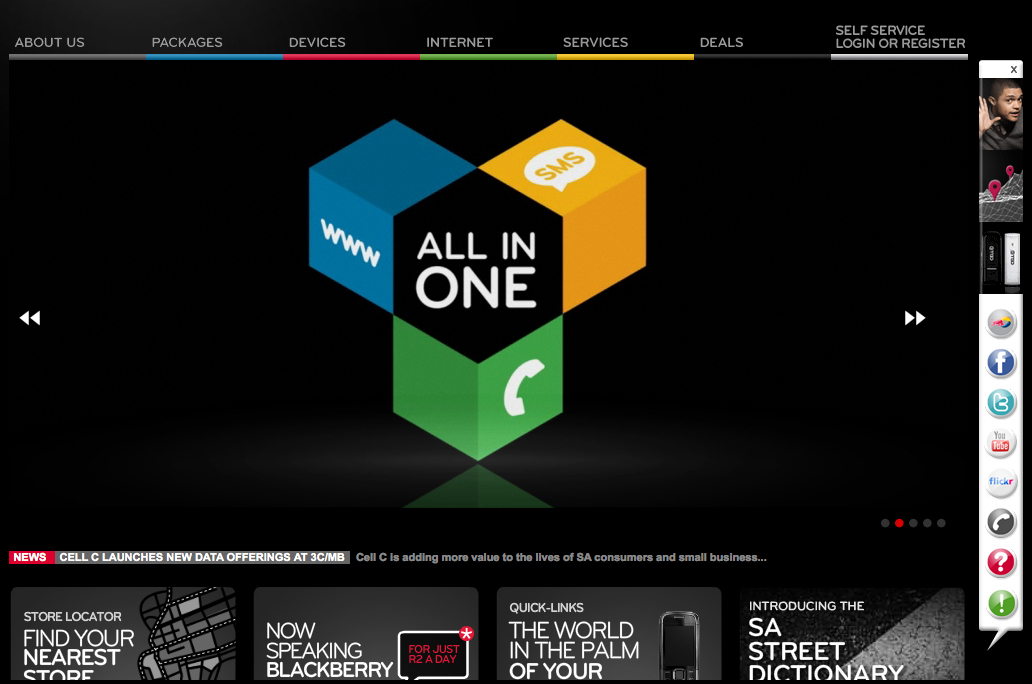 Seven months on, Cell C has released some vital statistics that give us the data to compare its 2010 performance with those of Vodacom and MTN – and the news is mixed. Some of its big investments are paying off and the third operator is finally finding its feet. But that was before Telkom's 8ta became the new newcomer, of course. By PHILLIP DE WET.

Cell C didn’t do badly during 2010, all things considered. It made more money from more customers, which isn’t a bad trick in a market as saturated as the South African one.

It turns out that the massive, expensive and sometimes controversial, advertising campaign it launched during the last half of the year (and probably its strategy of undercutting everyone else on Internet packages by the simple expedient of charging below cost) helped it win over customers from Vodacom especially. MTN, with its World Cup sponsorship, though, stood up well to the challenge.

Compared to the year before, Cell C says its customer base grew by 12% to 8.2 million. During that same time period MTN grew its South African subscriber base by more than 17%, to 18.8 million. Vodacom was the loser, with 1.8 million fewer customers in SA at the end of the year than it started with, a 6.6% decline. Not that the now-red company is hurting too bad; MTN and Cell C combined are still only barely larger than Vodacom on its own.

Cell C extracted around R100 from each of its customers a month, on average, during the year, a not-insignificant 6% increase a head in a sector that has downward price pressure when it is not engaged in actual price war. Vodacom, with its relatively high proportion of contract subscribers from the early days of cellphones, when the big spenders signed up, manages to part each customer with an average of R165 a month.

What Cell C does have going for it are some interesting ways of financing its aggressive rollout of infrastructure. The China Development Bank is providing a loan for all the equipment it is buying from Chinese company ZTE, at what we can only presume to be cut-rate, export-encouraging interest.

Cell C also cashed in on some its existing infrastructure. Selling its cellphone towers to a US giant, the American Tower Corporation (which specialises in leasing out telecoms and broadcasting towers to multiple companies at the same time, very profitably), brought in the better part of $200 million for Cell C, with the possibility of more to come as the company builds more base stations. Cell C was paid just under $150,000 for each of its towers. In a deal during the same period between the same US company and MTN Ghana, MTN got $116,000 a tower – and it still owns 49% of each, thanks to a joint venture structure. Not that either did particularly well, considering that American Tower paid more than $350,000 on average for the thousands of towers it bought in recent months.

Just how much capital Cell C can raise through such deals becomes critical this year and next. Telkom’s new cellphone operator 8ta is keen to shake up the market just as everyone is laying the groundwork for the future: high throughput connectivity for always-on devices, the smartphones and tablet computers the operators hope will sell by their millions. Anyone who falls behind in the speed or coverage race could be in for trouble. MTN and Vodacom have an effectively unlimited amount of money to pour into infrastructure in SA. 8ta needs to convince its parent company to fork over the money. Cell C, by contrast, needs to convince everyone from bondholders to customers that it is a contender. At the end of 2010 it was convincing. Pity we don’t yet know how it fared in the first half of this year. DM